What do You Need to Know Before Buying a Dogo Argentino?

The Dogo Argentino was developed in the late 1920s and became the first recognized Argentinean dog breed. It remains the only dog breed native to Argentina. They are powerful dogs that have an intimidating appearance, and their fighting history has given them a reputation for aggression. Despite this, when raised properly, they are a friendly and happy canine. They can be a faithful family companion to owners willing to spend time on training and regular exercise.

The Dogo Argentino has black-spotted skin covered in pure, white fur, although some have dark spots on their faces. They grow to 23-27 inches at the shoulder and weigh between 80 and 100 pounds. The dogs are high energy and are known for having a good scenting ability, which can make them easily distracted by interesting smells. Their deep chest, muscular body, and strong jaw all helped them with their original job of hunting game. 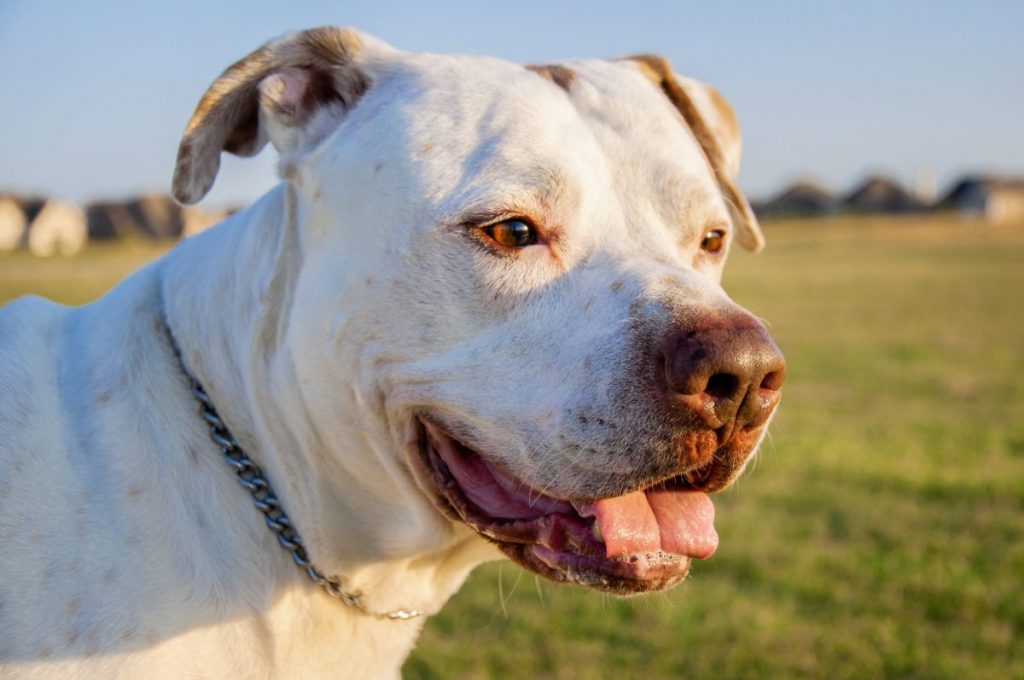 The Dogo Argentino was developed in the Cordoba region of Argentina by Dr. Antonio Nores Martinez. He bred several breeds including mastiffs with the local old fighting dog of Cordoba, a breed which is now extinct. Dr. Nores Martinez took his dogs hunting with him, where they quickly demonstrated their skill at bringing down big game such as wild boars and pumas. He then concentrated on bringing out their fearlessness and the ability to navigate Argentina's terrain. 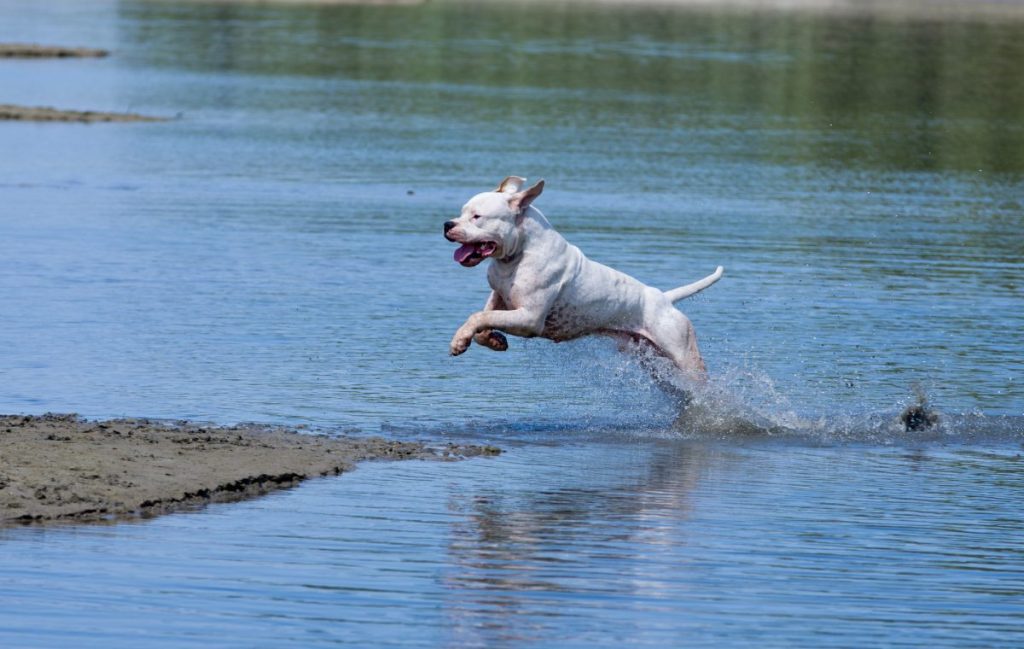 The Dogo Argentino was bred with fighting dog stock, but owners worked to breed out aggression towards other dogs so that they could hunt together in packs. Despite this, their strength and fearlessness have made them popular in dog hunting rings, and they have a reputation for aggression. Like most dogs, with proper training and care, they are not dangerous; however, their association with dog fighting has seen them banned or restricted in many countries including Australia, New Zealand, and the United Kingdom. 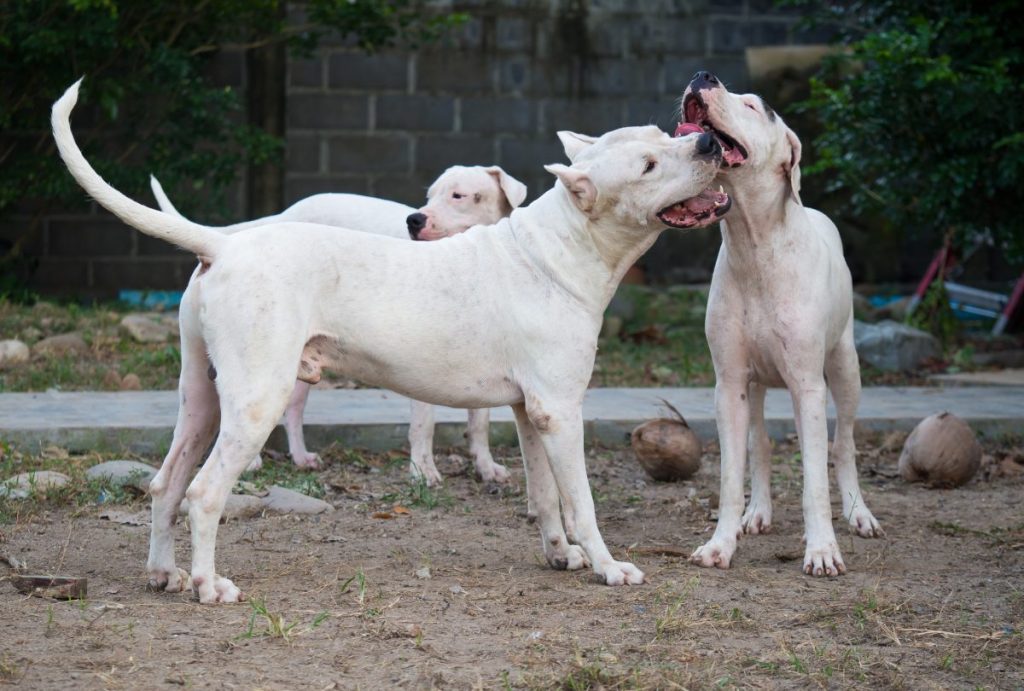 Dogo Argentinos are hunting dogs and have a strong prey drive. This means they may chase cats or smaller dogs and need a tall fence to keep them in their yard. They may also be better in a household without cats. On the positive side, they look imposing and can help owners feel safe even though they are generally friendly. They are also good companion dogs who love leaning against their humans and getting petted. 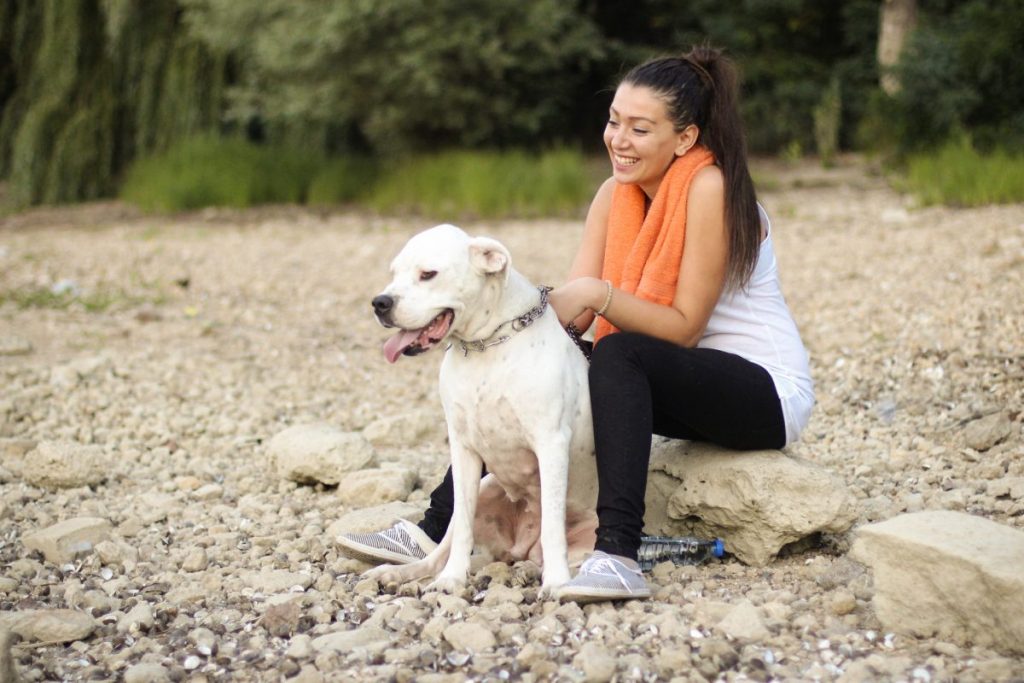 Personality of the Dogo Argentino

The Dogo Argentino was bred to be tenacious in order to catch their prey, and this can lead to stubbornness. They are gentle towards their family and love being close, but can easily spring to being a fierce protector when the need arises. They can be independent and strong-willed, so need a firm and experienced owner. Although they can be wary of strangers, they are welcoming towards guests their owner brings to the home and are generally cheerful and friendly. 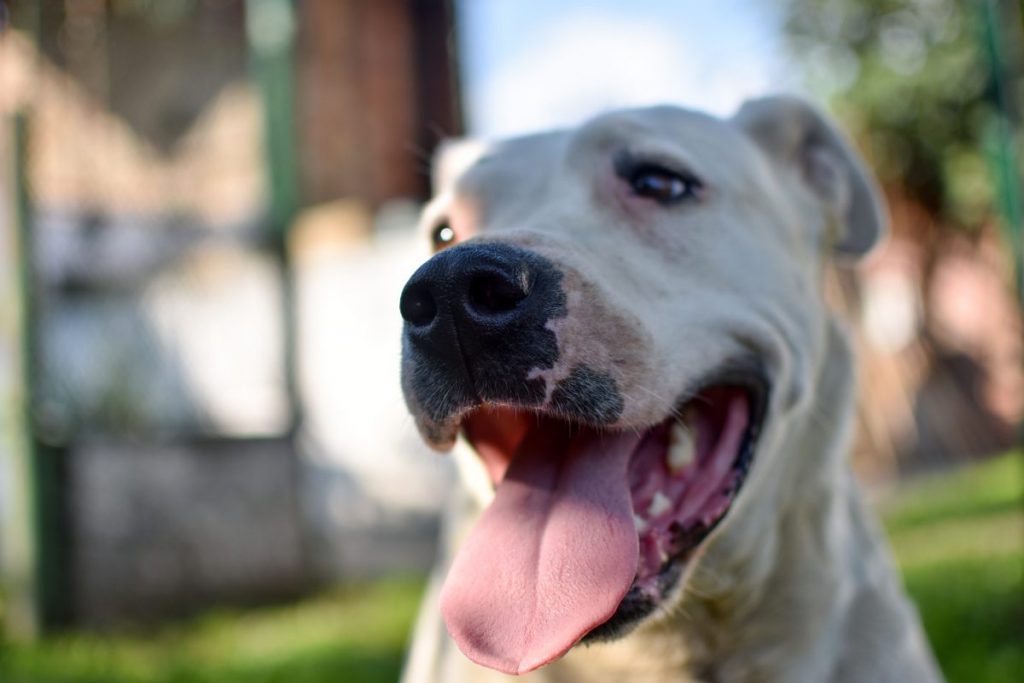 Dogo Argentinos are hunting dogs, bred to run long distances and run down prey. As such, they need a lot of exercise. Most breeders recommend at least 60 minutes each day, and to truly exhaust them it is better to find somewhere they can run off lead or play fetch in a safely fenced area. Dog sports such as agility and weight pulling can also help wear them out. Dogo Argentinos that have had enough exercise are happy to relax once they return home. 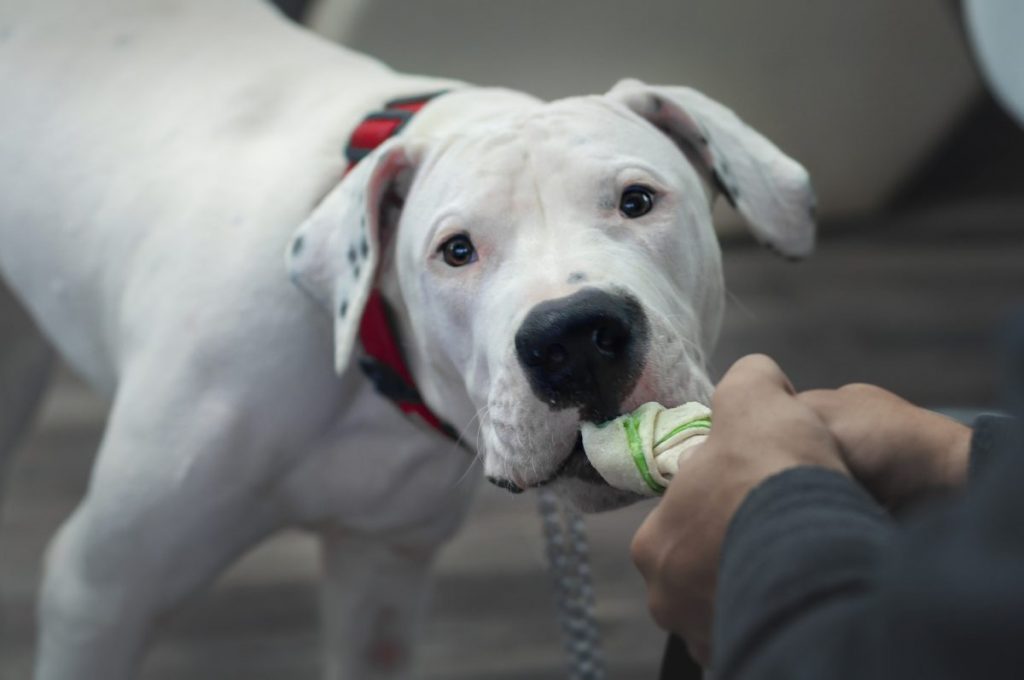 Care and Feeding of the Dogo Argentino

Dogo Argentinos shed lightly and lack a strong doggy smell. A quick brush each week and a bath, when they get dirty, is all that is needed to keep them looking clean and smelling fresh. They have strong nails that grow quickly, so owners need to keep them trimmed to prevent breakage. As puppies, they benefit from specific large-breed puppy food, as this helps them grow slowly and prevents the development of joint problems. Adults should have a diet that supports their high level of activity. 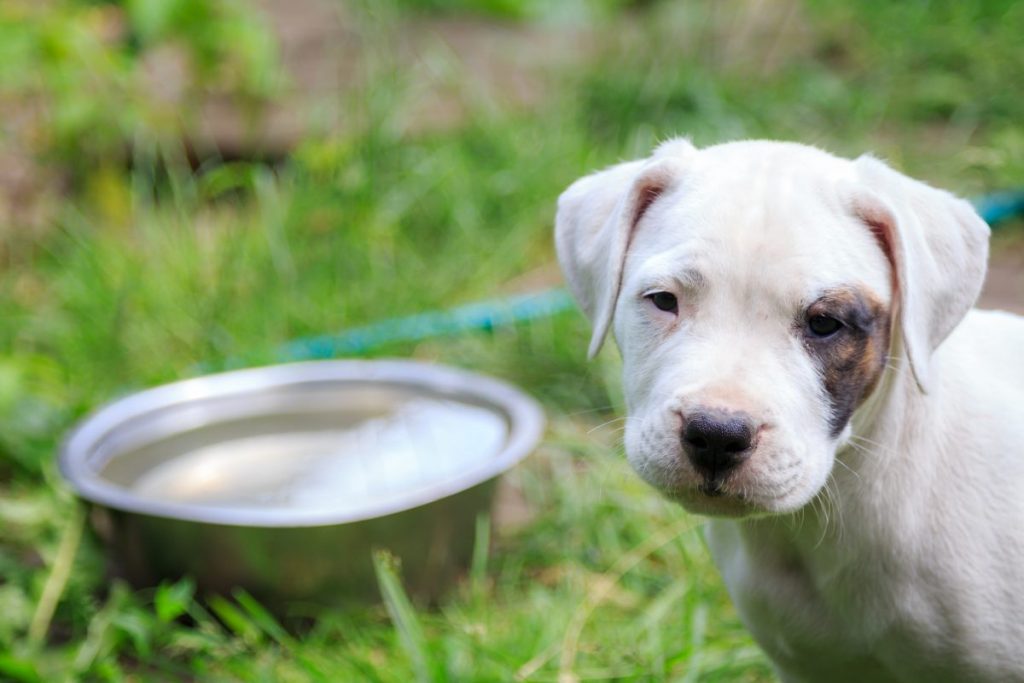 Dogo Argentinos are generally very healthy. Like other mostly-white colored dogs, they can be afflicted by pigment-related deafness. This affects about 10% of Dogo Argentinos and can cause deafness in one or both ears. As a large dog, they may also suffer from hip dysplasia. Their white fur makes them prone to sunburn, and so owners should make sure they do not spend too much time in direct sunlight. 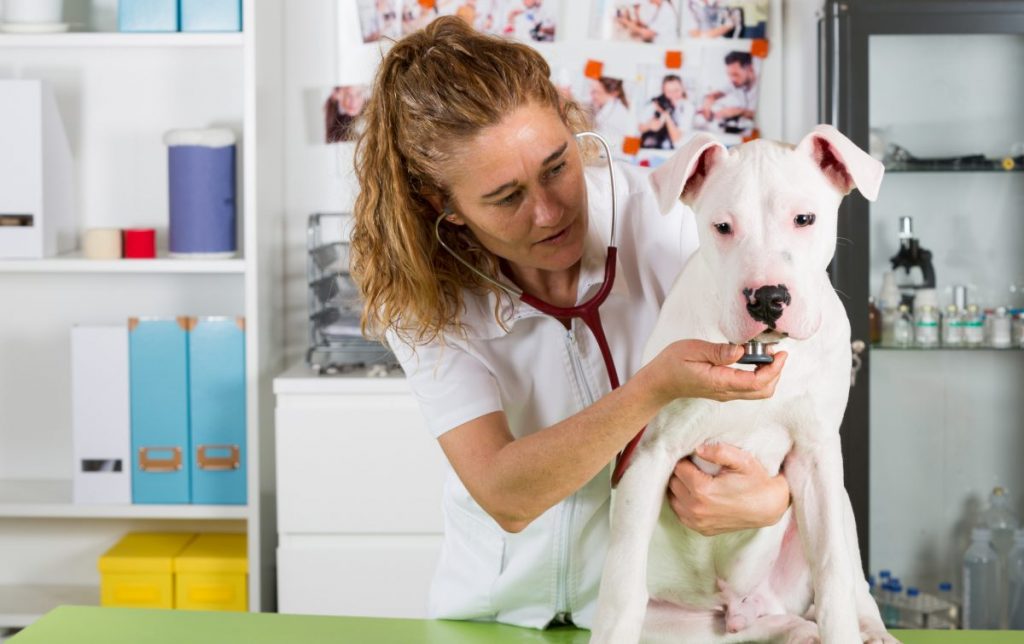 The Dogo Argentino at Work

The Dogo Argentino is a working breed, and many are still found earning their living. They make a natural guard dog and are found in police K-9 units in the United States and other countries. They have also been trained for search and rescue work and as guide dogs and some work alongside the military. Although some people think their need for a strong handler makes them a bad service dog, their loyalty can make some ideal for this role. 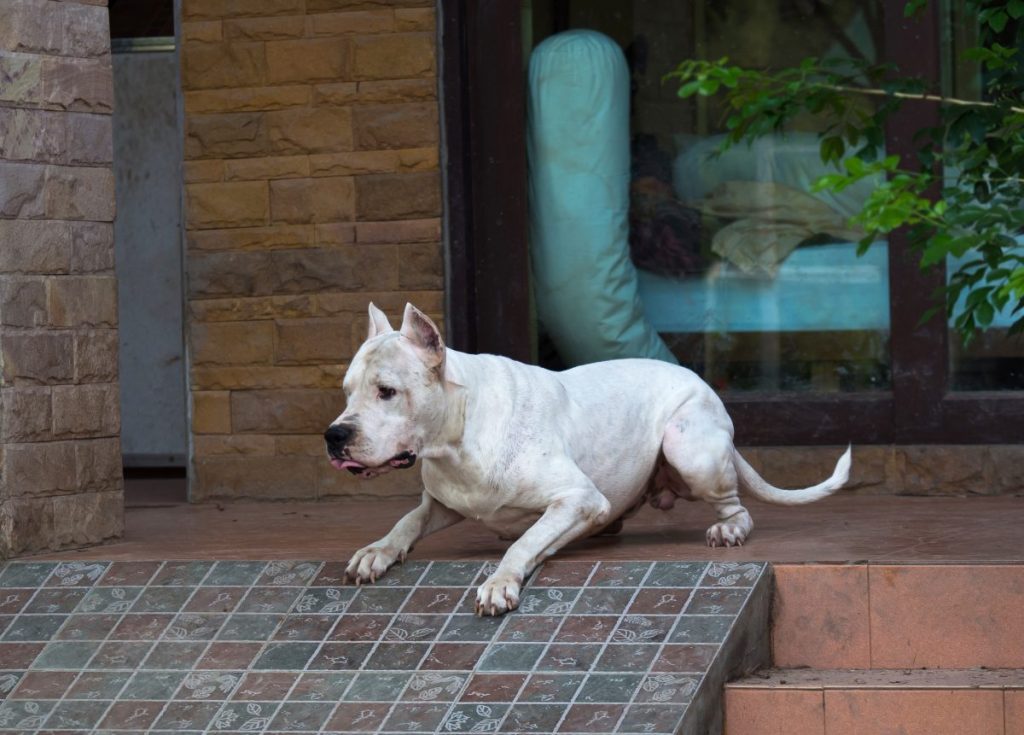 The Dogo Argentino can be an affectionate and protective member of the family. They need early socialization and training to ensure they can get along well with other people and animals. They generally love the children in their family fiercely and have been known to commit heroic acts to protect them, including subduing pumas. Their high prey drive makes them best suited to homes where there are only other large dogs, or they are the only pet. 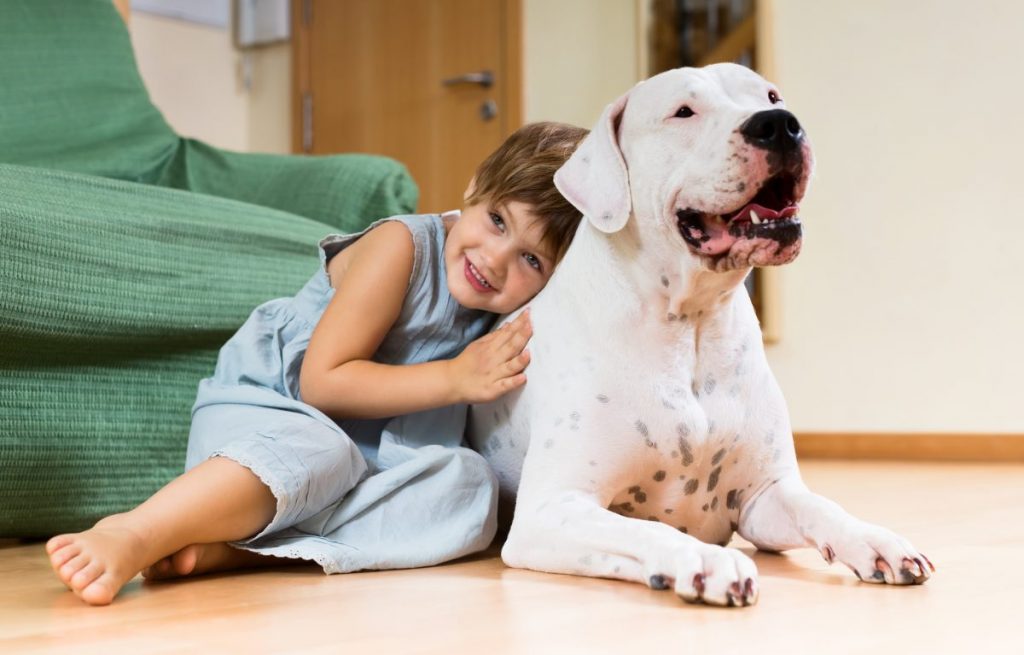