What are the Signs of Bloat in Dogs?

Everyone has felt a little bloated after a big meal, so when someone tells you that their dog has bloat, it's easy to dismiss it as a not-so-serious condition. Unfortunately, for dogs, the condition known as bloat can be incredibly dangerous and even fatal. It can occur to any dog, although some breeds are more prone to it than others, and may happen suddenly, with no warning signs that something is about to go wrong. Prompt treatment is critical, so every dog owner should learn to recognize the symptoms of bloat in dogs.

Bloat is the common name for a condition known as gastric dilatation and volvulus or GDV. GDV occurs when a dog's stomach begins filling up with gas, which causes it to expand and swell. This puts pressure on the dog's lungs and other organs, which can cause difficulty breathing and other problems. Eventually, the stomach will flip and twist, which can damage the walls. Bloat is a very dangerous and painful condition that will ultimately be fatal without treatment. 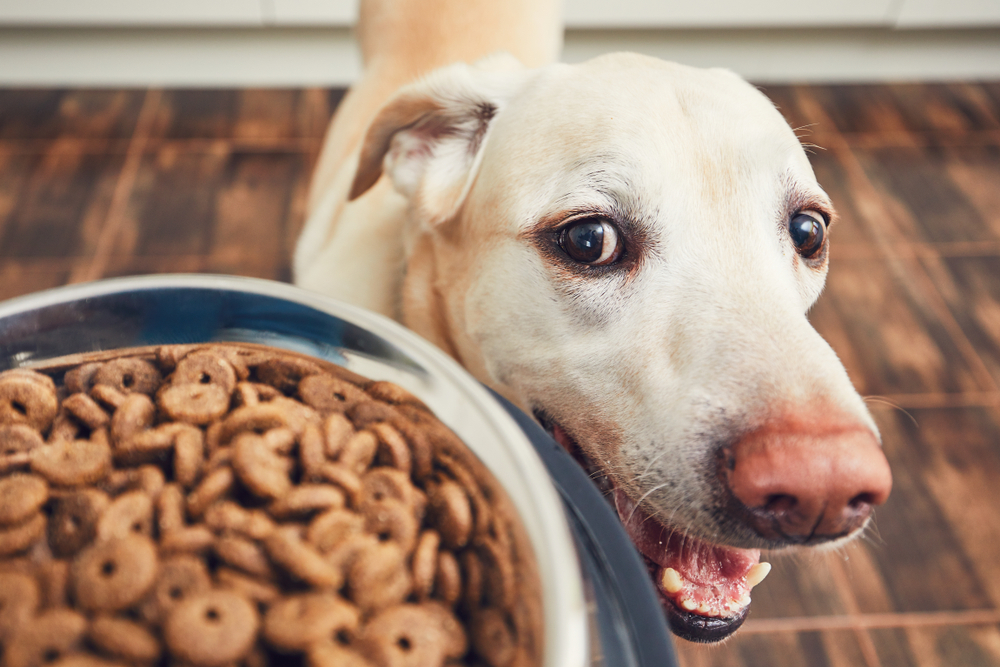 No one is quite sure what causes bloat. It seems to be linked to the dog's conformation and genetics, as dogs with deep, narrow chests and a family history of bloat are more likely to experience it. Eating large volumes quickly, such as when a dog is stressed and rushing to finish a meal, is a common trigger for episodes. However, it can occur in any dog or any situation. 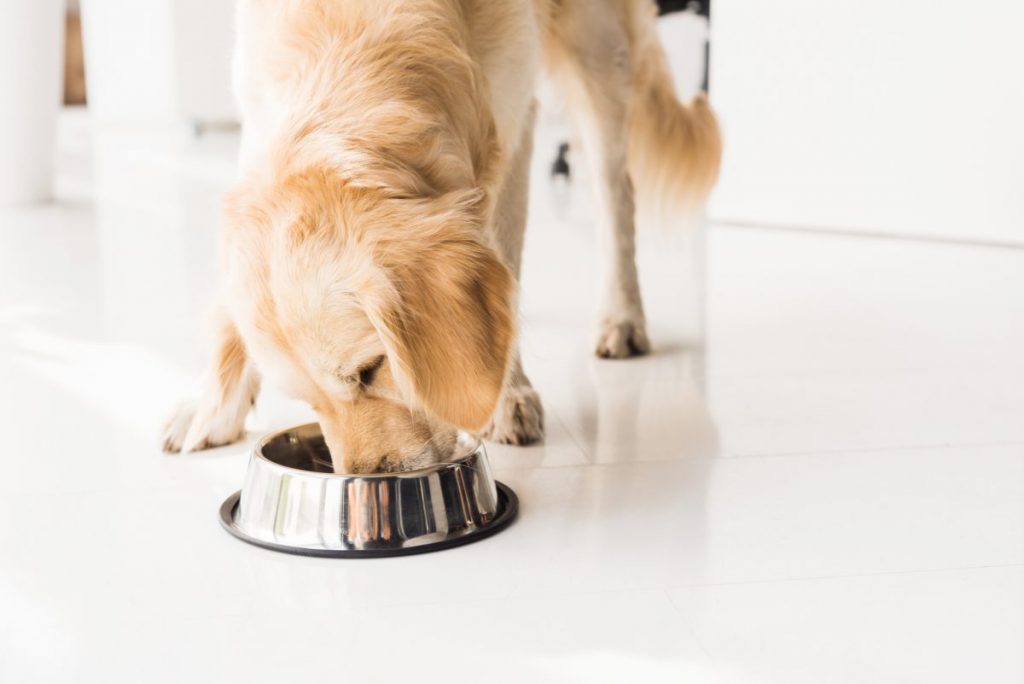 The Symptoms of Bloat

Bloat has a few telltale signs that make it fairly easy to recognize. The dog's stomach will usually become visibly swollen or distended, which is where the disease gets its name. Most dogs show signs of physical discomfort or pain, such as pacing, restlessness, and excessive drooling. Rapid breathing and heavy panting are also common. The dog may attempt to vomit, but nothing or only a small amount of yellowish, foamy bile will come up. 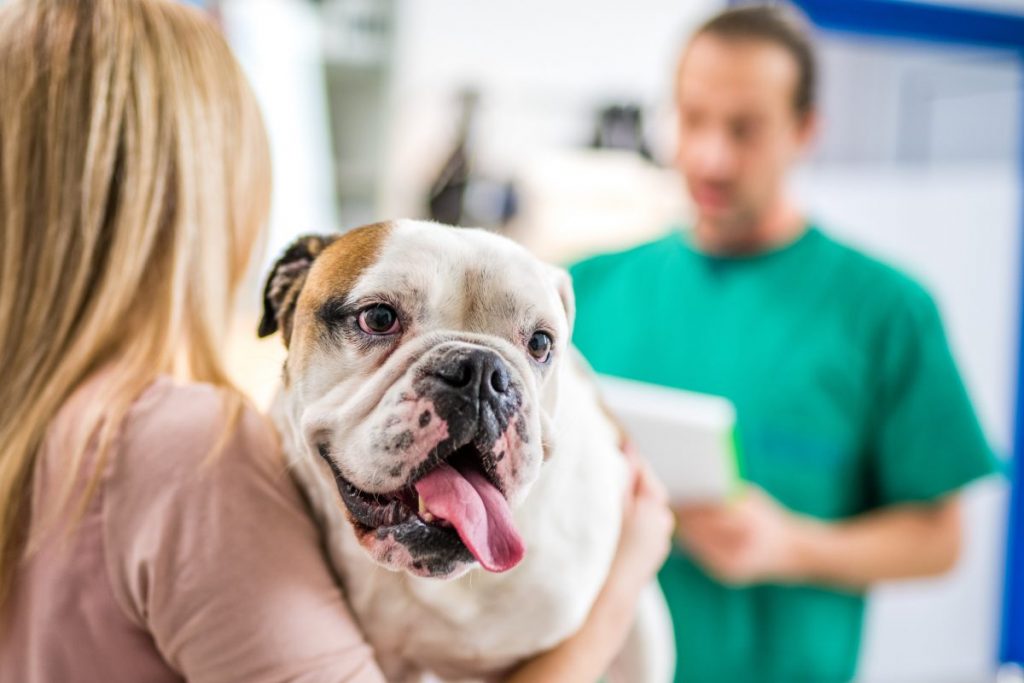 How Is Bloat Treated?

Bloat causes significant pain and distress and dogs experiencing it often go into shock. The first thing a veterinarian will do is treat the dog for that and get the dog's vitals to a stable place. Once that occurs, the veterinarian will perform surgery to release gas from the dog's stomach, untwist it and remove any damaged tissue, which could lead to sepsis if left inside. Surgery is the only treatment available for bloat. 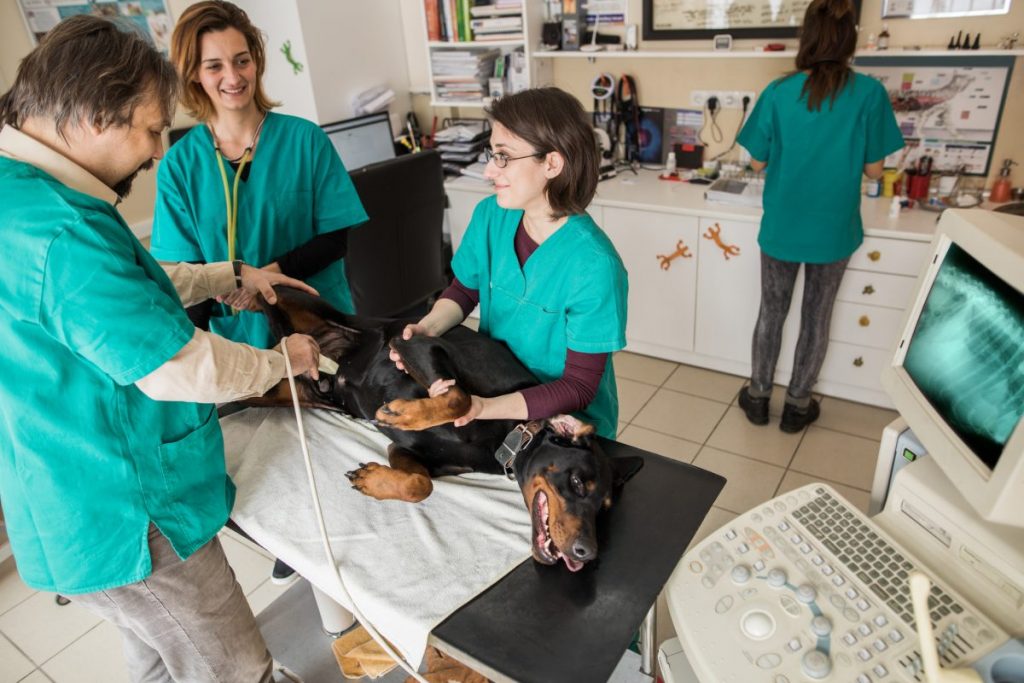 Since fixing GDV in dogs requires major abdominal surgery, there is a significant amount of aftercare involved. Dogs typically need to rest and have limited exercise, which may be difficult for high-energy dogs. They typically need pain medications and may need antibiotics if there were complications that may lead to infection. Most dogs will also need a new diet and meal routine to help reduce the chance of future bloat. 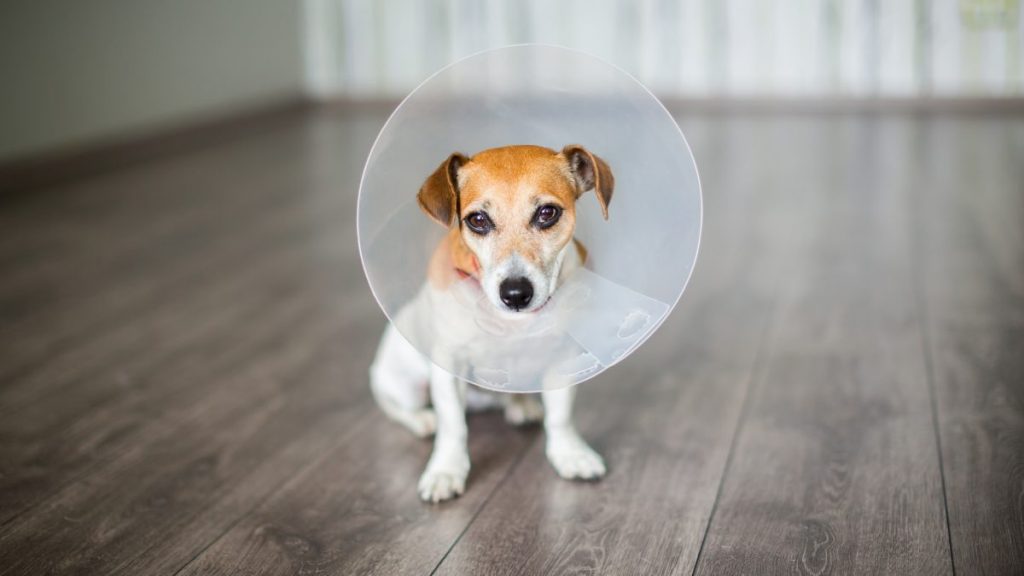 What Is the Prognosis?

The chances of a dog recovering from bloat depend on how soon you can get to the vet. However, even with prompt veterinary care, about 30% of affected dogs die from GDV either before or during surgery. GDV is always fatal for dogs who do not receive veterinary treatment.

If the dog survives the surgery, then they have a very good chance of living a long, healthy life, particularly if the owner takes steps to reduce the chances of another incident of bloat occurring. 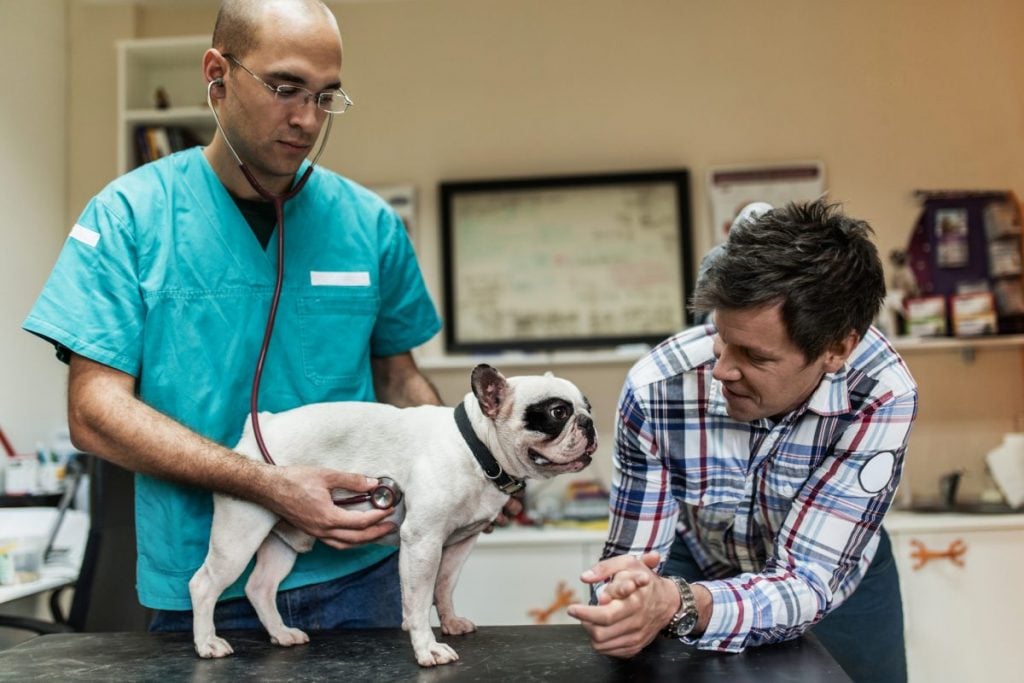 Although any dog can get bloat, it is most common in large or giant breeds, including Great Danes, greyhounds, Dobermans and Saint Bernards. It is more common in males than females, and the chances of it occurring increase in middle-aged or older dogs. Dogs who have had bloat before or are related to dogs who have had bloat are more likely to experience it.

Eating style also seems to have an impact. Dogs who are stressed around mealtimes, such as by having to compete with other dogs, are more likely to get it, as are dogs who eat large amounts quickly. 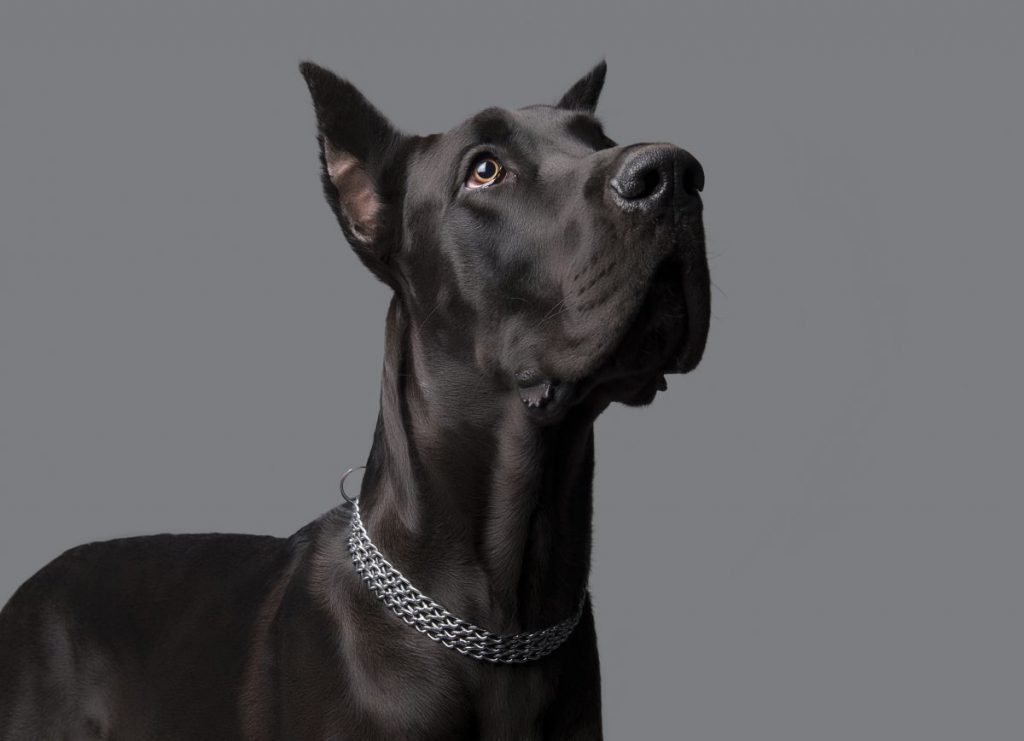 Preventing Bloat in Your Dog

There is no sure-fire way to prevent bloat, but some easy management changes can help reduce the risk. Try to keep your dog's mealtimes as calm and relaxed as possible. If you have multiple dogs, consider feeding them separately or at least a good distance apart from each other to keep things quieter and less competitive. Try to break up your dog's meals into two or more small ones instead of one large one, and consider feeding from elevated bowls instead of directly on the ground. Dry kibble diets may also play a role, so talk to your vet about an alternate diet if your dog has a high risk of bloat. 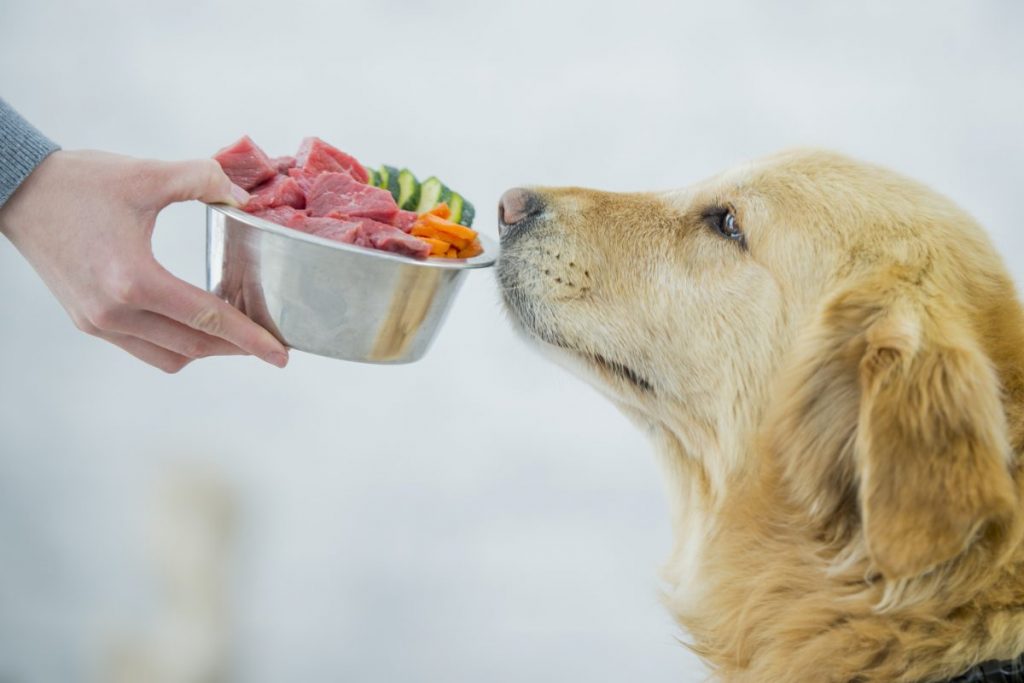 Another preventative measure that can be done is a surgical procedure called a gastropexy. This involves permanently attaching the stomach to the wall of the abdomen, which helps prevent it from twisting. This is routinely done while performing surgery to fix a stomach that has already bloated, but some veterinarians also recommend doing it when high-risk dogs are spayed or neutered in an effort to prevent bloat from ever occurring. However, there is some debate over this practice in the veterinary community, and it may not be suitable for all high-risk dogs. 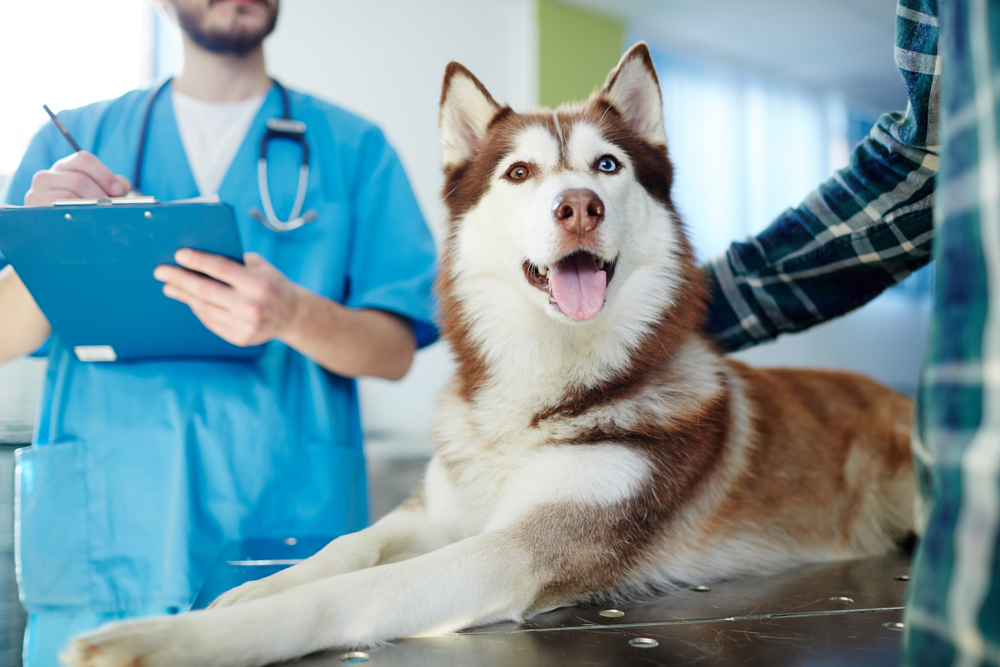 Some other conditions can cause symptoms similar to bloat. A dog who eats too much might have a slightly bloated-looking stomach, but if there is no pain or vomiting, it may not be actual bloat. Sometimes dogs can get intestinal blockages from eating certain items, such as socks or corn cobs, which may cause similar pain and vomiting and require emergency care. If you are ever unsure of whether your dog is experiencing bloat, err on the side of caution by calling your vet immediately. Delaying treatment can be fatal. 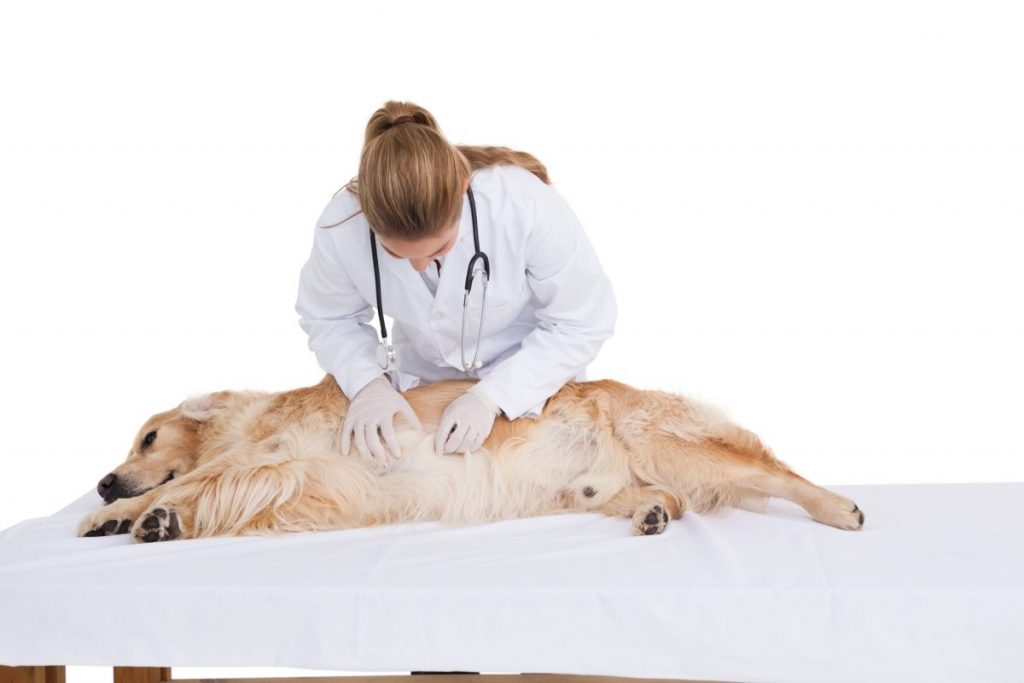