Saltwater Fish for Your Aquarium

Keeping saltwater fish can be more difficult than freshwater fish, but it’s well worth the effort. When choosing saltwater fish for your aquarium, it’s important to consider factors like temperament, hardiness, diet, compatibility, price, and space requirements. Whether you’re just starting out or have a bit of experience under your belt, there are many beginner-friendly options that are easy to keep and will add a dash of color and liveliness to your saltwater aquarium.

The brightly-colored clownfish is one of the most popular saltwater aquarium fish. This type of fish is also really easy to care for, making it an excellent choice for beginners. Clownfish are easy to mate, especially if you buy a pair together, and will continue to spawn throughout their lives. Clownfish are active but also somewhat territorial; once they’ve established themselves in an area of your aquarium, they’re unlikely to stray far from that region. Food for clownfish is easy to find in stores, and tank-raised clownfish will be accustomed to eating hand-fed food. 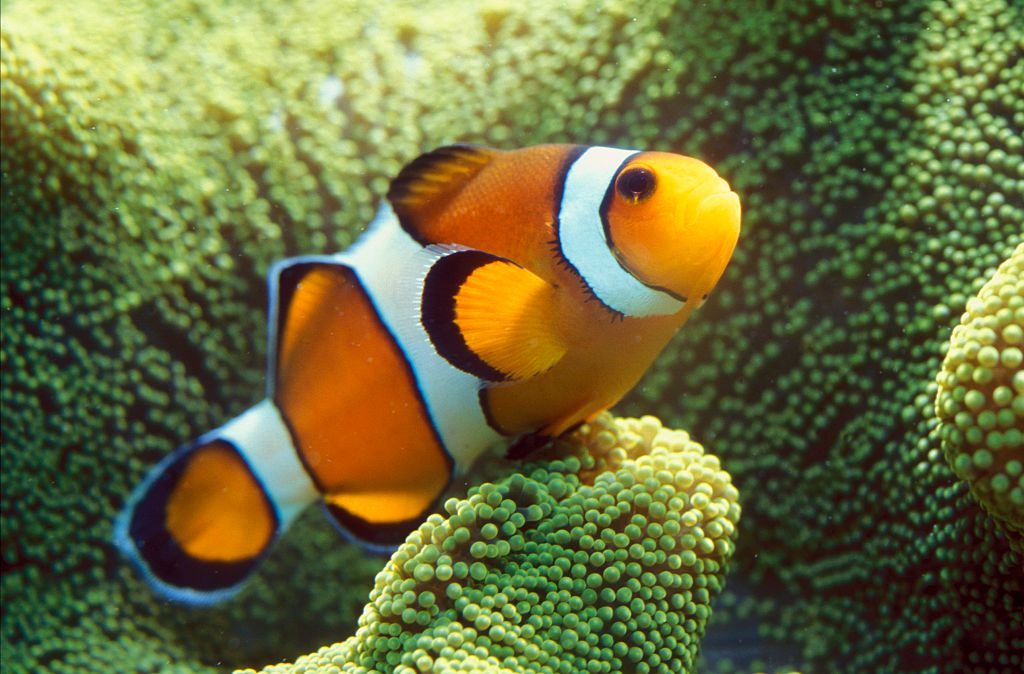 The damselfish is another stunning, brightly-colored fish. The yellowtail damselfish is also less aggressive than some other varieties. They tend to leave invertebrates such as corals alone, and most damselfish will get along with others just fine as long as they have plenty of hiding space. Damselfish are hardy and adapt well to tank life and hand-fed food. 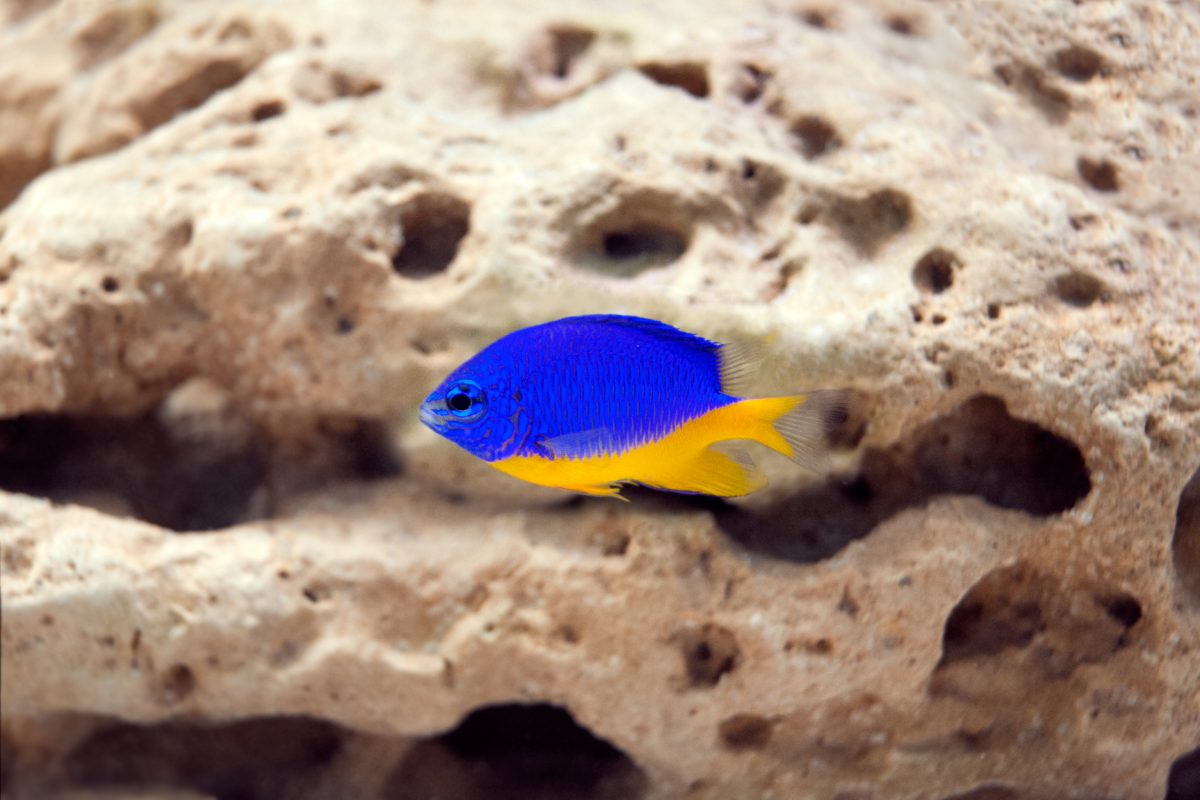 The watchman goby, also known as the shrimp goby, is a low-maintenance fish well-suited to aquarium life. There are several different types of watchman goby, including the diamond watchman goby, pink-spotted watchman goby, and the yellow watchman goby, which is the most popular. Gobies aren’t picky eaters, and food for them is easy to find in stores. Ideally, you should feed them a variety of shrimp and food for carnivores. Gobies require a 30-gallon tank with a tightly-fitted lid, as they’re prone to jumping. They tend to be fairly peaceful and will get along with other fish species, but shouldn’t be in a tank with another goby unless they’re a mated pair. 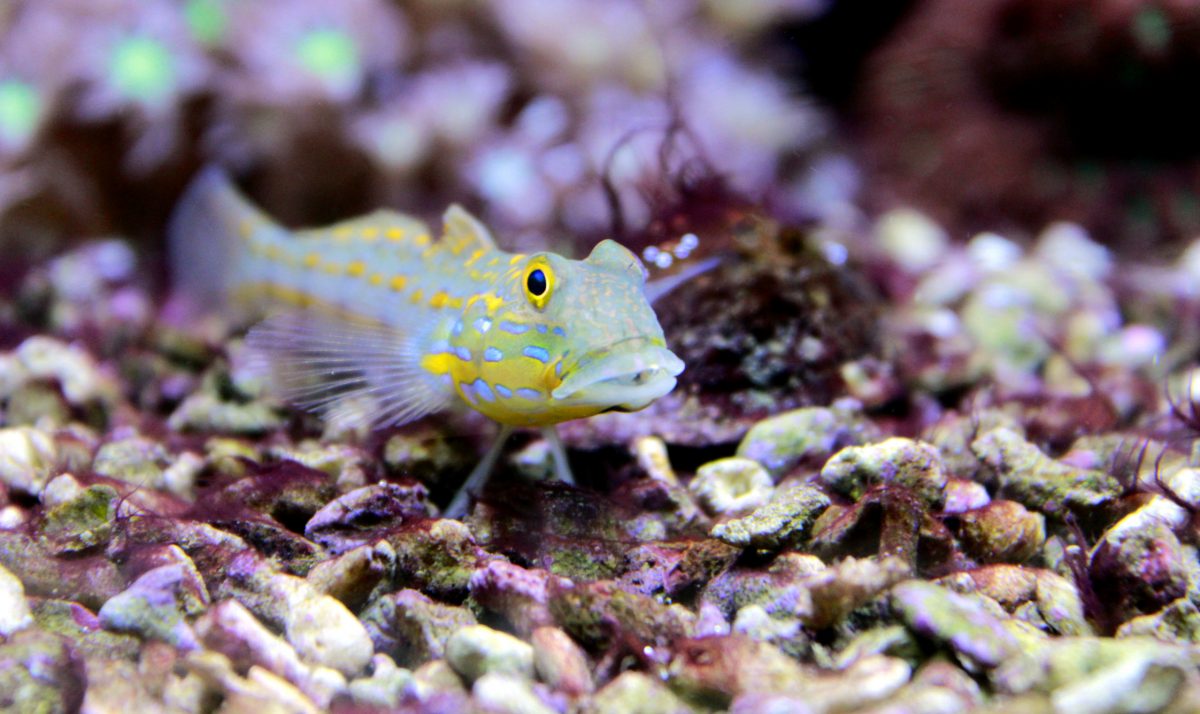 Wrasses are hardy, non-confrontational fish that generally get on well with other fish species. The wrasse comes in many gorgeous varieties, with four-line, six-line, and eight-line wrasses, fairy wrasses, and flasher wrasses all being excellent choices for beginner aquariums. Wrasses love to hide and bury themselves, so make sure to fill your tank with a sandy bottom and plenty of rocks. Wrasses can be housed in 30-gallon tanks, but they can be messy, so larger tanks are also not a bad idea, particularly for community aquariums. 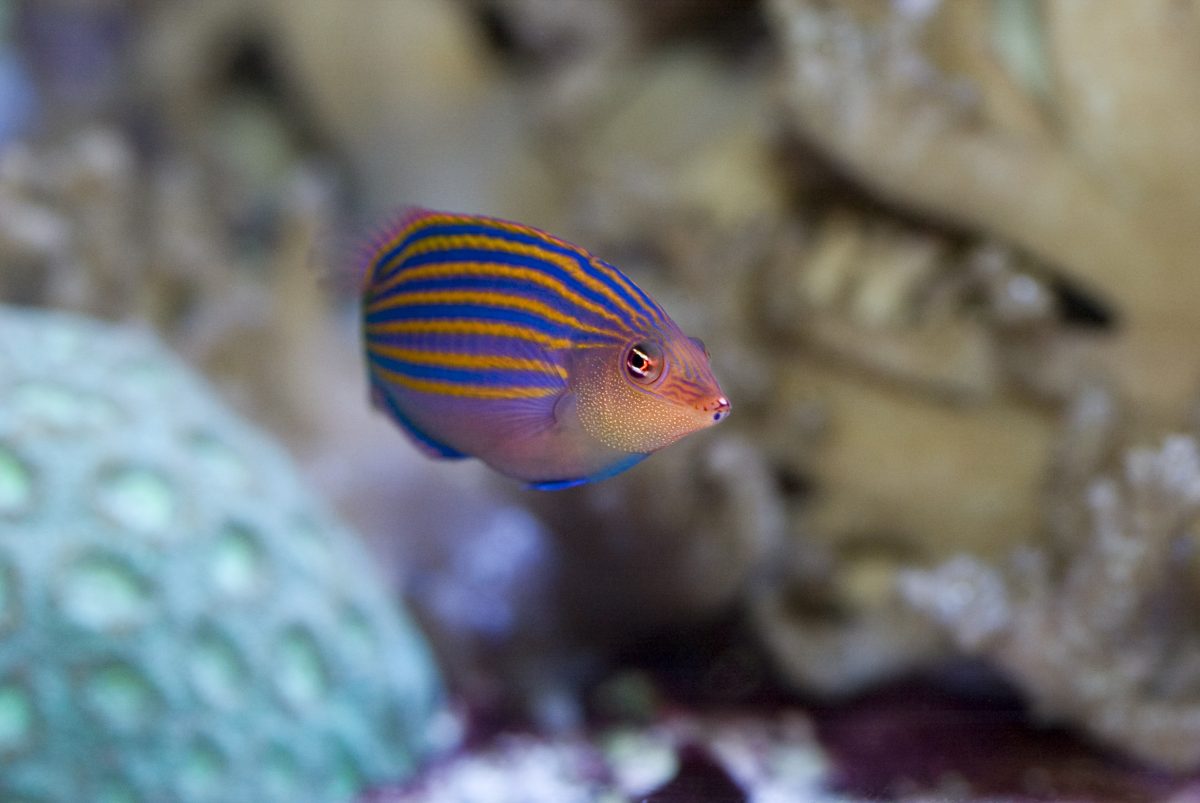 The coral beauty angelfish, also known as the two-spined angelfish or the dusky angelfish, is one of the easiest angelfish to keep in an aquarium. This striking fish has a deep blue body and bright yellow or orange highlights and is less aggressive than other varieties of angelfish. They acclimate well to aquarium life and are generally non-fussy eaters who will graze on algae in the tank. While angelfish don’t require coral, they do like to hide in rocks and plants, and require a larger tank — at least 70 gallons is ideal. 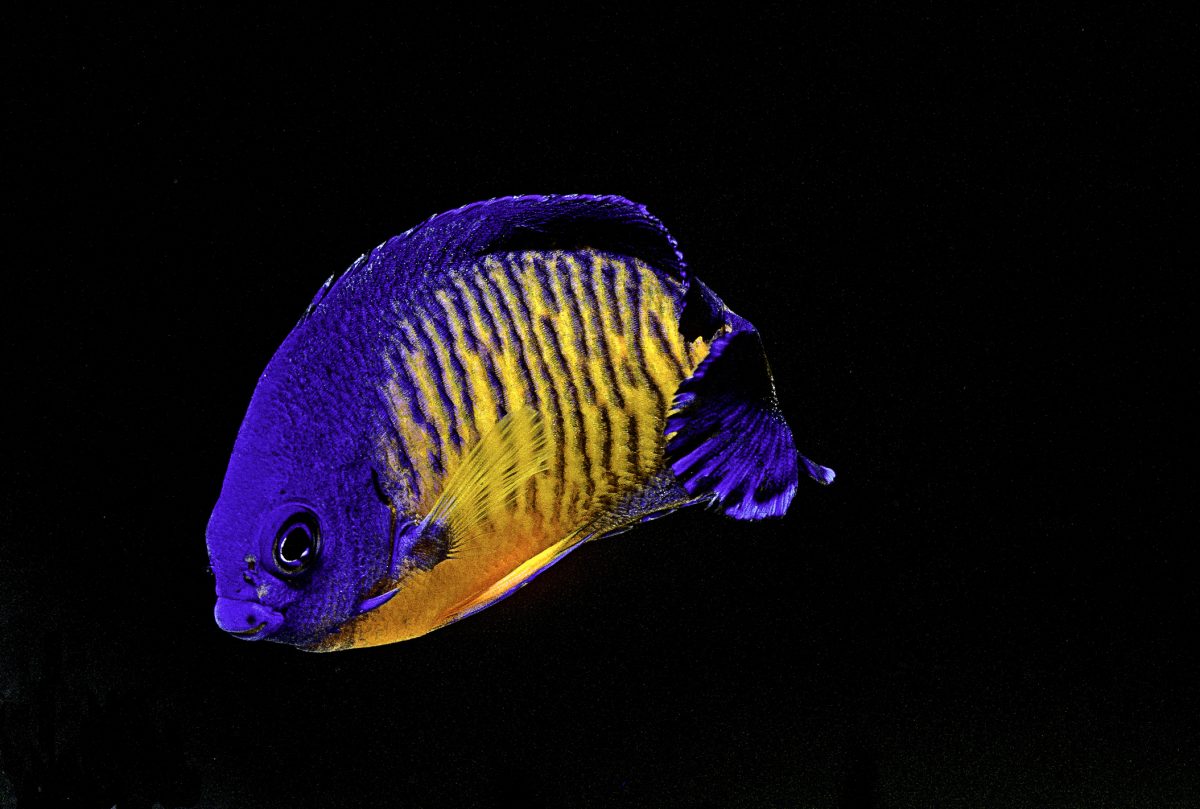 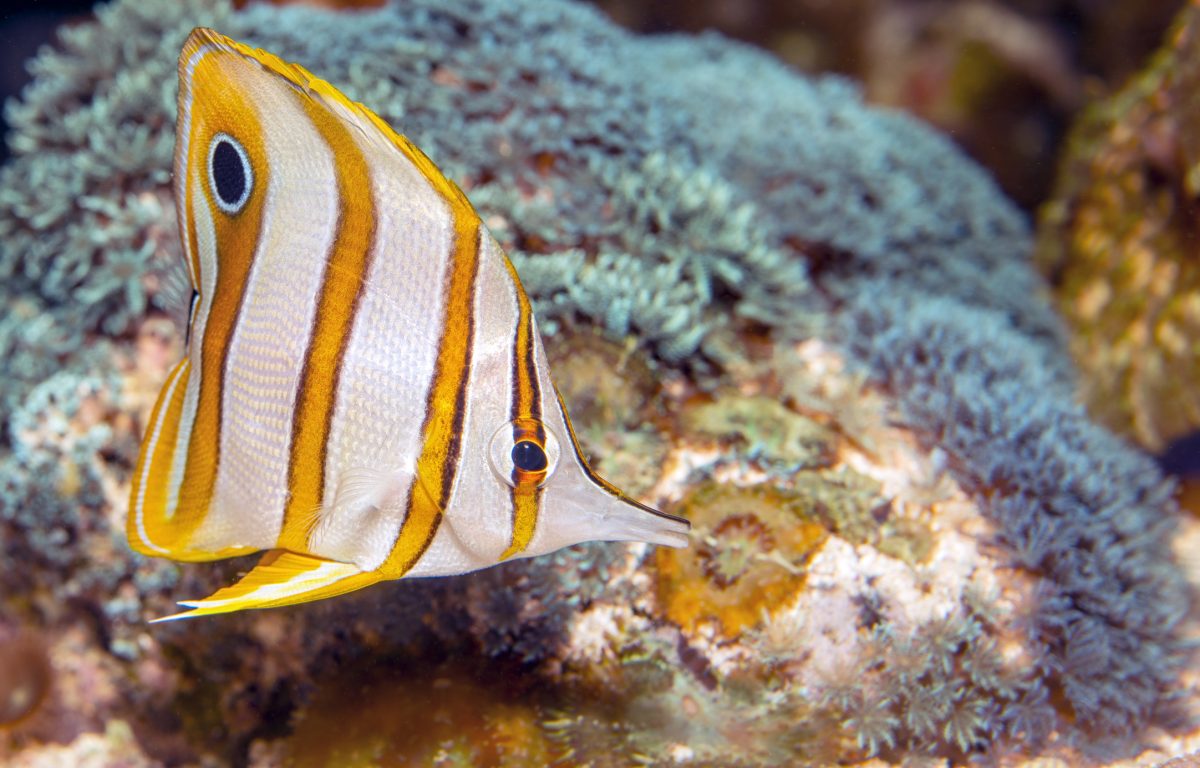 Firefish, so named for their vibrant tails, are more timid than their colorful appearance might suggest. If you’re keeping them in a community aquarium, make sure you give them plenty of rocky places to hide and be aware that they might not emerge until they feel safe. Firefish can get along fine in a 20-gallon tank, but make sure it has a tightly fitted lid, as they might otherwise jump out. 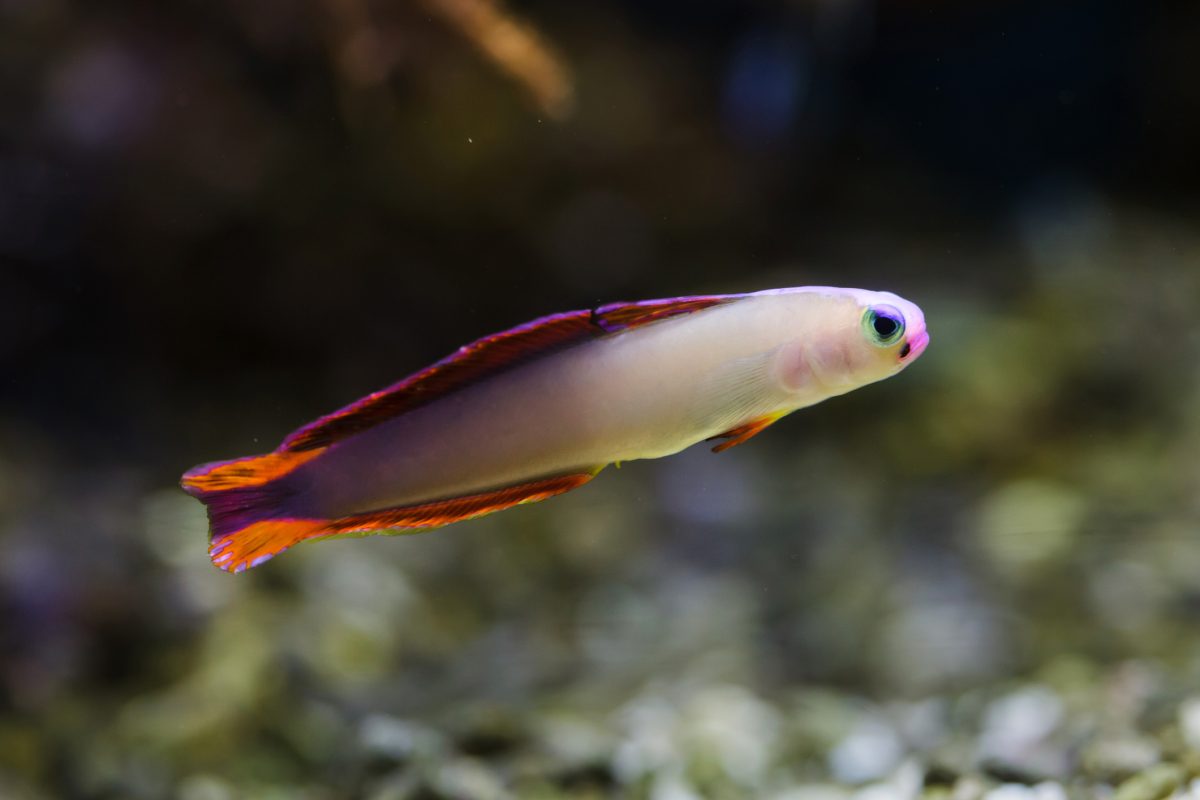 The peaceful blenny comes in many different varieties, with the lawnmower blenny and bicolor blenny being two of the most popular choices. Their calm temperament makes them a great addition to a community aquarium, but only among different species; they get along well with others, but bennies will fight among themselves if there’s more than one in the tank. Many types of blennies, lawnmower bennies included, will graze on algae in the tank, making them handy for new tanks, which are prone to rising nitrate levels. 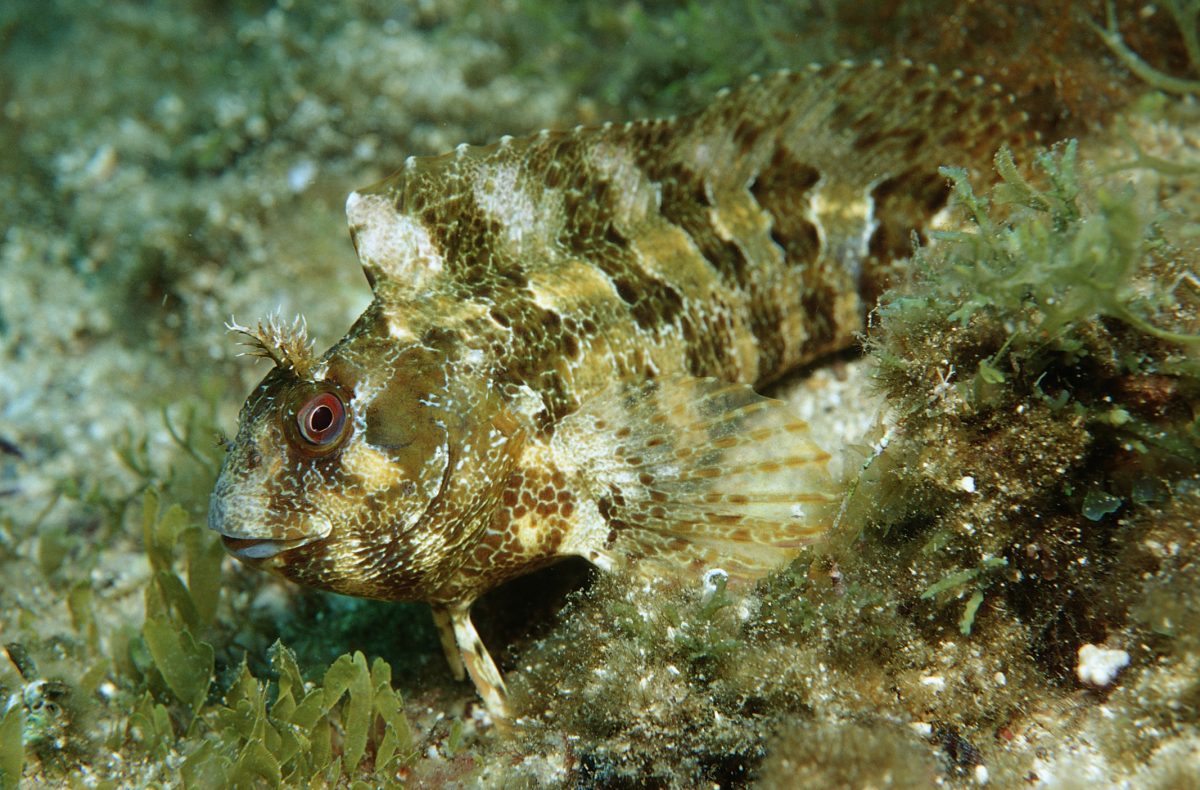 The hardy chalk bass is a fantastic choice for beginners. They can thrive even in sub-optimal water conditions and are resistant to illness, and have a peaceful temperament that makes them well-suited to community aquariums. Unlike many other saltwater fish, chalk bass will even get along well with others of the same species, as long as they’re added at the same time. Chalk bass love caves and rocky overhangs, and are another species prone to jumping, so make sure you have a tightly-fitted lid. 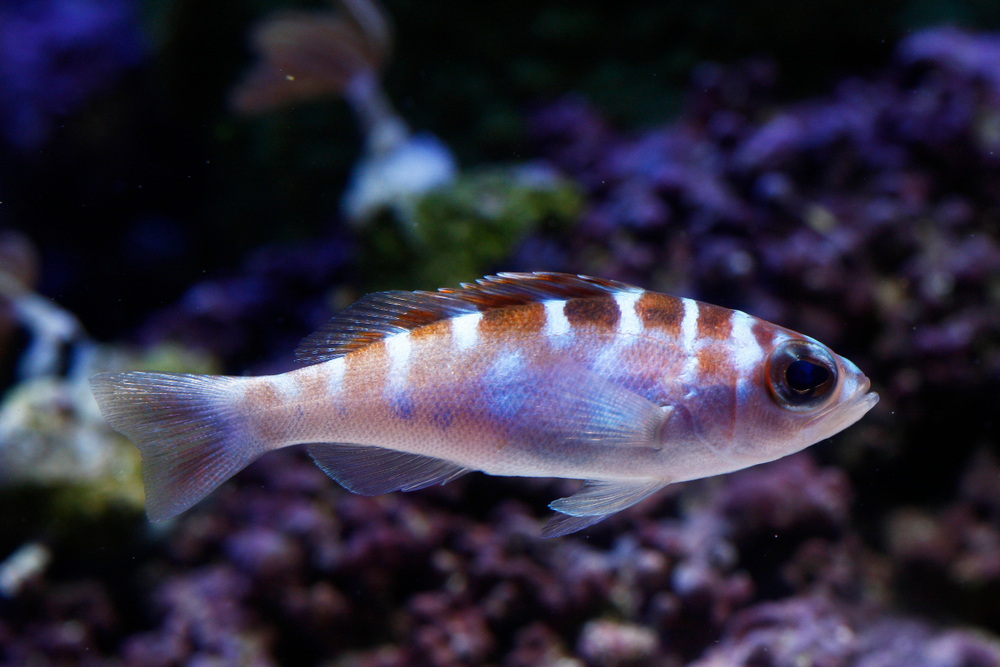 A little higher-maintenance than most on this list, the tang is a good choice if you’re a little more confident in your fish keeping abilities. For those with some experience, though, the tang is a beautiful, brightly-colored addition to your aquarium. Tangs are boisterous but not aggressive toward other fish, and juvenile tangs can be kept together in schools. Make sure to feed them a diet with lots of variety, including shrimp and nori, and be aware that they can be susceptible to fish diseases like ich and head and lateral line erosion. 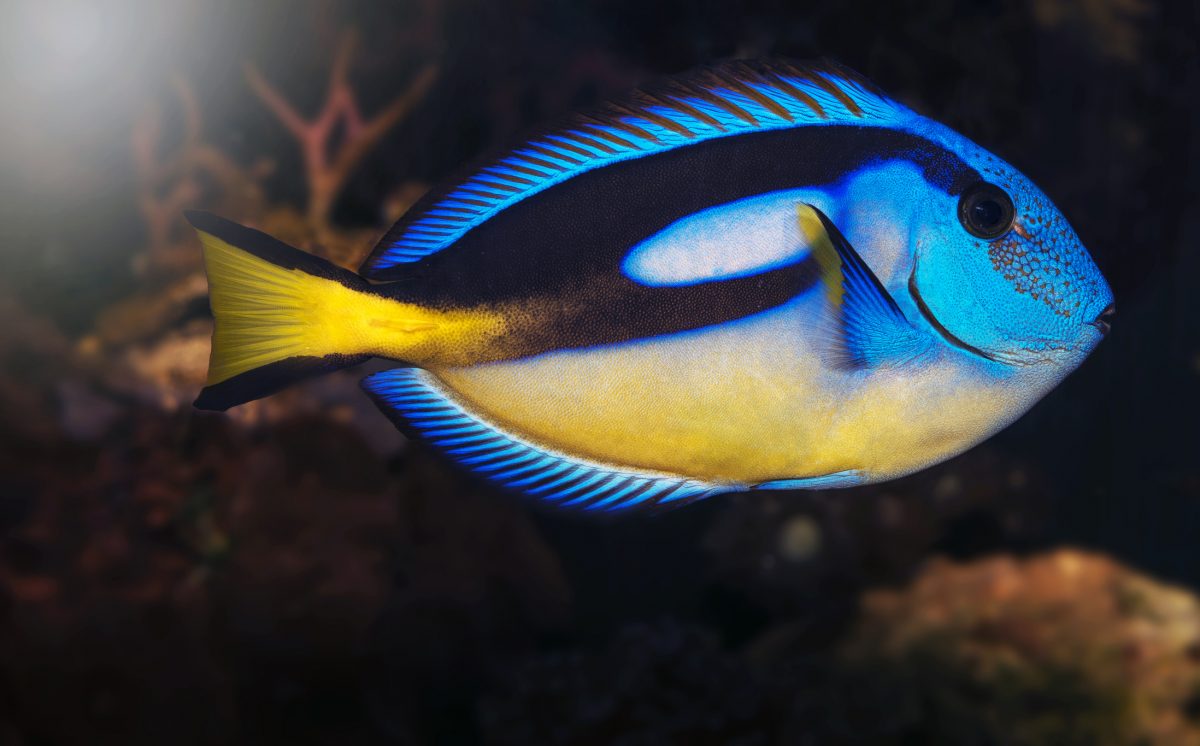