Is an American Bulldog Right For Me?

American bulldogs are stocky, tough looking dogs, but deep down they are an affectionate breed that often think they belong on your lap. Bigger and leaner than their English ancestors, American bulldogs have become a cultural icon in the United States. Their reputation for being tough and tenacious have made them a popular mascot for schools and sports teams, including Yale University. For the right owner, they are a loyal and friendly dog that can fit happily into family life.

American Bulldogs at a Glance

There is a lot of variety in the size of American bulldogs. They can grow anywhere from 20-27 inches and weigh between 60-107 pounds. They have a box-like muzzle and pendant shape ears that give them their distinctive appearance. Their sturdy body has a broad chest, strong neck and powerful legs that allow them to jump great heights. American bulldogs come in many colors but are generally all white or white with patches of color. 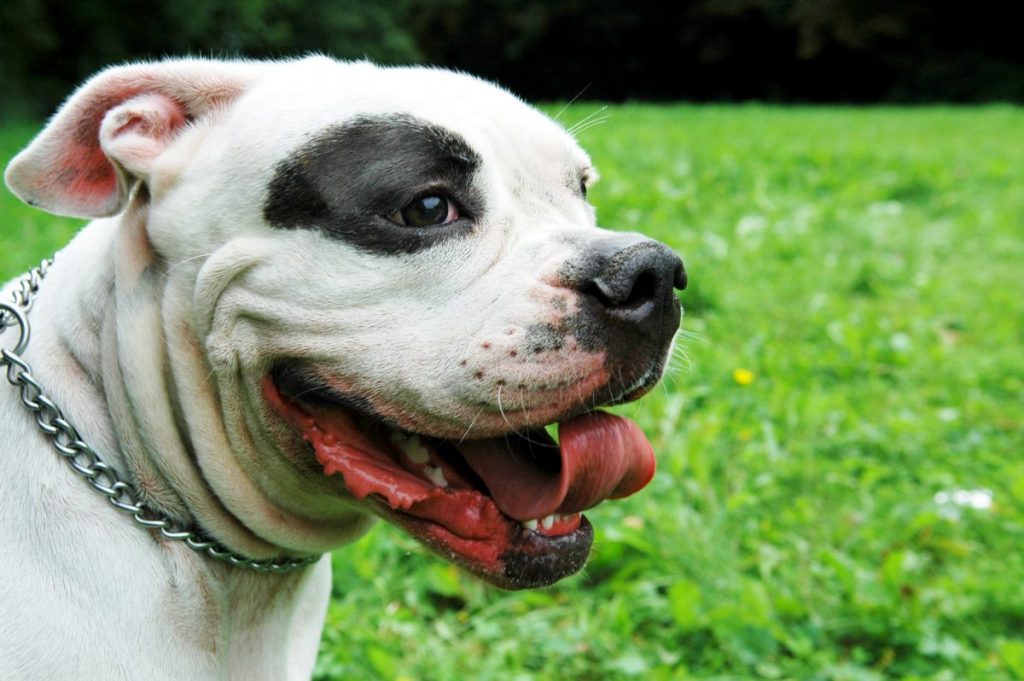 American bulldogs descended from the English bulldog. These dogs were used for catching cattle and guarding property before becoming a popular bull baiting dog. After bull-baiting was outlawed, English bulldogs were bred to be smaller animals. The original bulldog made its way to America before this, so the American breed stayed bigger. They were popular as working dogs and in the American South would protect against feral pigs. By the 1940s the breed was nearing extinction but was revived after World War II by John D. Johnson and Alan Scott. 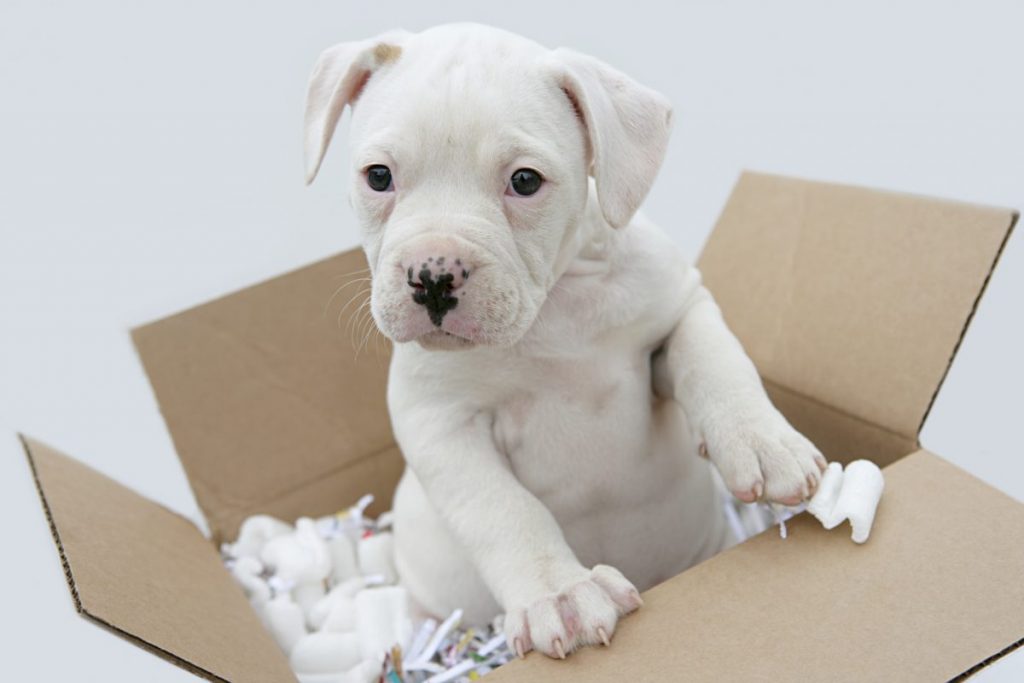 Although they may look tough, American bulldogs have very sweet personalities. They are friendly and happy, but completely loyal to their family. In fact, they can be very protective of their families and have been known to perform heroic acts for their humans. Their intelligence can make them stubborn, but with patience, they are easily trained. They are active and always ready to play, but relax when it is time to come indoors. 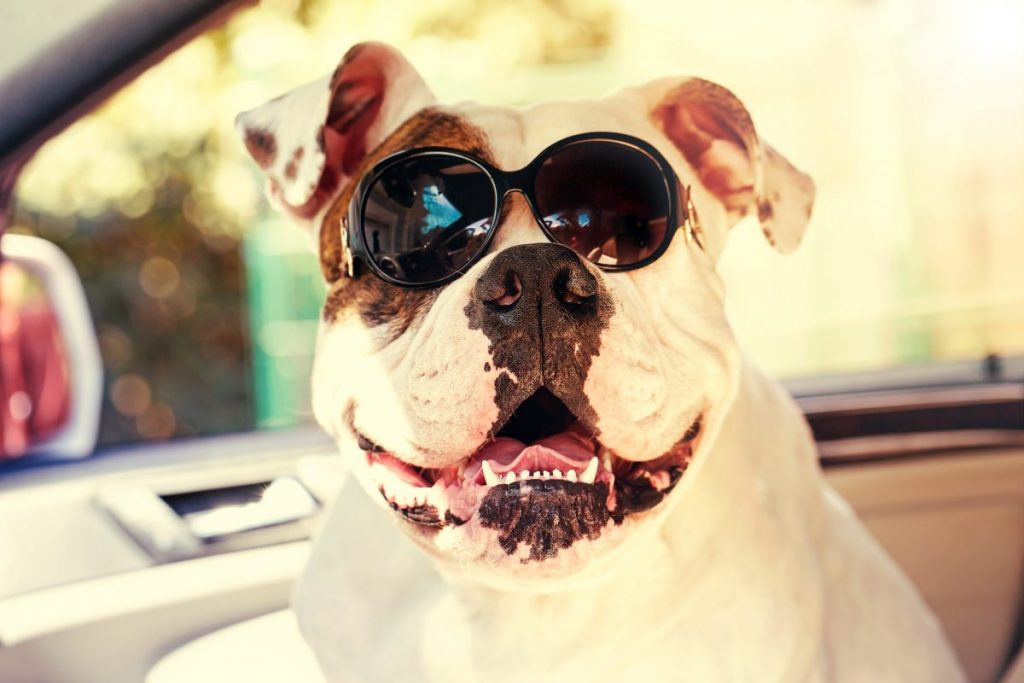 The American bulldog is generally considered a healthy breed, but there are some health concerns owners should keep in mind. In particular, they can be prone to allergies due to an overactive immune system. Often this is a reaction to food and dogs that lick their paws excessively or have red, itchy skin should be tested for allergies. They are also at danger of developing hip and elbow dysplasia. The genetic nervous system disorder neuronal ceroid lipofuscinosis shows up in American bulldogs and new owners should ask breeders for a genetic test to rule this out before purchasing a puppy. 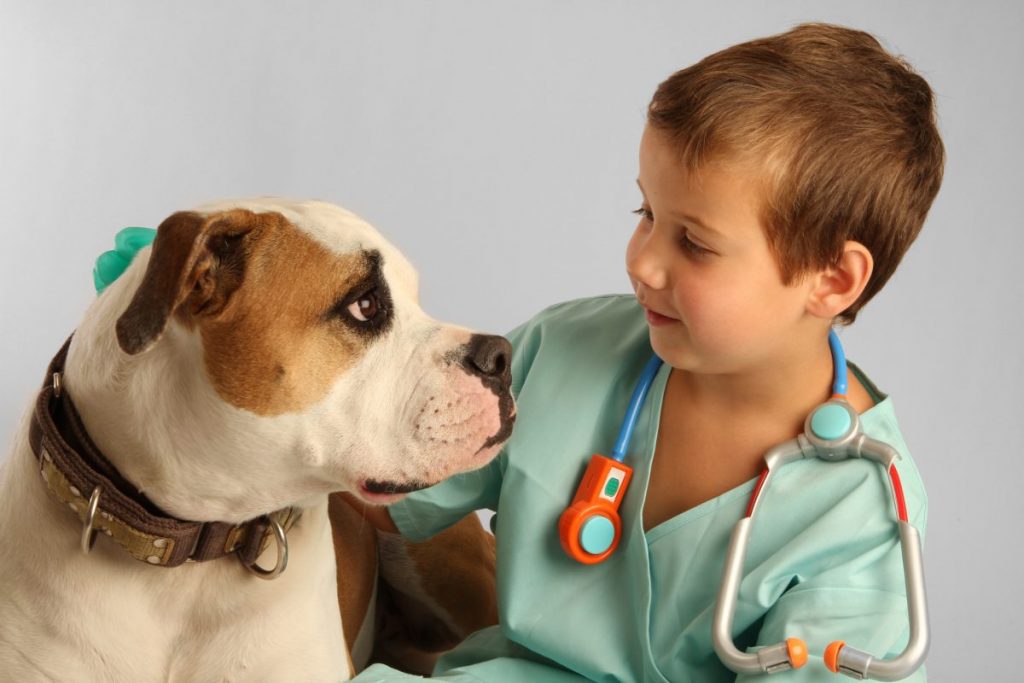 American bulldogs are powerful dogs that need to be properly trained from a young age to ensure they become good canine members of society. Puppies should be socialized early so they learn to get along with other animals and humans. Without this, they may be aloof with other dogs and protective of their family when around other people. Their intelligence and strength mean they need a strong, experienced owner willing to spend time to properly prepare them for the world. 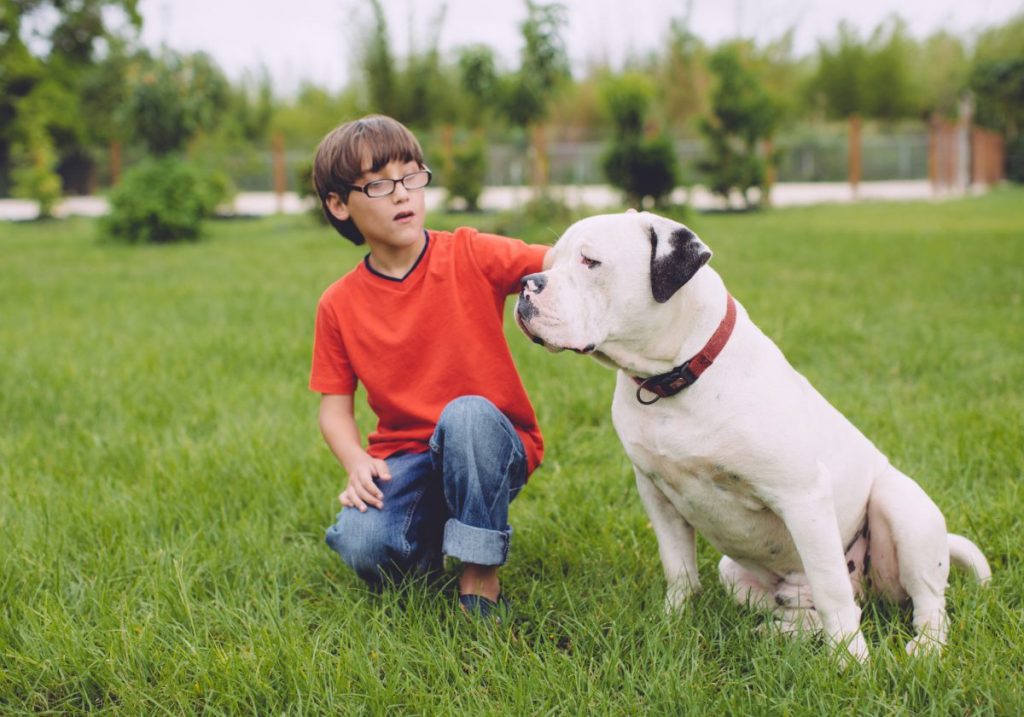 As a working breed, the American bulldog needs plenty of daily exercise. Without proper physical and mental stimulation, they can become anxious and destructive towards things like furniture. Dog sports such as agility, weight pulling and Schutzhund can help them channel their energy and give them a mental challenge at the same time. They do better in homes with a large back yard where they can run around and with energetic people happy to take them on runs each day. 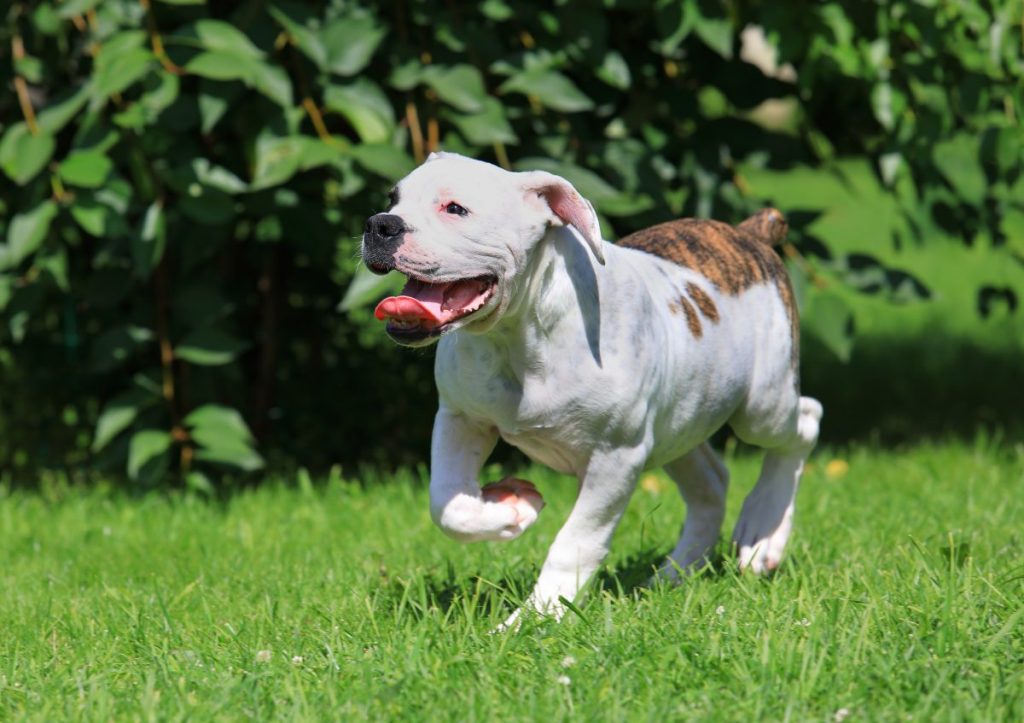 American bulldogs are prone to becoming overweight without the proper exercise and nutrition, so it is important to feed them the right food. If they have food allergies, take a vet's advice on correct nutrition. As an active and muscular dog, they need plenty of protein to maintain their muscles. Owners should ensure they get enough food to fuel them through their high levels of exercise. 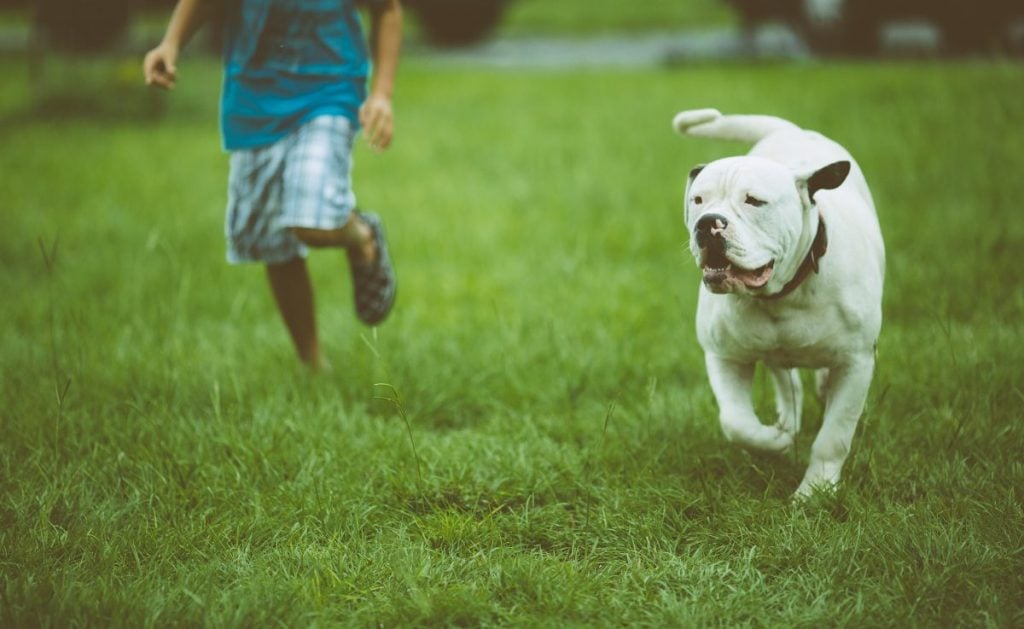 American bulldogs are a short-haired breed, so they do not need any complicated grooming. However, they do shed throughout the year and owners may find that weekly brushing keeps the shedding under control. American bulldogs are prone to excess drool. This, coupled with their wrinkles, can lead to skin problems. Owners need to make sure their wrinkles are free of excess moisture so that bacteria does not build up and lead to an infection. 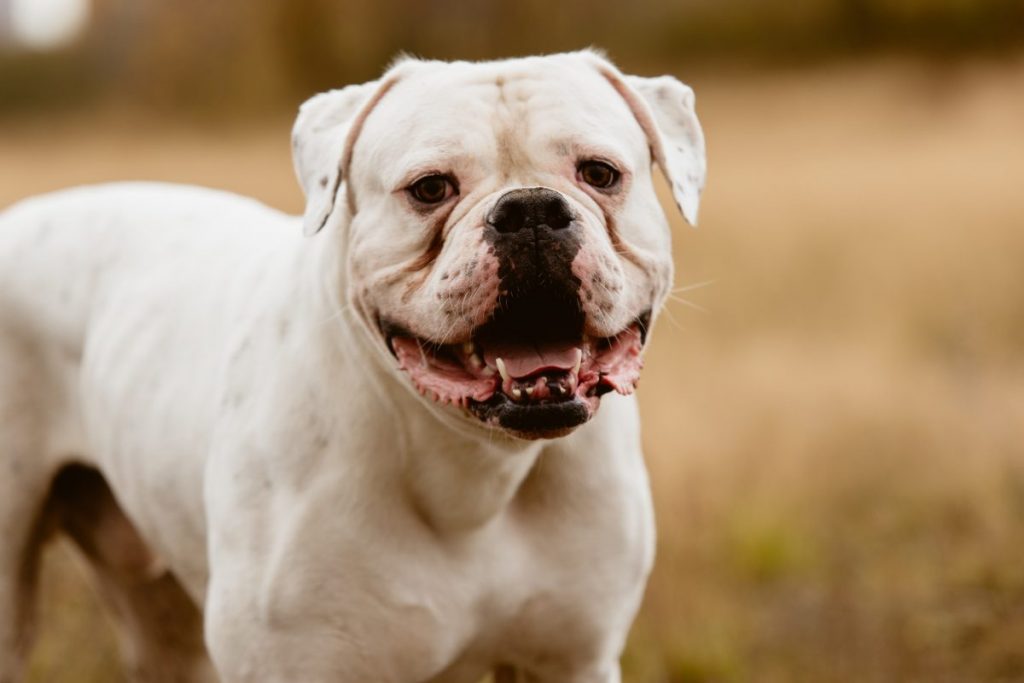 American Bulldogs and the Family

An American bulldog that has been socialized early can be a great family companion. They are affectionate with young children and have a high pain tolerance that helps them remain gentle when small hands pull at their ears or fur. They are a powerful breed, though, and when playing may not understand their full strength, so it is important to supervise them around children. They get along well with other pets if raised with them. American bulldogs consider themselves part of the family and take their job to protect the family seriously. 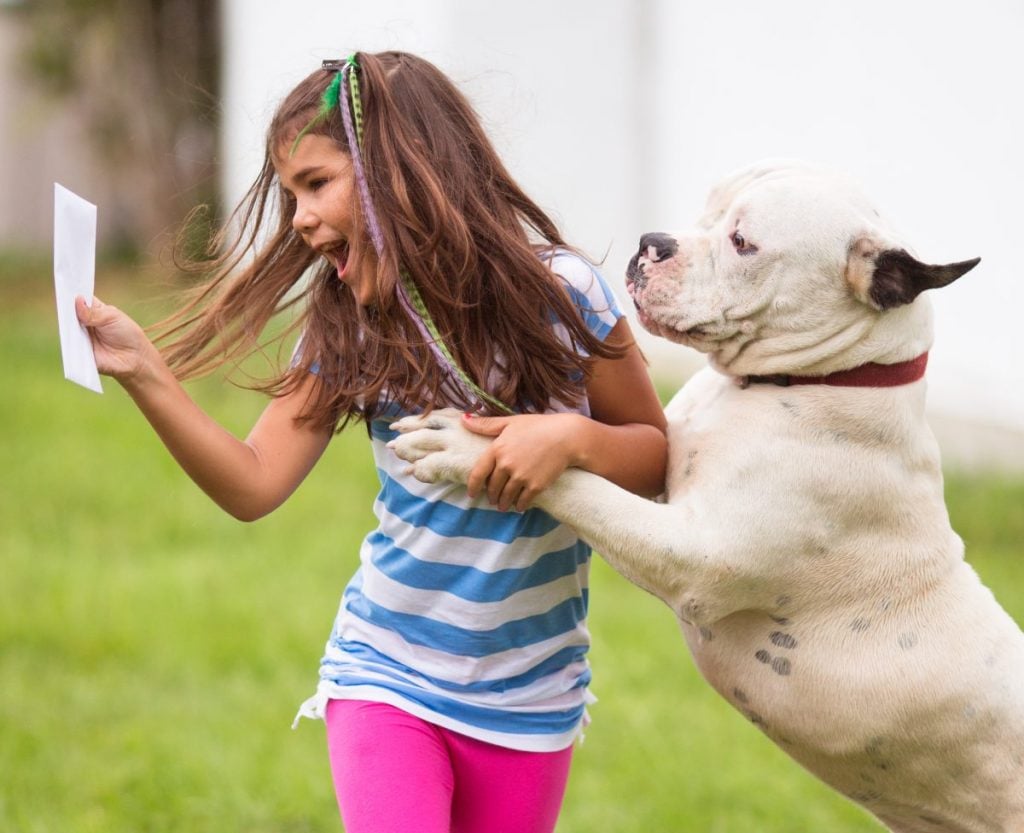 Who Should Get an American Bulldog?

American bulldogs are not the right match for everyone. They need an experienced owner who has the time to train them properly. They can live in urban environments, as long as they get plenty of exercise. They are also a good choice for people on farms. Prospective owners should take their schedule into consideration before buying an American bulldog, as they can become anxious if left alone for long periods. 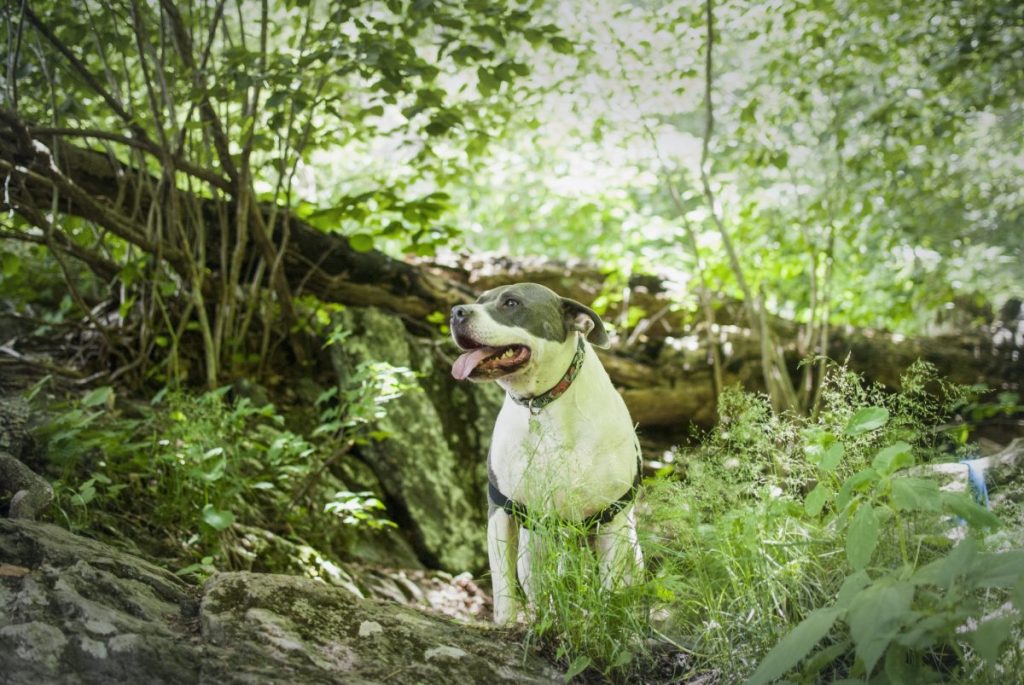