How Do Animals Sweat?

As the year winds into the summer and the months feel hotter than ever, many people may begin to wonder how the animals of the world manage to stay cool. As humans, we are able to rely on our many sweat glands to produce sweat. When the sweat evaporates, it carries away the heat on our bodies and leaves us feeling cooler. Though we are far from the only species that sweat, most animals are not lucky enough to have such an efficient cooling method. However, there are many animals that have their own ways of achieving a similar effect.

Some animals that don’t sweat have to use their environment to regulate their temperature. Pigs, boars, buffalo, and hippos often roll in mud and coat their bodies with it. This action is wallowing, and, like sweating, it helps cool the animals through evaporation. In terms of why these animals prefer mud, it actually evaporates much more slowly than clear water. This allows the animals to feel cooler for a longer period of time. Interestingly, a 2011 study suggests that pigs’ ancient ancestors had sweat glands and merely had a tendency to wallow. The study claims that modern pigs lack sweat glands because their ancestors would wallow, rather than wallowing because they lack sweat glands. 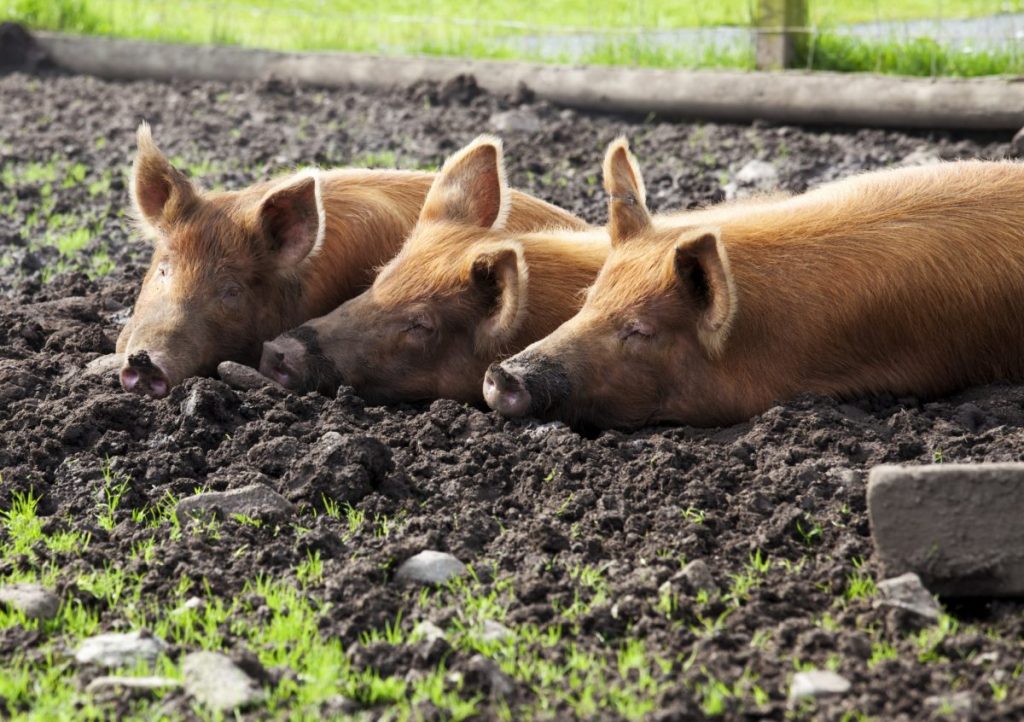 Though they wallow, Hippos actually have an incredible second way of staying cool. Hippos have the capability of secreting two acidic compounds: hipposudoric acid and norhipposudoric acid. Though these compounds are unstable on their own, they are able to bind to mucus and stick to the hippos’ skin. After sticking, the compounds are able to survive long hours in the water, all while absorbing the sun’s rays. Though much remains unknown about the hippos’ natural sunscreen, research suggests it may have the added benefit of acting as an insect repellant. 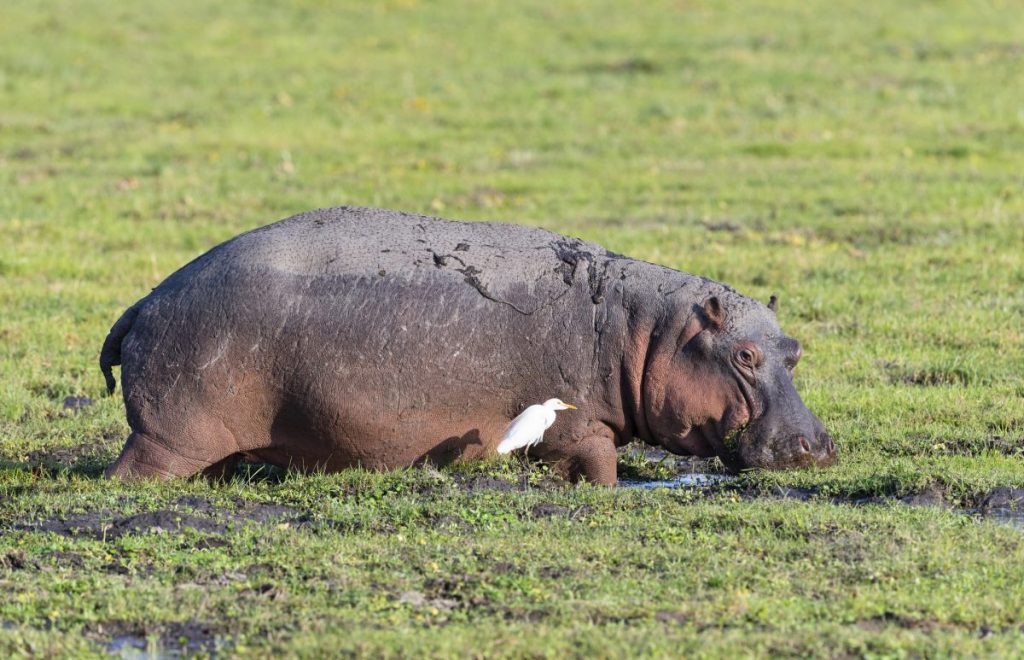 Everybody has seen a dog, cat, or horse panting at some point, and most people are aware that it helps the animals stay cool. However, not many people know how panting reduces an animal’s temperature. In a way, panting is like sweating in that it relies on evaporation. By exhaling, the animals are able to expel hot air from the lungs through evaporating water. When they inhale, the cooler air helps to cool their bodies. Because it relies on evaporation, panting requires a significant amount of water. 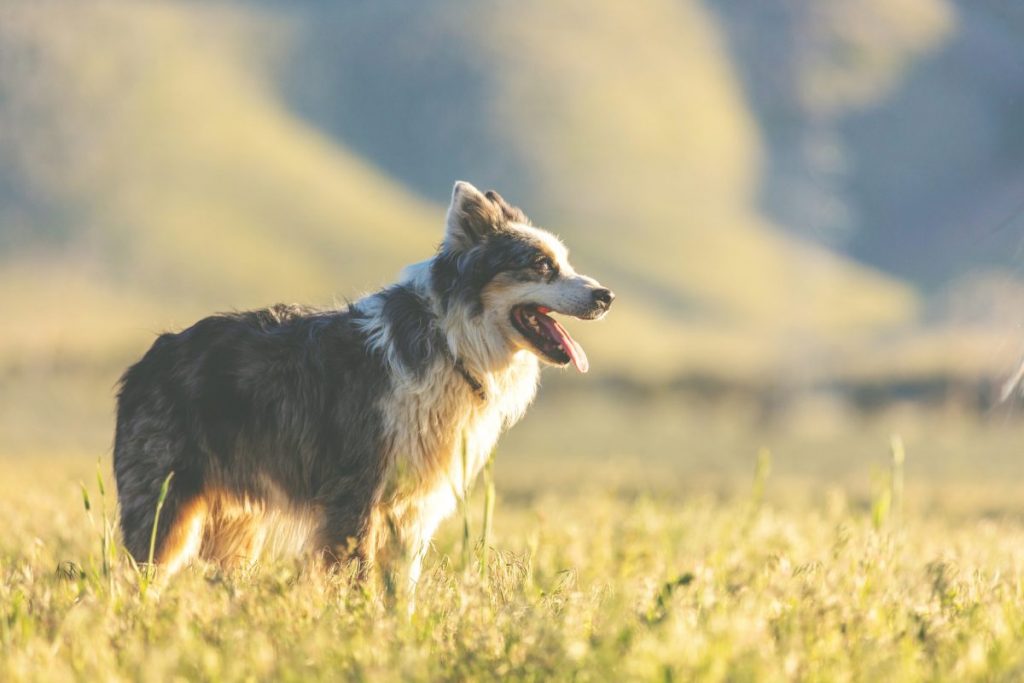 Though panting is their main way of cooling off, animals like dogs, cats, and small mammals have a secondary method as well. On the underside of some animals’ paws are special sweat glands. Rather than thermoregulation, these sweat glands have the primary goal of providing friction between the paw and the ground. However, though it isn’t the main purpose of the glands, the sweat does have a small cooling effect as a simple side effect. 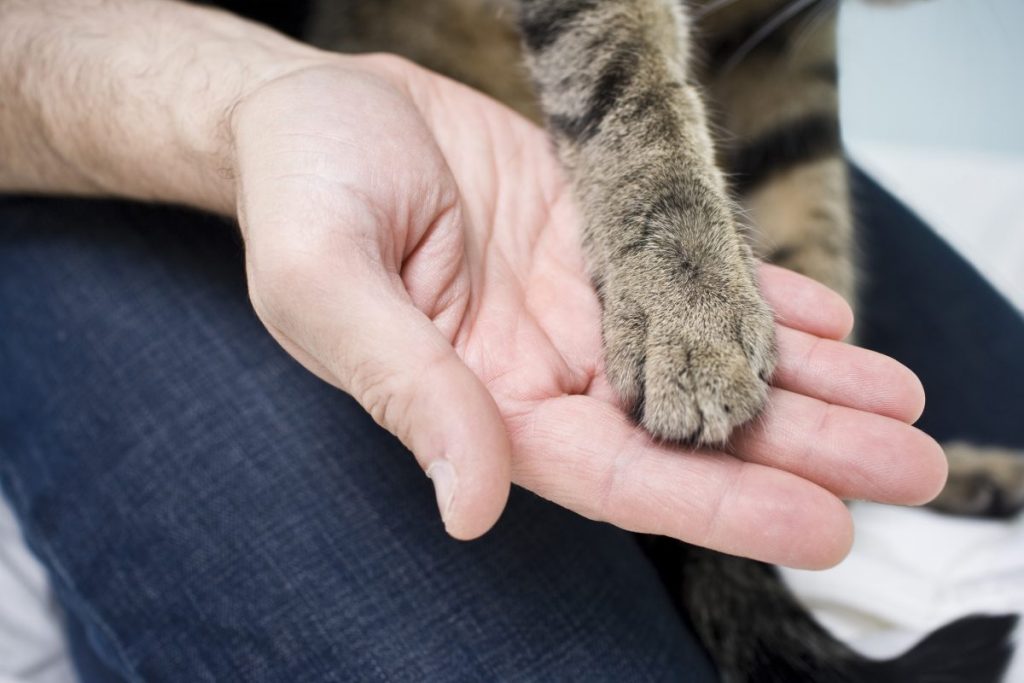 Birds are warm-blooded creatures that lack sweat glands. Because of this, the various species of bird have each developed different ways of regulating their body temperatures. Some species achieve this through gular fluttering. By vibrating muscles and bones in their throat, the birds are able to expose their moist throats to the air. This allows for better evaporation and, in turn, more effective cooling. This process doesn’t require much energy, so it’s an incredibly efficient thermoregulation mechanism. Pelicans, herons, owls, quail, and doves are each capable of gular fluttering. 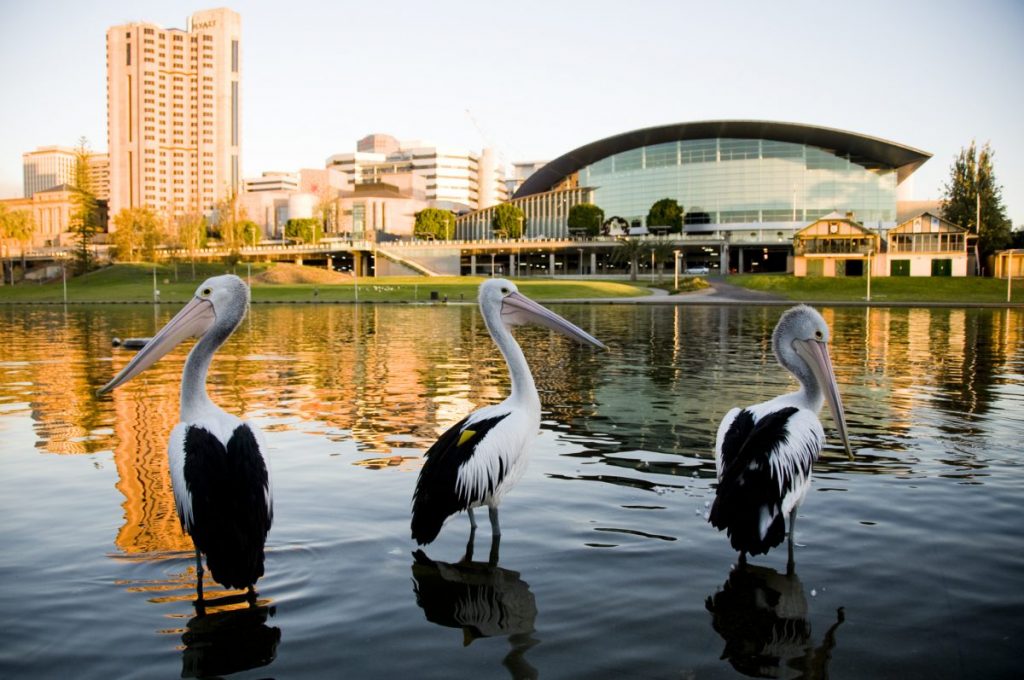 When it comes to sleeping through the elements, most people probably think of hibernating animals that sleep through the cold winter months, such as bears. However, there are some animals that perform the reverse: they sleep through the heat. This mechanism is estivation, and it helps animals survive by slowing their metabolism. With a slower metabolism, the animals don’t need to eat as much during the hot summer months. Some animals, such as snails, have protective shells to retreat into while other animals, such as lungfish, burrow into the ground. Earthworms are also capable of estivation. 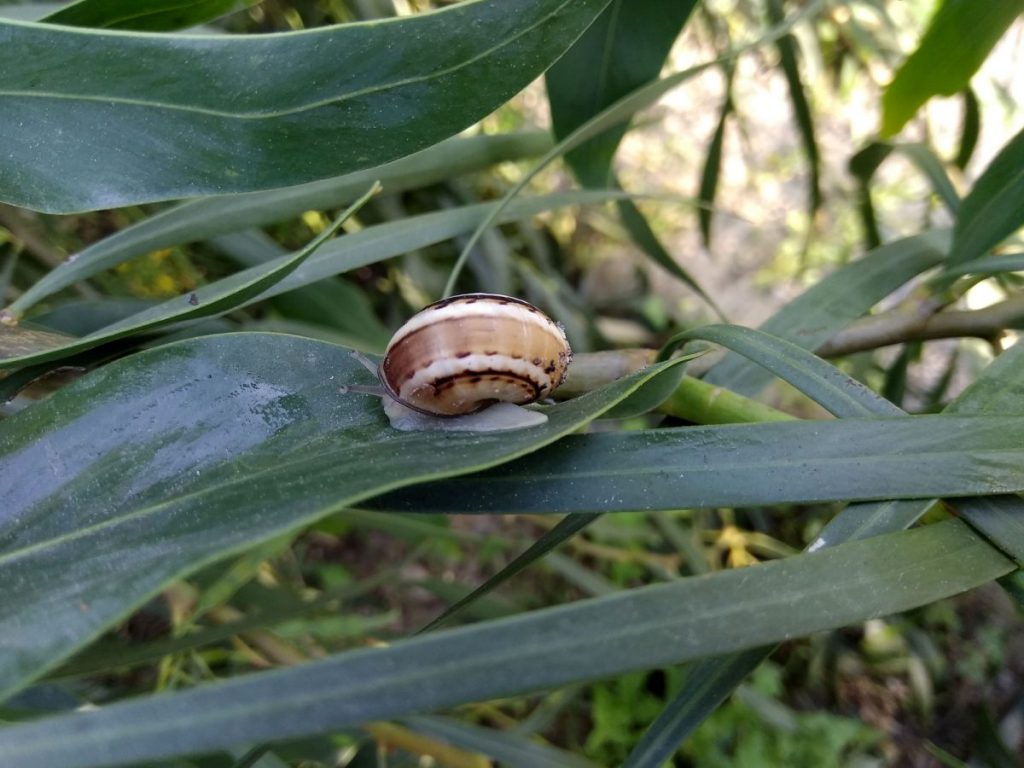 If an animal is trying to beat the heat, there are few options as effective as simply not being in the heat. Reptiles are able to regulate their temperature by moving to different environments. When they need to be warmer, they rest under the sun. When they need to cool off, they simply run away and slip into a shady area. Unfortunately, because they have no internal thermoregulation mechanism, lizards are incredibly sensitive to changes in climate. During extremely hot periods, it’s common for lizard populations to decline dramatically because they cannot hunt or reproduce. 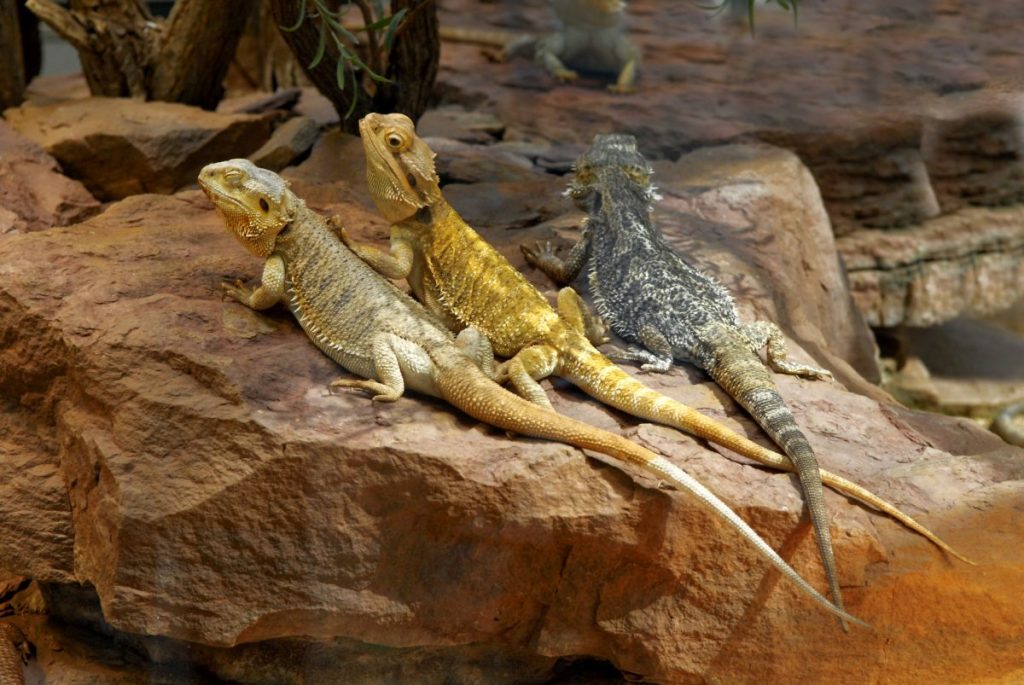 One of the greatest human inventions is the air conditioner, but we were hardly the first creatures to have a system to cool our entire home. Termite mounds can measure several yards tall and contain many small holes around their surface. These holes create a system of air pockets that rely on convection to create ventilation. Bees collect water on their travels and spread it on their hives. Hive bees then fan the hive and the water with their wings to cool their homes. Prairie dogs have incredibly intricate burrows, but without ventilation, they would be hot and stuffy. By placing a small tower that’s higher than their other entrances, a breeze moves slightly faster over the tower’s holes than the lower entrances. This pulls the stale, warm air away from the burrows. 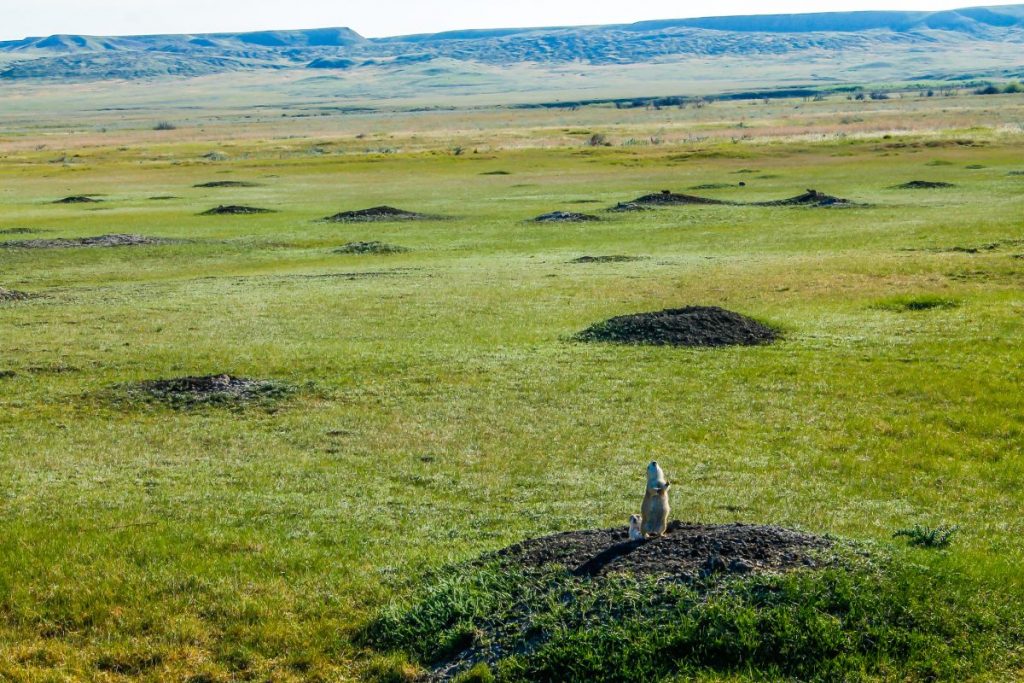 Though most animals have unique and interesting ways of cooling off, some have less savory means of thermoregulation. Certain species of storks, herons, and vultures use their excrement to cool off. Specifically, they defecate on their own legs. Because bird excrement is mostly liquid, it provides cooling the same way sweat does. Over time, the liquid evaporates and pulls heat from the birds’ bodies. 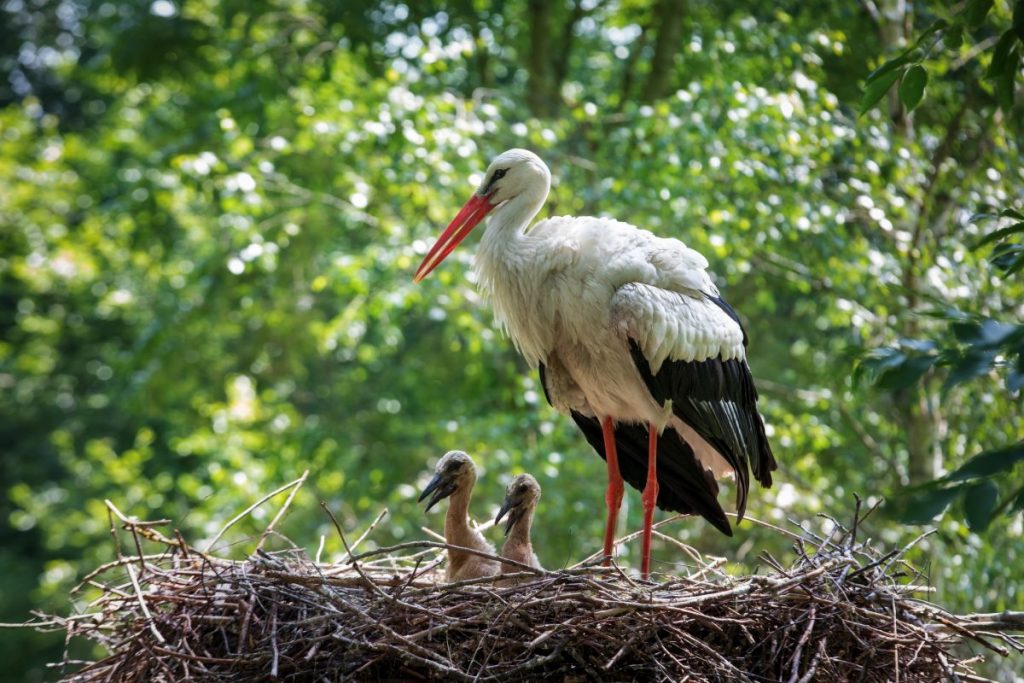 Australia is one of the hottest continents on the planet, so the island’s wildlife must be capable of handling the heat. In order to protect themselves from the unforgiving heat, kangaroos have a method of cooling off that is similar to that of the storks and vultures. However, rather than defecating, kangaroos spit on themselves. Each kangaroo has a network of blood vessels in their forearms that is capable of cooling their entire body. By licking or spitting on their arms, the kangaroos make sure the area is soaking wet. Then, as the spit evaporates, it cools their bodies. 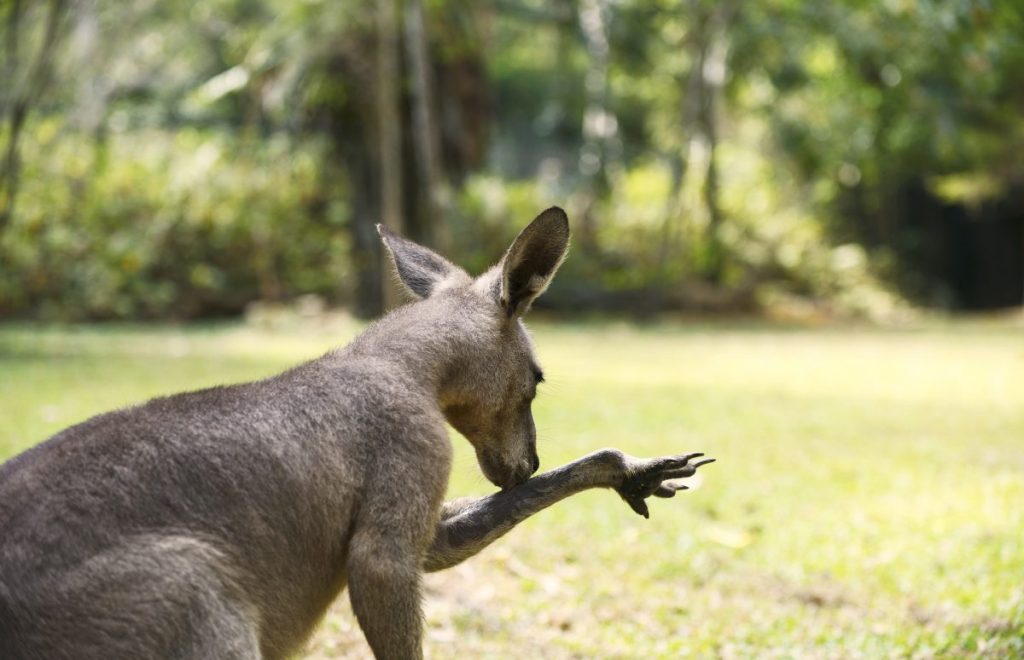