Everything You Wanted to Know About the Catahoula

The Catahoula is a breed of medium-large working dogs from the United States. They are powerful and tough, agile, and possess a positive attitude towards work. Catahoulas are usually around 22 to 24 inches in height and weigh between 50 and 95 pounds, and tend to live between 10 and 14 years. Catahoulas are named after Catahoula Parish in Louisiana. The breed is also sometimes known as the Catahoula Cur or the Catahoula Hog Dog.

Appearance of the Catahoula

Catahoulas have a compelling aesthetic, although they can vary in their looks because they have been bred for their personality and other physical attributes rather than their looks. The Catahoula has a short coat that comes in a variety of colors, which includes black, tan, white, brown, and gray and often comes in a leopard pattern. Their coats can be smooth or course. Their eyes are a mixture of regular eye colors and blue or bluish-white sections, adding to their distinctive look. This is called 'cracked glass' or 'marbled glass.' Their tails are usually shaped like question marks and can have a white tip. 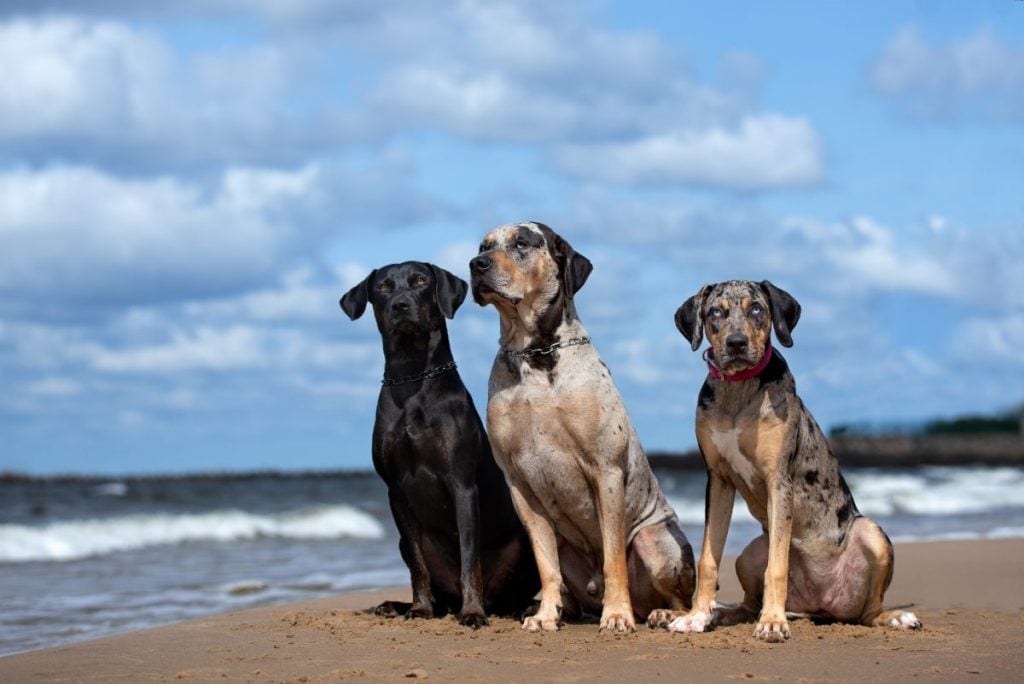 Personality of the Catahoula

The Catahoula is a dog who is loyal, intelligent, and hard-working. This is an energetic, curious, and assertive canine who is serious about its work and playful at home. They are naturally protective dogs who are loving with their family members. Although they are aggressive in their work or sometimes with other animals, Catahoulas are not aggressive towards people. They can be cautious of strangers, particularly adults. They require consistent training as puppies to become properly socialized as adults. 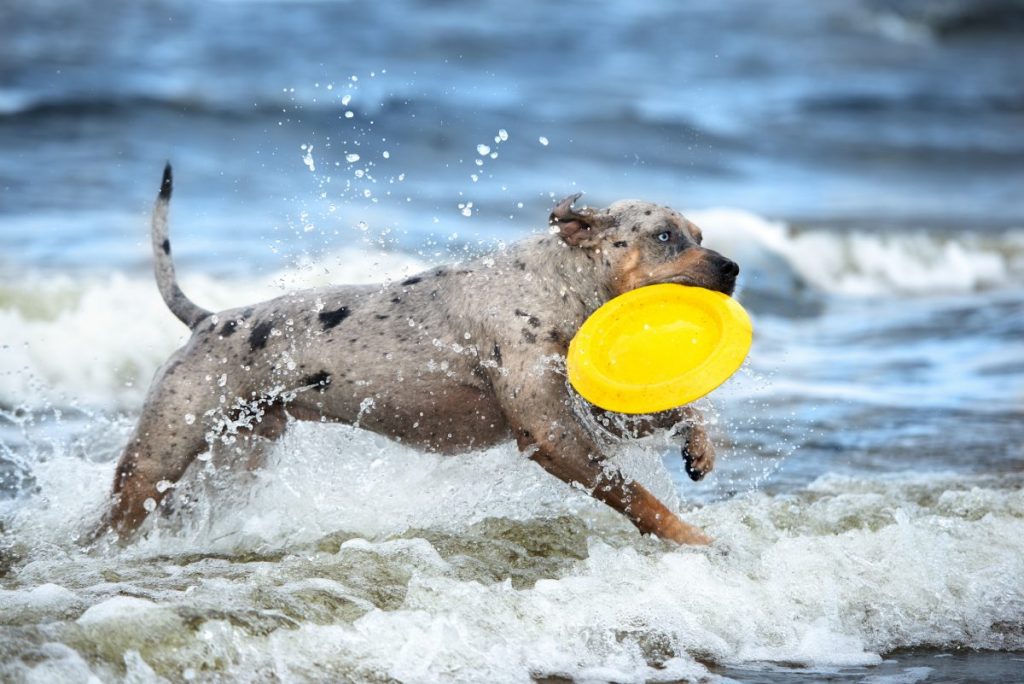 The Catahoula is protective of the family and has even been described as a good babysitter, so they may be a good choice for a family home. They tend to be less wary of strangers who are children than they are of strange adults. However, it is important never to leave children unsupervised with a dog. It is also critical that all children living with dogs should be taught to respect dogs as well as how to behave properly around them. 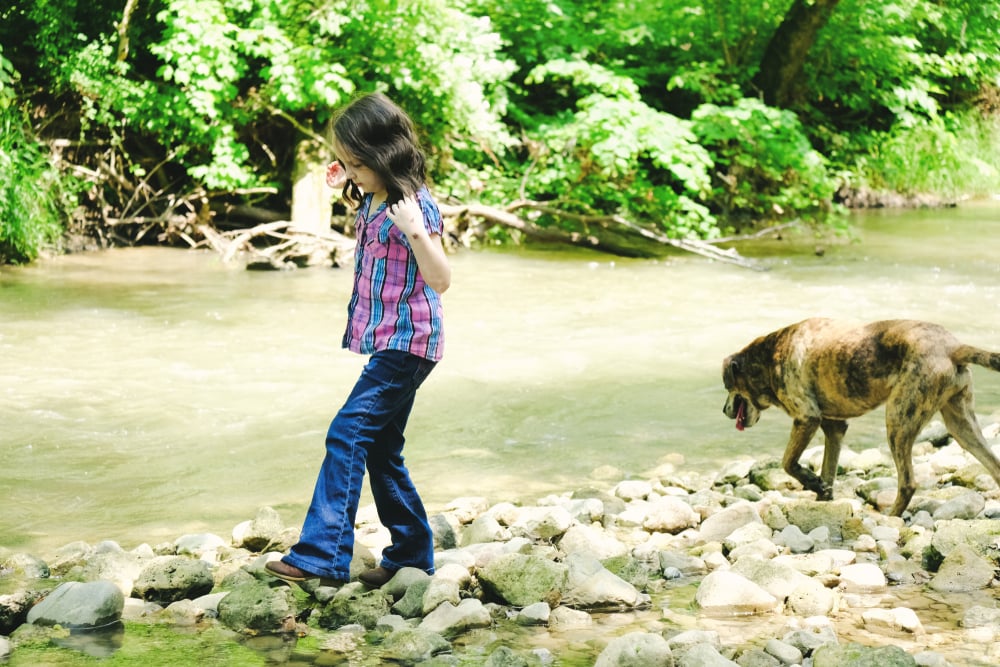 Catahoulas and Other Pets

Catahoulas have a strong instinct to catch prey, as they were originally bred to be hunting dogs. This means that many of them are not particularly suitable for living with smaller animals. However, this depends on the individual dogs, as some Catahoulas can get on well with other animals that they have been raised with.

Similarly, Catahoulas can sometimes get on with other dogs if they are trained well, but this is far from guaranteed, as they can try to dominate other dogs, especially if they are male. Catahoulas may need to be the only dog in the home. 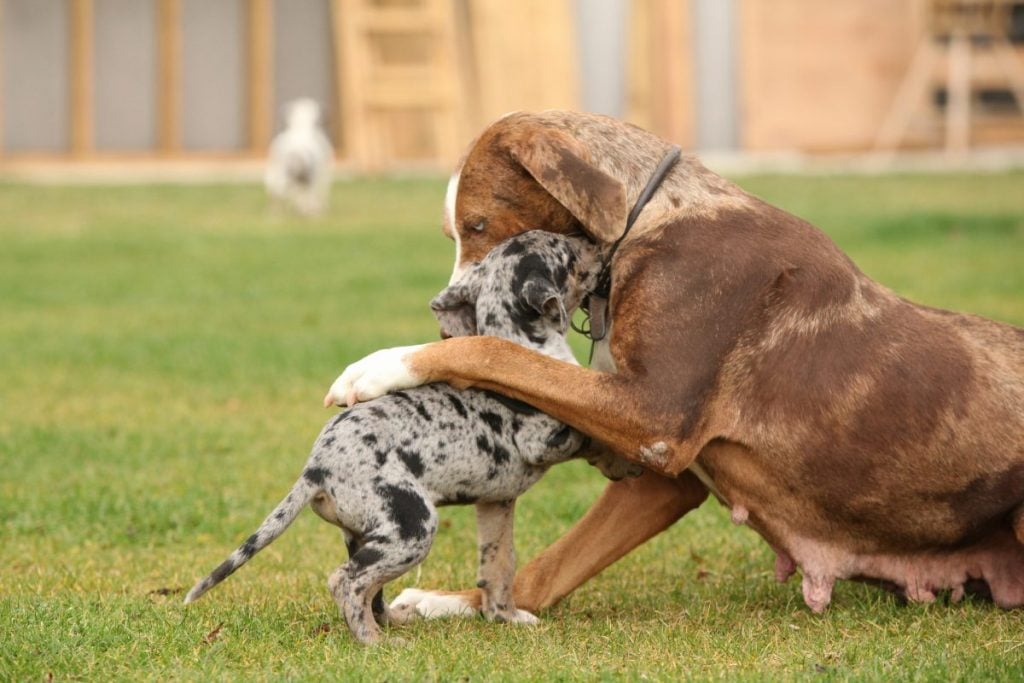 Catahoulas need plenty of training to socialize them so that they are friendly towards strangers, and, hopefully, other animals. Consistency is very important when training a Catahoula, as they need to be shown who is in charge. Exercise and stimulation for Catahoulas is essential. If they do not get the activity they need, they can become destructive because they are bored. 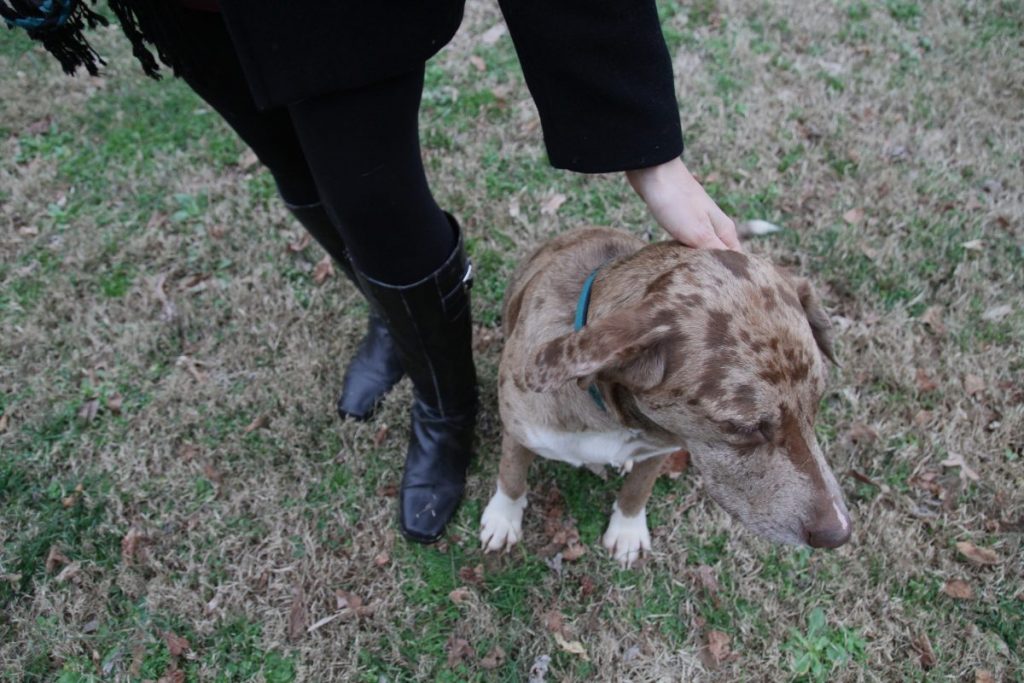 Catahoulas, unlike a lot of pedigree dog breeds, are not bred for their looks. This means that they tend to be healthier dogs. However, it is still important to be aware of the health concerns that the breed is prone to. These are primarily eye problems, hip problems, and deafness. Owners of Catahoulas should make sure that their dogs get regular health check-ups with the veterinarian and that they keep their dogs in good condition with a good diet and plenty of exercise. Catahoulas need at least one hour of exercise per day. 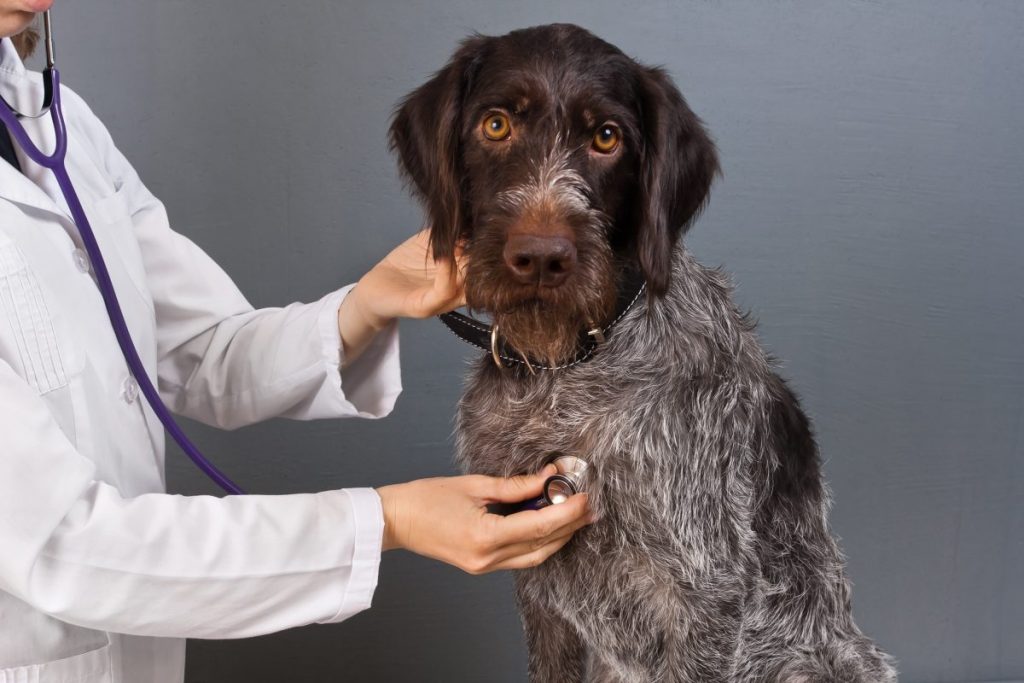 Catahoulas are working dogs, used mostly for farm work such as rounding up cattle, reindeer, and pigs. Unlike other herding dogs, they intimidate their herd rather than stopping the movement of the herd between areas.

Catahoulas are also great hunters and have been used to hunt bears, mountain lions, boar, deer, squirrels, and raccoons. 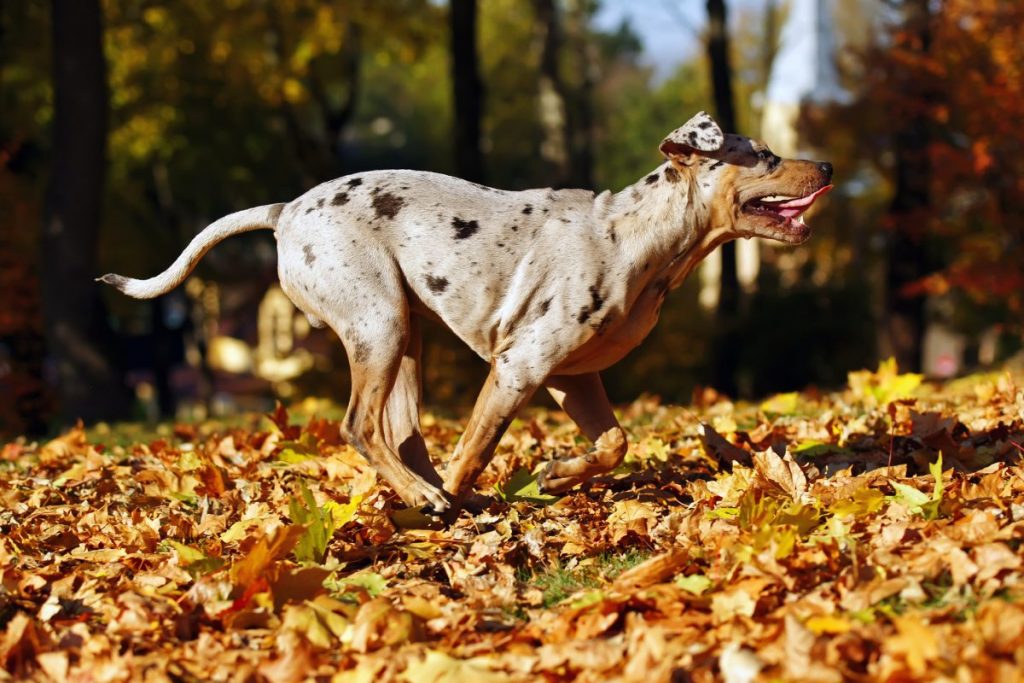 To keep a Catahoula fit and healthy, it needs a properly balanced diet, which consists of either good quality dog food or food prepared at home with the advice of a vet. Catahoulas need around three to five cups of dog food per day, at least one hour after exercise, so that they do not become bloated.

Treats are useful to help with training, but dogs should not be given too many, nor should they have much human food.

Owners should check the weight of their Catahoulas on a regular basis to make sure that they are not becoming overweight. 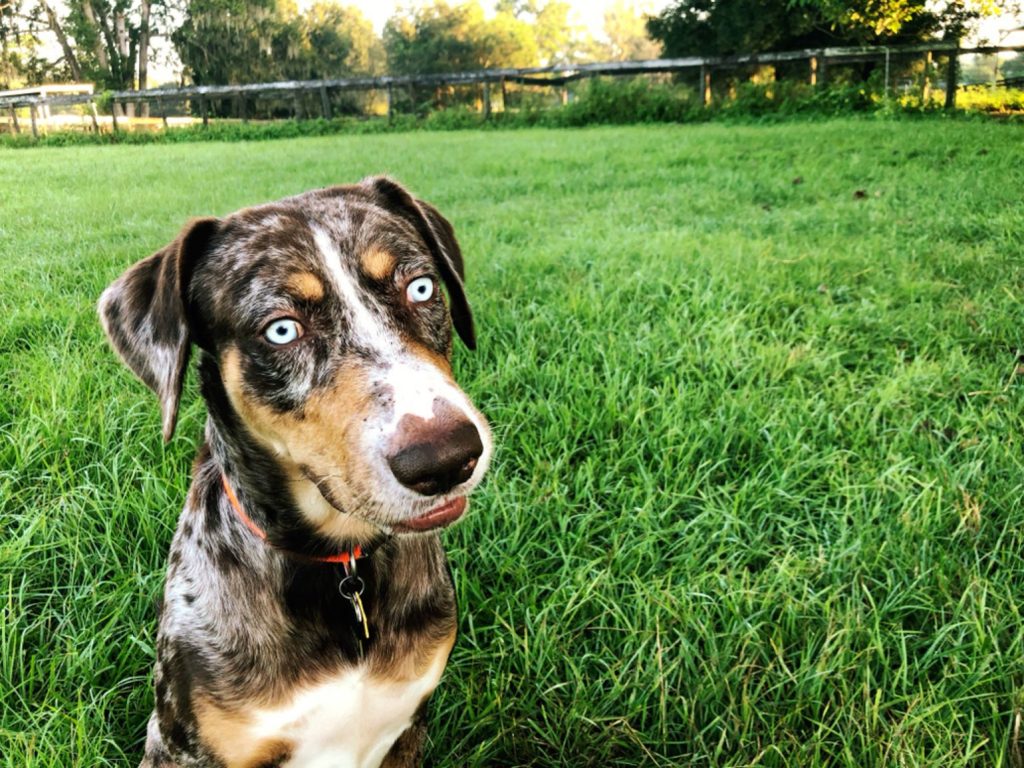 Catahoulas coats are fairly low maintenance, and only need brushing once a week. They will need bathing around twice per year.

Keep your Catahoulas nails clipped. Owners can do this themselves or go to a professional dog groomer. It is also important that a Catahoula has their teeth brushed at least several times a week. 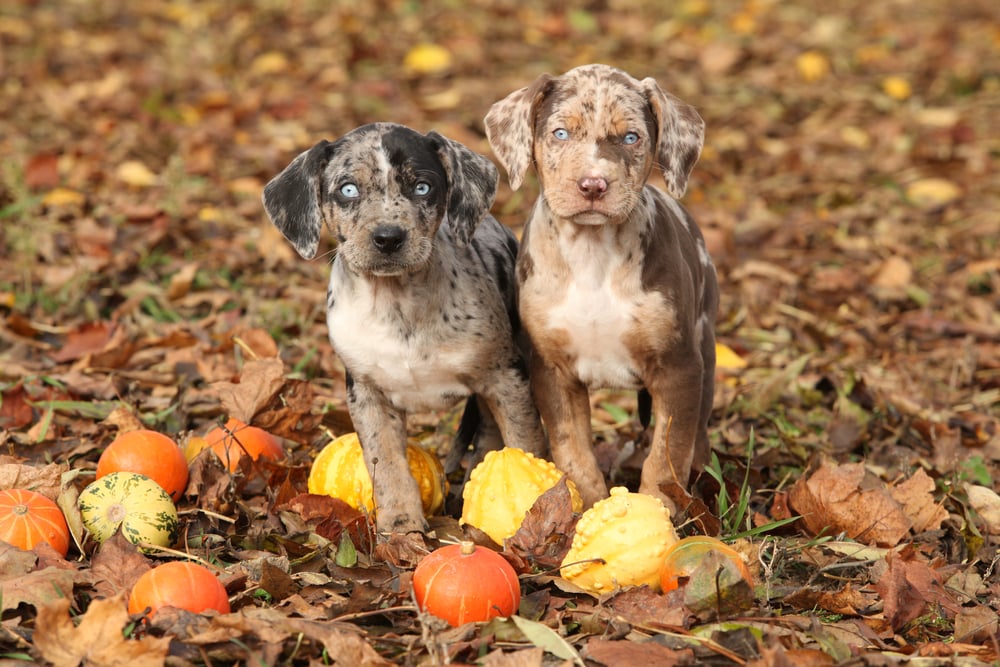 History of the Catahoula 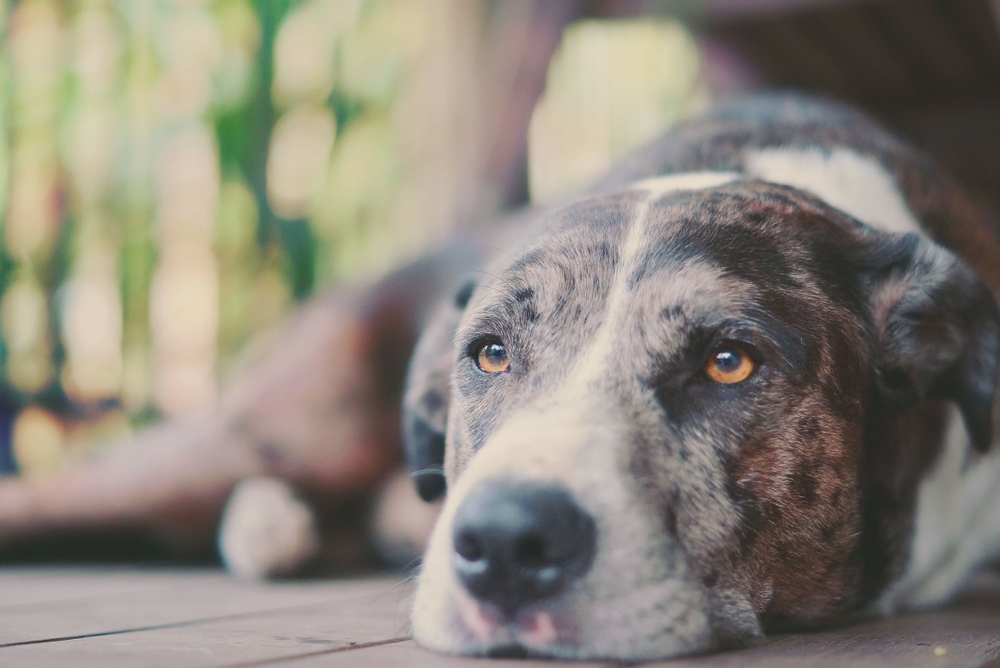