Everything You Wanted to Know About Doberman Pinschers

The Doberman Pinscher is a fairly new but popular breed of dog. It is highly intelligent, obedient, and energetic. As a result, the Doberman needs a lot of exercise and stimulation. Perhaps contrary to their fierce reputation, as naturally protective dogs, Dobermans make loving family pets who are extremely loyal to their owners. They are playful canines that are easy to groom and easy to train. Dobermans are working dogs that stand at around two feet, weigh 60 to 80 pounds. They tend to live between 10 and 13 years.

Doberman Pinschers are medium-sized, muscular dogs with square frames. They are traditionally and most commonly black or black and rust or tan in color, although there are some other genetic variations. Dobermans' tails are naturally long, but they are usually docked, both to meet the standards of breeding clubs but also because they have a tendency to break as they are quite fragile. Docking has been made illegal in a number of countries, including the majority of the EU and Australia. In some places, such as the United States, Doberman Pinschers' ears are cropped, but this is illegal in a number of countries. 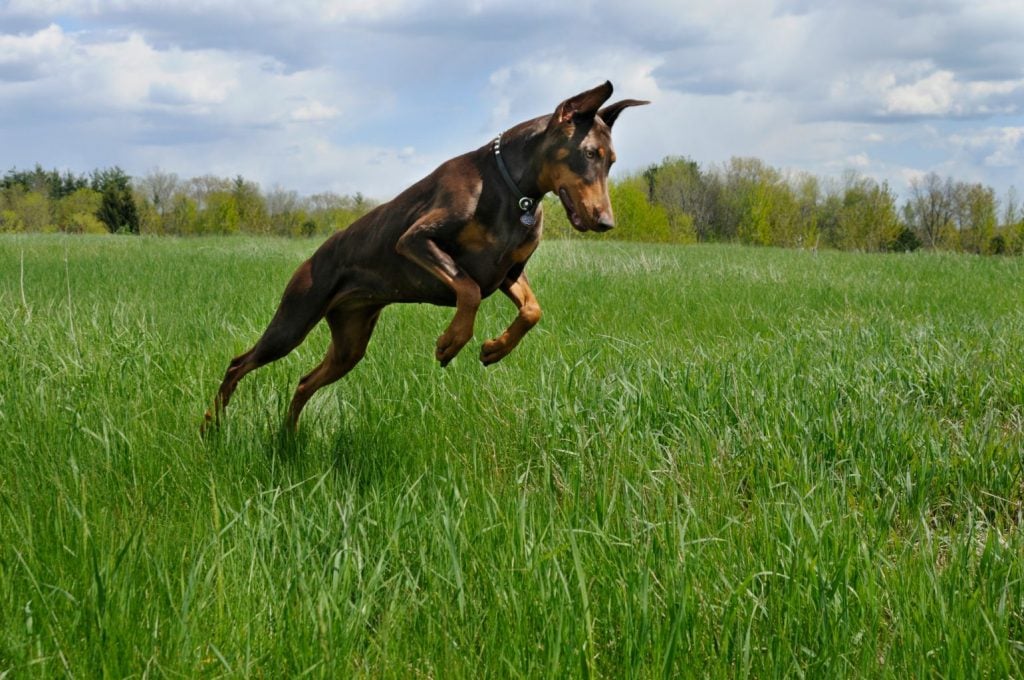 Doberman Pinschers are highly loyal and protective of their owners and make very affectionate pets if they get the right training and environment. They were bred to be guardians, and as a result, some Dobermans will only create a bond with one human. Doberman Pinschers do not generally get on with other dogs as they tend to like to dominate. Some also enjoy chasing cats and other smaller animals. For these reasons, it's important to keep this dog on a leash when out for a walk. 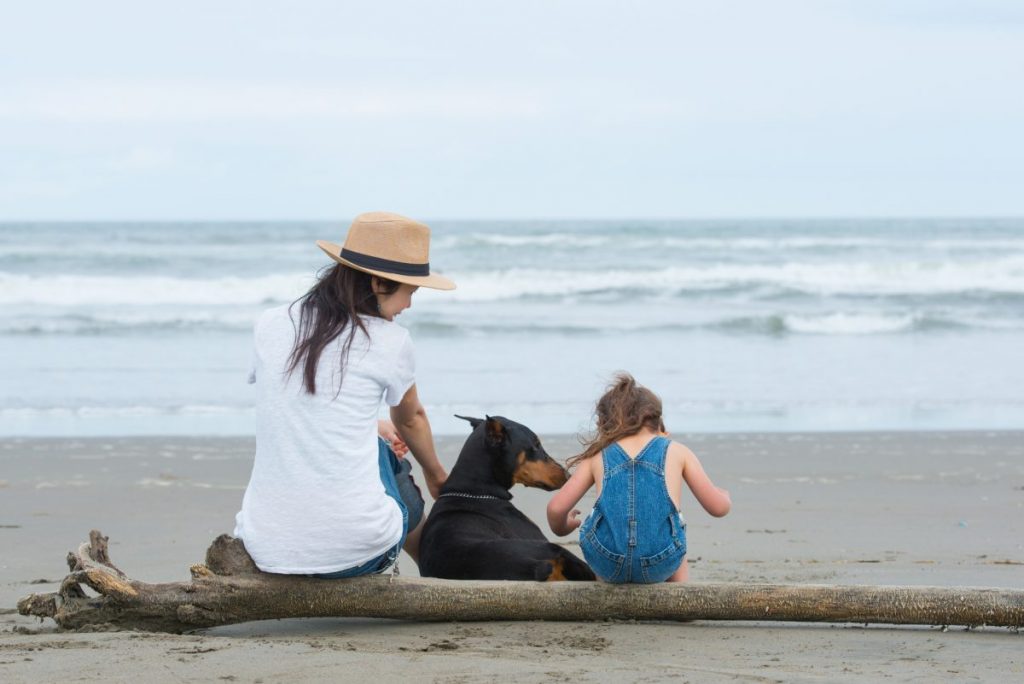 Doberman Pinschers are a misunderstood dog for many, as they have gained a reputation for being highly aggressive. Indeed, they were originally bred to be fierce and intimidating for the purposes of personal protection. However, over the years, the more aggressive traits have been bred out of this breed, and Dobermans today are more good-natured and less aggressive than many breeds without such a reputation. Dobermans can occasionally become aggressive in the case of over-the-top discipline. They can also develop some behavioral issues, including aggression if they are not exercised and stimulated properly. 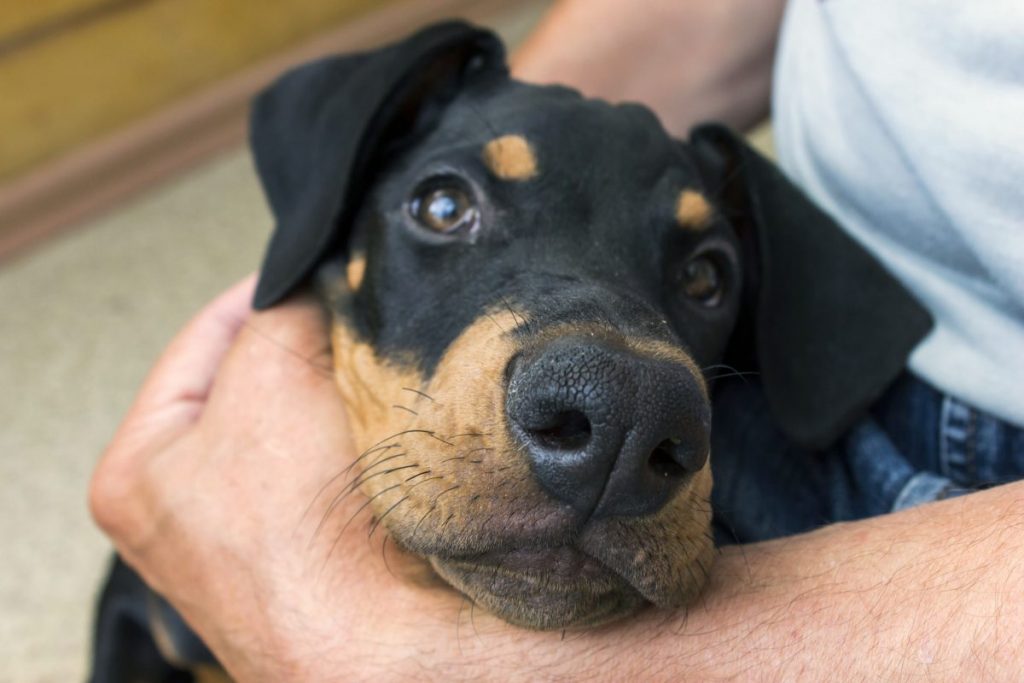 Doberman Pinschers need socializing from a very young age, and it is essential to give them consistent training with a great deal of positive reinforcement. Because they love to keep their owners happy, they can be easy to train when started at the right age. When they are puppies, they need to know that their owner is the pack leader, meaning that respectful, but firm training is the key. 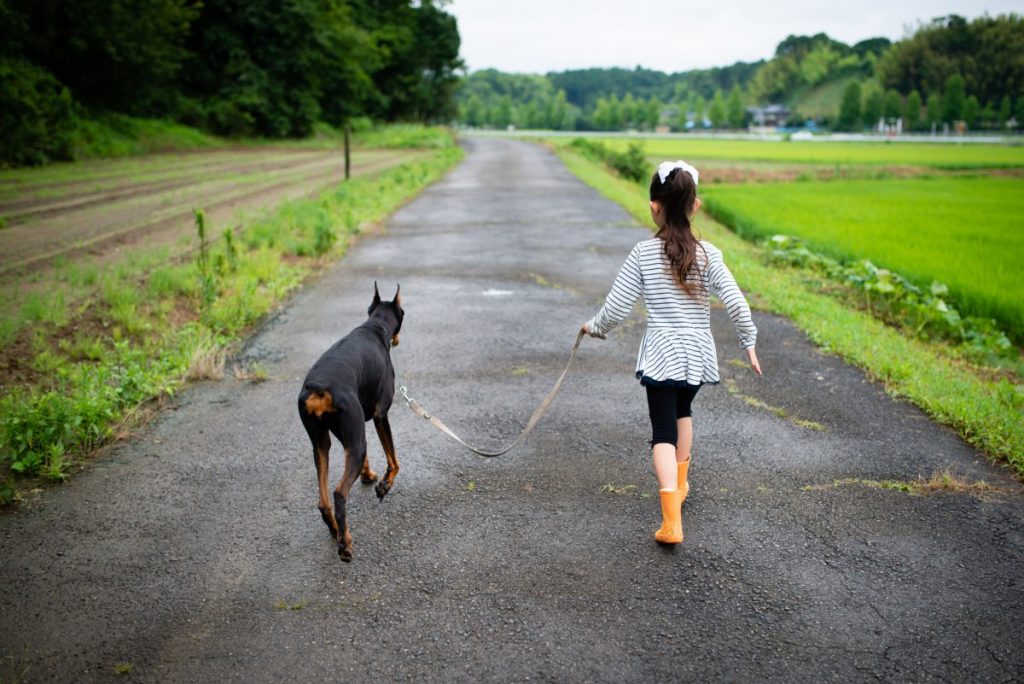 The Doberman Pinscher is a relatively new breed of dog, having been bred in 1870 by a German tax collector called Karl Friedrich Louis Dobermann. It was thought that he began to breed these dogs as guardian dogs for people with occupations that were considered dangerous at the time, such as tax collectors, night watchmen, and rent collectors. Doberman Pinschers are believed to be bred from dogs such as the German Shepherd, Manchester Terrier, and Greyhound, amongst others. 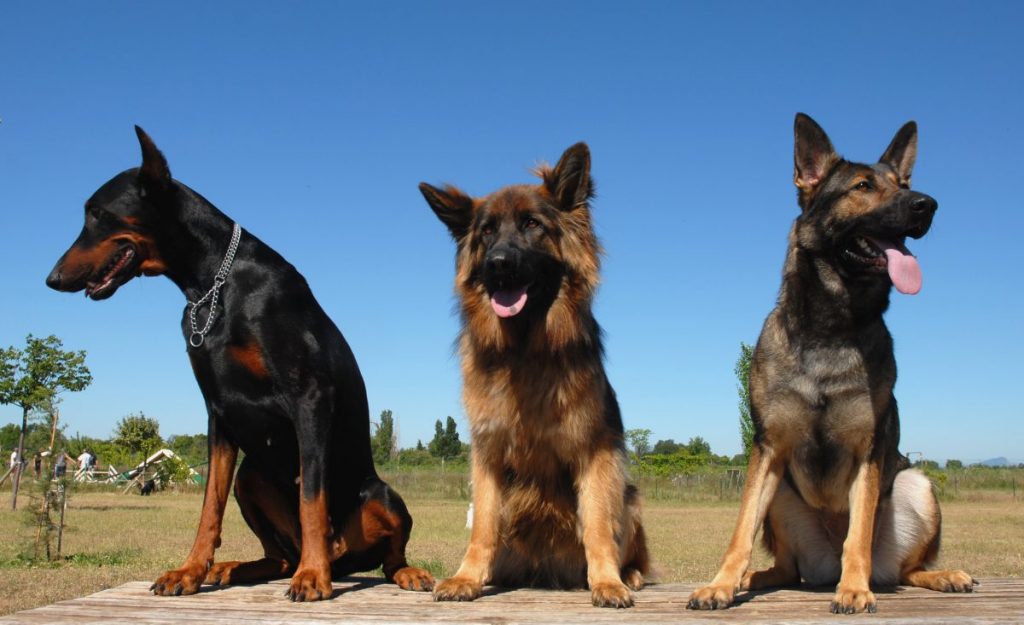 Like most pedigree dogs, Dobermans suffer from some health problems as a result of selective breeding. Dilated cardiomyopathy, or enlarged heart, is a very common and potentially fatal issue. They are also prone to hip problems, a blood clotting disorder called von Willebrand's disease, skin problems, and a type of bone cancer called osteosarcoma. Some genetic tests are now available for checking for these types of health problems. 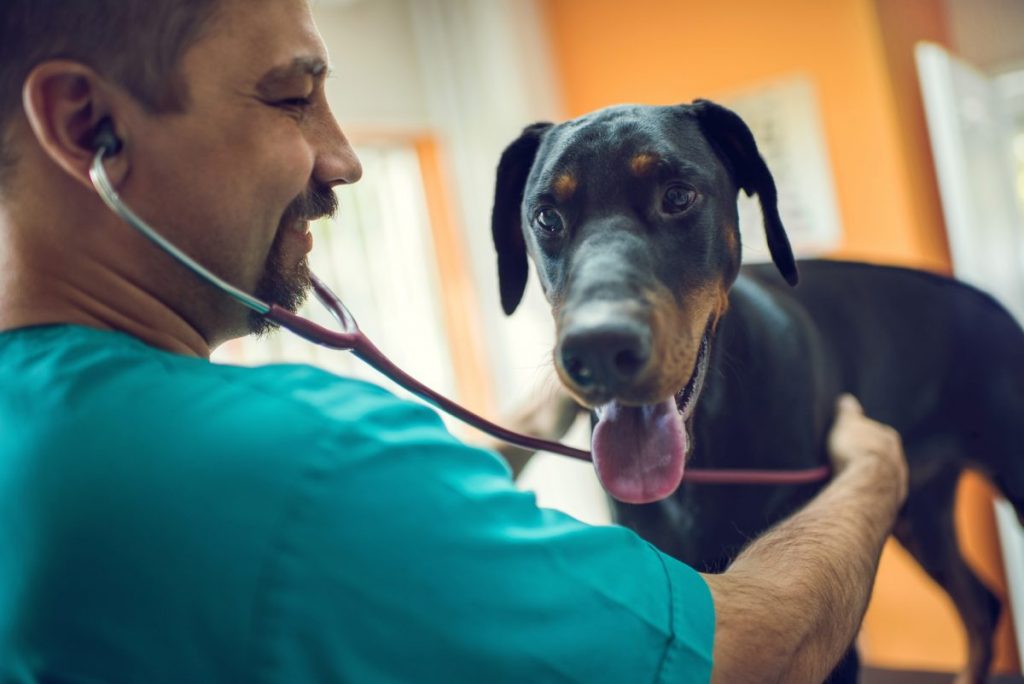 Caring for a Doberman Pinscher

As well as exercise, it is prudent to take out health insurance for Dobermans and ensure that they get regular health checks with a veterinarian. Doberman Pinschers are short-haired dogs and do not require a huge amount of grooming. They can be wiped down with a moist cloth a few times a week. Dobermans like to chew, so it is important that the dog is provided with chew toys. The Doberman will also need their nails clipping regularly and their pads checking to ensure that they are healthy. 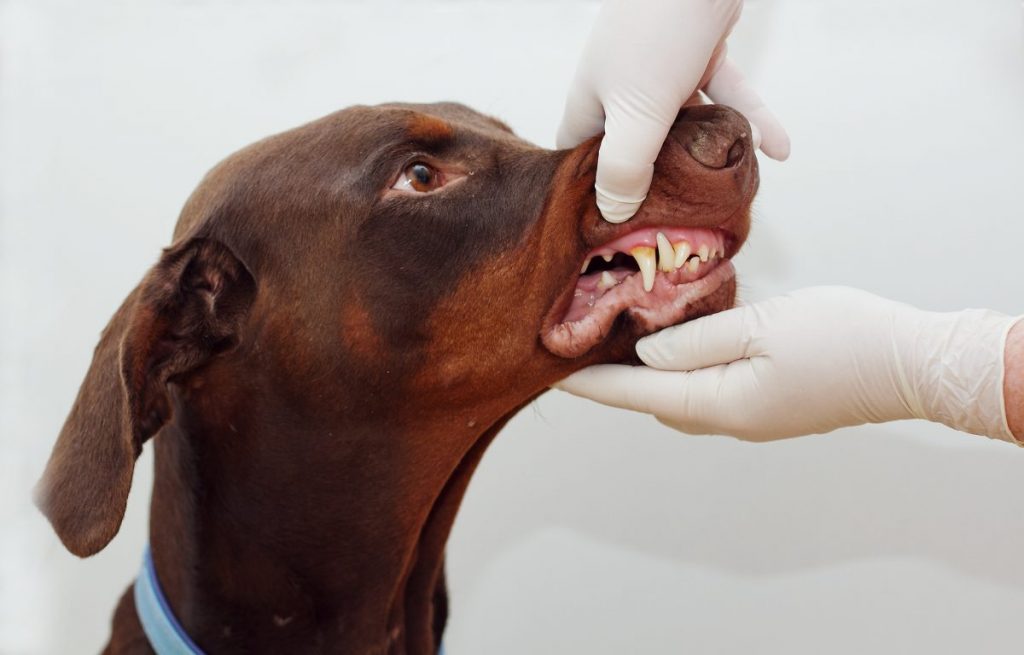 The peak of popularity for the Doberman Pinscher was the 1970s and 1980s, where the breed made it into the top ten list for the most popular dogs in the United States. Although they are no longer in the top ten, they were still the 16th most popular dog in the U.S. in 2017, according to the American Kennel Club. 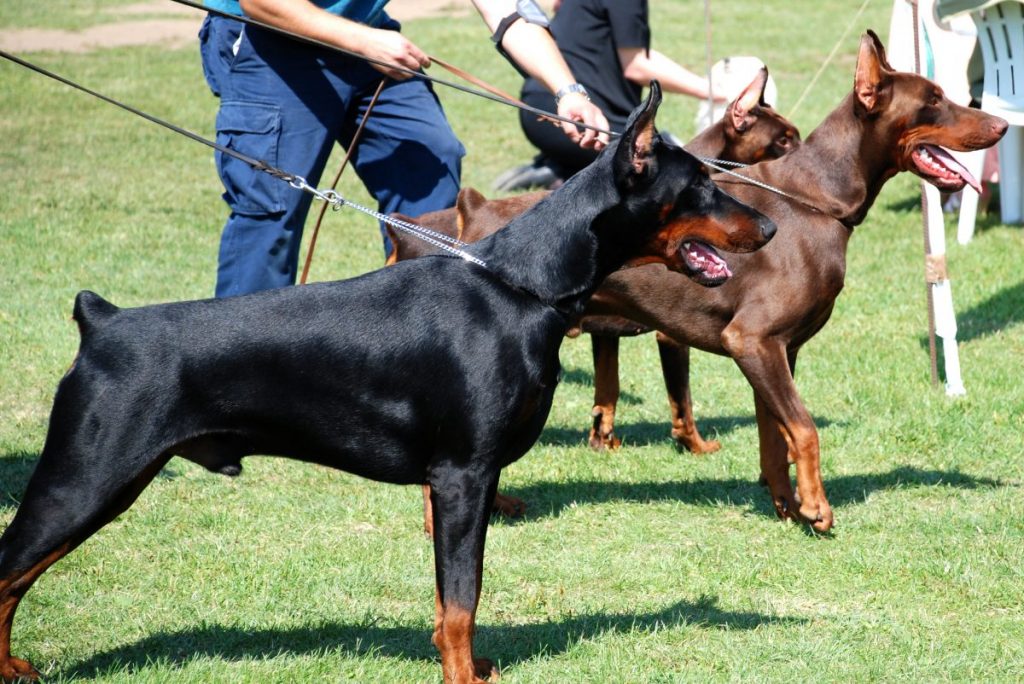 Dobermans have been bred as protection dogs, so, naturally, they do this kind of work. They are fierce, fast, loyal, and very smart, making them perfect for protecting large areas. In the 1960s, Dobermans were used in the police force as attack dogs in riots. At the time, they were bred to encourage their aggressive tendencies, which may have contributed to their reputation for aggression. This has changed considerably, along with police philosophies towards working dogs. Now, other breeds, such as German Shepherds, are preferred for police work, as compared to Dobermans, they can cope with a greater number of weather conditions, and they work better with other dogs. 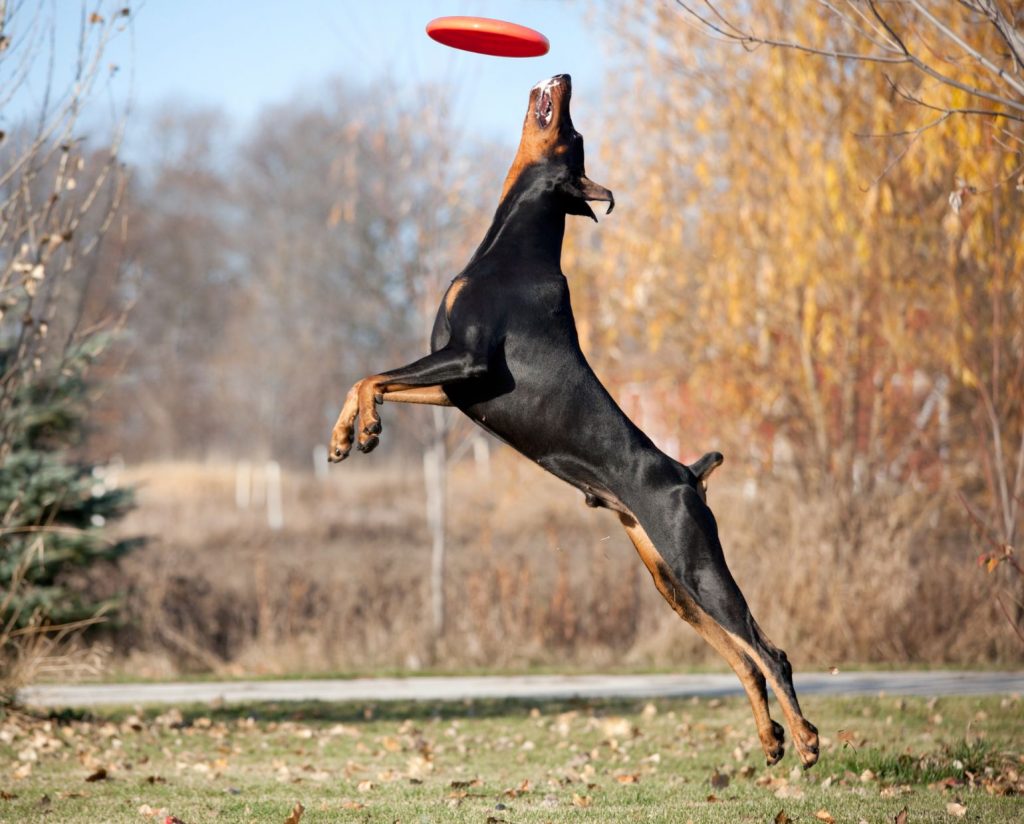 There are a number of famous Dobermans, including those first registered and several that have won famous dog shows and competitions. One notable Doberman is Cappy, a war dog, who saved 250 United States Marines in World War II. Famous people with Doberman Pinschers include Hunter S Thompson and President of the United States, John F. Kennedy. 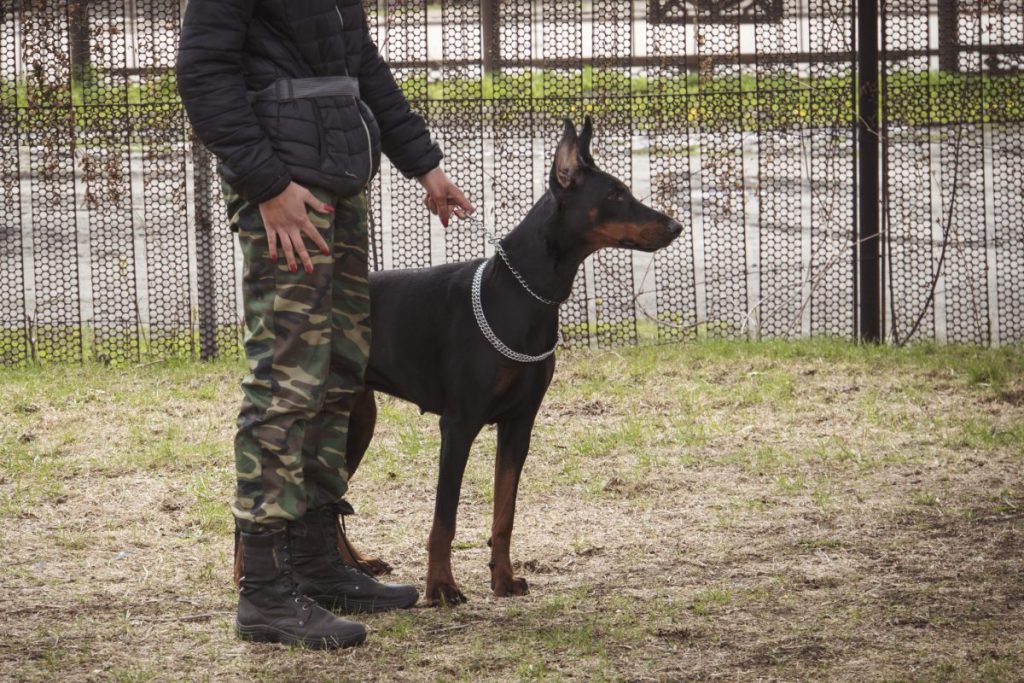