Exercises for Stretching the Hip Flexors

The hip flexors incorporate many muscles that influence movements in the lower back, pelvis, thighs, and hips, including the psoas and sartorius muscles. Tight hip flexors can cause lower back and hip pain and even injury. Stretching and strengthening these muscles can prevent injury while improving flexibility in one of the most mobile areas of the body. Always check with a doctor before beginning a new exercise regimen.

Begin in a seated position, folding both legs in front of the body with the soles of the feet touching. Sit upright and brace the abdominal muscles. Gently exhale and bend forward from the hips, allowing the elbows to rest gently on the thighs. Avoid rounding the back. Hold this position for 15 to 30 seconds before relaxing and repeating the exercise. 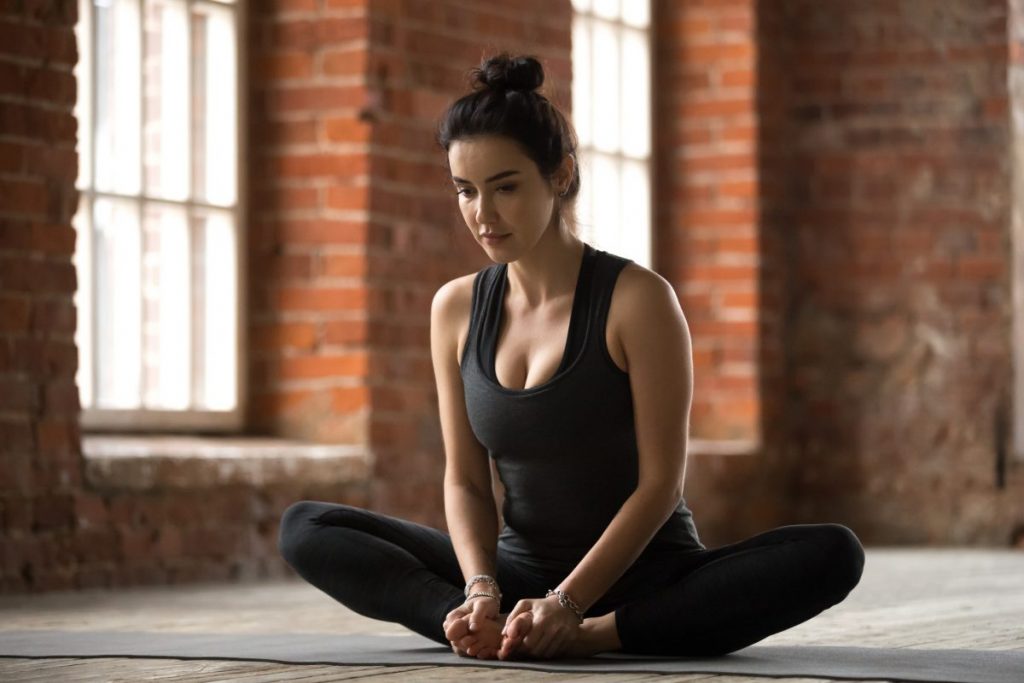 Lie supine on a flat surface with both knees bent and the feet flat on the floor. Both feet should be about hip-width apart. Contract the abdominal muscles and gently exhale while pressing into the feet to raise the hips off of the floor. This should contract the gluteal muscles. The body should remain relatively straight from shoulder to knee. Hold this position for 30 seconds before relaxing. 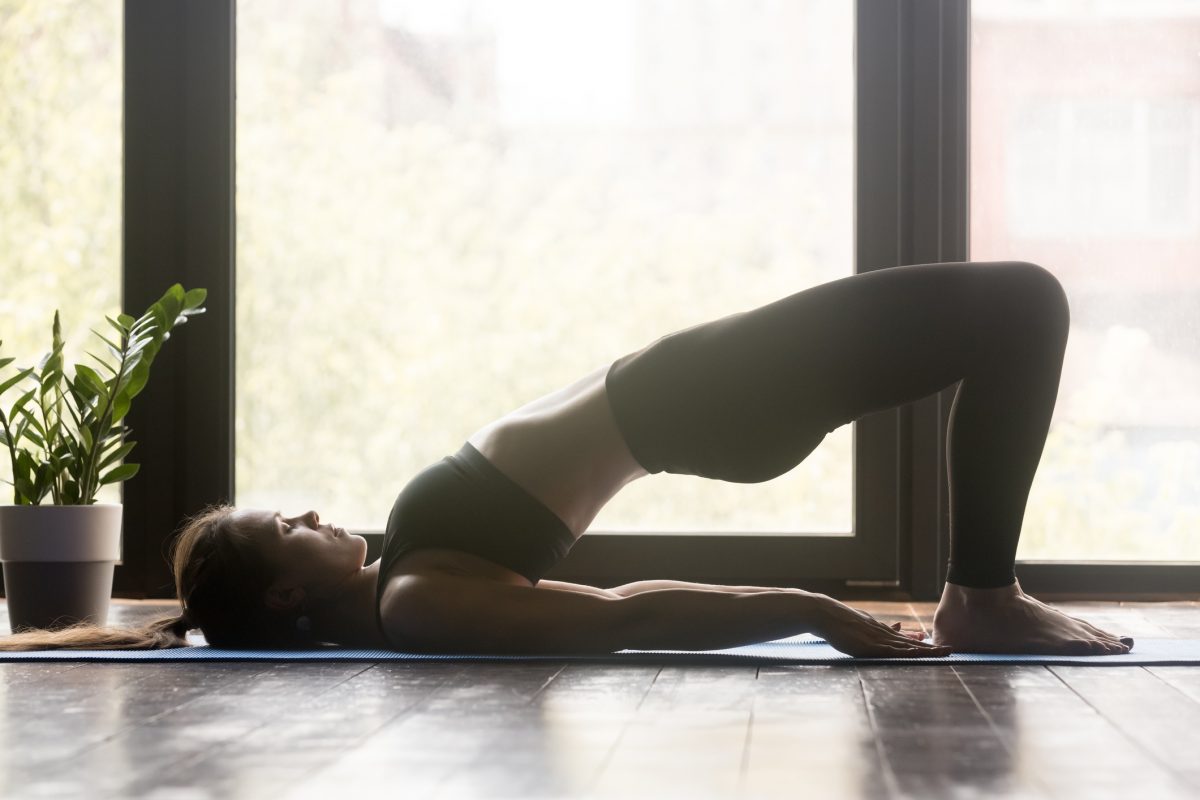 Starting from the push-up position or downward-facing dog, step or walk the right foot up between the hands. The knee should bend at roughly a 90-degree angle. Lower the left knee to the floor, sliding it along the ground until there is a slight stretching sensation in the thigh and groin. Lift the torso upright while sweeping the arms up from the ground. Hold both palms together above the head for 30 seconds while breathing deeply. Relax and repeat with the left leg. 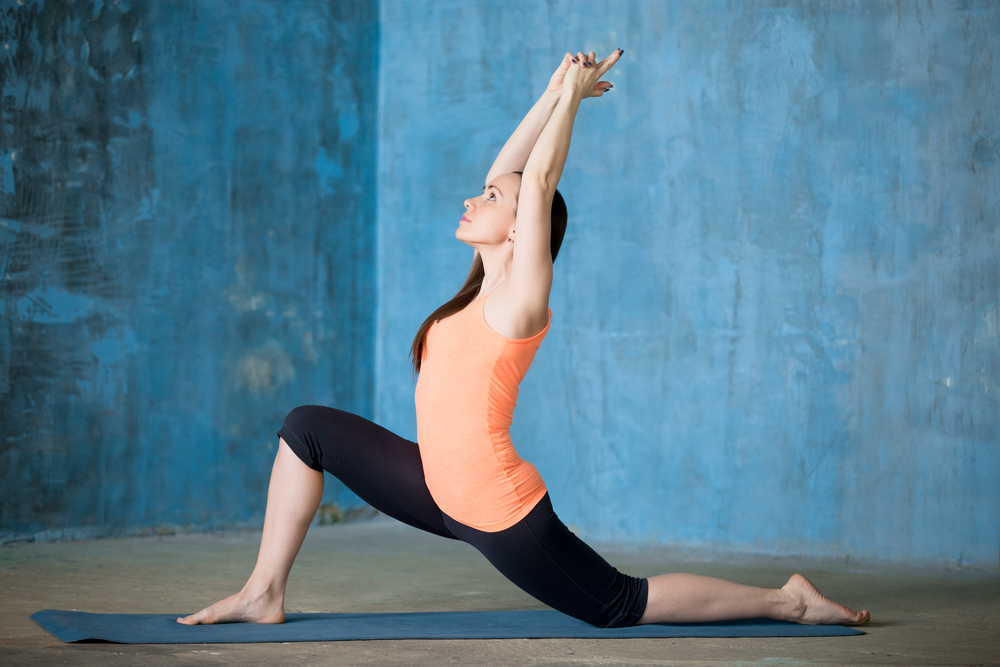 Begin in table-top position and slowly slide both knees out to either side. Steadily move the hands forward as far as is comfortable. If necessary, place a pillow or towel under the arms or the groin. The hips should be on the same plane as the knees and the belly should not relax on the floor. Hold for up to two minutes before carefully coming out of the pose. 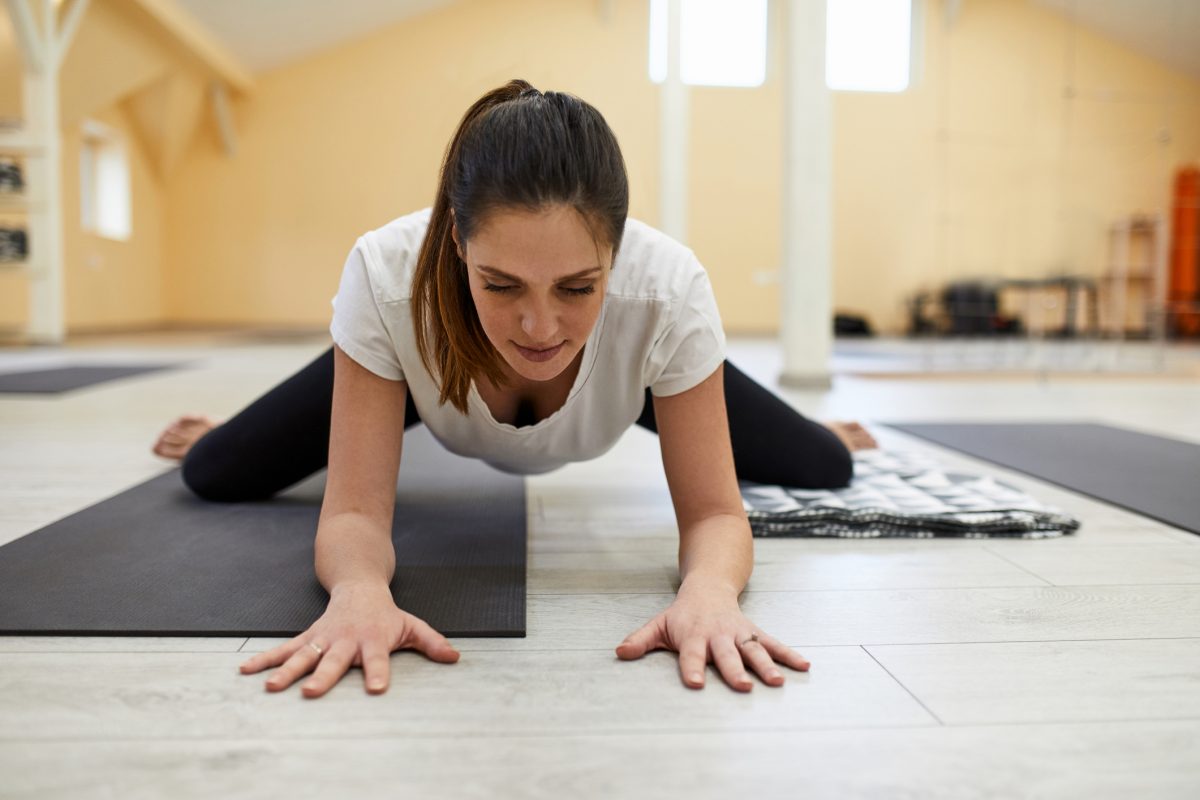 Lie supine with both arms resting on either side of the body. Place both hands palm down on the floor. Some people find it helpful to place their hands under their buttocks. Pressing up with the forearms, gently lift the chest toward the ceiling and carefully drop the head back, placing the back of the head or crown on the ground. Hold this position for at least three deep breaths before relaxing. Avoid overextending the head or back. 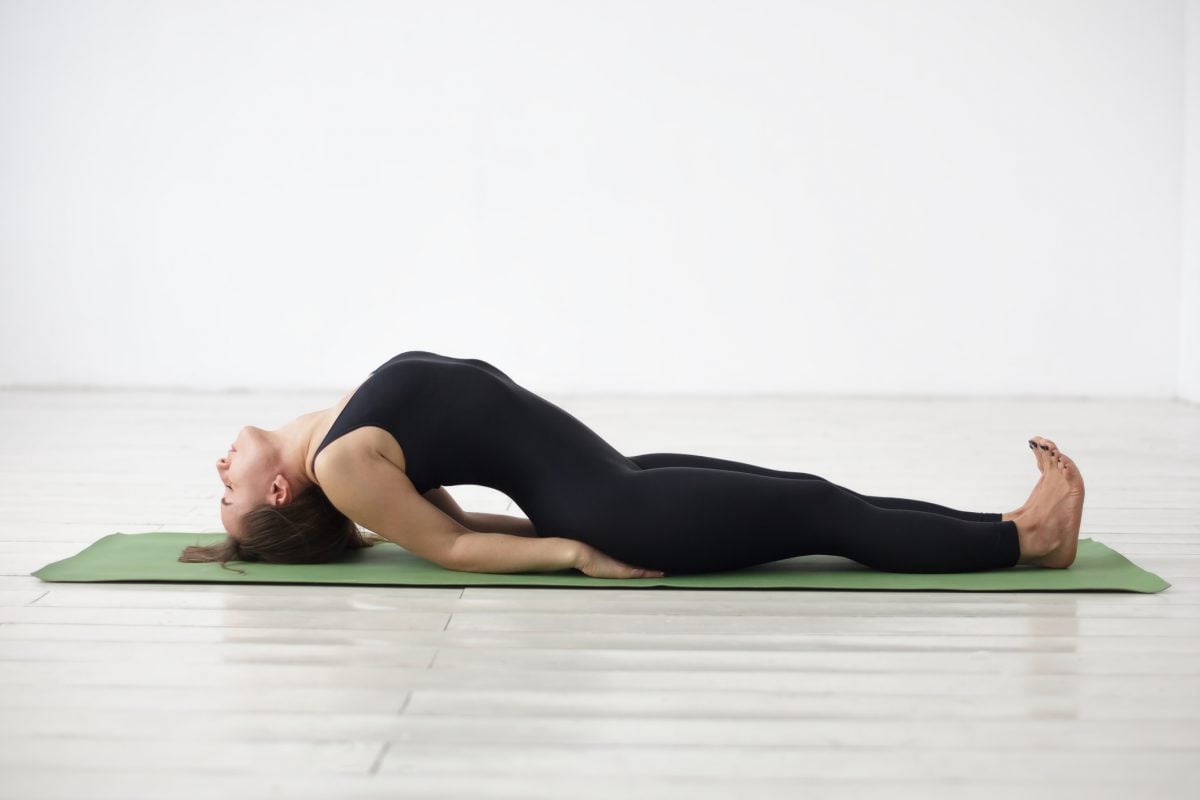 From a standing position, slowly lower into a squat. Rotate the thighs back until they are roughly parallel with each other and the floor. Keep lowering the body, separating the knees further to maintain balance if necessary. Tilt the torso forward, holding it between the inner thighs. Place the palms on the ground or press them together in front of the chest. Hold for 10 to 12 breaths before relaxing. 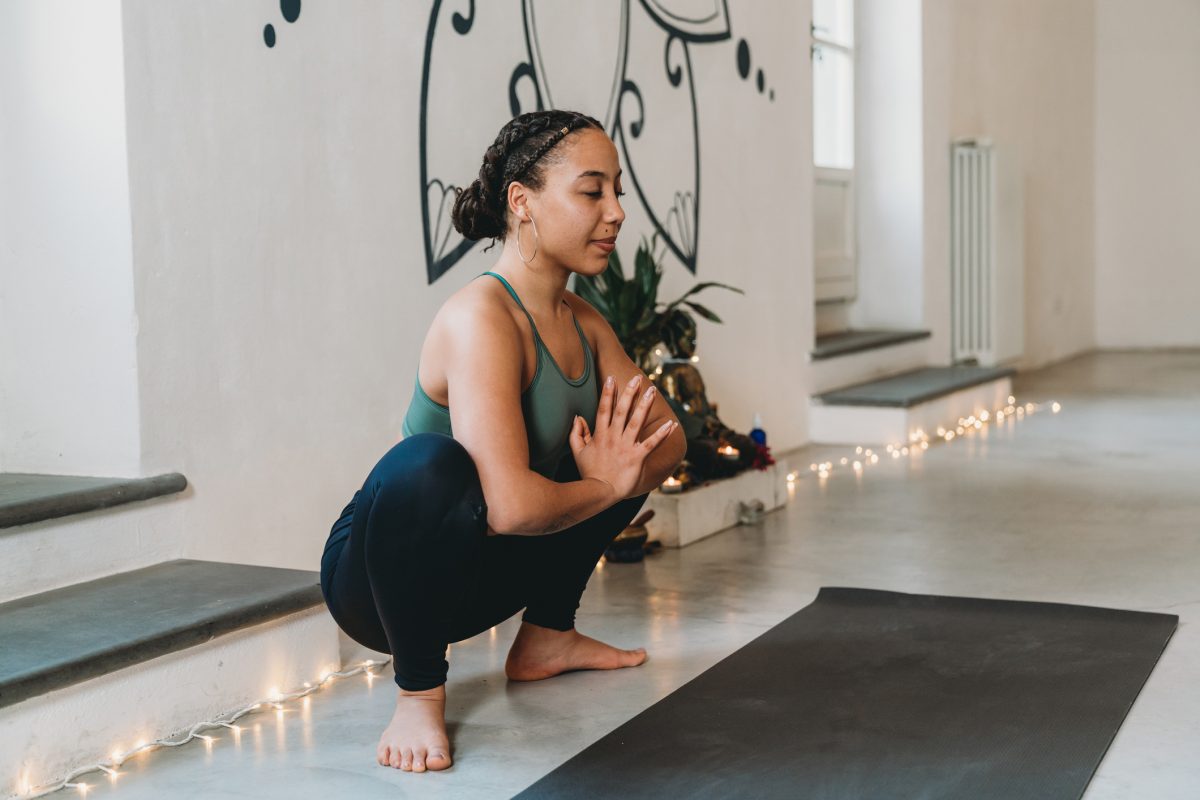 Lie on the stomach with arms resting close to the body. Bend both knees and lift the ankles toward the body. Grab both ankles, lifting the torso off of the ground. Do not twist the pelvis. Press both feet against the hands in opposition to lift the thighs and chest. Hold for up to 30 seconds, breathing deeply, and then relax. Less flexible people may choose to use straps or wrap a towel around the ankles to make this pose easier. 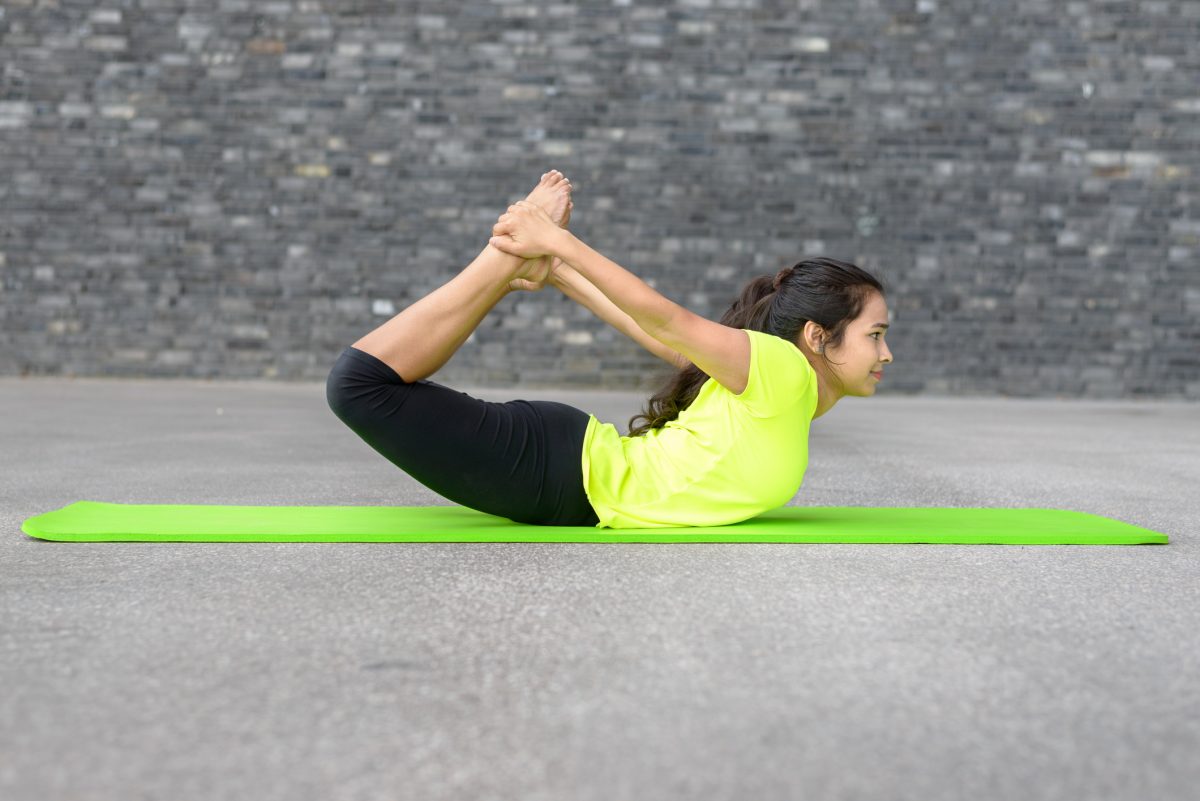 Start this yoga pose in a low lunge with the right leg forward. Walk the right foot over behind the left hand and carefully lower the knee to behind the right wrist. Place a pillow or towel under the right or left hip if it cannot rest on the ground, and try to keep the hips level, not tipping up. Stay up on the hands, or lower onto the forearms. Hold this position for up to a minute before relaxing and repeating on the left side. 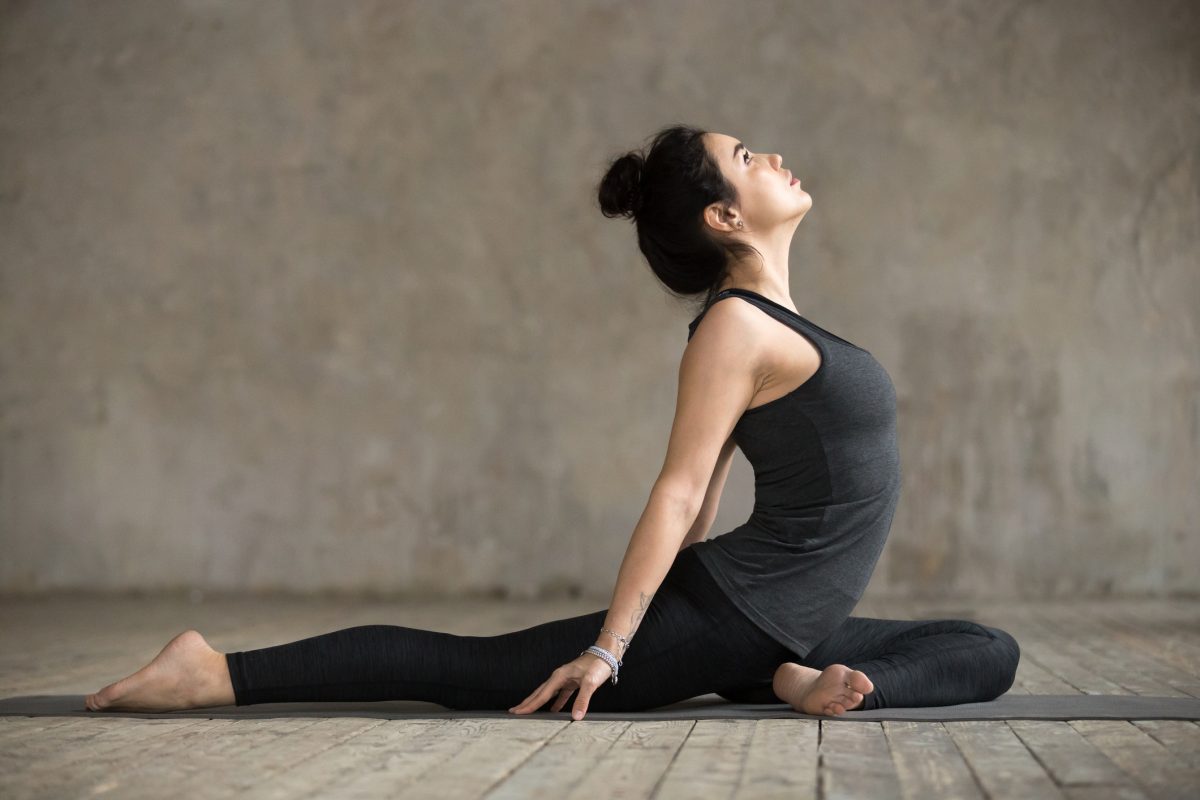 Kneel on a flat surface with knees and feet hip-width apart, toes tucked. Press the tips of each toe against the ground for balance. Place the hands fingers-down in the small of the back. Without rotating the pelvis, raise the chest up and bend back slightly. Once you have bent back as far as possible, remove the hands and place them on the heels if this is available. Press the hips forward to keep a straight line from hips to knees. Tip the head back only if this does not strain the neck. 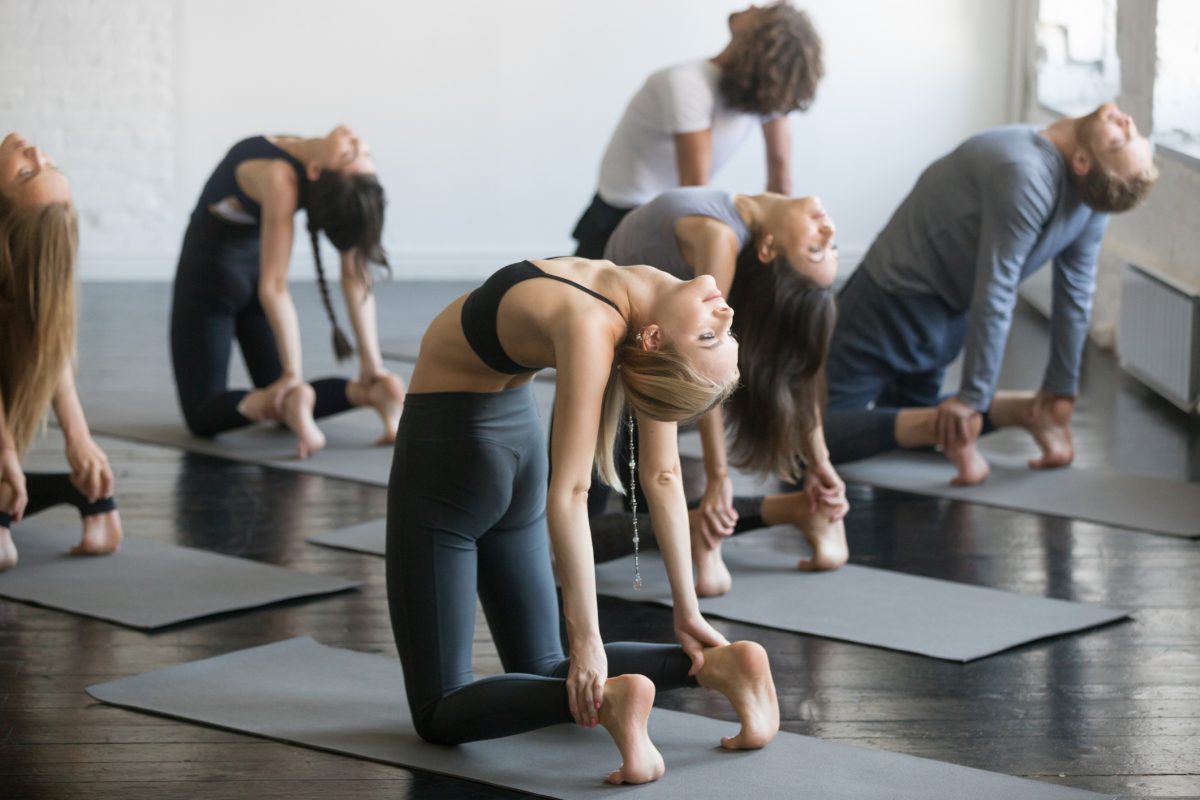 Begin in a standing position and slide both feet to either side. When the feet are around three feet apart, turn the right toes out 90 degrees and the left toes slightly inward. Hold both arms out to the side at shoulder-height. Press the left hip out to the side and stretch the extended arm to the right. At the full extension, tilt down to place the right hand on the shin, a block, or the floor. Do not rest the hand on the knee joint. Look straight ahead or up at the raised left fingertips. Maintain a tiny bend in the right knee to keep from locking the joint. Hold the pose for at least five breaths before repeating on the opposite side. 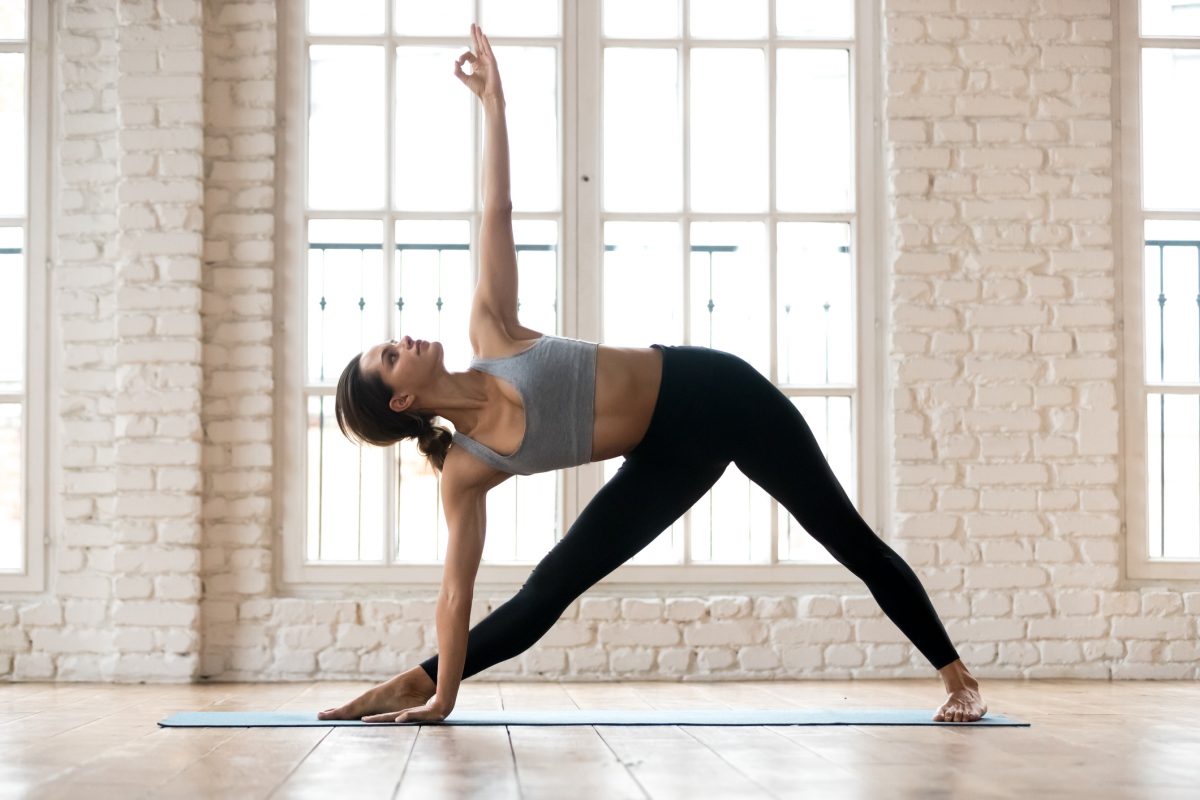