How to Prevent Holiday Food-Borne Illnesses

Each year, 48 million people eat something that causes foodborne illness. During the holiday season, food is an essential part of the celebration, and popular holiday foods can harbor microbes that make people sick if not stored, thawed, or cooked correctly. Good handwashing practices and following the food safety experts’ recommendations for handling and preparing food is essential to a safe holiday eating experience. Knowing how long those leftovers will last in the refrigerator can also help prevent food poisoning.

Salmonella causes about 70% of food poisoning outbreaks. According to food safety research, salmonella exists in a variety of cooked and raw foods. Raw poultry also contains Campylobacter, and other types of bacteria — E. coli and Yersinia — are present in some meat. Even fresh produce may harbor Listeria and harmful germs such as Salmonella and E.coli. Improperly home-canned goods can cause botulism, although this is rare.

The good news is, proper food handling and clean preparation surfaces can prevent most types of bacteria from ruining a holiday feast. According to food safety guidelines, the “danger zone” for foods is 40 to 140 degrees, the temperature at which illness-causing bacteria flourish. Refrigerate cooked foods within two hours to prevent bacteria from growing. 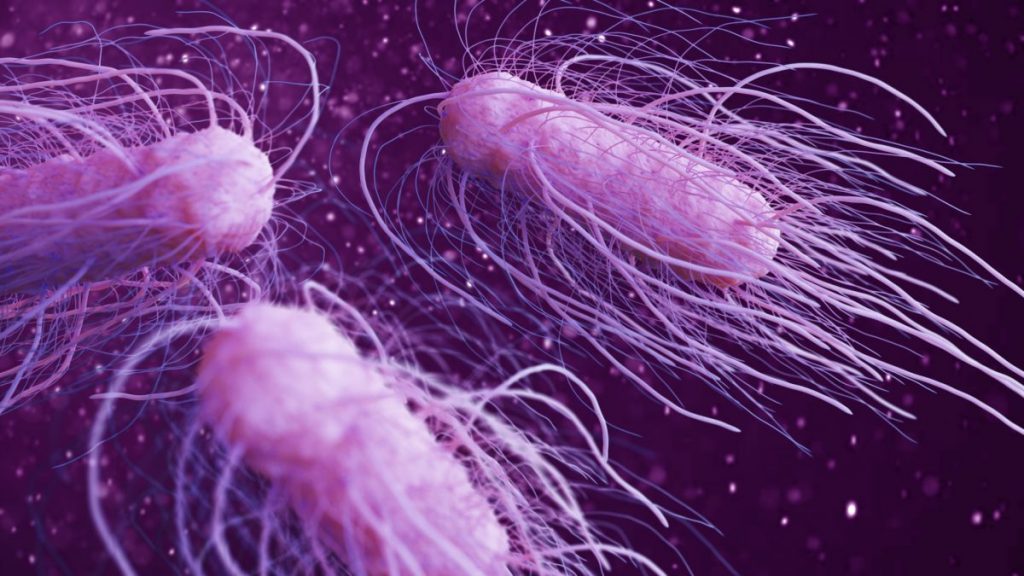 Thawing the turkey is usually the first step in meal preparation, but it can be tricky. There are three methods of safely thawing a turkey: in a container in the refrigerator, in a sealed plastic bag in a sink of regularly changed cold water, or the microwave. One of the biggest mistakes cooks make when handling thawed, raw turkey is to wash it in the sink before starting the cooking process. This practice spreads bacteria present in the meat and does nothing to prevent food poisoning. The bacteria can infect prep surfaces, utensils, and other foods.

Never cook a turkey at less than 325 degrees. Use a thermometer to ensure the internal temperature reaches 165 degrees at the thickest part of the breast before serving. 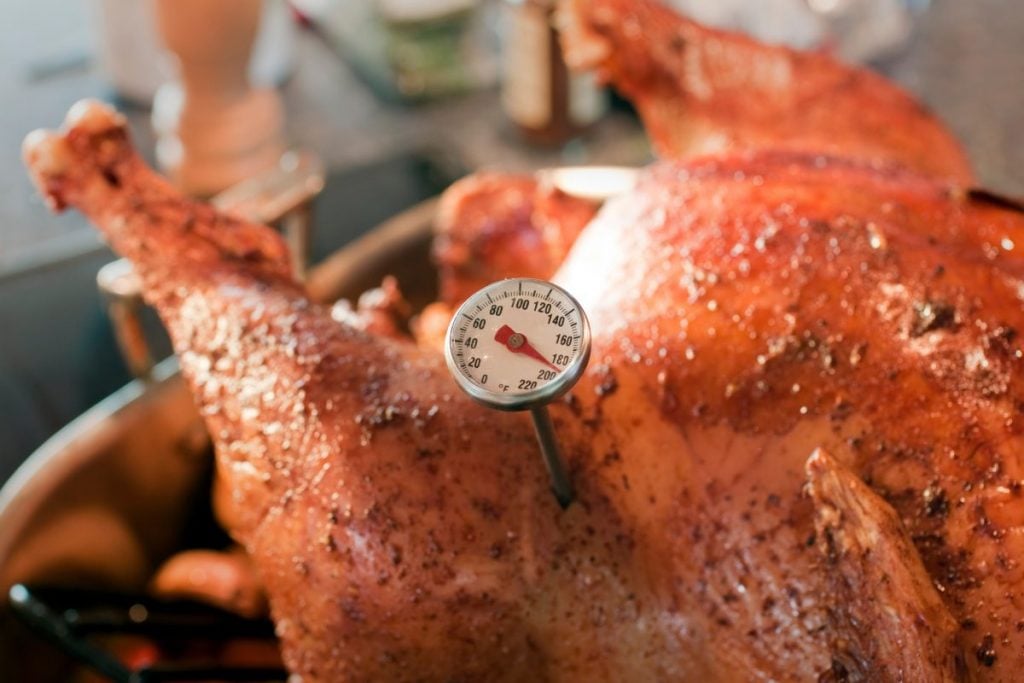 Store uncooked, pre-cooked, or spiral-sliced ham safely in the refrigerator for three to five days before cooking. Serve hot, pre-cooked hams immediately or divide and refrigerate as soon as possible after purchase. Bake ham at a temperature of at least 325 degrees, and use a thermometer to ensure the internal temperature is between 140 degrees for a USDA-inspected ham. If your ham doesn't have this designation, bake until the thermometer reads at least 165 degrees before serving.

Contrary to popular opinion, cured ham does not have a longer shelf life in the refrigerator. Discard any leftover ham after three or four days to prevent food poisoning. 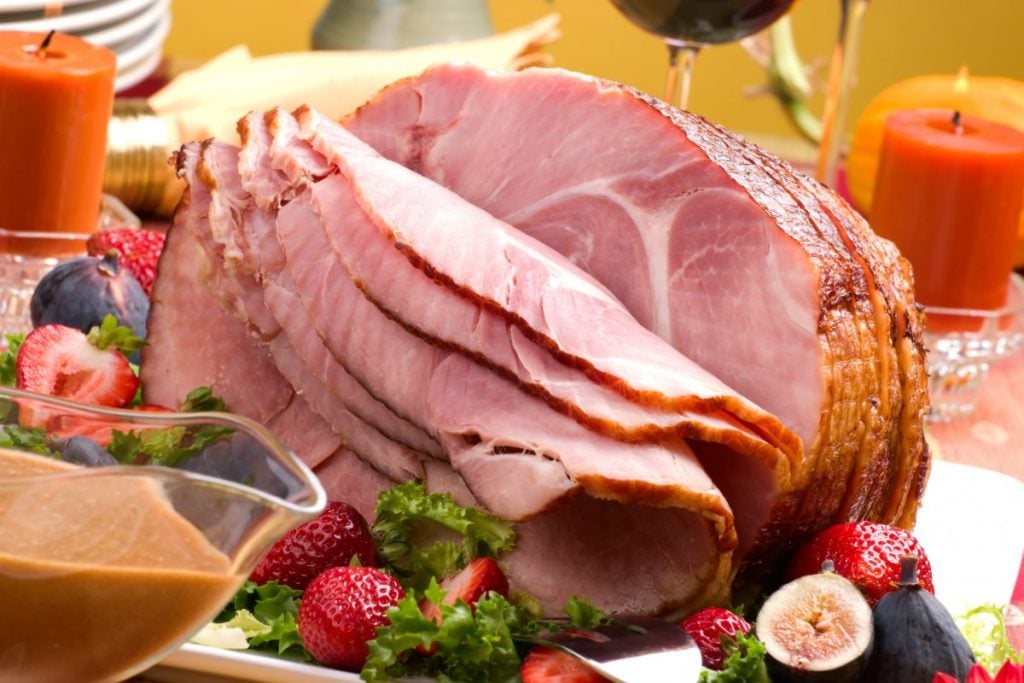 Dates on food packages are “purchase by” dates, and not a date that indicates the amount of safe storage time in home refrigerators. Dates on meat indicate peak quality rather than the safety of the food. A change in meat or poultry color alone is not always an indicator of spoilage, according to the USDA. Spoiled meat is sticky to-the-touch and has an off-odor. A thawed, raw turkey can remain in the refrigerator for only one to two days. Store turkey or ham safely in the fridge for three to four days. Most meat experts advise that cooked ham and turkey can be safely frozen for two to three months and still maintain their quality. Heat leftovers thoroughly and never reheat more than once. Discard stuffing and meat gravy after two days. 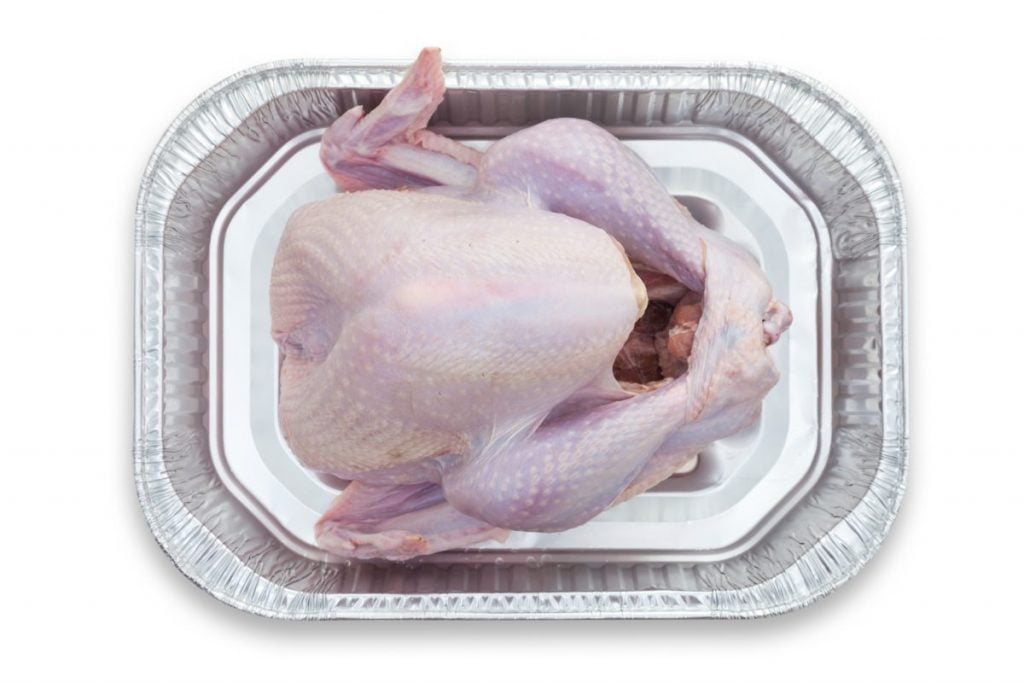 Safe Use of Eggs

Microbes that cause foodborne illnesses love many of the foods served during the holidays, and eggs are no exception. From hollandaise sauce to homemade eggnog, many celebratory recipes call for raw eggs. Always choose pasteurized varieties to prevent bacteria that may remain on unpasteurized eggs. Salmonella and other germs live on both the outside shell and the inside of eggs. In most states, eggs also feature a “packed by” date if they are USDA-grade. Eggs refrigerated at 45 degrees or lower are safe to eat or add to recipes for four to five weeks past the “packed by” date, according to the FDA egg safety rule. 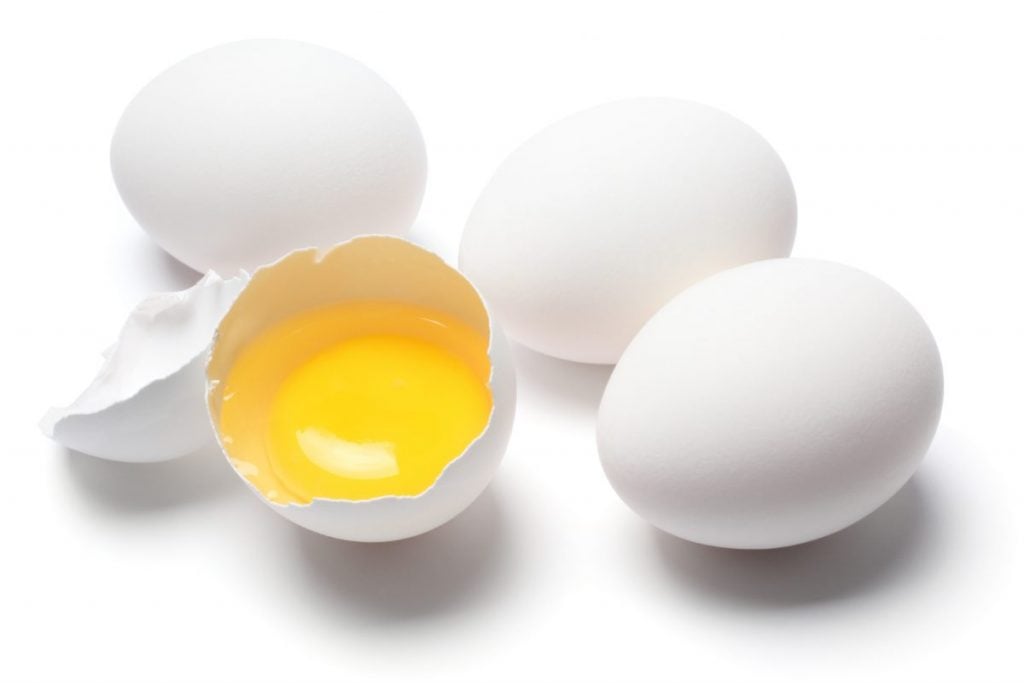 For years, food safety agencies advised cooks not to taste-test homemade cookie dough or cake batter due to the danger of eating raw eggs. Today, these professionals say the main concern is not the raw eggs, but the raw flour. Shiga toxin-producing E. coli, or STEC, contaminates raw flour during the milling process. Producers use grain that is directly harvested from the field to create flour. These companies do not treat the grain to kill the existing bacteria, which may include animal waste. The bacteria ends up in the raw flour. Home bakers should bake cookies and cakes thoroughly to avoid foodborne illness. Always wash hands before and after handling raw flour. 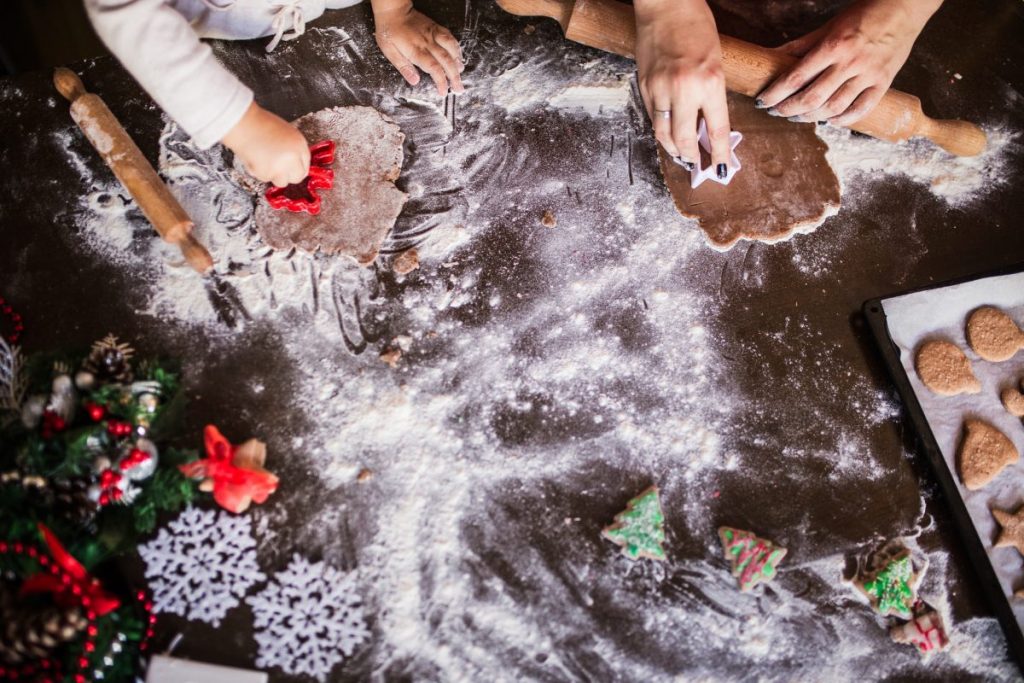 Unwashed produce can harbor Salmonella, E. coli, Listeria and other bacteria. Wash fruits and vegetables before peeling, eating, cutting, or cooking. Cooks should scrub apples, cucumbers, and other firm-skinned produce under running tap water to remove surface bacteria. Microorganisms on the outside skins of fruits and vegetables can transfer to the peeler or the knife, so wash cooking tools with soapy water between uses. Keep produce away from raw meat, poultry, and seafood to prevent cross-contamination. Clean all preparation surfaces thoroughly before cutting vegetables or fruits. 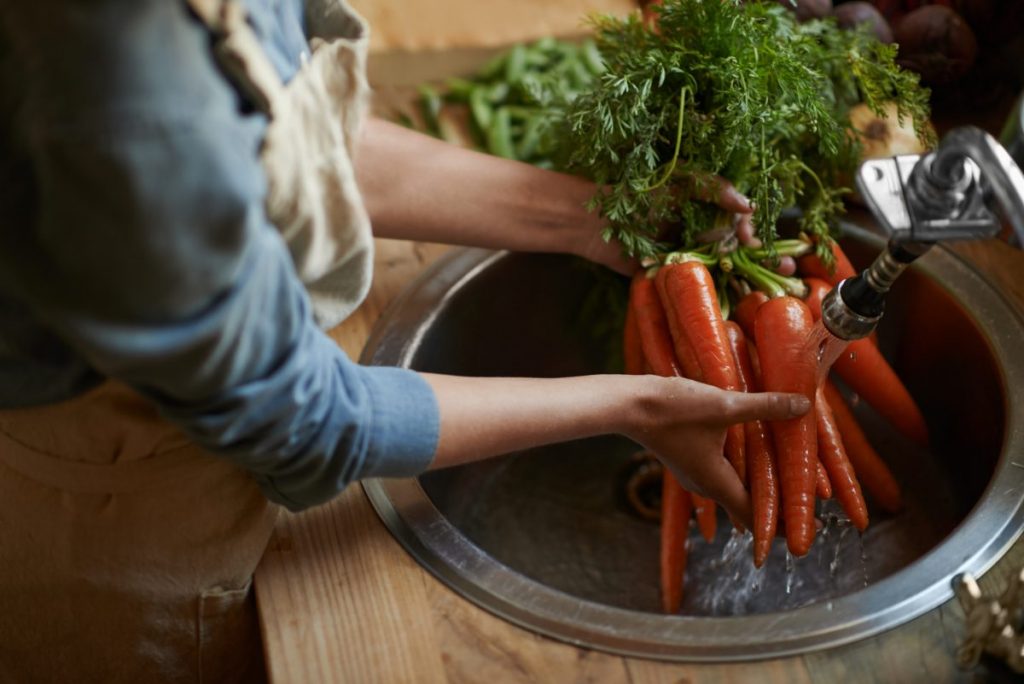 Many families enjoy a variety of shellfish during the holiday season, from seafood appetizers to crab dips, to oyster stuffing. According to the Centers for Disease Control and Prevention, raw and undercooked shellfish puts diners at risk of infection. The problem is, bacteria in shellfish isn’t detectable. There is no bad taste, and it does not give off a strange odor. Each year, around 80,000 people in the U.S. contract a bacterial disease called vibriosis.

Cooking shellfish thoroughly is the only way to guard against the bacteria. Purchase fresh seafood from a reliable source, and discard any shellfish that does not open during the cooking process. Wash hands and surfaces thoroughly before and after handling raw seafood. 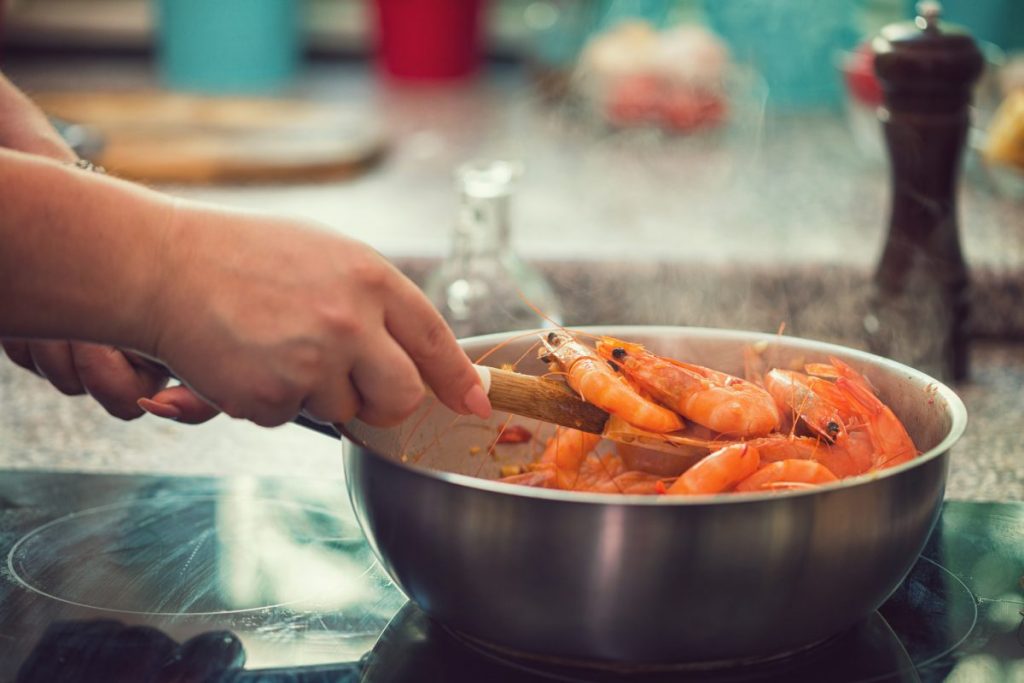 Family potlucks or picnics can require transporting food to another location, and if bacteria-prone foods aren't kept at 140 degrees, some people could have a less-than-happy holiday. Insulated carriers work well for temperature control. Wrap foods in foil or store them in a cooler, which not only keeps cold food cold, but it also helps hot food stay warm. Cold foods should maintain a temperature of 40 degrees or below; add ice packs or frozen gel packs to maintain a safe temperature, and store them in a cooler for up to 30 minutes. As a general rule, avoid transporting perishable foods if the trip takes longer than half an hour. 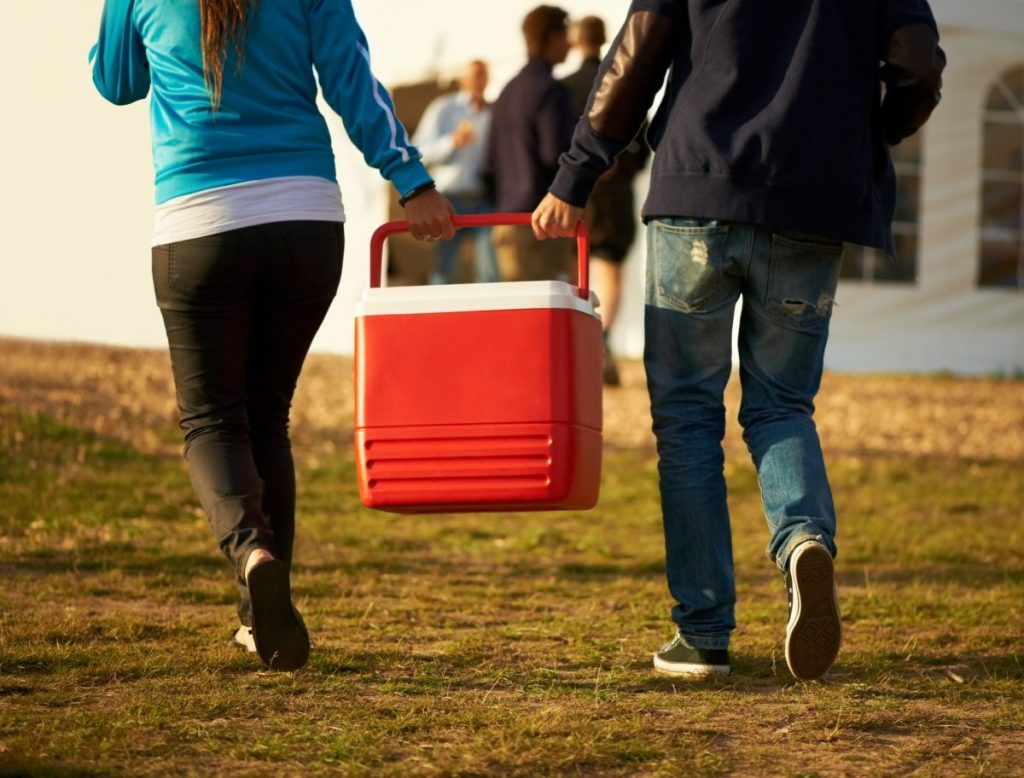 It is not uncommon for a variety of cooks to contribute dishes to a holiday meal or event. There are more than 250 foodborne illnesses, so there is always a chance of contracting food poisoning. In most cases, medical intervention is not necessary unless the symptoms become severe. Guests should use caution when eating foods such as raw oysters, egg drinks, soft-boiled eggs, or rare meats. The common symptoms of foodborne illness include

Pregnant women, older adults, young children, and those with suppressed immune systems are at higher risk of more serious complications from food poisoning. 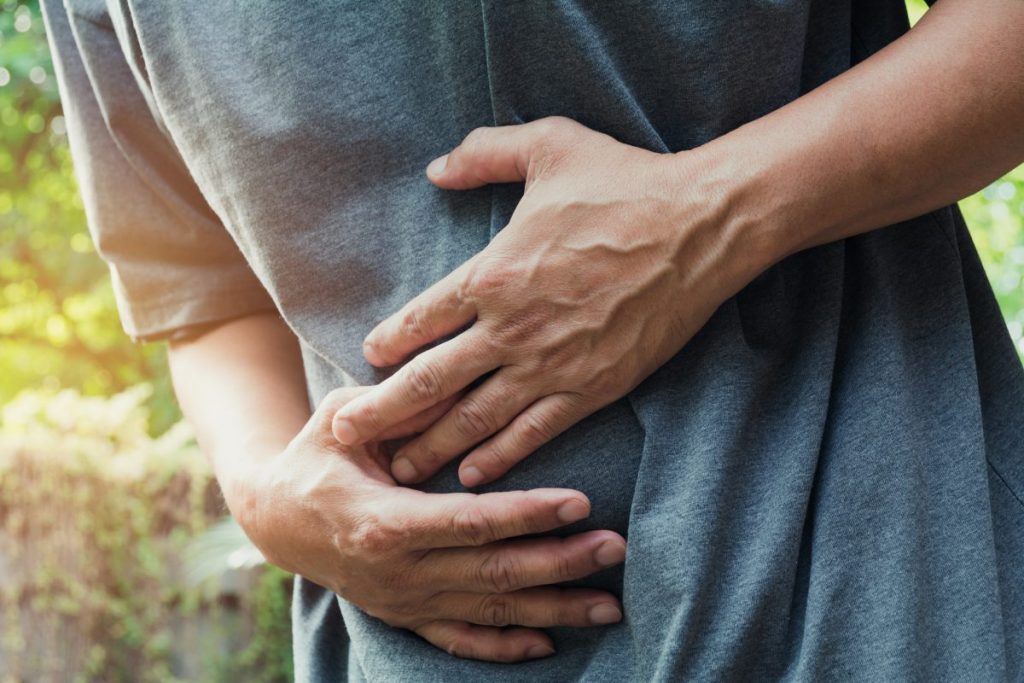