10 Symptoms of a Hiatal Hernia

A hernia occurs when body tissue or part of an organ abnormally exits through the wall of its original cavity. A hiatal hernia describes the upper part of the stomach slipping through the opening in the diaphragm into the middle compartment of the chest. Because the diaphragm prevents stomach acid from rising into the esophagus, a hiatal hernia can have various acid-related side effects. If the herniation is severe, more serious complications or symptoms can develop. Hiatal hernias often don't cause symptoms when they're small, which is why many people are unaware they have one.

Many physicians refer to hiatal hernias as the great mimics because the symptoms of this condition can resemble many different disorders. For example, a hiatal hernia and a heart attack both cause chest pain, shortness of breath, and nausea. Many other abdominal or stomach conditions have these symptoms as well. Physicians can determine whether the issues are the result of a hernia through x-rays or an endoscopy. 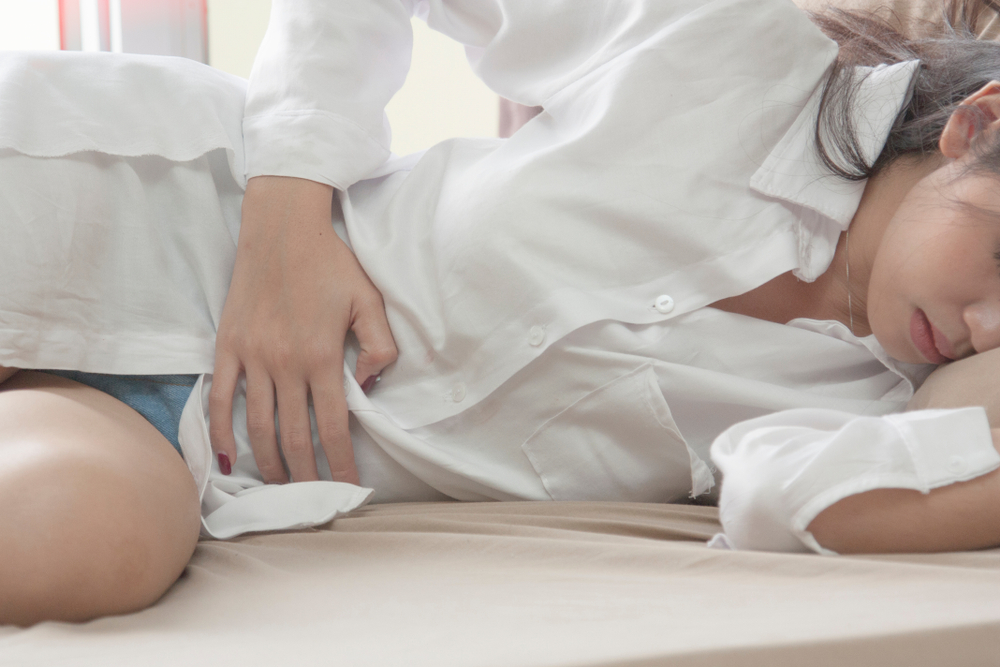 Normally, the lower esophageal sphincter prevents the stomach contents from entering the esophagus. However, a hiatal hernia can cause the sphincter to weaken, allowing materials from the stomach to flow backward into the back of the throat. Nausea doesn't typically accompany regurgitation, though it may be a separate symptom. In some cases, it is possible to regurgitate a tasteless fluid that contains mucus and undigested food, but regurgitation of sour or bitter liquid is the most common. 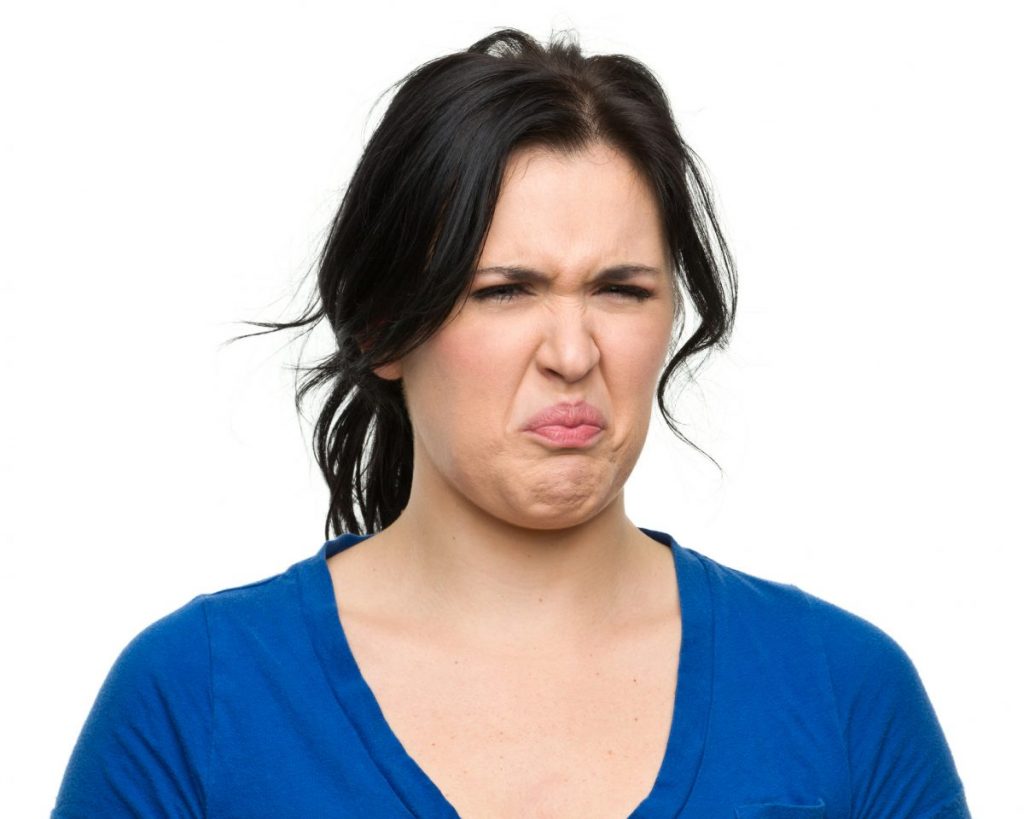 Many conditions can cause heartburn. Usually, this uncomfortable symptom consists of burning pain in the chest or lower throat that is often worse after eating, lying down, or bending over. Heartburn is common and is not usually symptomatic of a major issue. However, if heartburn occurs frequently, it could be a sign of a hiatal hernia. Hiatal hernias typically have few symptoms, and recurring heartburn could indicate a weakening of the lower esophageal sphincter due to an expanding hernia. 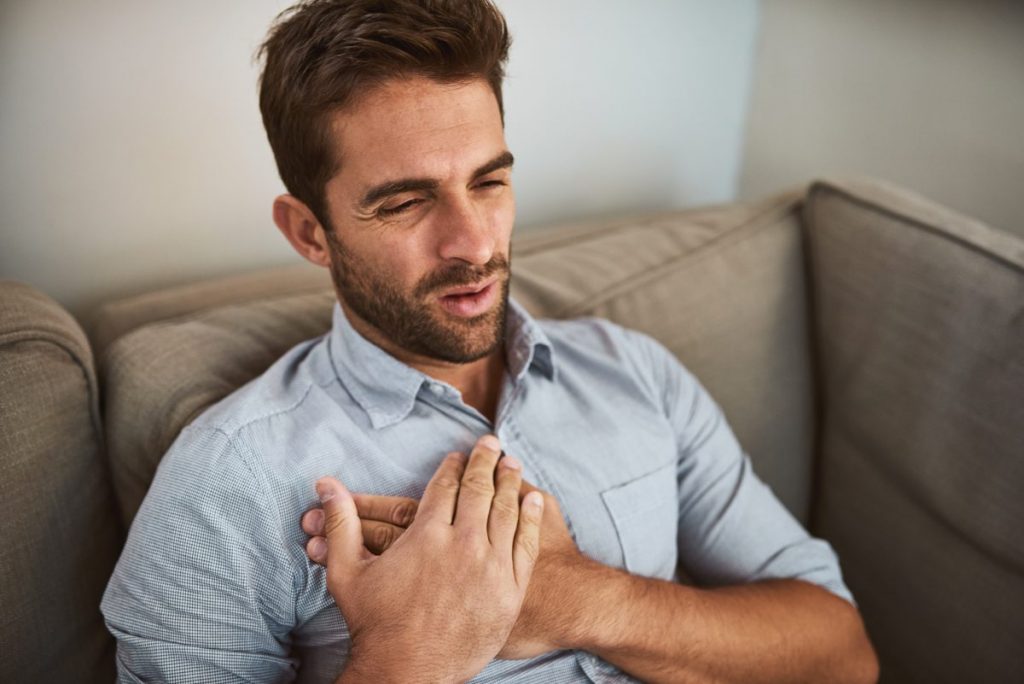 Belching and hiccuping are common bodily actions. While sometimes embarrassing, they are rarely signs of a major issue. However, if belching becomes frequent, excessive, or accompanies bloating or pain, it could point to an underlying condition. Acid reflux, regurgitation, and heartburn may all occur alongside frequent belching if the cause is a severe hiatal hernia. The belches may also result in a stinging sensation in the throat or have a bitter taste. 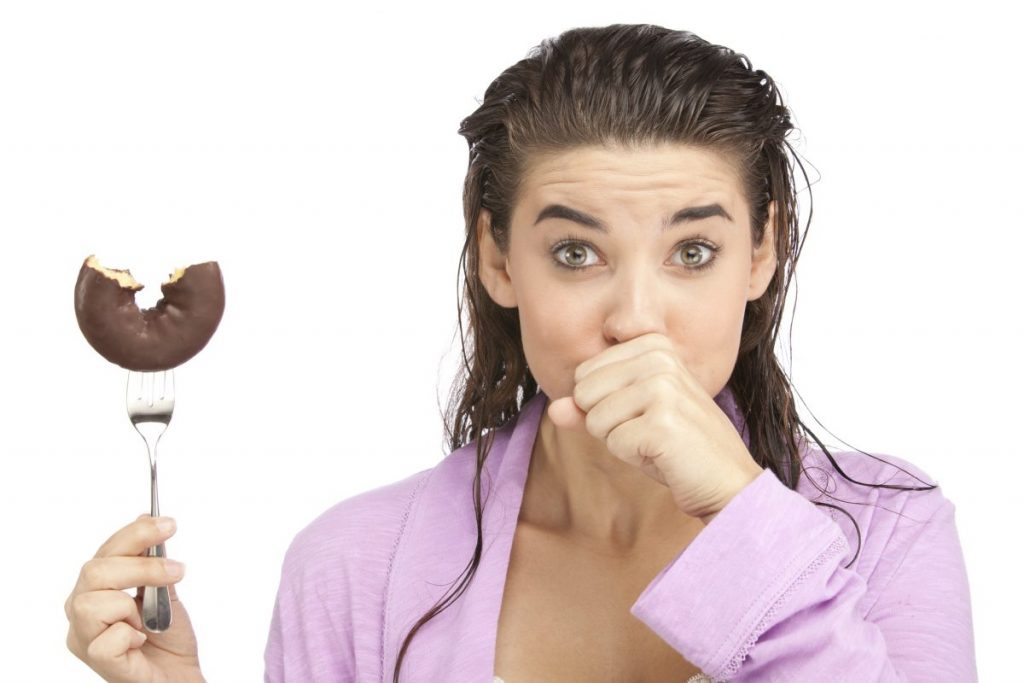 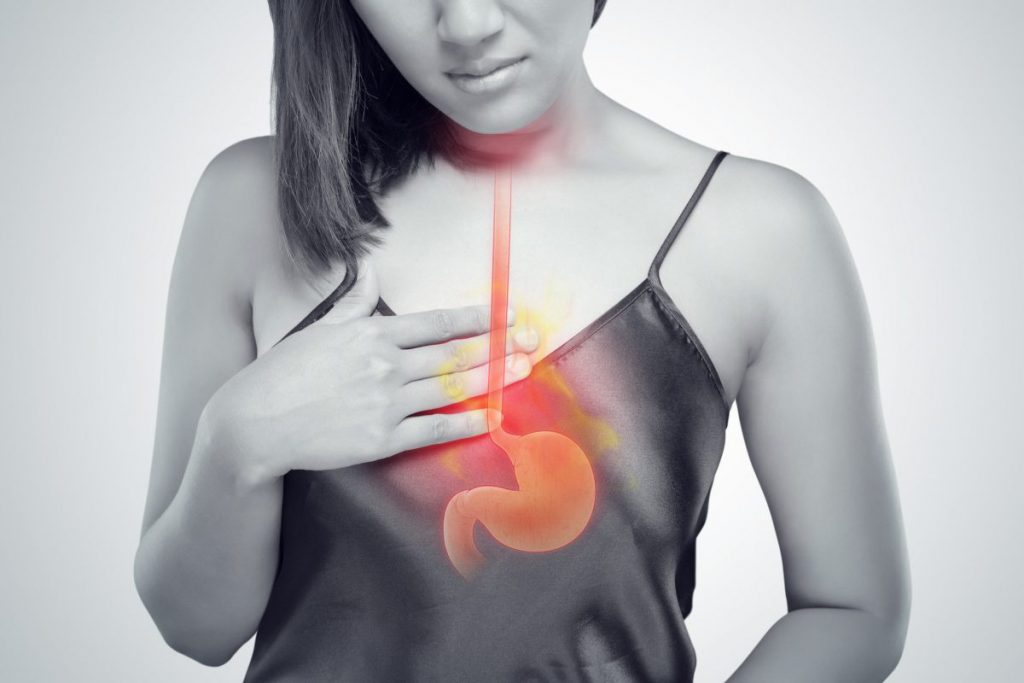 Beyond the normal symptoms of dysphagia, there are several rarer side effects. Severe dysphagia may make swallowing impossible. People experiencing dysphagia may begin drooling as a result of their inability to swallow saliva. Dysphagia can also cause weight loss depending on how long the condition persists. Many people find relief by cutting their food into smaller pieces or changing their diets to avoid hard-to-swallow foods. Dysphagia and weight loss can be a sign of a more serious problem like a narrowing or cancer of the esophagus. These symptoms should always be evaluated by a physician. 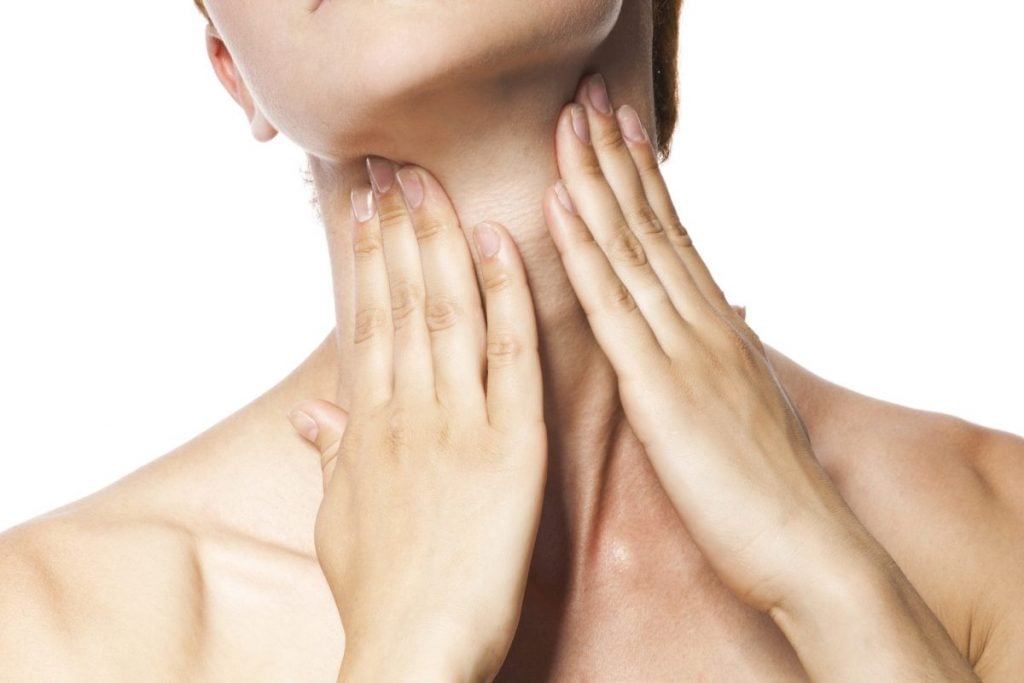 People with hiatal hernias are significantly more likely to develop gastroesophageal reflux disease (GERD). This condition occurs when acid reflux becomes a frequent issue. GERD is generally mild and occurs around twice a week, though severe attacks may occur less frequently. Acid constantly entering the esophagus results in irritation of the lining. This can cause difficulty swallowing, chronic cough, laryngitis, and chest pain. In particular, individuals with asthma may notice their condition worsening. Over time, GERD can damage the lining of the esophagus and lead to a pre-cancerous condition called Barrett's esophagus. This is more common in men.

The second type of severe hiatal hernia is the paraesophageal hernia. It is less common than a sliding hiatal hernia but significantly more dangerous because the esophagus slides up and doesn't move back down. The stomach pushes into the chest cavity, which can cause food to stick in the esophagus. Alternatively, this hernia can twist the esophagus, cutting off the blood supply. Symptoms common to hiatal hernias such as acid reflux and dysphagia still occur, along with significantly worse symptoms such as severe chest pain and distention. If the hernia opens wider, it can become an incarcerated hernia. Surprisingly, some paraesophageal hernias cause no symptoms. 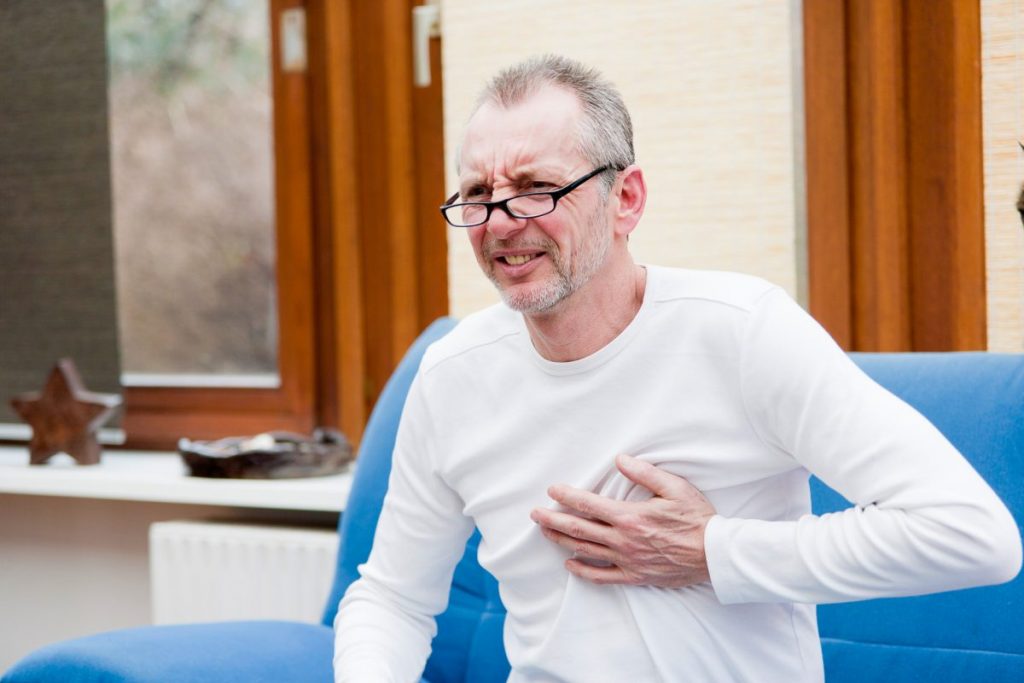 Though a gastroesophageal hernia is dangerous, an incarcerated hernia is a medical emergency that requires immediate treatment. This type possesses all the symptoms of a paraesophageal hiatal hernia and further restricts the flow of blood. Minor side effects include an inability to belch and dysphagia. More severe issues soon follow, such as vomiting that may progress to retching, black stools, and vomiting blood. In extreme incarcerated hernias, a hole may develop in the side of the stomach. This gastric perforation can lead to various issues including severe stomach pain, fever, nausea, and dizziness. 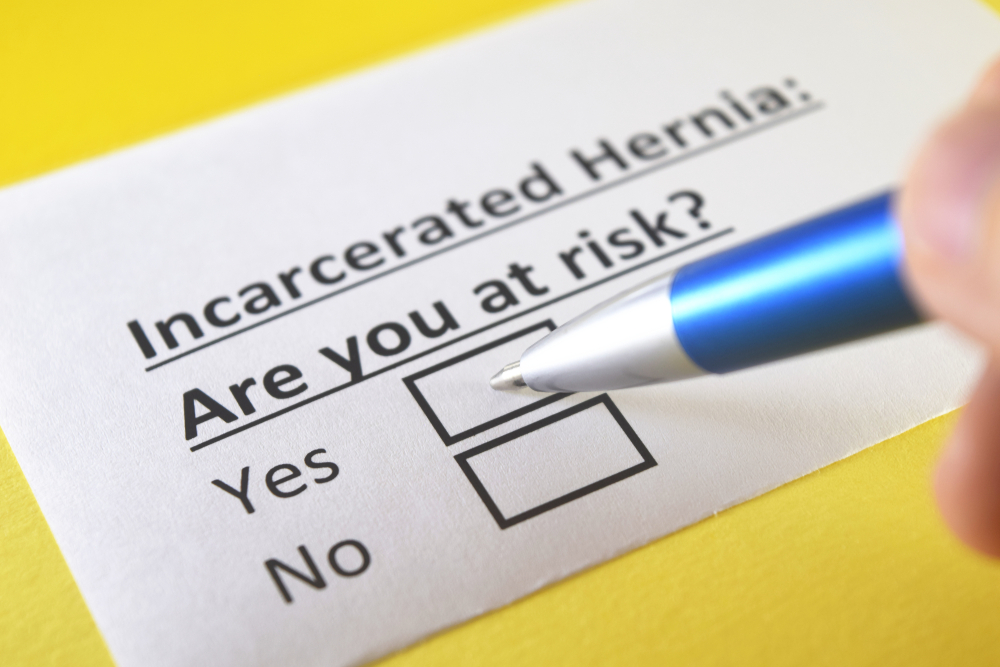