All About von Willebrand Disease

Von Willebrand disease is a relatively common hereditary blood-clotting disorder, affecting as much as 1% of the population. In rare cases, a person can develop an acquired form of the disease as a result of other conditions. Even those with the hereditary version of von Willebrand disease may not develop symptoms for many years. Currently, there is no cure for the condition, but doctors can treat the symptoms.

Most of the symptoms of von Willebrand disease are subtle, and many people with the disease are asymptomatic. The primary and most characteristic symptom is abnormal bleeding. Though severity varies, "abnormal" often refers to excessive bleeding, particularly following a medical procedure. It may also refer to bleeding that persists for longer than average, such as a nosebleed that lasts for more than ten minutes. Blood in the urine or stool is another example of abnormal bleeding. Many people with von Willebrand disease also bruise easily, and their bruises may have a lumpy texture. 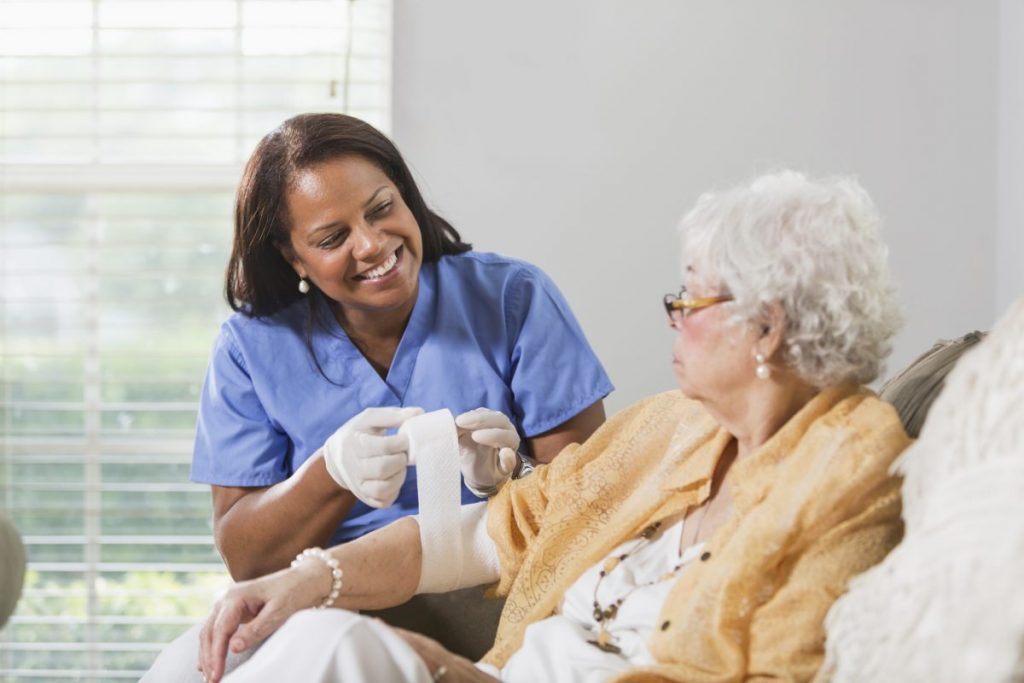 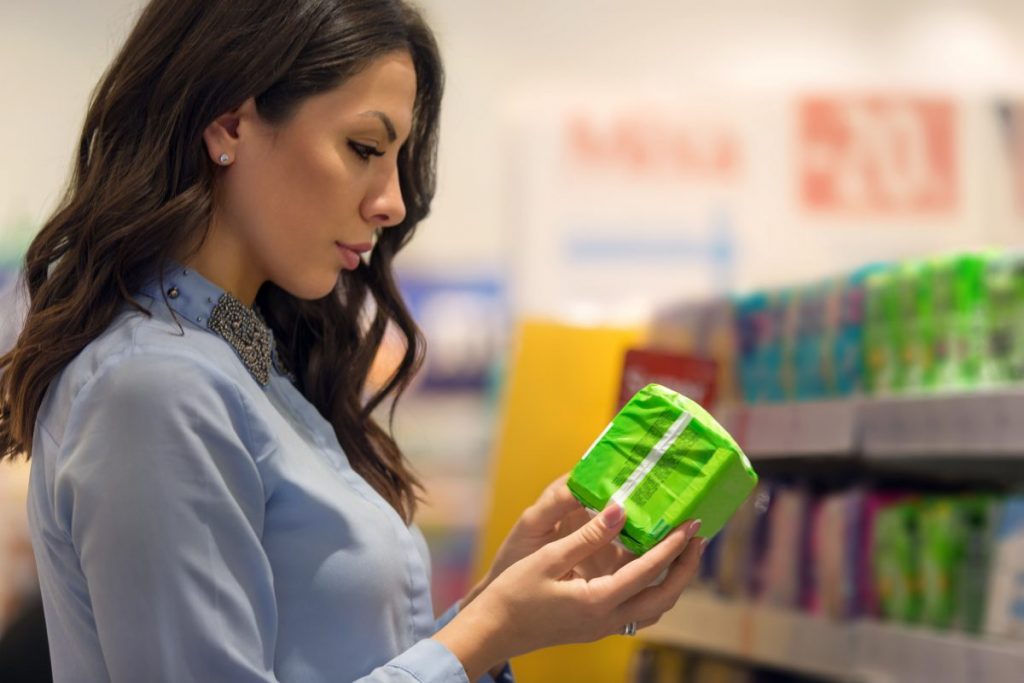 Generally, von Willebrand disease is the result of an abnormality in the gene that controls von Willebrand factor (vWF), an important protein that plays a role in blood clotting. When a person has a deficiency in the quality or quantity of vWF, the platelets in their blood cannot stick together properly and cannot attach to the walls of blood vessels. This prevents the body from forming blood clots or successfully stemming the flow of blood. 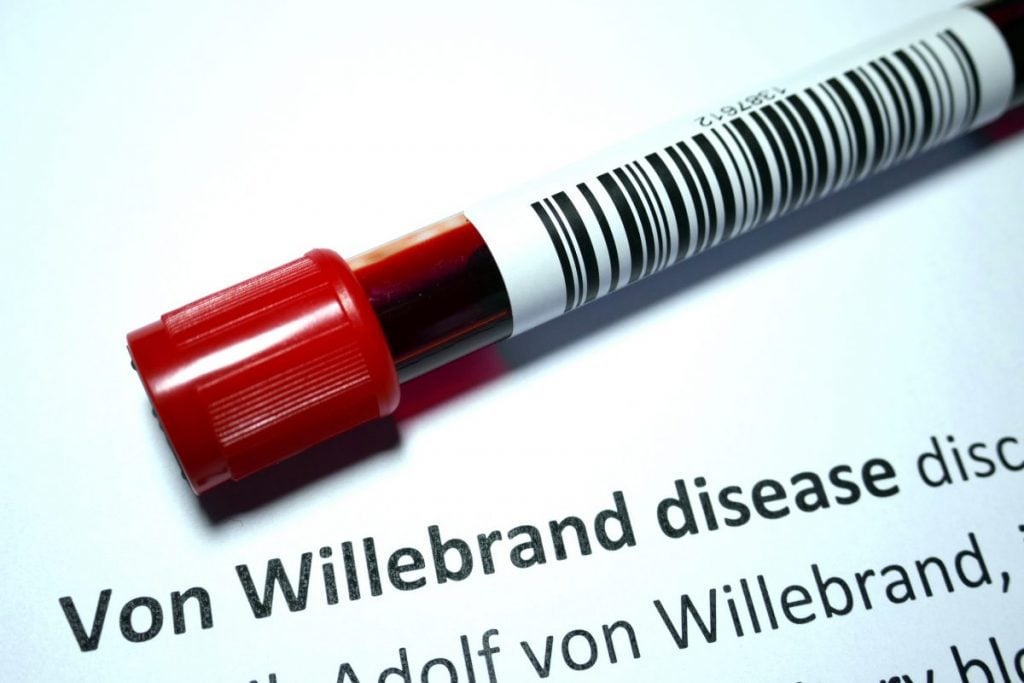 There are three types of inheritable von Willebrand disease and one acquirable form. 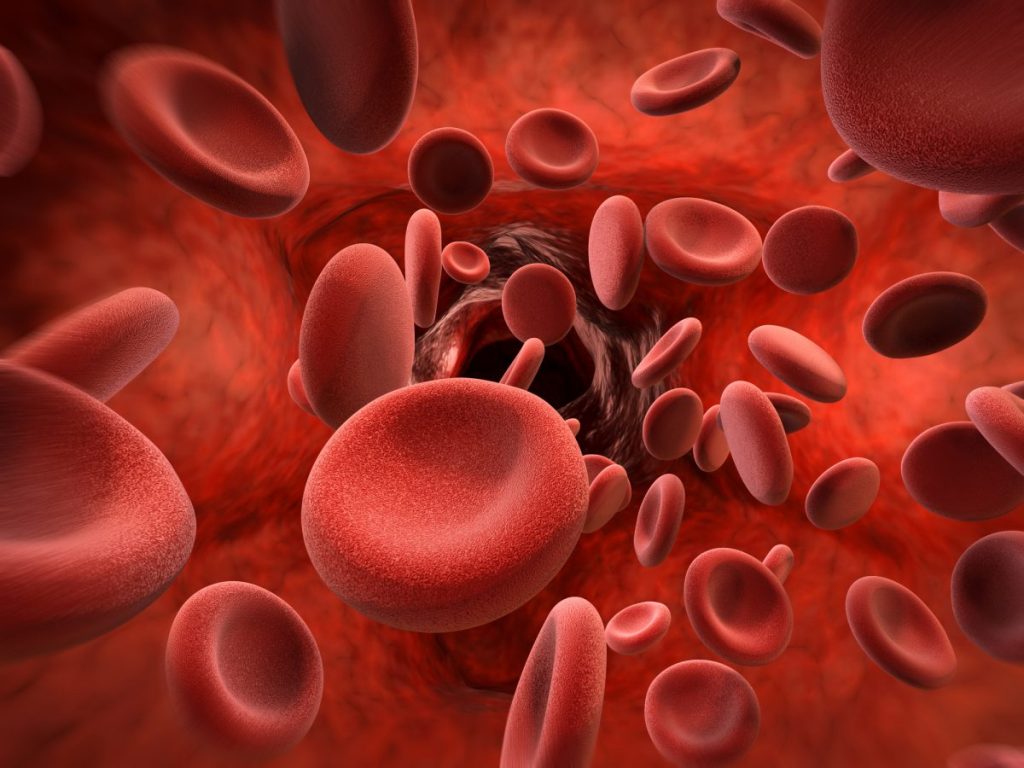 Von Willebrand disease has various inheritance patterns. People usually inherit type 1 and type 2 of the disease in an autosomal dominant pattern. This means only a single copy of an abnormal gene in each cell can cause the disease. Rarely, individuals may inherit type 2 and type 1 in an autosomal recessive pattern. This means both copies of the gene are abnormal. This is typically because both parents have the condition but are asymptomatic or have mild symptoms; often, they do not know they have the condition. Type 3 is also inherited in an autosomal recessive pattern. 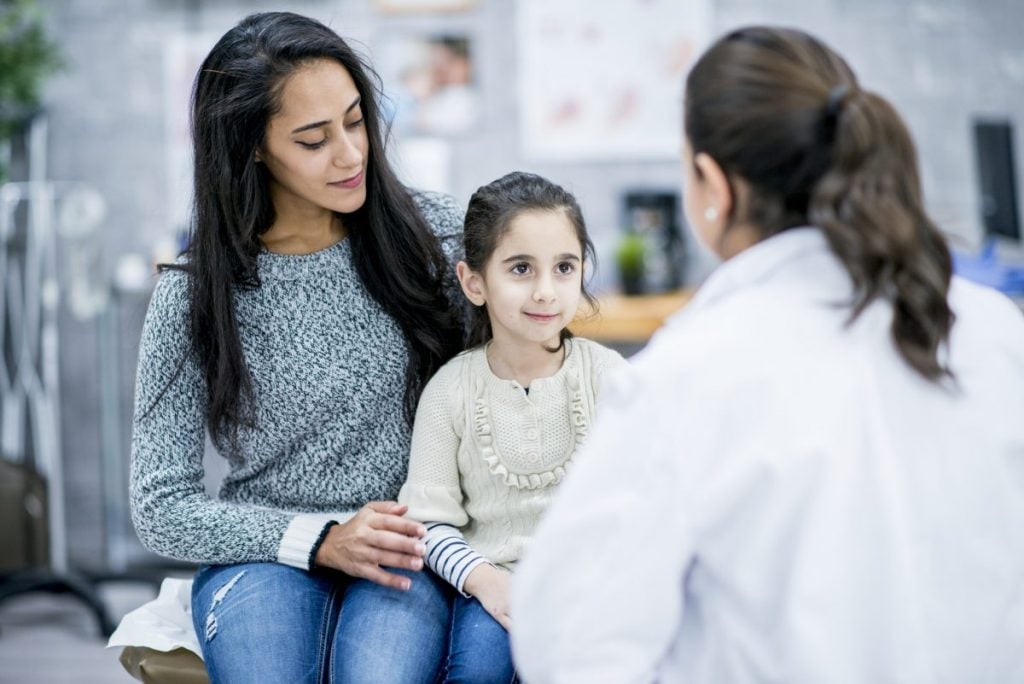 A variety of complications can develop as a result of von Willebrand disease. Some individuals, particularly women during menstruation, can develop iron deficiency anemia if they bleed for an extended length of time. Occasionally, von Willebrand disease can cause swelling and pain if there is abnormal bleeding in the joints. In rare instances, an individual can experience extreme bleeding that requires immediate medical attention. Without medical intervention, the bleeding can lead to serious issues such as heart attacks, strokes, or death.

There is currently no way to prevent inheritance of von Willebrand disease. Individuals who worry about the disease and are planning to have children should consider genetic counseling. This is particularly true for those with a family history of von Willebrand disease. It is possible to carry the abnormal gene responsible for the disease without possessing any of the symptoms. This can result in unexpectedly passing the condition on to one's children. 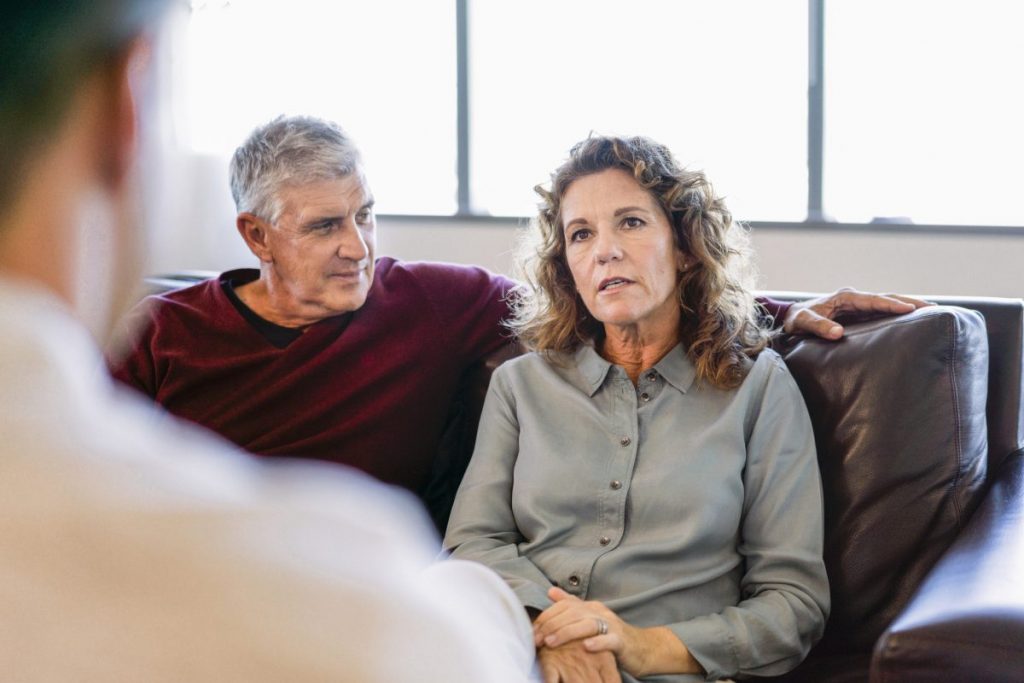 In most cases, early diagnosis of von Willebrand disease can ensure a person can lead a normal and active life. The disease can be difficult for physicians to diagnose. Type 1 and type 2 von Willebrand disease don’t necessarily have obvious symptoms until heavy bleeding occurs after a medical or dental procedure. Doctors will perform a series of blood tests to diagnose the disease. Some look for vWF levels while others check clotting activity. Some general physicians may refer their patients to a hematologist to confirm a diagnosis. 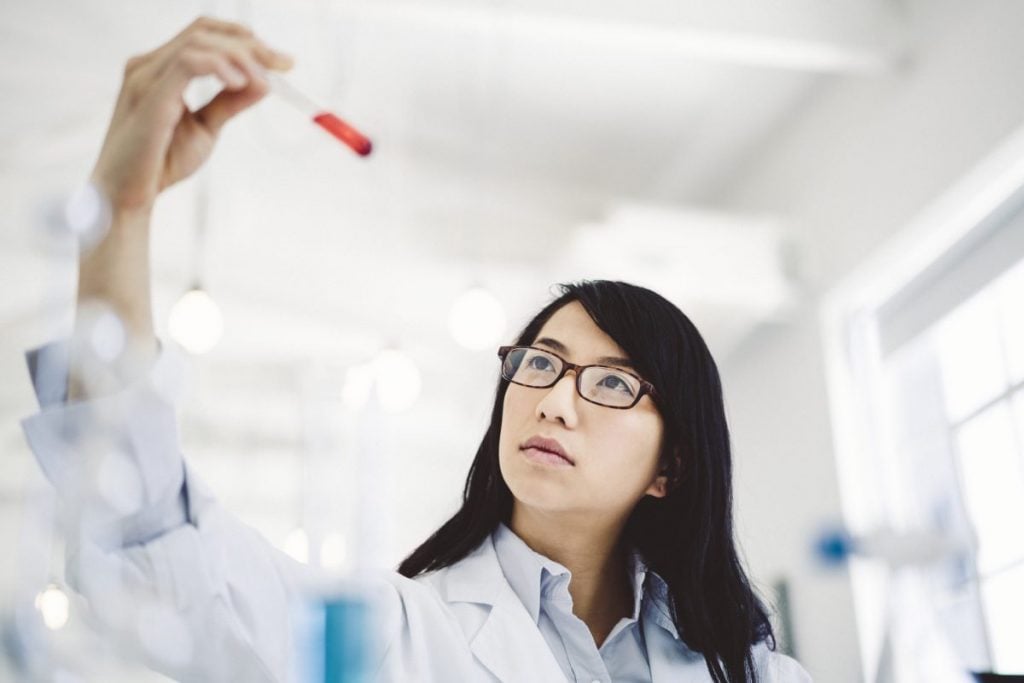 Health care professionals vary their treatments to match the type of von Willebrand disease their patient has and the severity of the bleeding. In general, medications aim to increase the amount of vWF in the bloodstream, replace vWF, and prevent blood clots from breaking down. Medications for women aim to control heavy menstrual bleeding. General medications include a man-made hormone doctors can administer through injection or nasal spray. Some doctors may prescribe birth control pills to increase the amount of vWF in a female patient's body. Rarely, doctors may offer an endometrial ablation for women. The goal of this procedure is to destroy the lining of the uterus and reduce menstrual blood loss.

Living with the Disease

Individuals with von Willebrand disease can take certain precautions to help prevent excess bleeding and remain healthy. It’s important people ensure their doctors and dentists are aware of the disease and ready to handle any possible bleeding during procedures. Individuals should remain active and maintain a healthy weight. In general, people with von Willebrand disease should avoid athletic activities that frequently cause injuries, such as football, hockey, wrestling, or weight lifting. It may be beneficial for individuals with type 3 von Willebrand disease to wear a medical bracelet with their medical information to alert emergency services to the presence of the condition in an emergency. 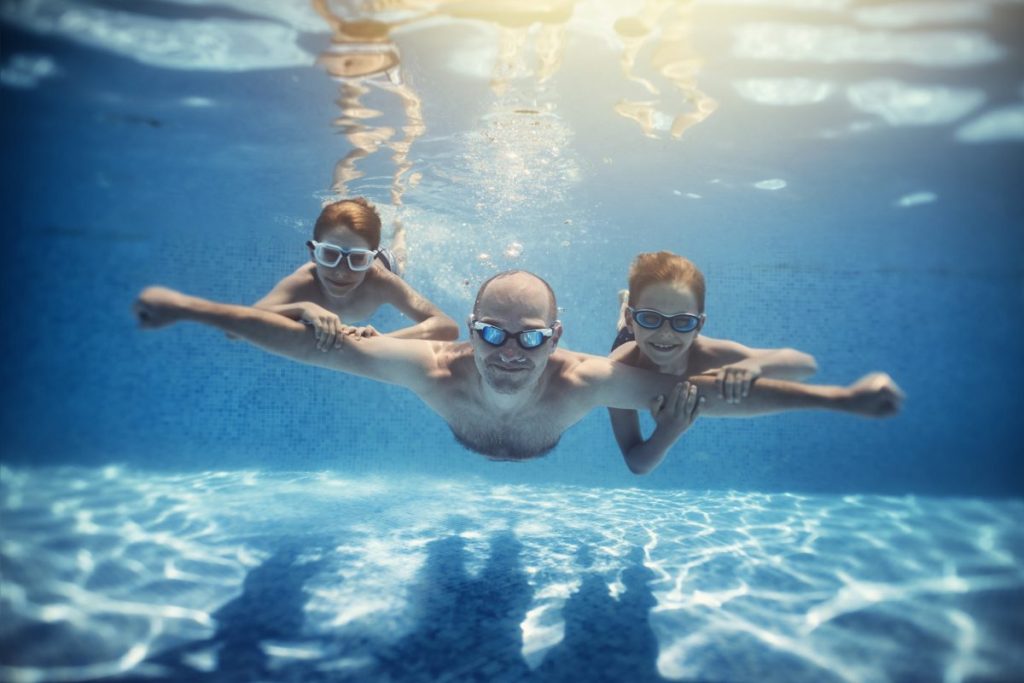