The Scapula and its Muscles

The shoulder blade or scapula is often compared to wings or fins, and for good reason. The flat, triangular bones have the primary purpose of connecting the thorax to the upper arms. Each bone is protected by a network of almost 20 muscles and corresponding ligaments and tendons, which keep necessary joints in place to support myriad upper body activities. For example, the scapula enables baseball players to execute whip-fast pitching and powerful hitting.

Structure of the Scapula 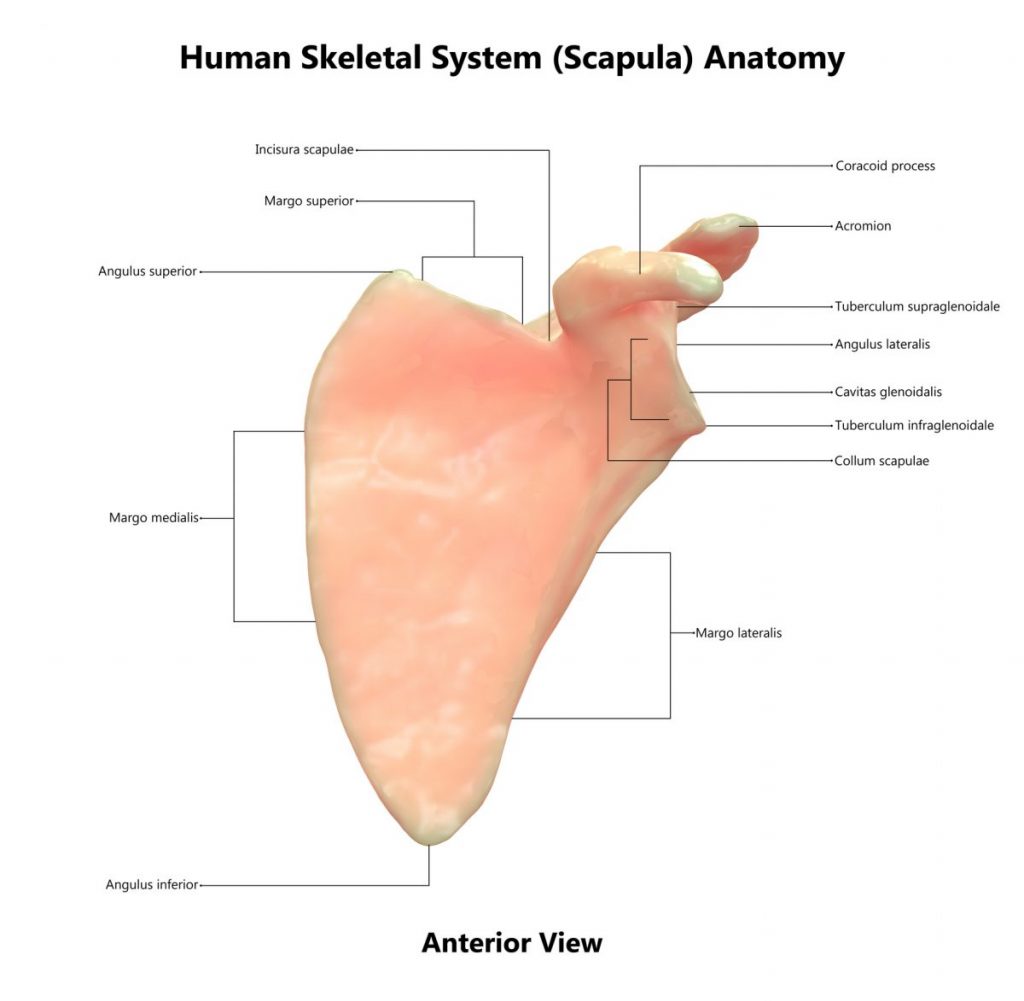 The coracoid process is an outgrowth above the lateral angle of the scapula’s superior border. Its name comes from the Greek word, korax or crow, because some think it resembles a crow’s beak. It is the connection point of several muscles and ligaments related to the humerus and clavicle. Its partner, the acromion process, is an oblong bone protruding above the shoulder joint so that it hangs over the glenoid fossa and the glenohumeral joint. 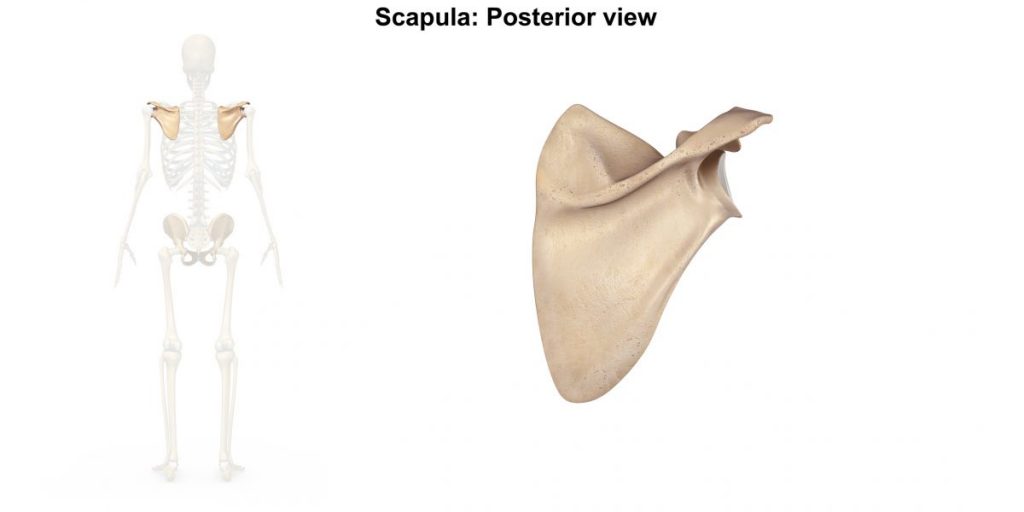 The glenohumeral is a ball-and-socket joint that connects the humerus head to the glenoid fossa, a shallow cavity on the angle of the scapula. Commonly known as the shoulder joint, the glenohumeral joint allows for plenty of mobility, including internal and external rotation and the ability to flex and extend by as much as 180 degrees. Synovial fluid helps reduce friction between the bones. 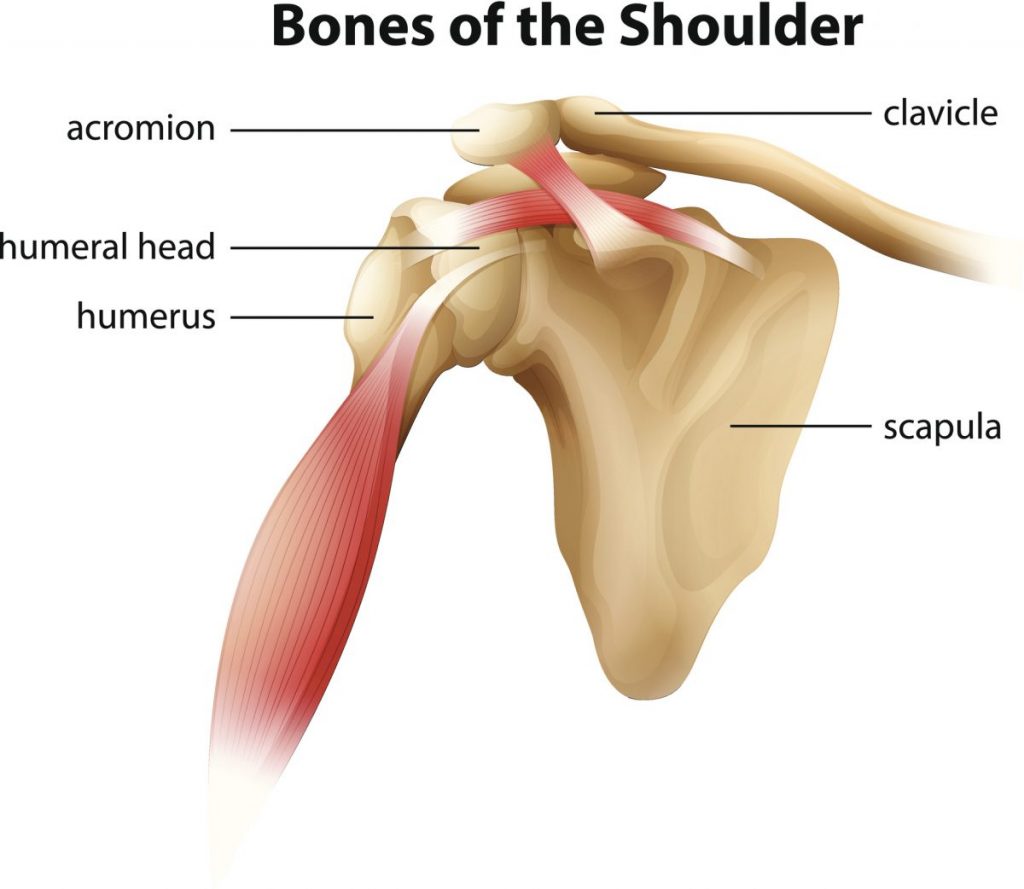 The pectoralis minor is a triangular muscle that originates at the third to fifth ribs. It is connected to the coracoid process and helps with respiration. The pec minor is responsible for helping the scapula achieve a variety of motions, including downward rotation and abduction, due to its partnership with the serratus anterior. The muscle gets its blood supply from the thoracoacromial artery, which branches off into a larger artery in the upper chest. 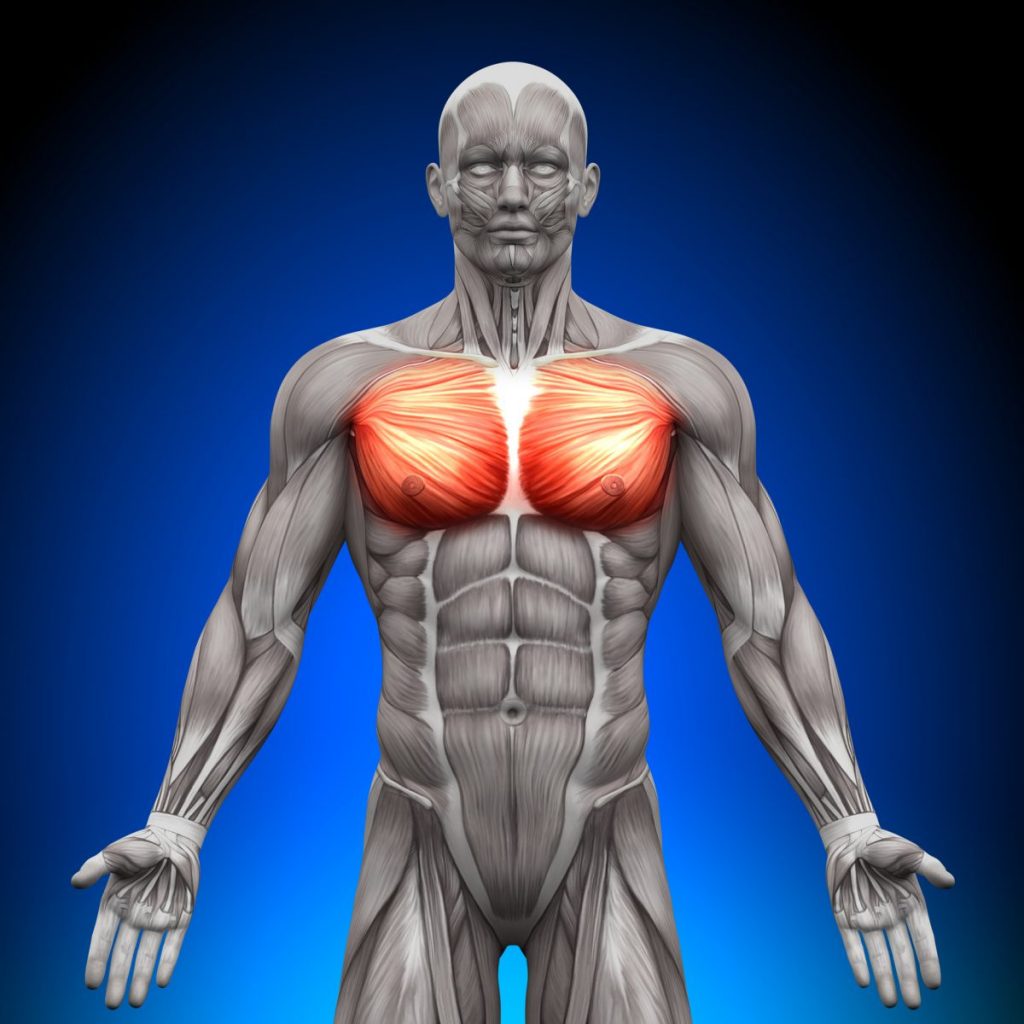 The serratus anterior muscle is fan-shaped and connects from the first to the tenth rib. It is responsible for drawing the scapula forward and up as well as binding it to the thoracic wall. Part of it runs deep under the pectorals, and in muscular individuals, it is usually visible. 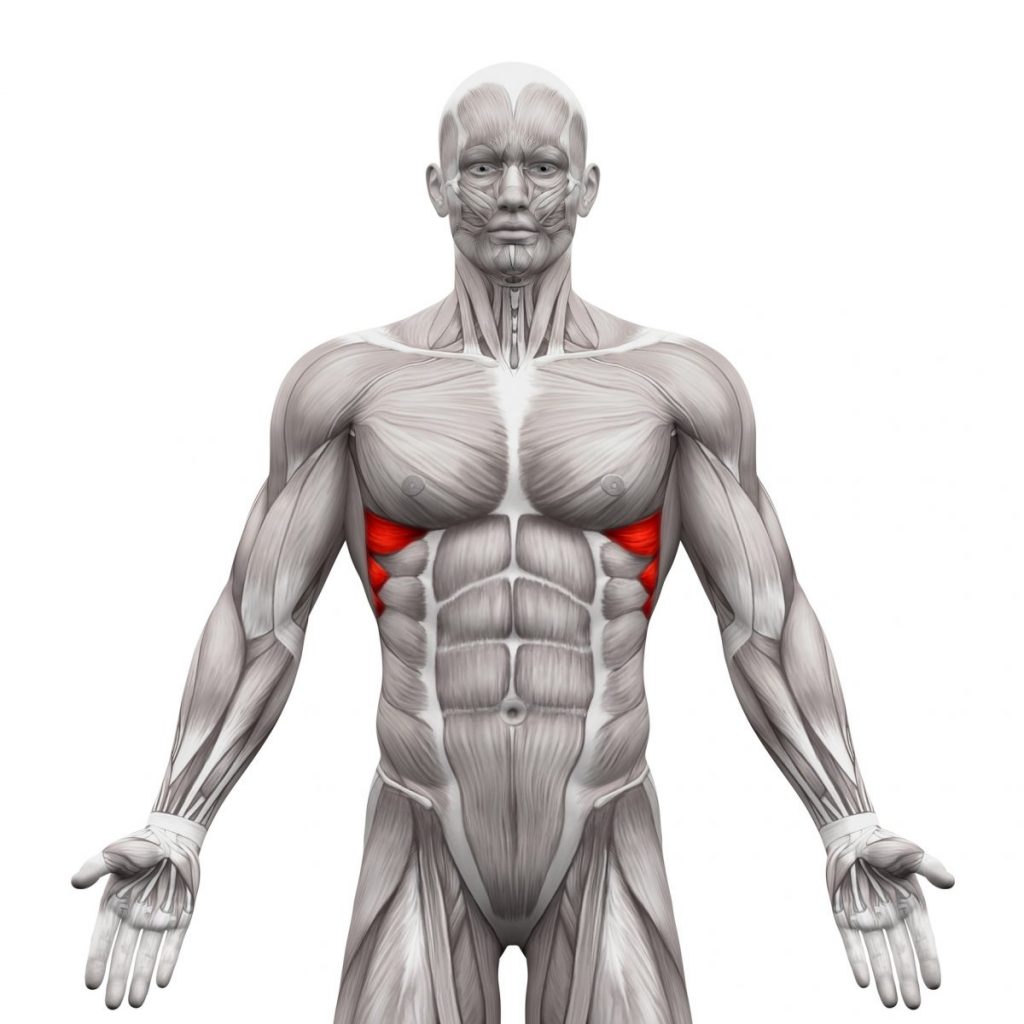 The trapezius gets its name from its similarity to the trapezoid shape -- it is broad and triangular. The long, thin muscle between the neck and shoulder attaches from the C7 to T12 spinous processes. It supports the spine and helps with posture. This muscle also stabilizes and rotates the scapula; the upper section lifts the bone, while the middle and lower sections retract and depress. 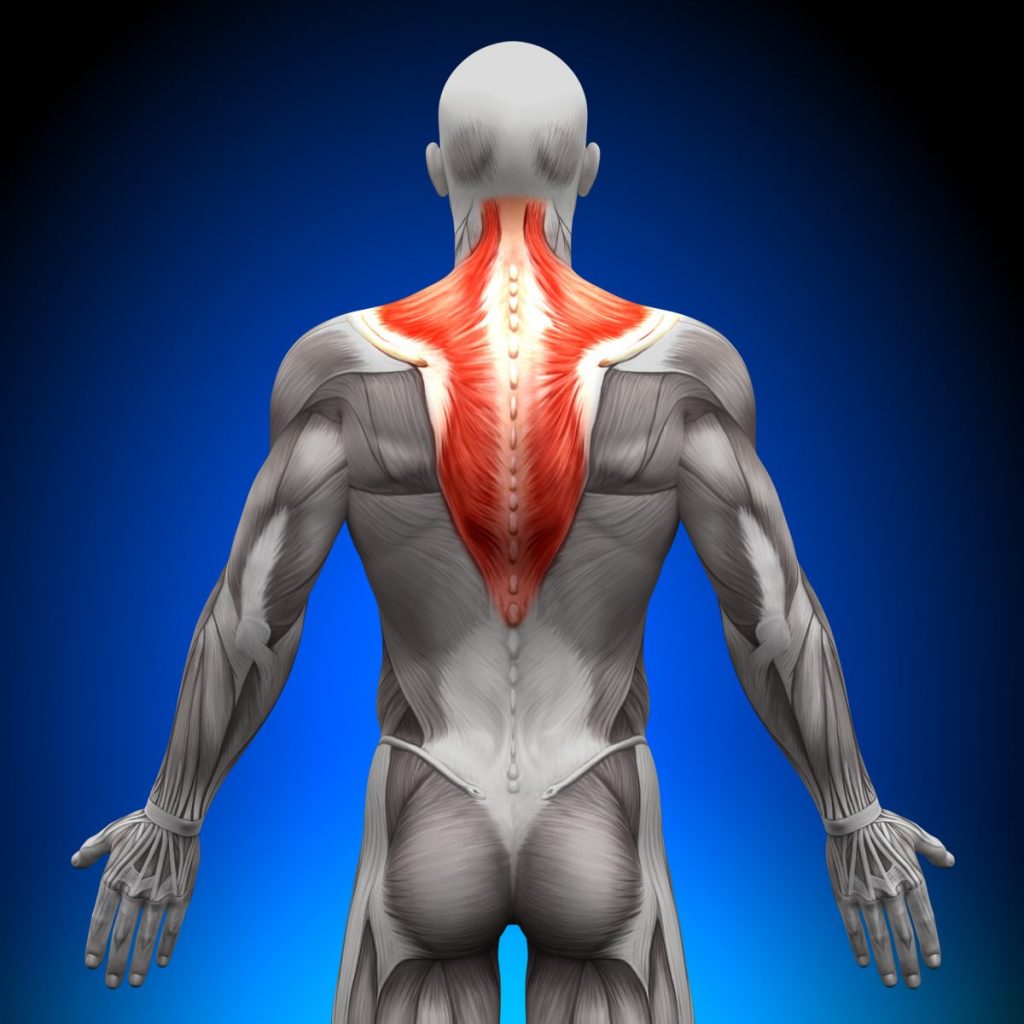 The deltoid covers the rounded corner of the shoulder. It originates from the lateral third of the clavicle and scapula spine, specifically from the acromion process and the spi of the shoulder blade. It moves by pulling the humerus toward the acromion and is responsible for helping the arm extend backward, such as when athletes throw and execute underhand pitches. While the latissimus dorsi has some fibers that come from the scapula, it originates at the T7 vertebrae, which is also the tip of the trapezius muscle, and ends in the sacral region at the base of the spine. It depresses the scapula, particularly when supporting the full body during a pull-up. 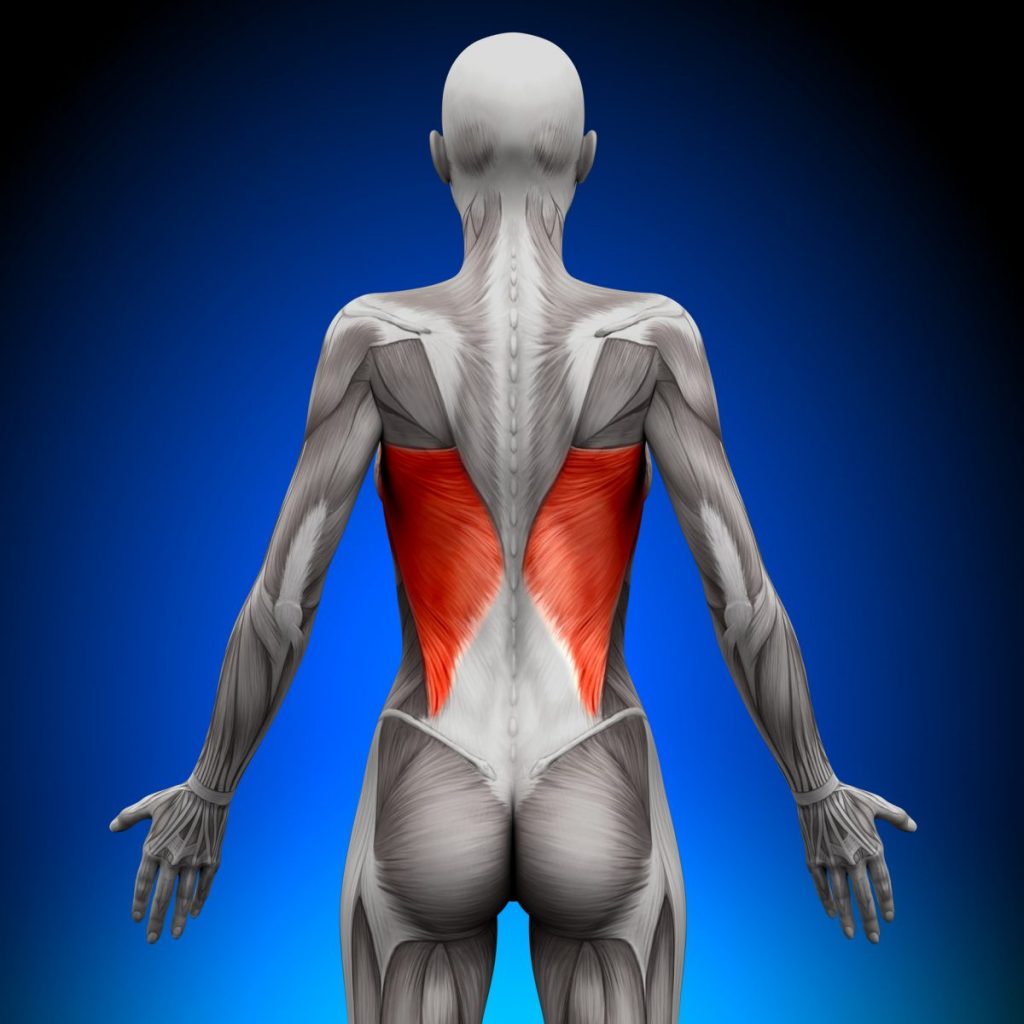 Located in the upper torso of the back, under the trapezius between each shoulder blade and the spine, are the rhomboid muscles. The rhomboid minor is a thick, triangular muscle attached to the cervical and thoracic spinous processes at C7 and T1. The rhomboid major is a wider, thin, flat muscle below the rhomboid minor, which attaches from T2 to T5 vertebrae. With the help of these muscles, one can pull the scapulae together or rotate them downward. 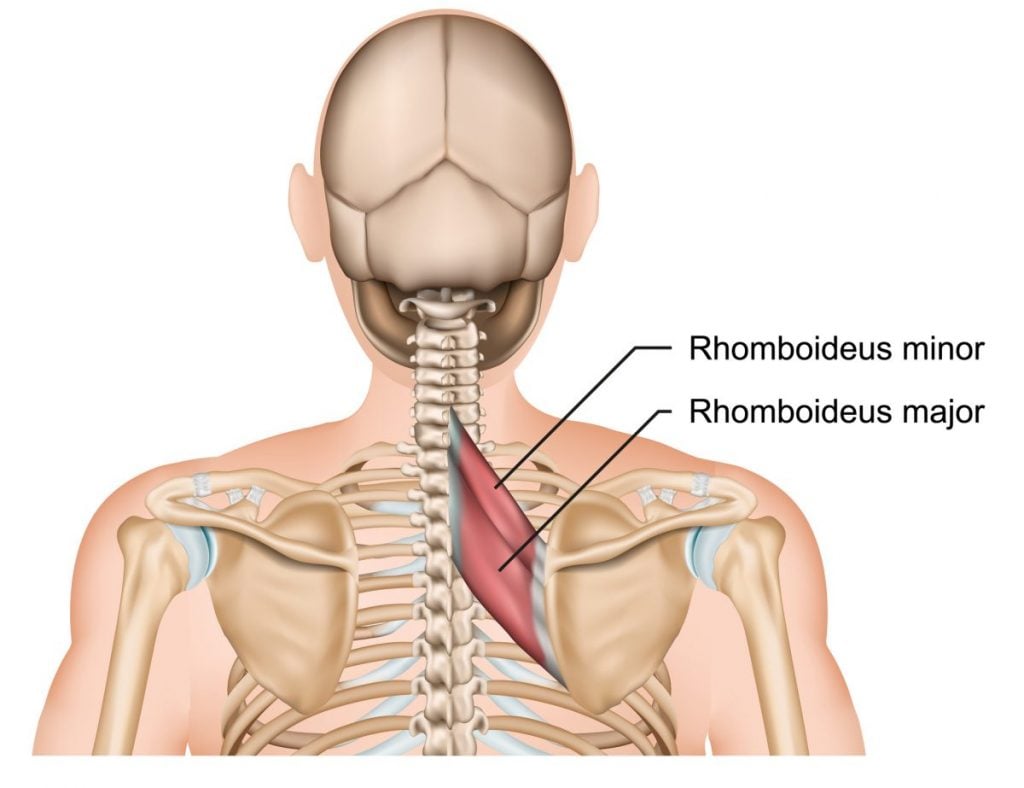 The rotator cuff is a group of four muscles, along with corresponding tendons and ligaments, that hold the humerus to the scapula. This group originates from the scapula and helps stabilize the shoulder. The supraspinatus muscle comes from the upper section of the scapula, and it is responsible for arm abduction -- the ability to raise the arm from the side to a T position. The infraspinatus muscle helps with external rotation of the humerus, while the teres minor muscle prevents the head of the humerus from slipping upward during the reverse movement. The subscapularis muscle prevents displacement of the humerus head.

The levator scapulae is one of the downward rotators of the scapula. It originates from the C1 to C4 spinous processes and attaches to the middle of the upper border of the scapula. The lev scap helps tilt the scapula when the raised hand drops. This muscle has a prominent role in arm elevation and abduction. 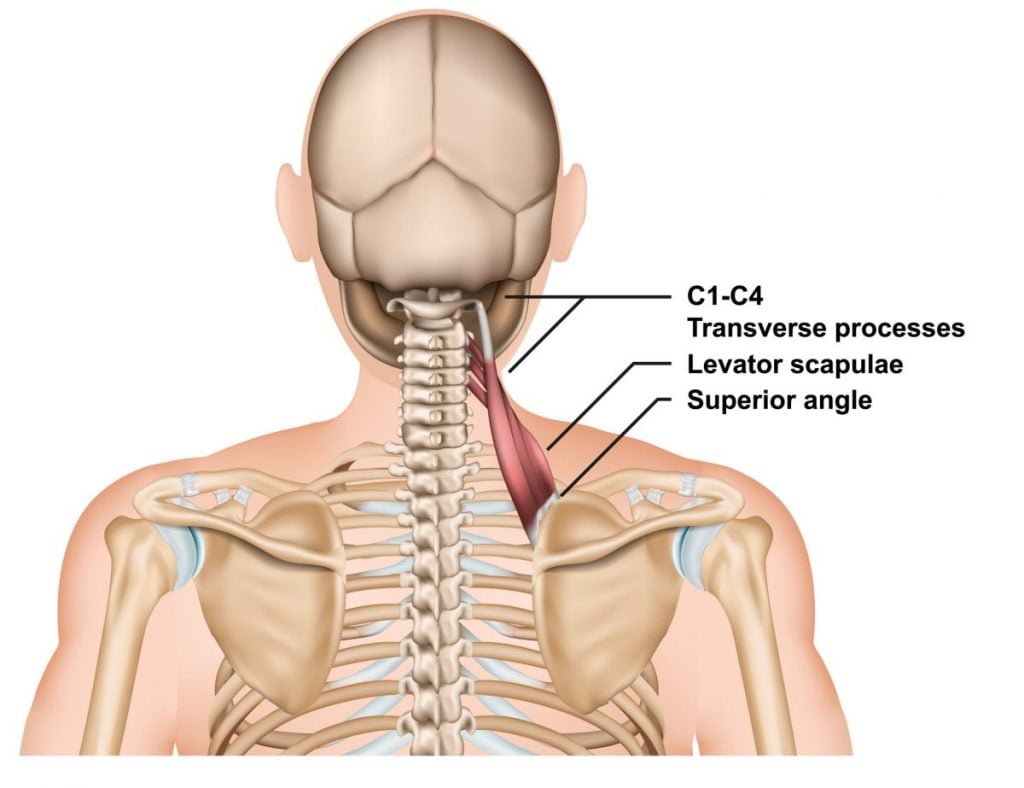