The Bones of the Skull

"To be, or not to be: that is the question" gave the skull its 15 minutes of fame -- and rightfully so. Rife with symbolism, the cranium is fascinating. But there’s plenty more to marvel at when it comes to the noggin. The average human skull features 22 bones. Together, the bones of the skull support the structure of the face and shelter the brain and brain stem. In other words, having a thick skull isn't necessarily a bad thing.

Main Parts of the Skull 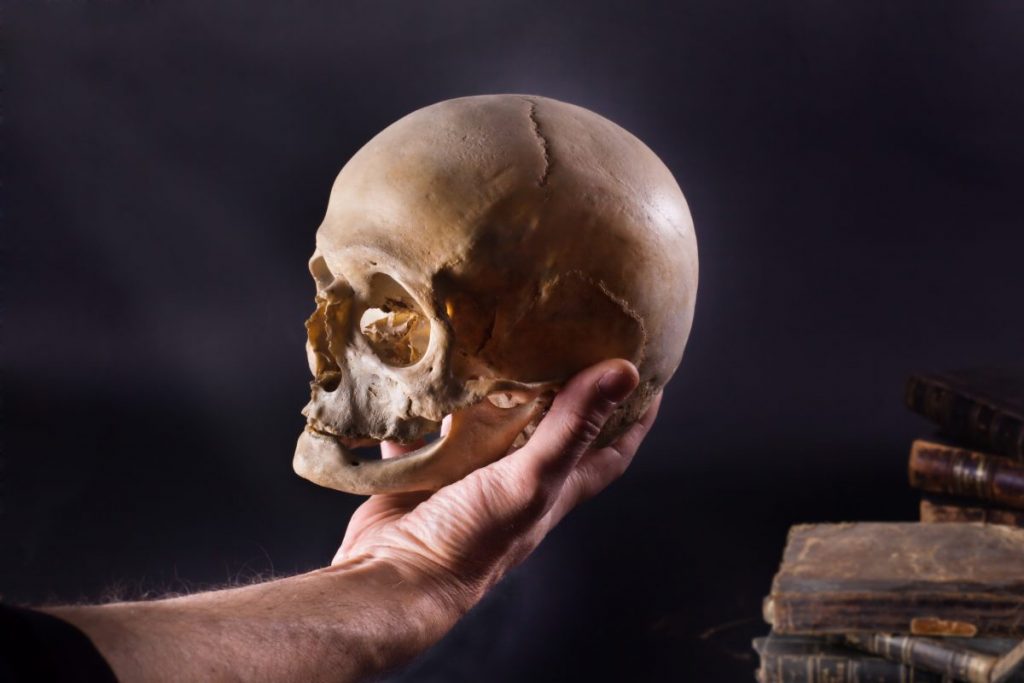 Most of the 14 facial bones come in twos. We have pairs of lacrimal, nasal, palatine, zygomatic, maxilla, and inferior nasal concha bones, laid out symmetrically across the face. Only two facial bones are uncoupled: the vomer, located at the tip of the nose, and the mandible, which straddles the medial line of the face to form the jawbone. The mandible is unique in that it attaches to the skull through the only joint in the skull that’s truly motile. 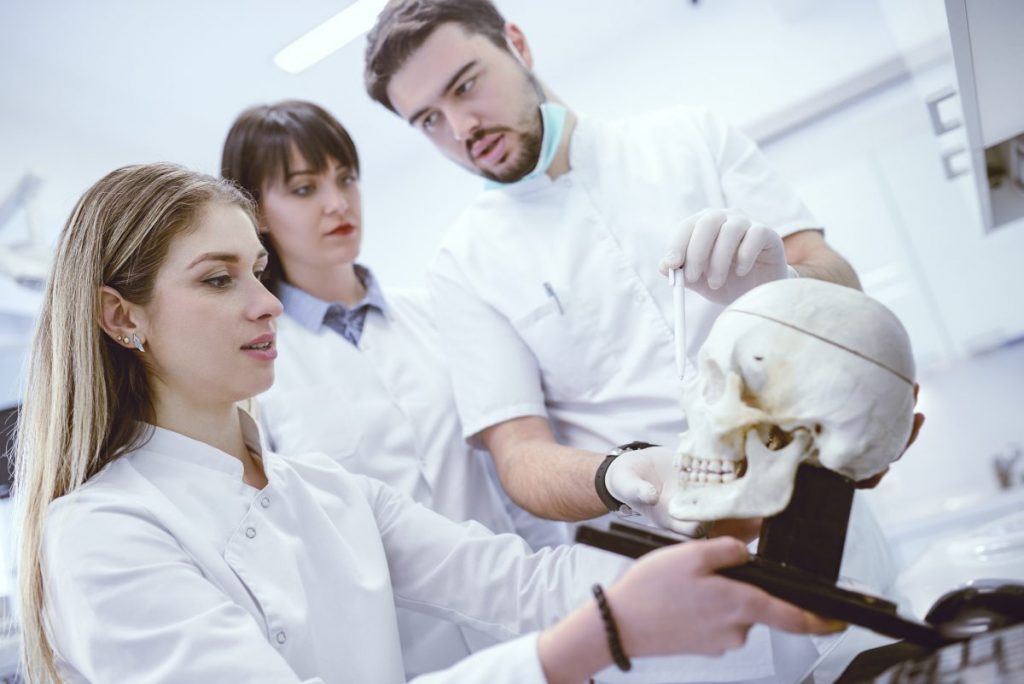 There are eight bones in the neurocranium: two temporal, two parietal, one frontal, one sphenoid, one ethmoid, and finally, a single occipital bone. Unmoveable joints called sutures fuse together these pieces. Classed as flat bones due to their protective nature, they’re very tough on the outside and spongy on the inside – perfect for preventing trauma to the brain. 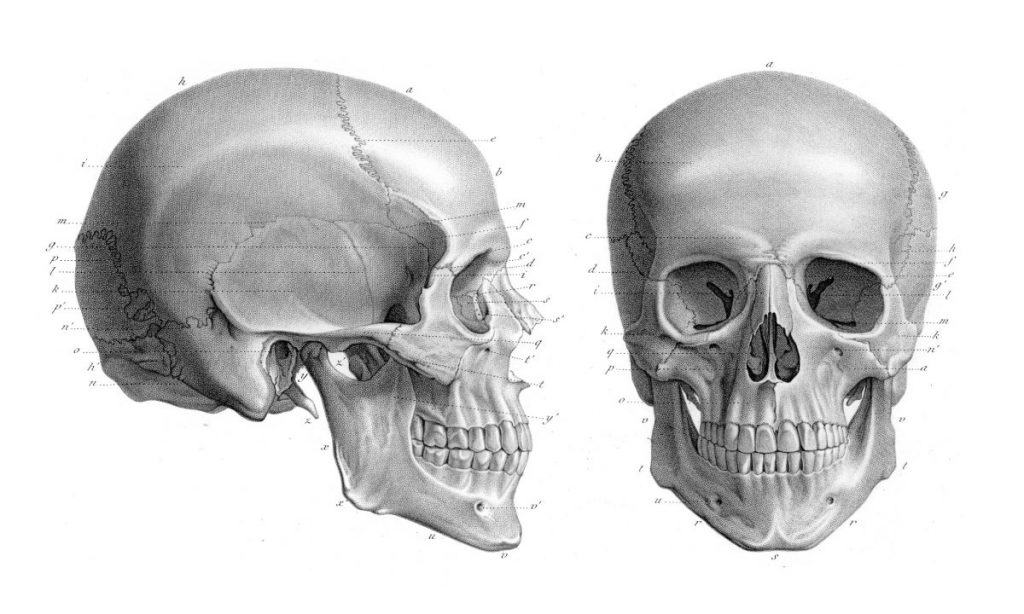 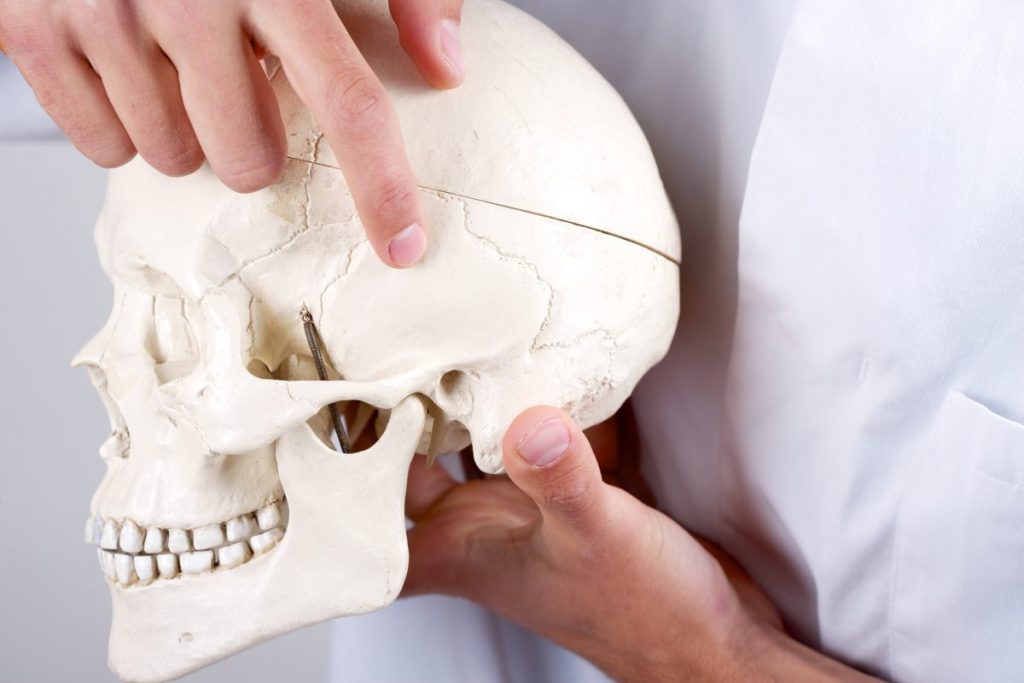 Parietal bones come in twos and make up the rear roof of the skull. The name comes from parietalis, which is Latin for "of the wall." Together with the temporal and other bones, these large, strong bones about 0.5 cm thick provide mechanical protection to the top and sides of the brain. They fuse at the top of the head, forming the sagittal suture through the center of the skull, by the time we turn 30. The dome they create shelters the blood vessels in the meninges. 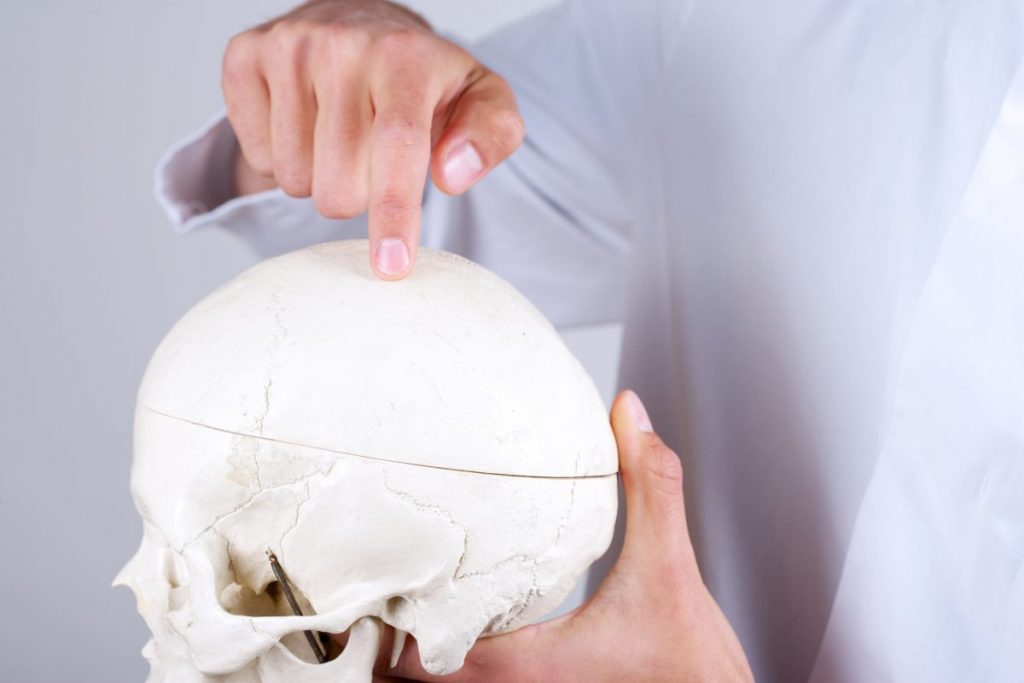 Some people confuse this part of the skull with the eyes. The term "occipital" comes from the word occiput, however, not oculus, and describes the bone that covers the rear side of the brain. Damage to this area of the brain can lead to loss of vision, but that’s the extent of this region's relation to the eyes. In worse-case scenarios, cranial nerve injury and brain injury due to trauma can lead to palsy, coma, and death. 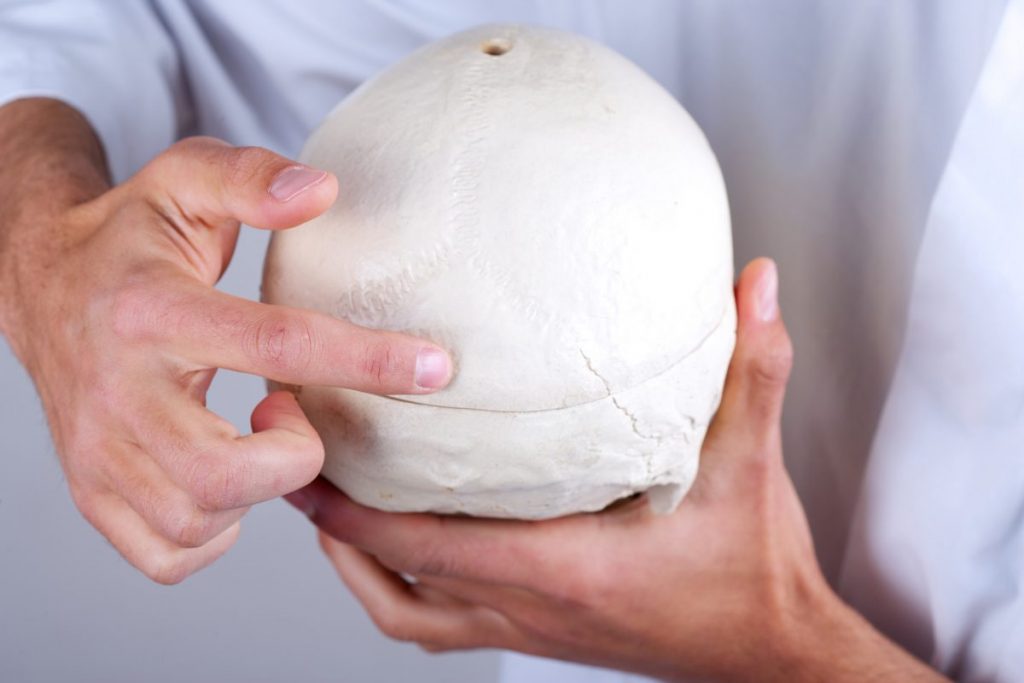 The frontal bone draws its name from the Latin word for the forehead, frons. It forms the front upper part of the skull and is made up of the squamous region -- basically the forehead -- and the orbital region, which runs under the brow ridge and behind the eyes. At birth, the frontal bone is composed of two symmetrical parts that fuse together within days to form a frontal suture which eventually vanishes in most individuals. Impact trauma to the frontal bone can cause facial nerve injury, hair loss, scalp necrosis, and chronic pain, among others. 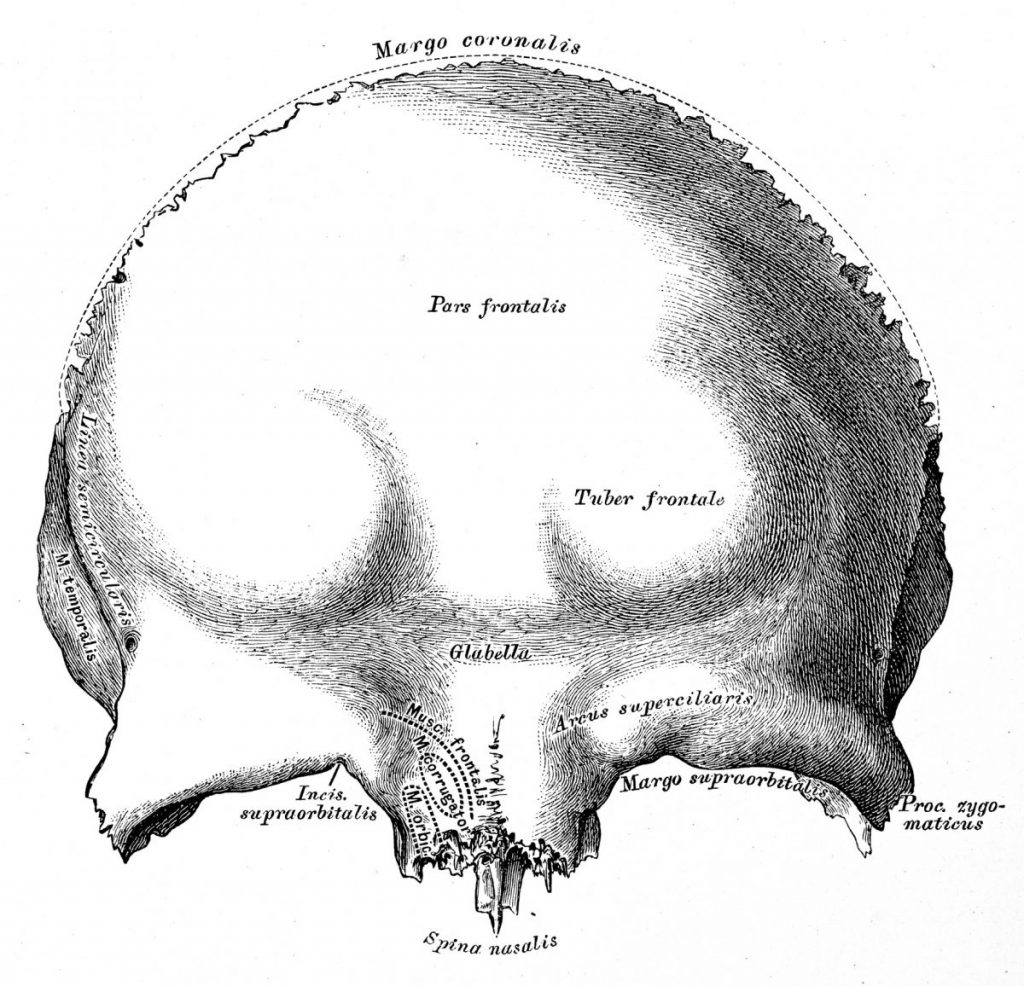 The cheekbone or the malar bone is officially termed the zygomatic bone. This diamond-shaped, paired bone draws its name from the Greek word for yoke -- zygoma. It gives the cheeks their prominence, and it’s a sign of distinction in various cultures. High cheekbones are such sought-after features that some people undergo cosmetic surgery to have them. 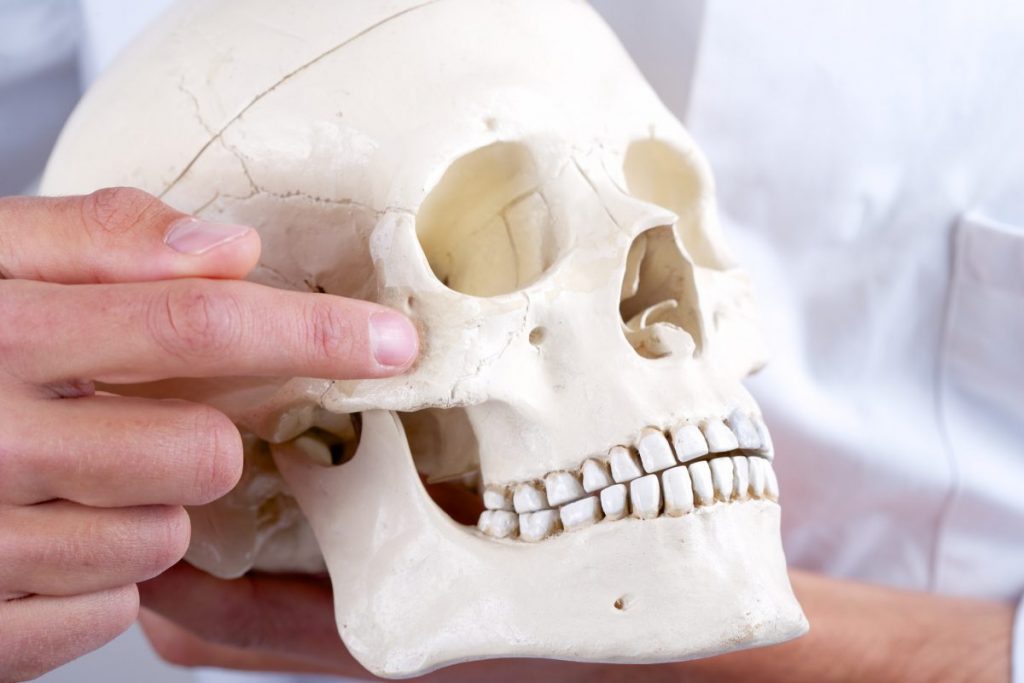 The maxillary bones fuse at the front to form the upper jaw. Together they help form the roof of the mouth, the orbit, and the side walls of the nasal cavity. Within them lie the maxillary sinuses, which drain mucous secretions into the nasal cavity. Part of the maxilla holds the upper teeth -- this is the maxillary arch. Fracturing a maxilla can affect your ability to speak, chew, smell, taste, or eat. Maxilla fractures are common in high-impact collisions such as serious car accidents. 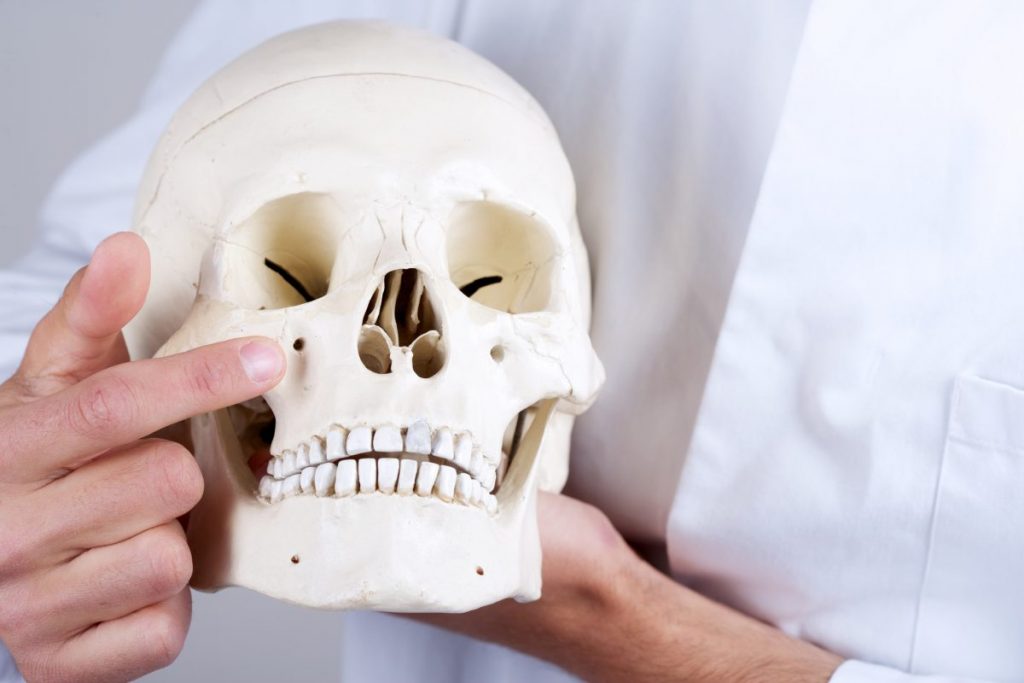 The mandible, jawbone, or lower jaw is the largest and the strongest bone in the human skull. If you exclude tiny bone-like structures in the middle ear, then the jawbone is also the only movable bone in the skull. Mandible fracture is a common type of sports injury, and it can have serious repercussions. Such injuries are easy to diagnose by maxillofacial radiologists with a dental X-ray or more advanced machinery such as a CBCT, and treatment may involve surgery. 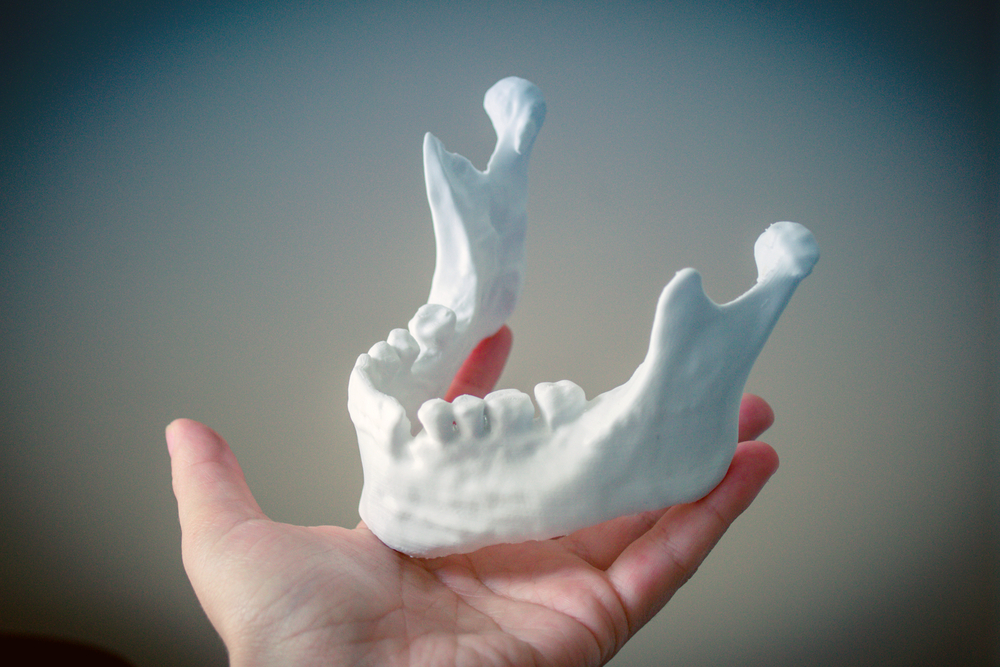