All About the Female Reproductive System

The external organs of a woman’s reproductive system are located in the pelvis. The vulva includes the entire exterior part of the female reproductive system. The mons pubis, a triangular area of fatty tissue found above the vaginal opening, lies on top of the pubic bone. Two pairs of skin flaps cover the vaginal opening. The labia majora, which is also called the outer lips, protects the other external organs. The labia minora is located inside the labia majora and protects the opening to the vagina. A sensory organ -- the clitoris -- lies just inside the top of the labia minora and is covered by the clitoral hood. Located just below the clitoris is the urinary opening. 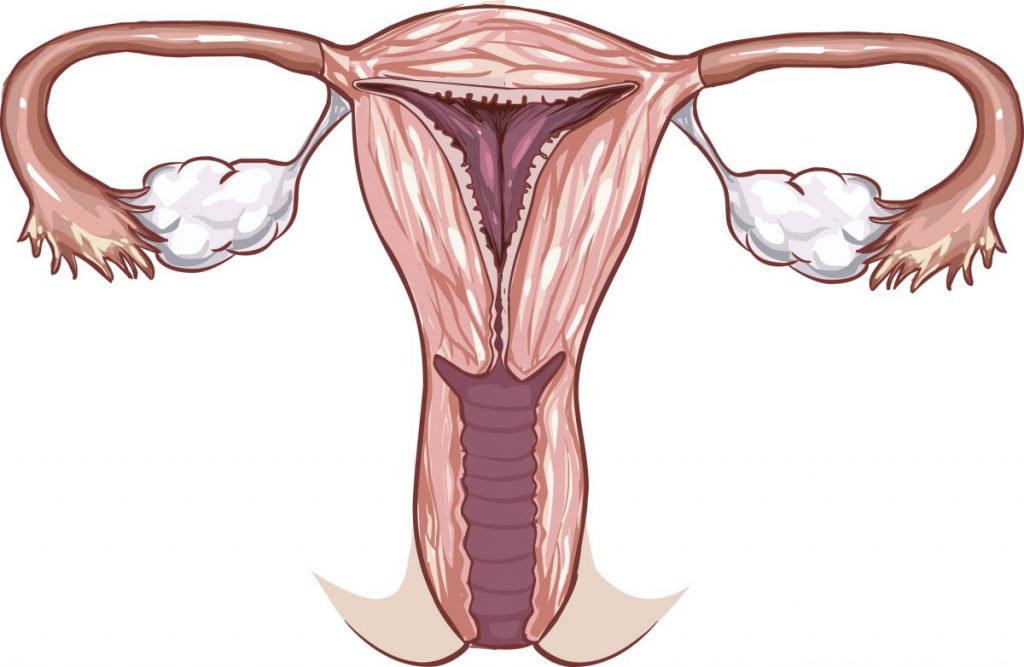 The Bartholin’s glands, found at the vaginal opening, secrete mucus to lubricate the vagina during arousal. The vagina is a muscular tube averaging between three and five inches in length in adult women. Mucous membranes line the walls of the vagina, and not only offer protection but help maintain moisture. The vagina’s ability to contract and expand allows it to accommodate the birth of a child and partake in sexual intercourse. The hymen covers the vaginal opening. The narrow entryway between the vagina and the uterus is called the cervix. Fetuses develop in the pear-shaped uterus, which is connected to the egg-producing ovaries by the fallopian tubes. 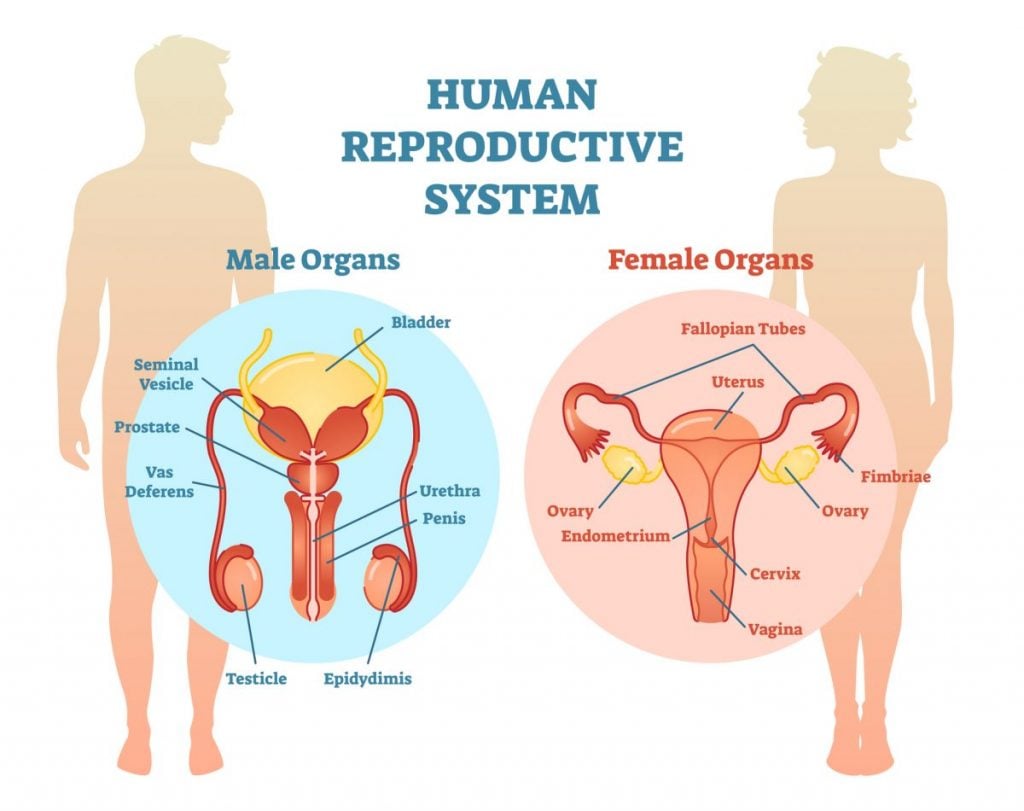 More than 70 genes located on a fetus’ sex chromosomes determine whether a baby will be a male or female. Until the seventh or eighth week of development, both boys and girls have identical genitalia, called the genital ridge. A baby girl’s ovaries start to appear between weeks 11 and 12 of fetal development and produce about seven million eggs. Throughout the female’s life, the number of eggs produced continues to decline, however. At birth, the number will have already dropped to two million. 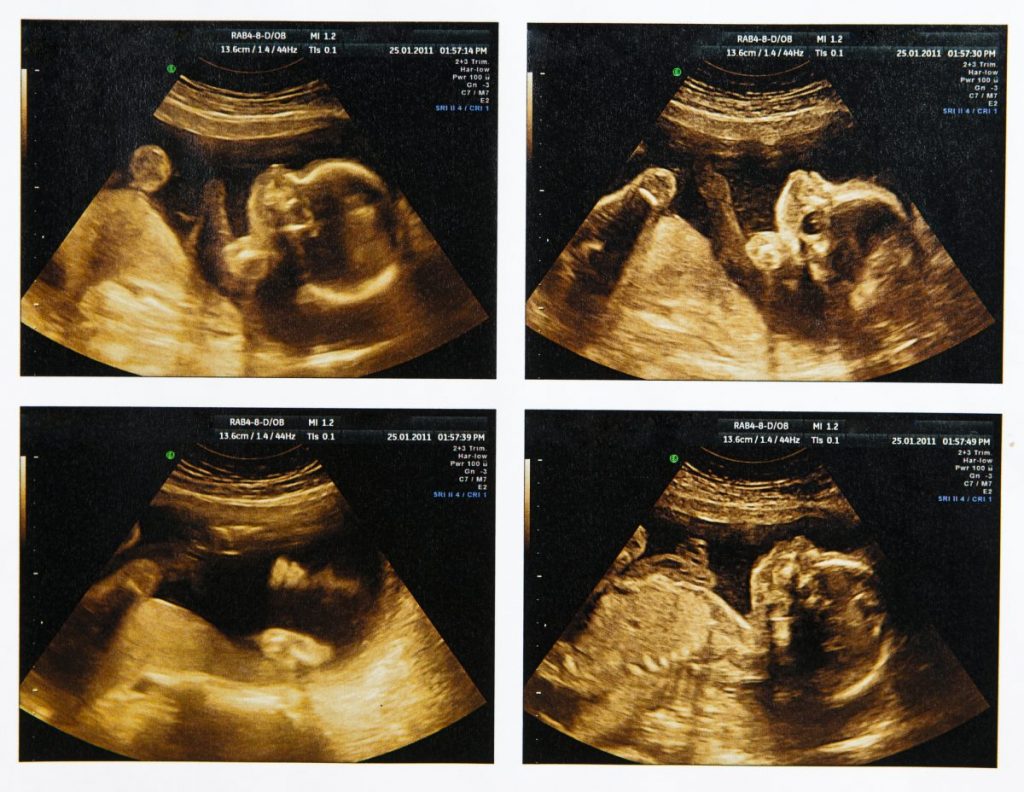 Puberty occurs once a male or female reaches sexual maturation. This usually occurs between the ages of ten and 14 for girls. Sex hormones produced by the pituitary gland alert the body it is time to begin the puberty process. These hormones signal the eggs developed during the fetal stage. Signs of puberty include breast development and pubic and armpit hair growth. Other signs of puberty may include acne outbreaks and growth spurts. As puberty winds down, girls begin to release eggs as part of a monthly menstrual cycle. Once she has reached puberty, it is possible for a female to become pregnant even if she has not had her first period. 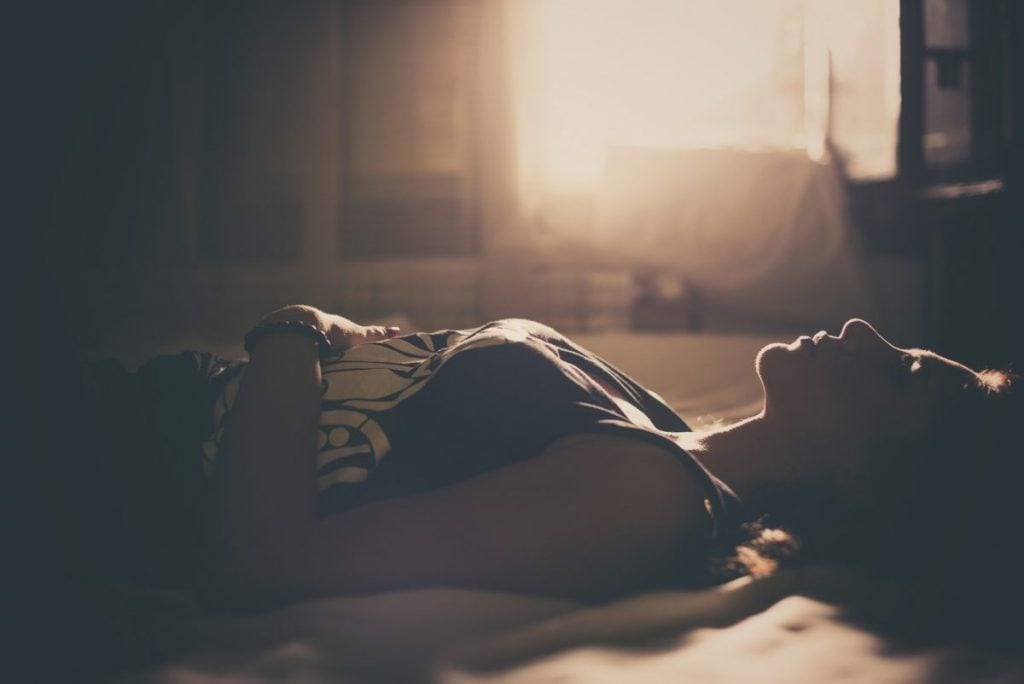 The primary function of the female reproductive system is to reproduce and incubate a developing fetus. Ovulation occurs once each month, sending a single egg through the fallopian tubes -- in some cases, the body may release multiple eggs. During ovulation, the cervical mucus thins, allowing the sperm to pass through more easily. Ejaculation releases the spermatozoa into the vagina during sexual intercourse. 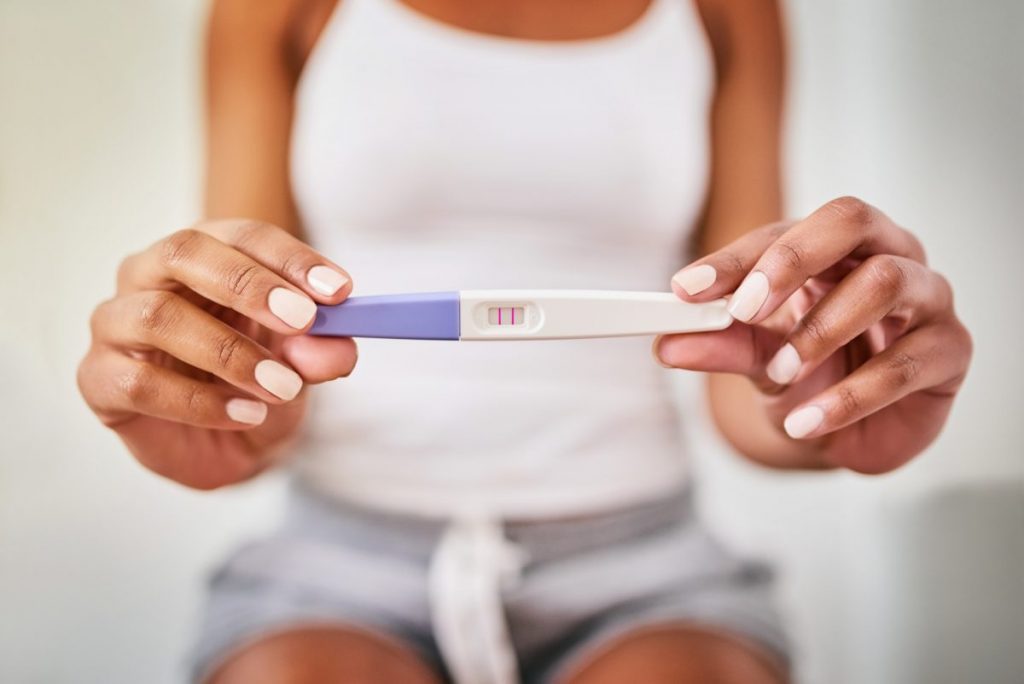 When there is a union of the female egg, or gamete, and male spermatozoa, fertilization occurs. This can occur naturally as a result of sexual intercourse or through the assistance of reproductive technologies. With the aid of special secretions, the spermatozoa swim towards through the cervix and the uterine tube. Fertilization occurs over the next 24 to 72 hours -- a fertilized egg is called a zygote. The zygote moves toward the uterus as the cells begin the next stage, a process of cell division that eventually creates an embryo. 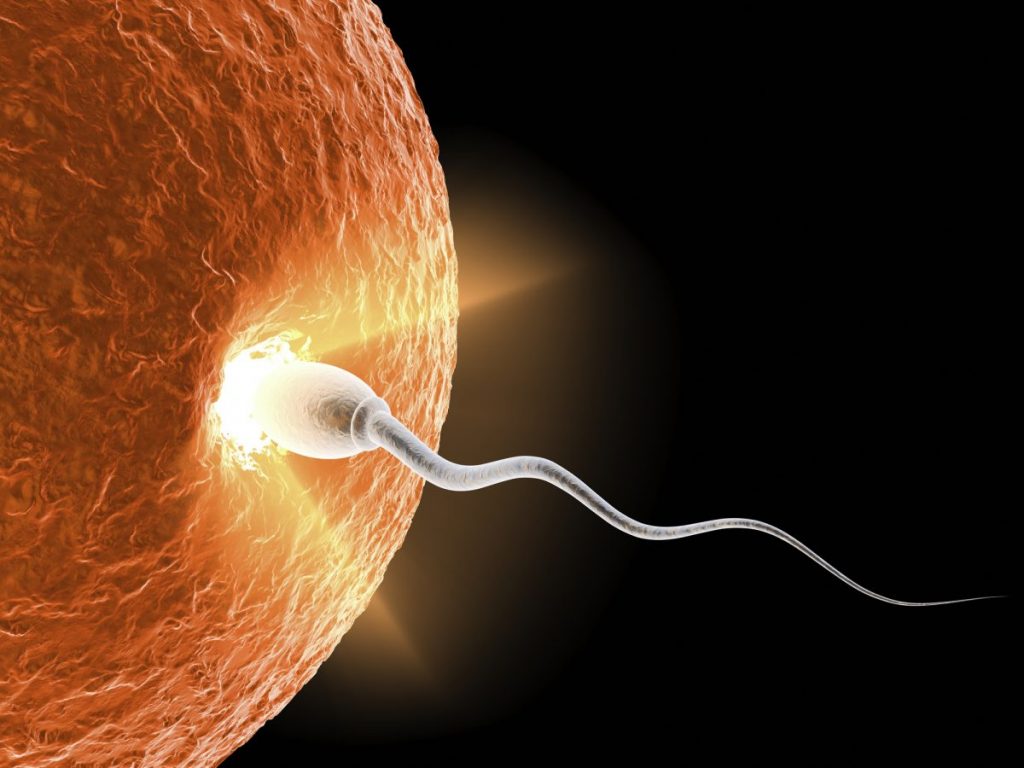 Blastocyst: The Formation of the Embryo

The formation of the embryo starts inside a complex cell called a blastocyst, which consists of two groups of inner and outer cells combined with fluids. This blastocyst is surrounded and protected by a thick membrane called a zona pellucida. The cells that will become the fetal placenta are located just below this membrane and will provide future nourishment for the embryo. The inner cells of the blastocyst become the bones, tissues, and the organs of the fetus. A few days after fertilization, the cells inside the blastocyst begin to develop quickly, producing specialized cells the human body requires. The blastocyst breaks through the zona pellucida and travels through the fallopian tubes to the uterus. 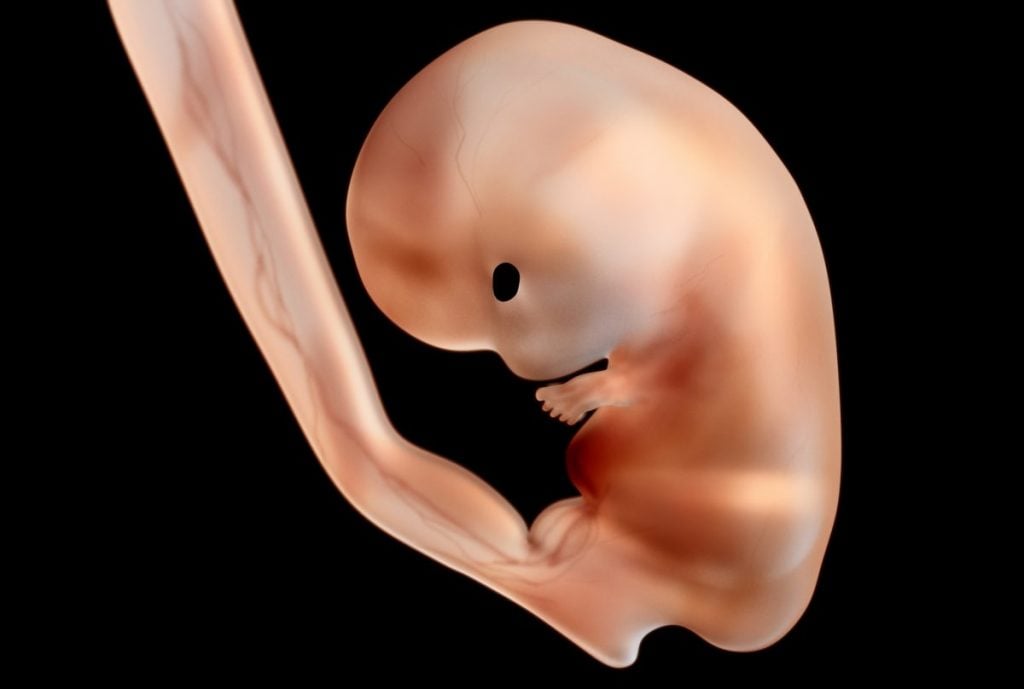 Around the tenth day, the blastocyst implants in the endometrium, the mucous membrane that makes up the uterine wall. The mucous cells of the blastocyst combine with the uterine lining to create the placenta. Once the implantation reaches the final steps, the blastocyst becomes an embryo, usually around five weeks after implantation. During this time, the brain and spinal cord, the digestive system, and the limbs develop. The uterus stretches to accommodate the baby’s growth and provides nourishment. After approximately 9 months, the baby is born, exiting through the birth canal. 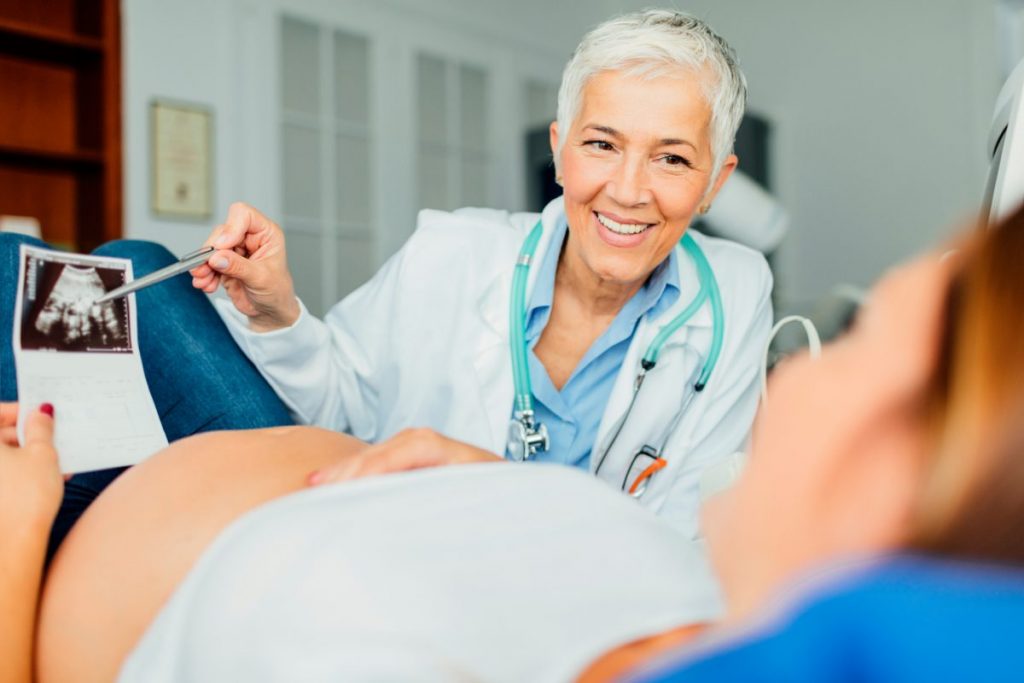 If the egg is released during ovulation or the embryo fails to implant into the uterine wall, it is expelled along with the uterine lining, which consists of blood and tissues from the inner lining of the uterus. The monthly menstrual flow -- commonly referred to as the period -- occurs approximately every 28 days. Before the discharge begins, the female individual often experiences the physical discomforts of premenstrual syndrome (PMS), which include cramps, sore breasts, headaches, bloating, backaches, and fatigue. Other symptoms brought on by menstruation are emotional, such as depression and irritability. One period generally lasts about seven days on average. 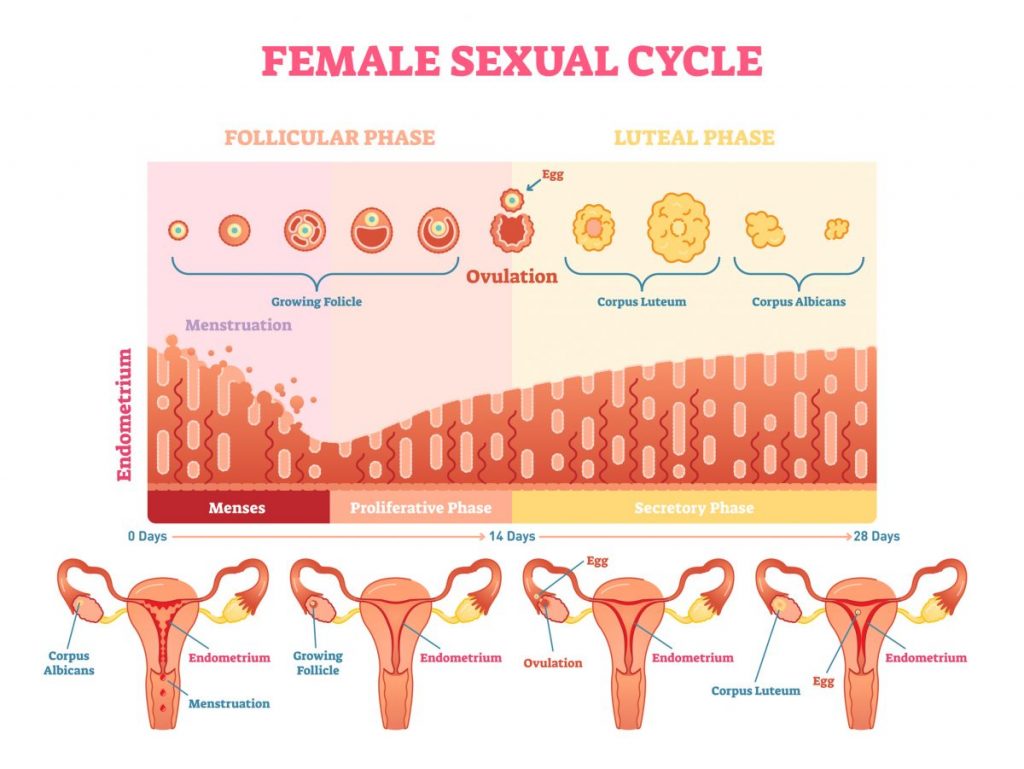 Fertility decreases slowly over time, but at a much more rapid rate between the ages of 35 to 37. Once women reach this age, their ovaries produce fewer hormones that control menstruation, estrogen, and progesterone. Menopause usually does not occur until a woman is in her 40s or 50s -- the average age for menopause onset in the U.S. is 51. A woman may experience symptoms of menopause for years before it occurs. The symptoms include vaginal dryness, night sweats, slowed metabolism, sleep disturbances, and irregular periods. Once a woman who is in the menopausal age range has gone for 12 consecutive months without a period, the physician will officially diagnose menopause. 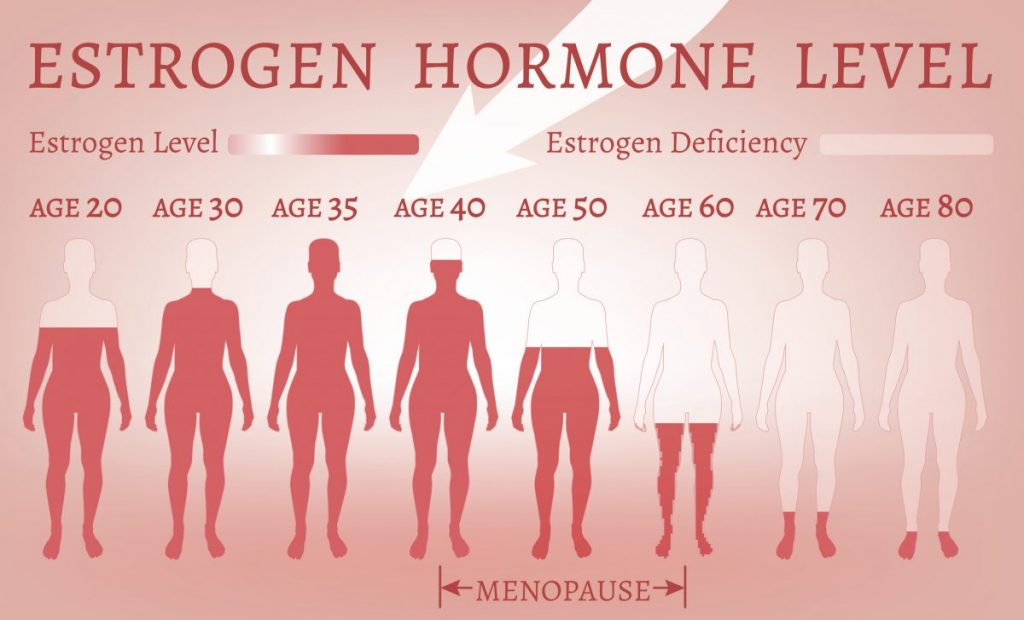