All About the Arm Muscles

The arm muscles are responsible for many movements, from complex precision tasks such as painting, to tasks requiring great strength, such as lifting. The muscles attach to the bones of the arms: the humerus in the upper arm and the ulna and radius in the forearm. 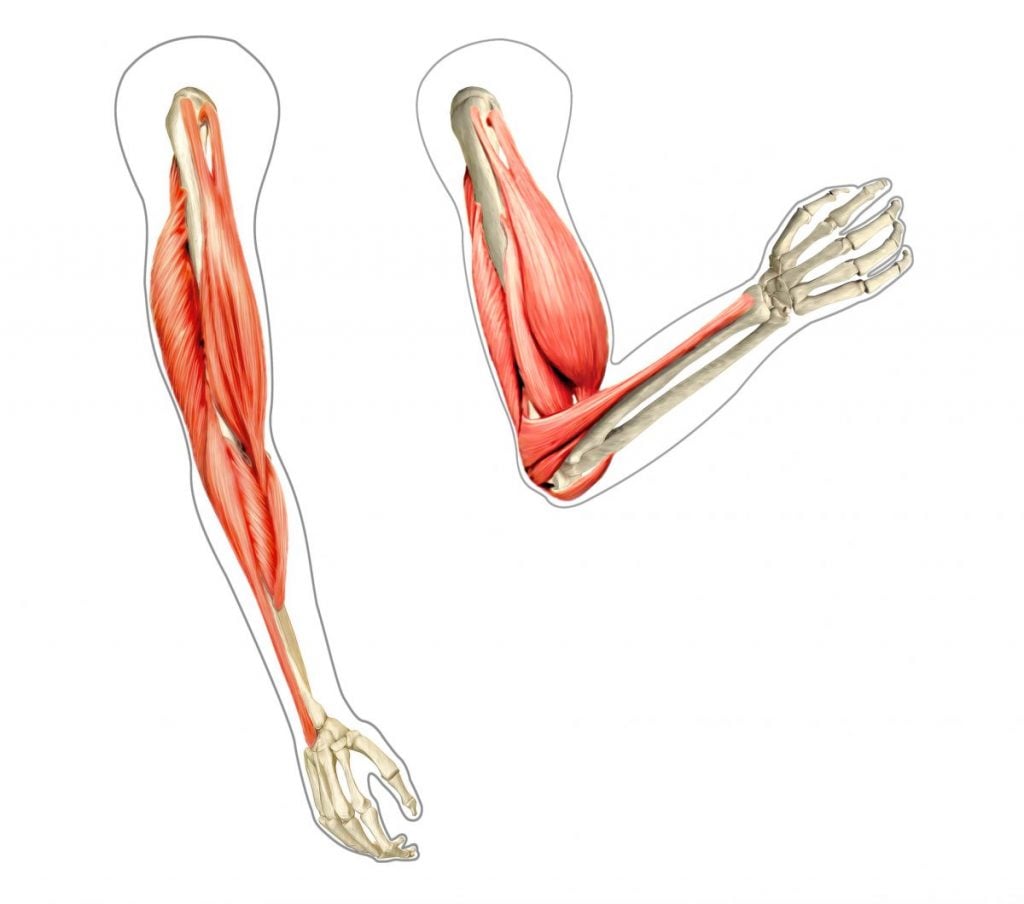 The anterior compartment of the upper arm consists of three muscles that lie in front of the humerus. The biceps brachii or biceps consists of two heads, long and short, which create flexion in the forearm and upper arm, and adduction in the upper arm. The brachialis muscle, which is underneath the biceps brachii, helps with forearm flexion. It connects the humerus and ulna and is the strongest of the elbow-flexing muscles. The coracobrachialis muscle is on the inner side of the humerus bone and raises and adducts the arm. 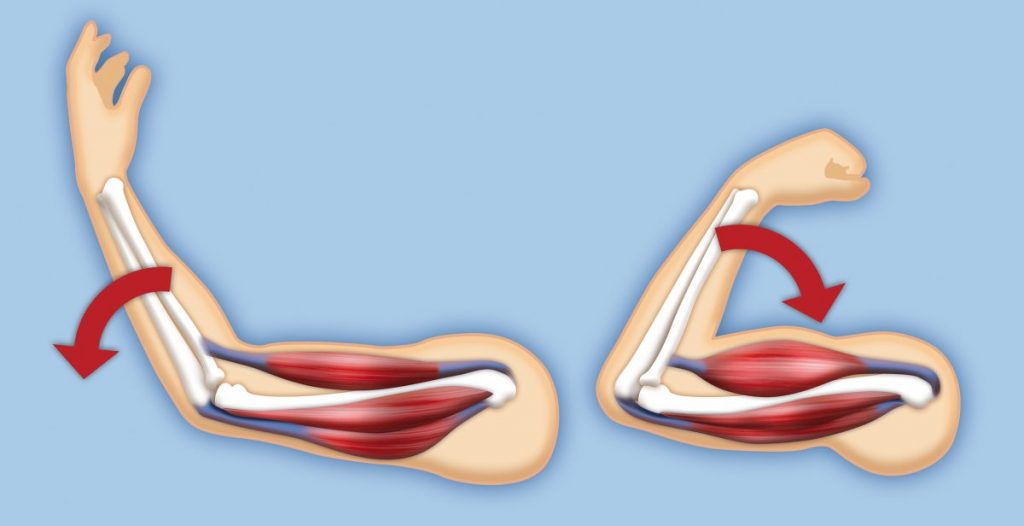 The two muscles in the posterior compartment of the upper arm lie behind the humerus. The triceps brachii or triceps stabilizes the shoulder joint and helps with forearm extension and flexion. This muscle consists of three heads and is the only one on the back of the upper arm. The anconeus muscle is considered an extension of the triceps that sits across the elbow, which assists with extension of the elbow and forearm rotation. 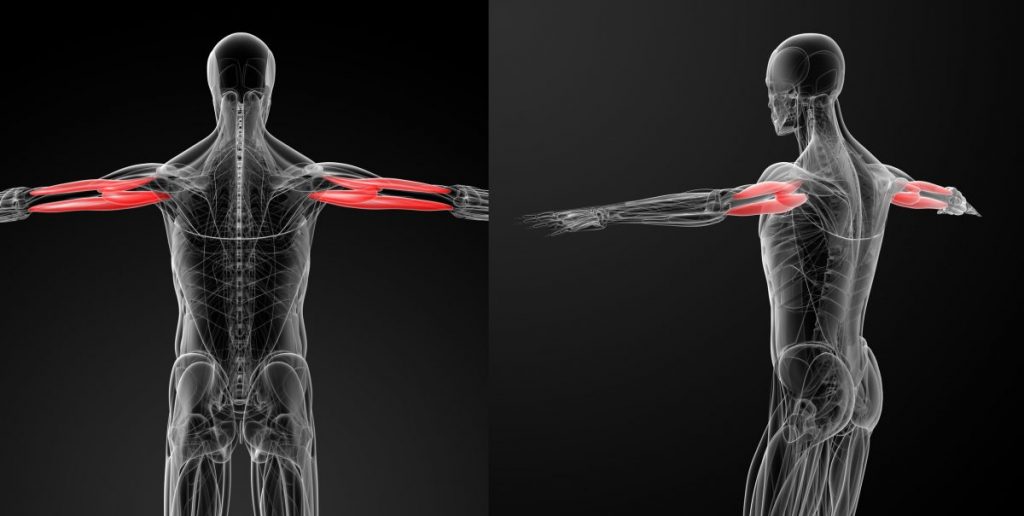 The anterior compartment muscles run along the inner forearm and are primarily responsible for rotating the forearm and flexing the wrist and fingers. There are four muscles in the superficial layer of the anterior compartment. On the ulnar side of the forearm lies the flexor carpi ulnaris, which is responsible for flexing and adducting the wrist. The palmaris longus, which 10% of the population is born without, flexes the hand at the wrist. The flexor carpus radialis adducts the hand and adducts and flexes the wrist. The pronator teres is a forearm rotator that aids pronation and supination. 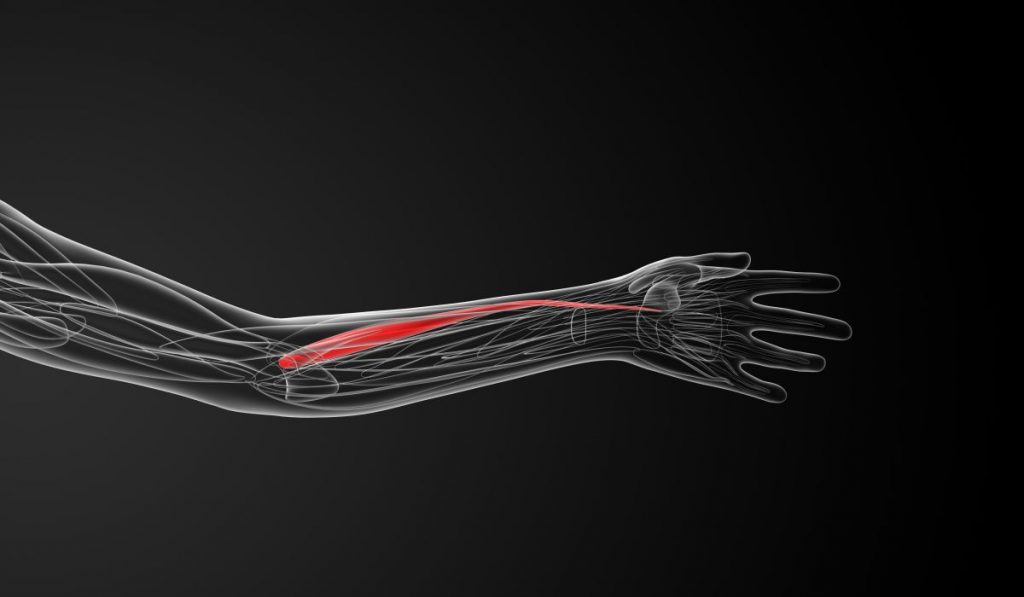 There is only one muscle in the intermediate layer of the anterior compartment: the flexor digitorum superficialis. This muscle runs from the bottom of the forearm to the fingers and helps flex the digits. Three muscles reside in the deep compartment of the anterior compartment of the forearm. The flexor digitorum profundus flexes the fingers’ distal joints, as when making a fist. The flexor pollicis longus is a thumb-flexing muscle, and the pronator quadratus rotates the forearm, much like the pronator teres. 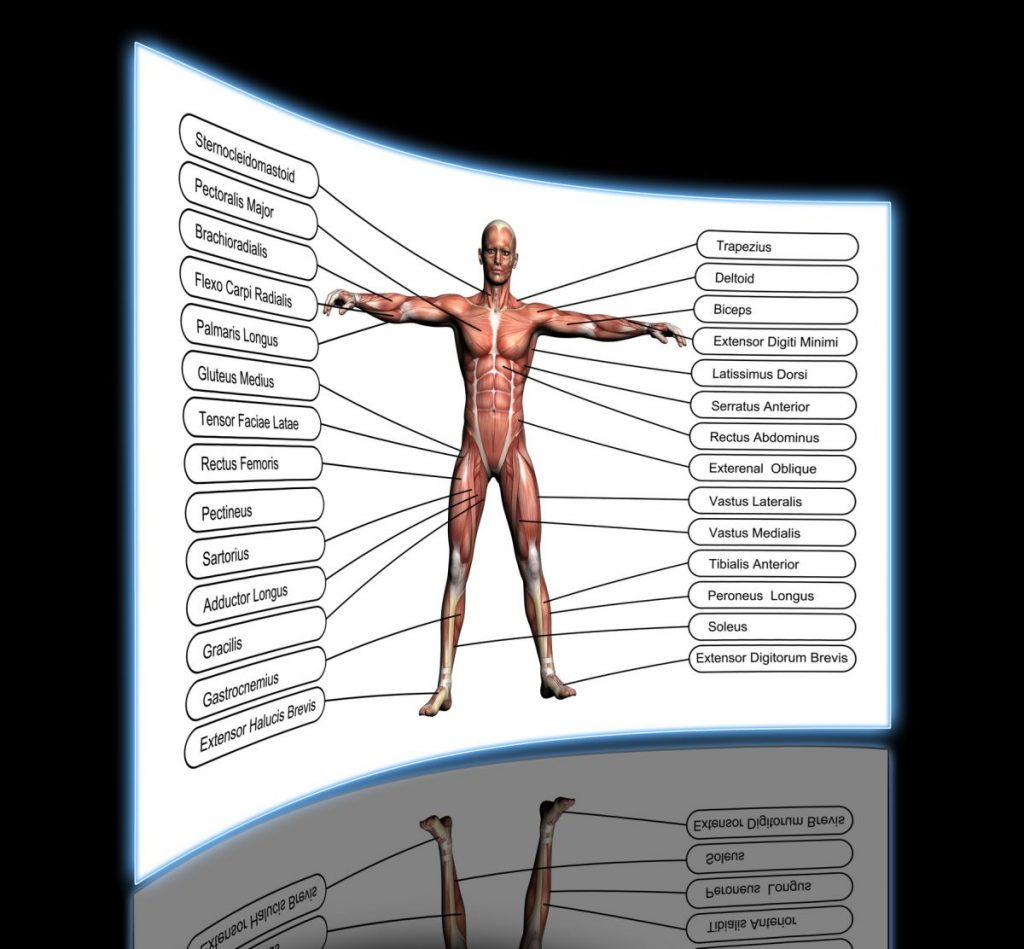 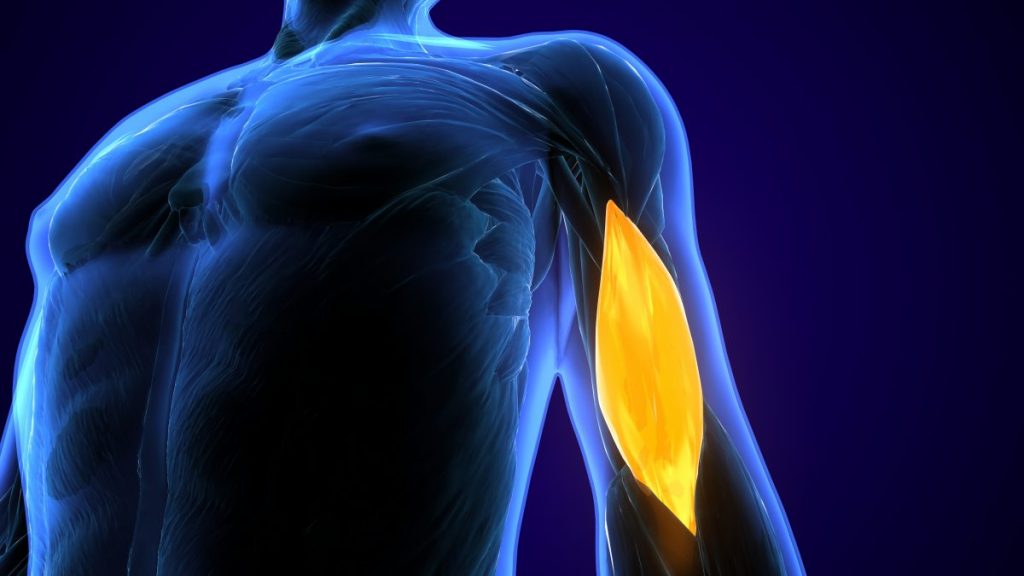 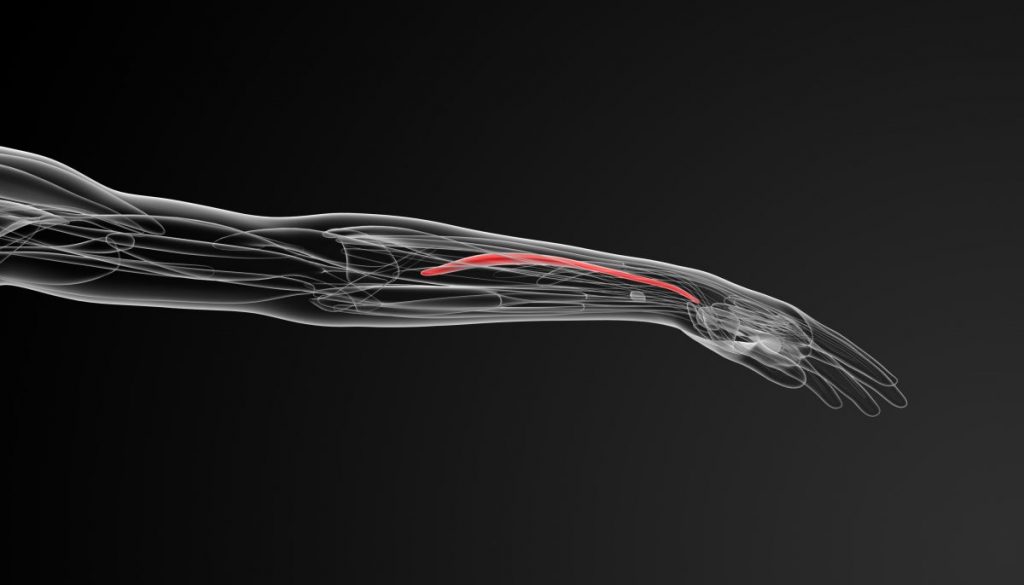 The three bones of the arm, the humerus, radius, and ulna, are attached to the muscles via tendons, tough, white, fibrous tissues that can handle a lot of tension. The tendon’s job is to transmit the forces of the muscles. A various number of tendons connect the bones and muscles of the arm. For example, the biceps muscle attaches at the shoulder and the elbow via three tendons. 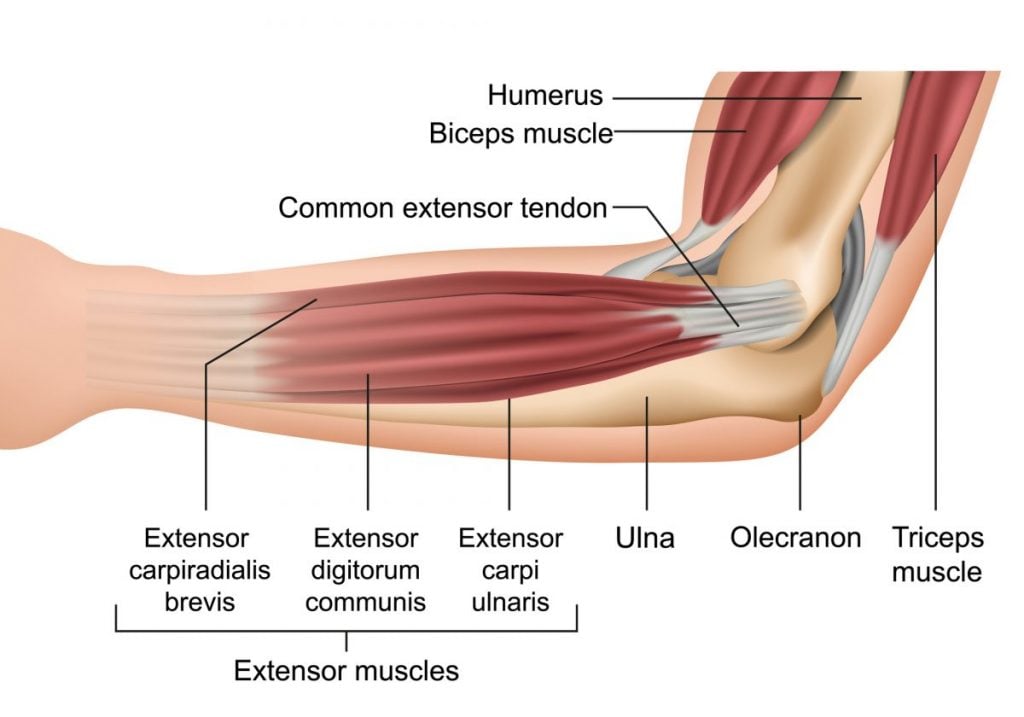 Exercises that involve all of the movements of which the arms are capable will help strengthen the muscles of the arm. It is also important to stretch these muscles, as well as take breaks from repetitive or static movements to help avoid knots that can form in the muscles. 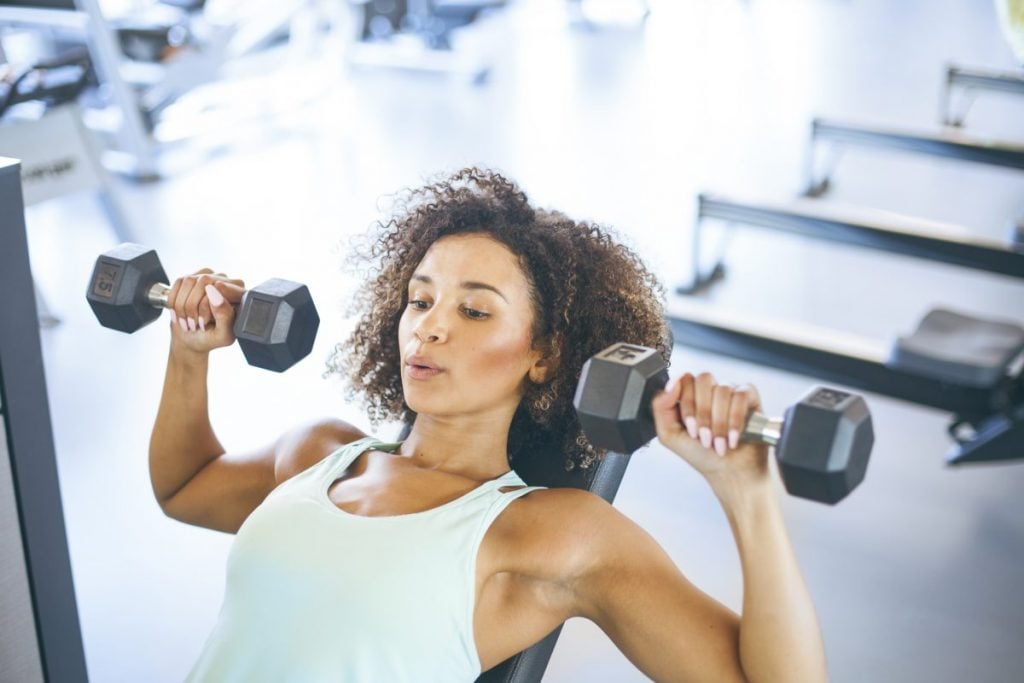 Conditions and Injuries of the Arm Muscles

Common muscle injuries include strains and tears. Other pain in the muscles may receive many different diagnoses, such as carpal tunnel syndrome or tendinitis. Sometimes, conditions that do not recede with the standardized treatments may be related to small contraction knots or trigger points in the muscle belly. 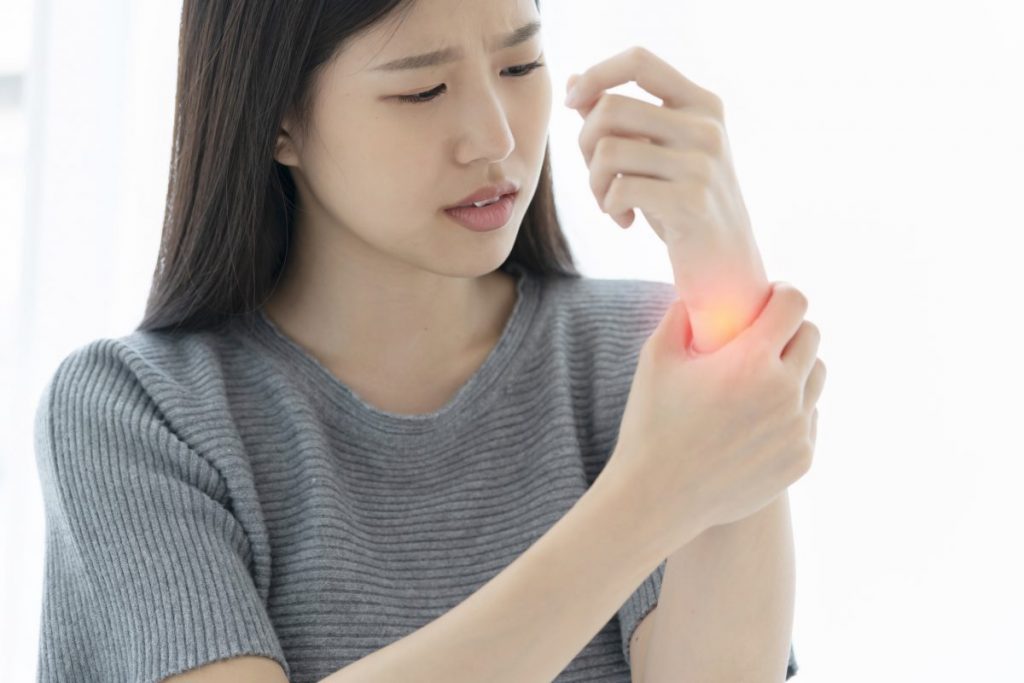