Route 66 is over 90 years old, and definitely, a road less traveled. However, for those with the time, there are plenty of weird attractions to be seen along this iconic road that starts in Chicago and ends in Los Angeles. For the best experience, stick to the route because each state has at least one unique attraction. Heavy on nostalgia, Route 66 still provides plenty of kicks. So start your engines and get ready for a fun journey.

But First, Some History

U.S. Route 66, also known as the Will Rogers Highway, was one of the original highways constructed by the U.S. Highway System in 1926. It was named Route 66 and ran from Chicago to Los Angeles. From its beginnings, U.S. 66 was designed to connect the main streets of rural and urban communities along its route because, at the time, most small towns had no access to a major national roadway. 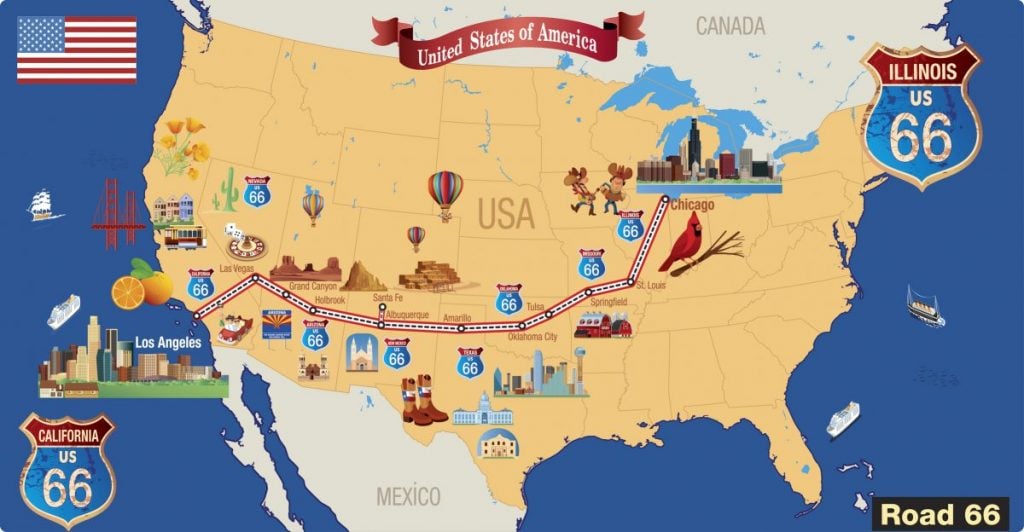 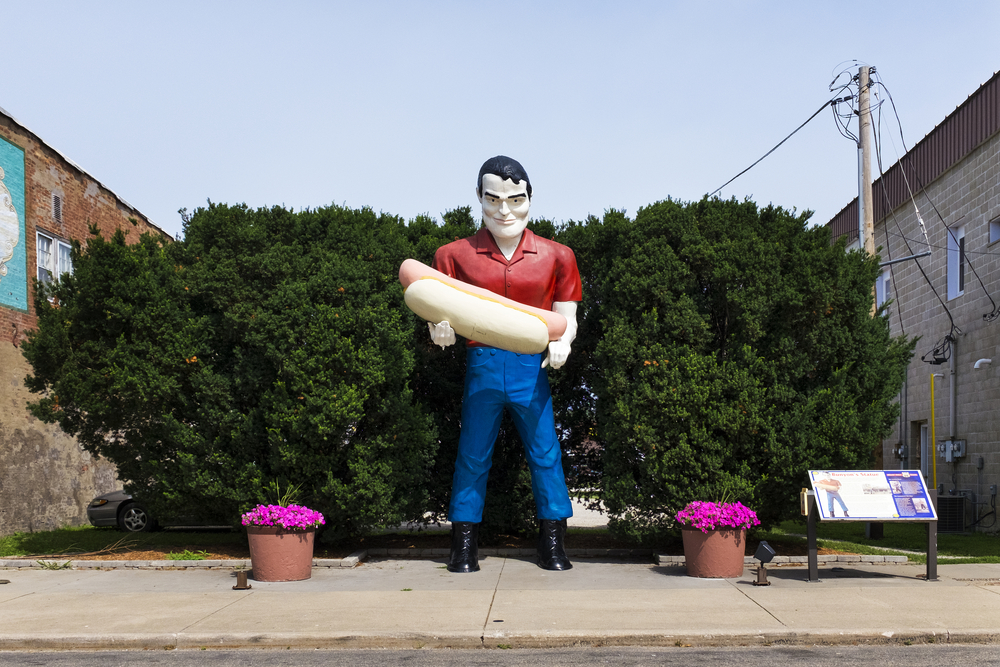 Rock on Down to Fanning

The world’s second-largest rocking chair in Fanning, Missouri. This giant rocking chair used to be the largest rocker in the world; now it's been demoted to the second largest. Casey, Illinois stole Fanning's thunder by building an even large one, a 56.5-foot tall giant. Despite it being the second largest, it’s still a whopping 42 feet tall. Built by the owner of a nearby general store, the rockers alone are more than 31 feet long and weigh about 2000 pounds each, and when they rocked, the earth seemed to move. Unfortunately, due to safety concerns, this massive chair no longer rocks. 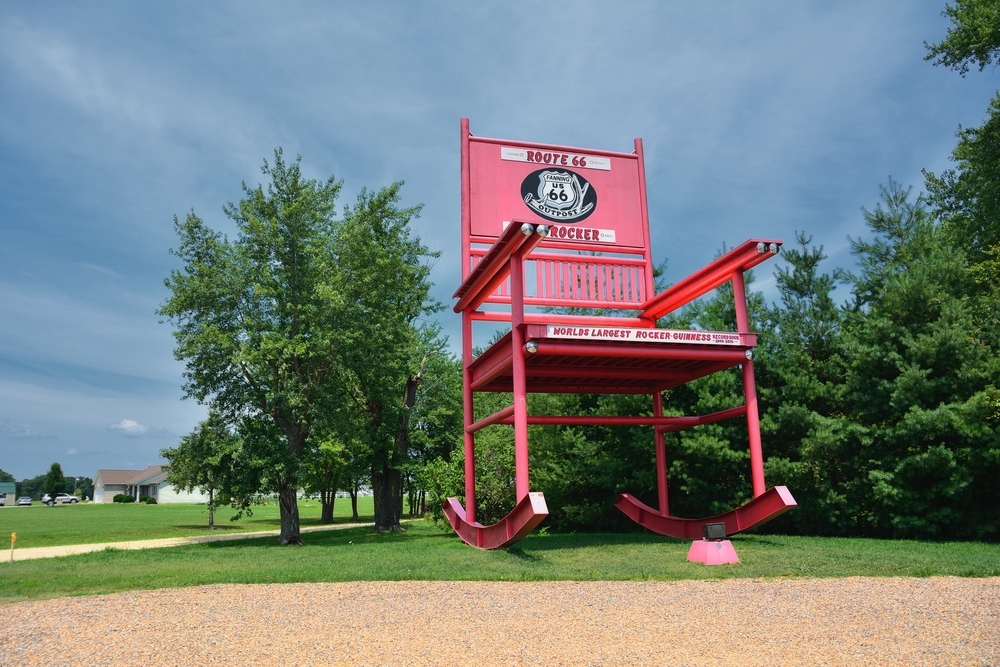 A Whale of A Stop

The Whale of Catoosa in Catoosa, Oklahoma. This big blue whale and its adjacent pond are hard to miss. Travelers loved nothing better than a quick dip to cool off their journey. When the original owners died, the whale turned even bluer as it began to fall apart. Lucky for visitors, and the whale, the citizens of Catoosa got together and restored the whale to its former glory. Today, people can stroll through the whale’s mouth and climb a ladder up the tail for a better vantage point. 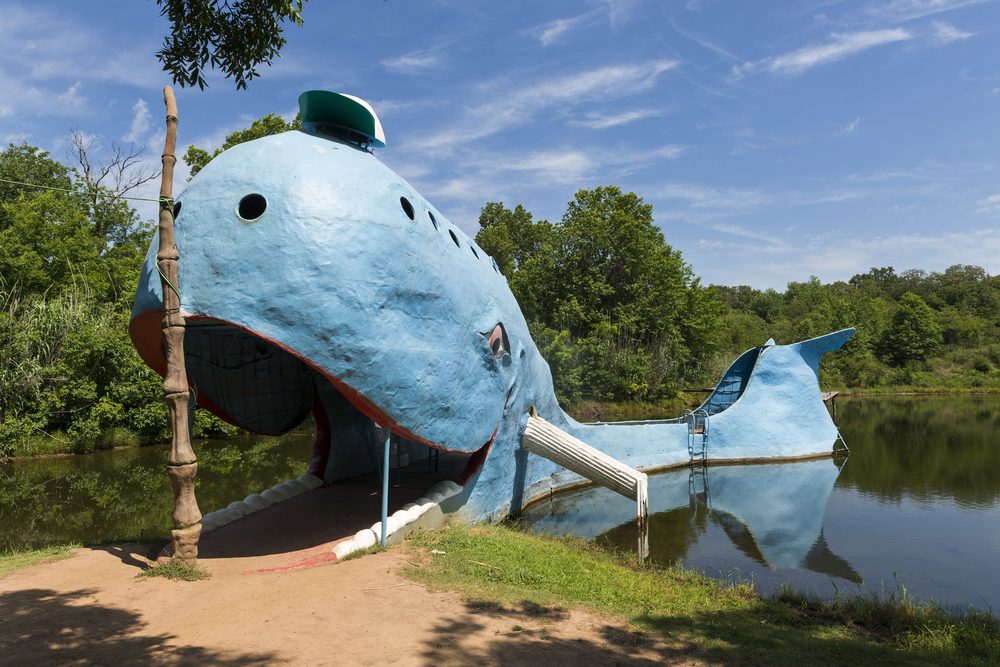 A Ranch of Cadillacs

Cadillac Ranch in Amarillo, Texas. This world-famous and definitely odd ranch is a few miles off the official Route 66 path. Even so, it is worth the extra mileage to swing on by. This ranch of a different color began as an art installation in the 1970s and has never lost its appeal. Visitors are even encouraged to add their own touch of paint to the cars. They just have to bring their own can of spray paint. 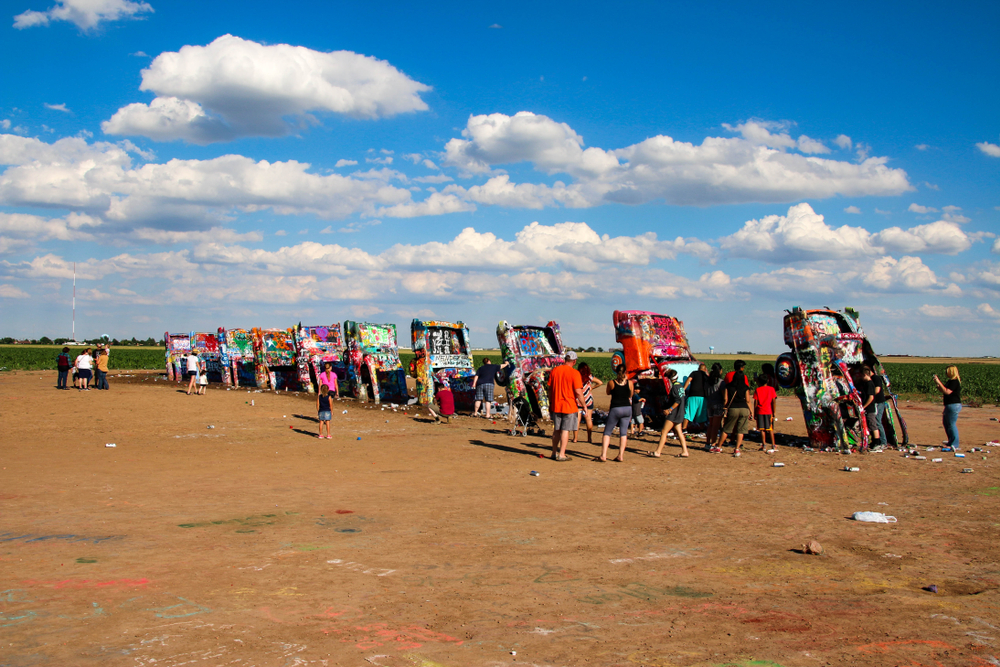 MidPoint Cafe in Adrian, Texas. Adrian, Texas is the midpoint of Route 66. From Adrian, drivers are 1,139 miles from both Santa Monica and Chicago. The Midpoint Café is a perfect place to stop and celebrate the halfway mark. The pie is homemade and the souvenirs are as camp as they come. 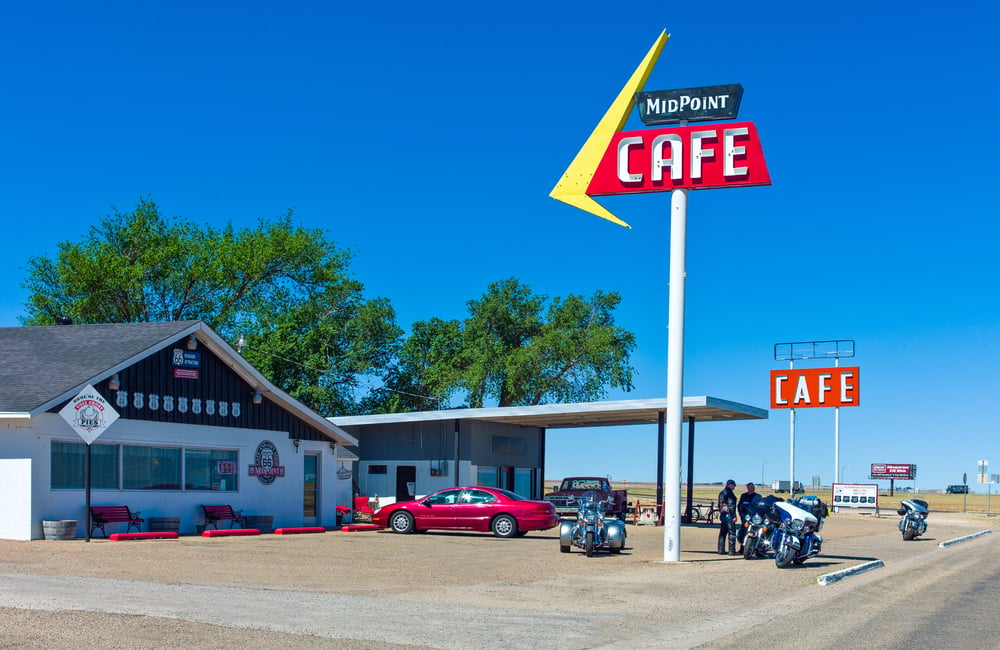 Put Your Feet Up for a While 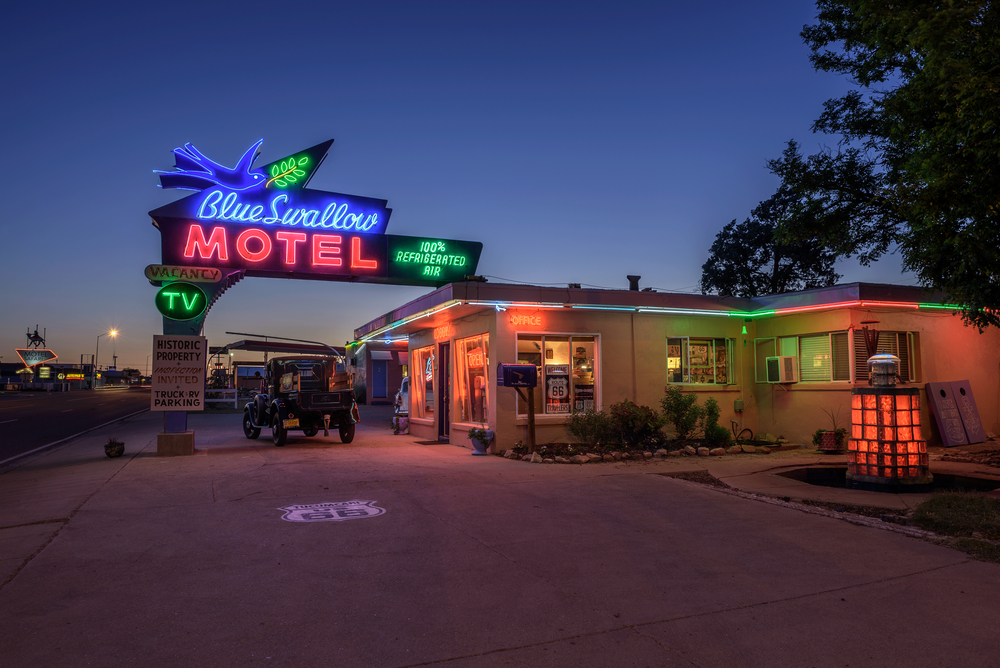 Angel & Vilma’s Route 66 Gift Shop in Seligman, Arizona. In 1987, two years after Route 66 had been decommissioned, Angel Delgadillo turned his barbershop and pool hall into the world's first Route 66-themed souvenir store. Others thought he was crazy, but Angel believed in the history of road. He became the first president of the Historic Route 66 Association of Arizona and convinced the state to declare the dead highway "Historic Route 66." 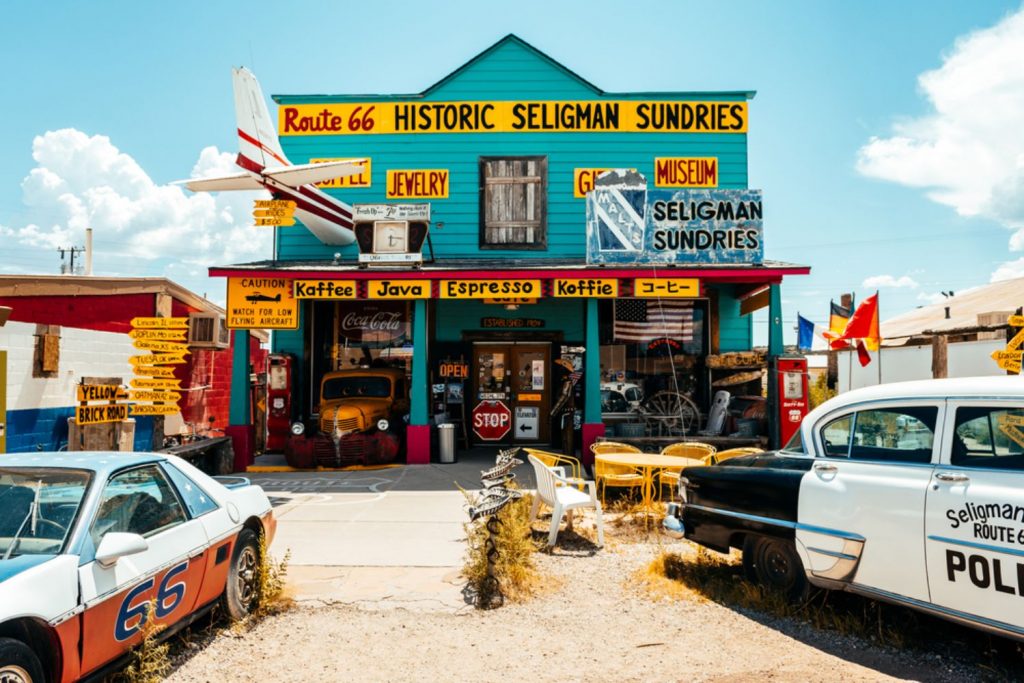 Check Out the Wildlife

You'll enjoy the wild burros in Oatman, Arizona. After driving the narrow, winding roads of this part of Route 66, arriving in Oatman, Arizona is a welcome relief. What at first appears to be a pleasant town, soon reveals itself to be anything but thanks to the wild burros roaming free. The burros are used to people and not afraid if approached, however, do not feed them. Also be careful when you try to pet one. Cute as they are, they are still wild animals. With big teeth. 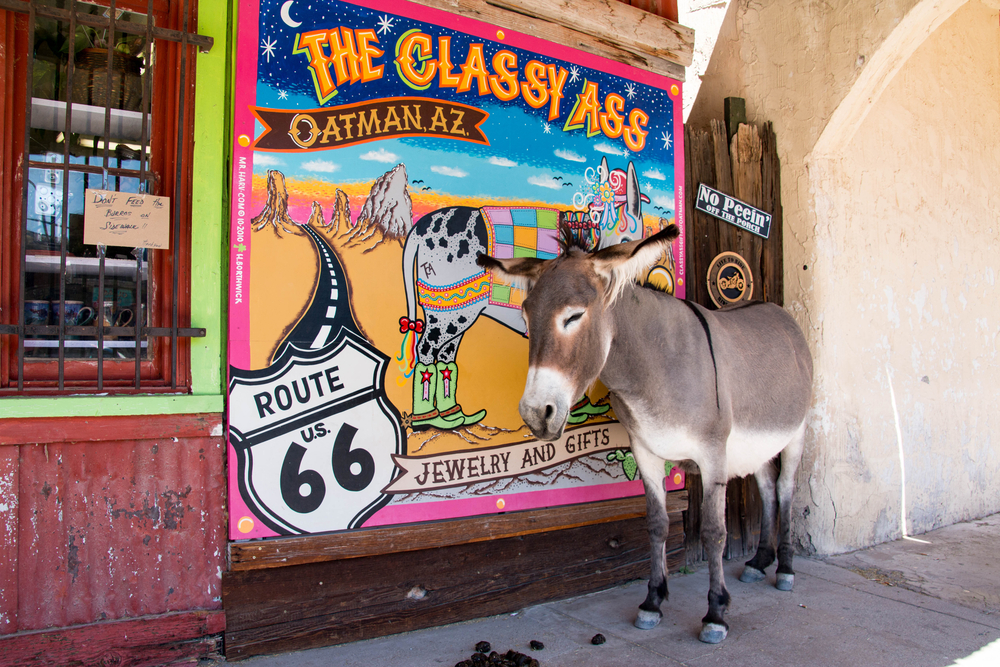 Spend the Night in a Wigwam

The Wigwam Motel in San Bernardino, California. In the 1930s and 1940s, Wigwam Villages used to be all over the U.S. from Kentucky to Louisiana to Florida. Today, only a few remain. And one of these is near the western end of Route 66 in San Bernardino, California. A cool motel, where weary drivers can sleep in a private tepee-like room. Each unit even has a bathroom Built in 1949; the Wigwam Motel is listed on the National Register of Historic Places. 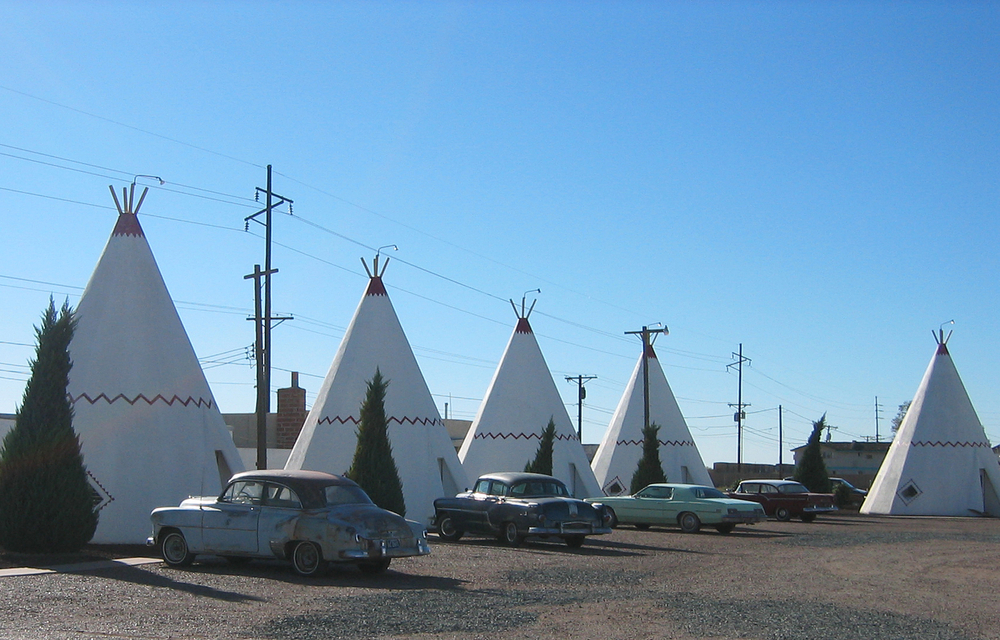