Roadside attractions are a part of American travel lore. Some are awe-inspiring, others are comical. And some even border on being offensive. The tradition of stopping to see these unusual and often one-of-a-kind sites dates back to the 1920s. Businesses created strange and unique signs, buildings, and sculptures to attract travelers' attention and hopefully, entice them to part with some of their tourist dollars. Today, there are thousands of roadside attractions across the country to satisfy your wanderlust and pique your curiosity.

The idea behind this famous roadside attraction came from the eccentric billionaire, Stanley Marsh 3, a man who loved to poke the establishment with his artistic endeavors. Ten Cadillacs were originally purchased from a junkyard, painted, and buried nose-down in a pasture. The site has moved a few times but seems to have found a permanent home along the old Route 66 highway, parallel to Interstate 40. Visitors from all over the world stop here, so you never know who you'll meet. It is a long-standing tradition to bring a can of spray paint along and add your own artistic touches to the Caddies. 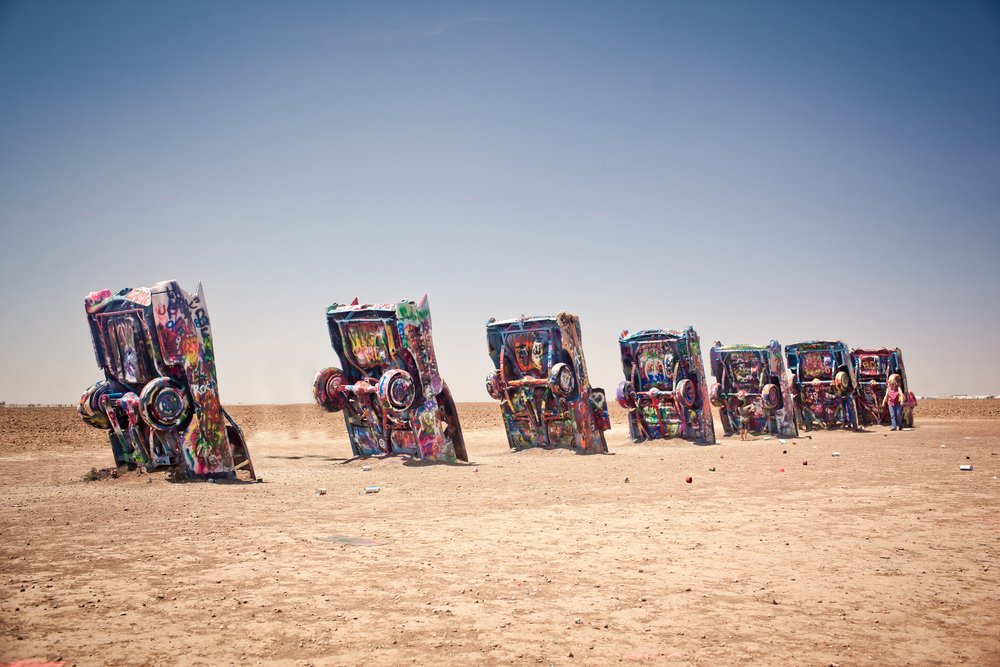 To some, this "Land of Giants" set up in a collector's rural front yard is on the kitschy side. For others, it's a quirky collection of 20 to 25-foot, unique statues that inspire wonder. There are a variety of sculptures, including a giant Paul Bunyan, a Uniroyal Tire Gal, a Midas Muffler Man, and a rendition of a Big Boy restaurant statue. If you're a fan of The Simpsons, you'll love the kiddie roller coaster with statues of Bart, Lisa, Maggie, Homer, and Marge sitting in the cars. 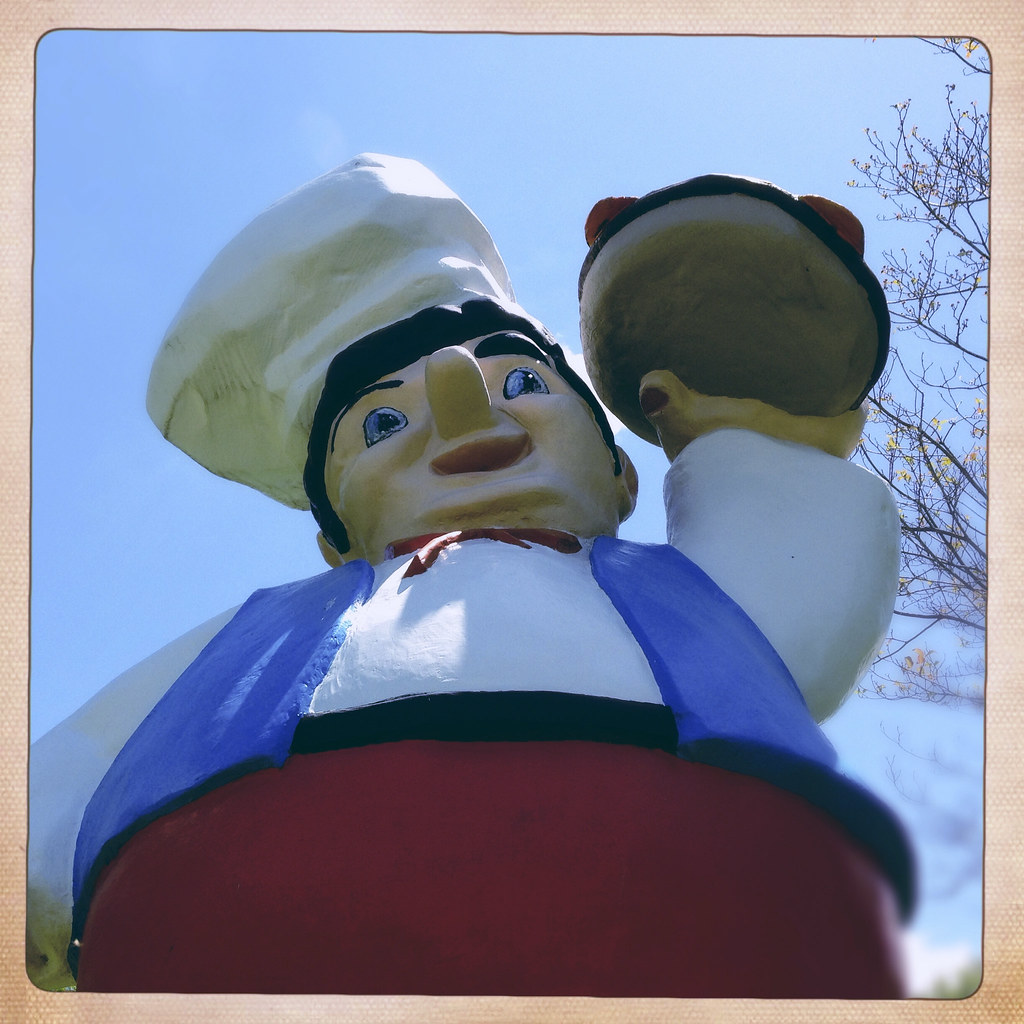 She's more than 137 years old, but Lucy the Elephant has survived Mother Nature's wrath, new ownership, relocations, and the wrecking ball. This 65-foot wooden structure finished construction in 1881, which makes her older than the Statue of Liberty and the Eiffel Tower. The builder, James V. Lafferty, originally intended for Lucy to bring attention to local real estate and also to increase tourism, which it has. Over the past century, Lucy has served as a restaurant, a tavern, and was the home to a local doctor and his family for a while. She became a National Historic Landmark in 1976. Guided tours are available. 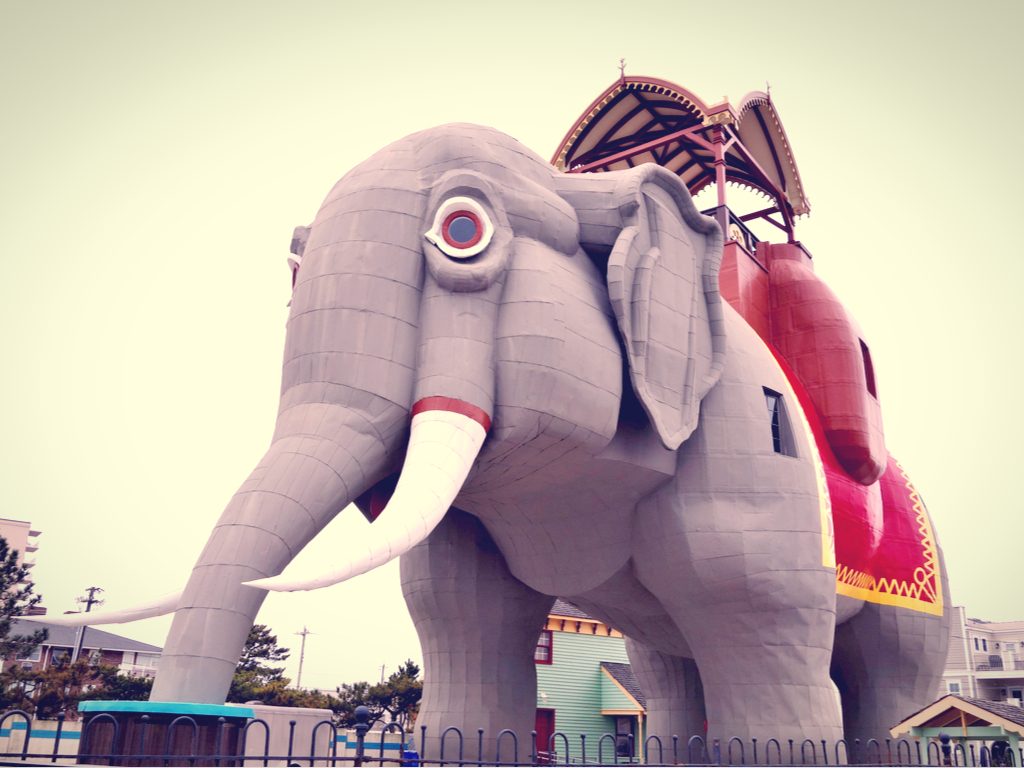 Since the early 1990s, thousands of people have been sticking their used chewing gum on this 50-foot wall. The city has only cleaned the wall once, back in 2015. It took workers about 130 hours to remove the 2,350 pounds of gum stuck to the wall. In some places, the gum was several inches thick. But, the bare wall didn't stay that way for long, and people immediately started adding their gum to the wall again. Sure, it smells bad. But feel free to add your own wad of chewed-up gum. Just remember to immediately wash your hands. This is one colorful roadside attraction you shouldn't miss. 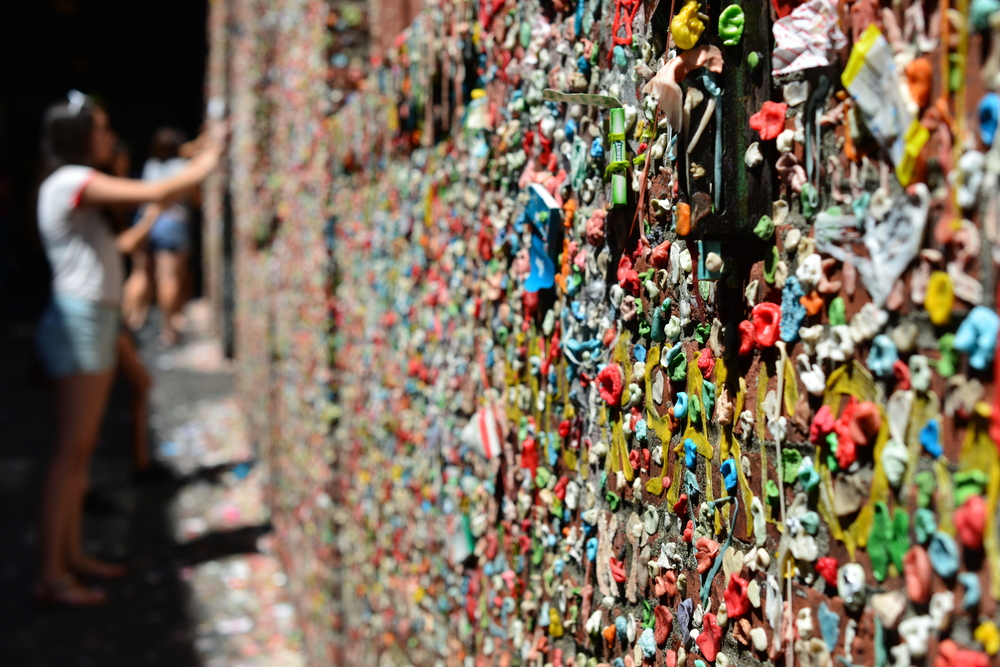 This giant blue whale with the toothy grin was a popular feature of the Route 66 attraction, Nature's Acres and Animal Reptile Kingdom. Pipe and concrete make up the entirety of the colossal creature. The owner, Hugh Davis, presented it to his wife, Zelta, in 1972 as an anniversary present. The 80-foot-long sperm whale quickly became the featured attraction and eventually joined a long list of famous Route 66 roadside attractions. Although the park closed in 1988, volunteers have repaired and painted the whale every few years. You can still visit the whale, who hosts a souvenir and concession stand nearby. 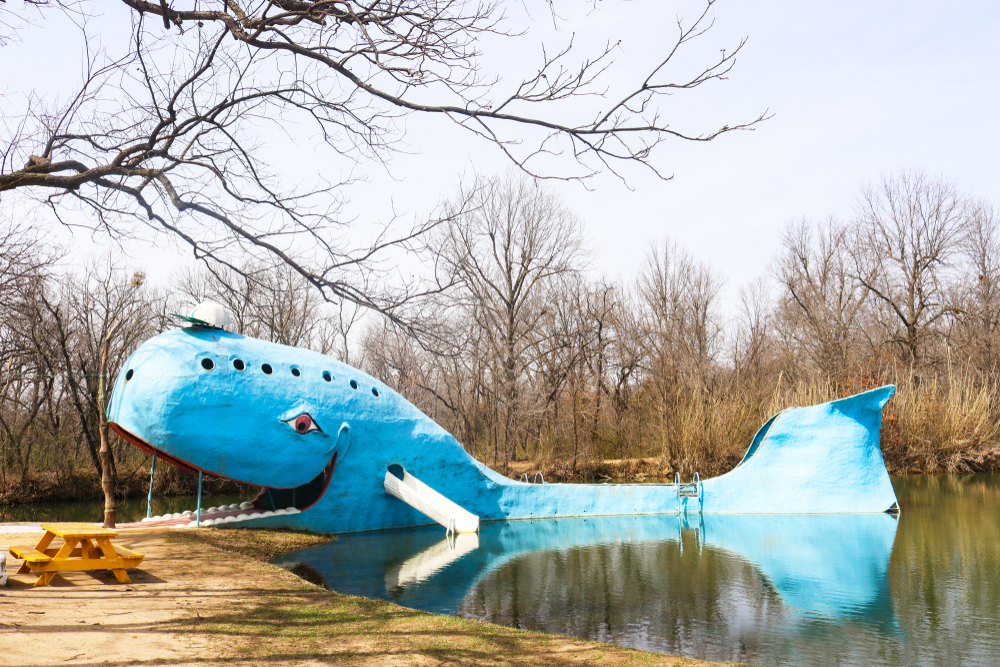 On a dirt road between Old Dale and Twentynine Palms, California is the "small" rural community of Sunvale, a home for discarded toys, referred to as "smalls." The site was created by an artist named Cathy Allen as a commentary of prevalent social issues such as the environment and the gentrification of communities. Each of the discarded toys has its own unique backstory. The project, which was started in 2017, grew from just three discarded toys to the current total of 56 residents. The artist also created homes and two community buildings for the "smalls" to enjoy. You won't find people here, but you will no doubt see a toy that sparks a childhood memory. 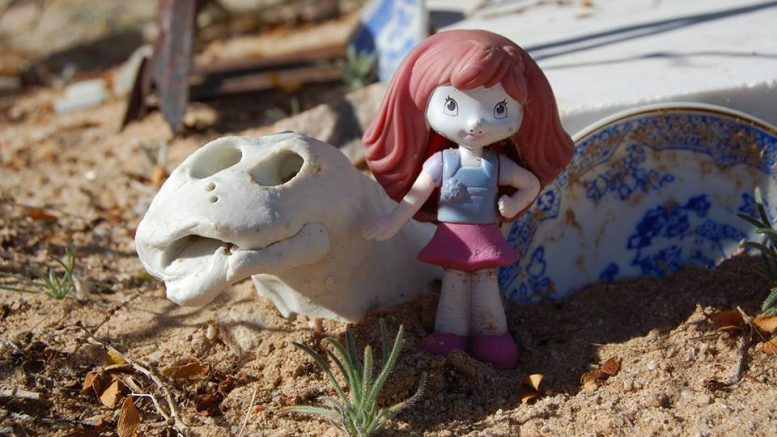 You may never have the opportunity to see the real Stonehenge, but you can see a styrofoam copy inspired by it. Fiberglass sculptor Mark Cline created a replica of the ancient English monument as an April Fool's joke in 2004. People heard about it and arrived from all over the country to see the roadside attraction. Although it has moved from its original site in Natural Bridge, visitors can now see it during the annual Fall Festival at Cox Farms in Centreville. 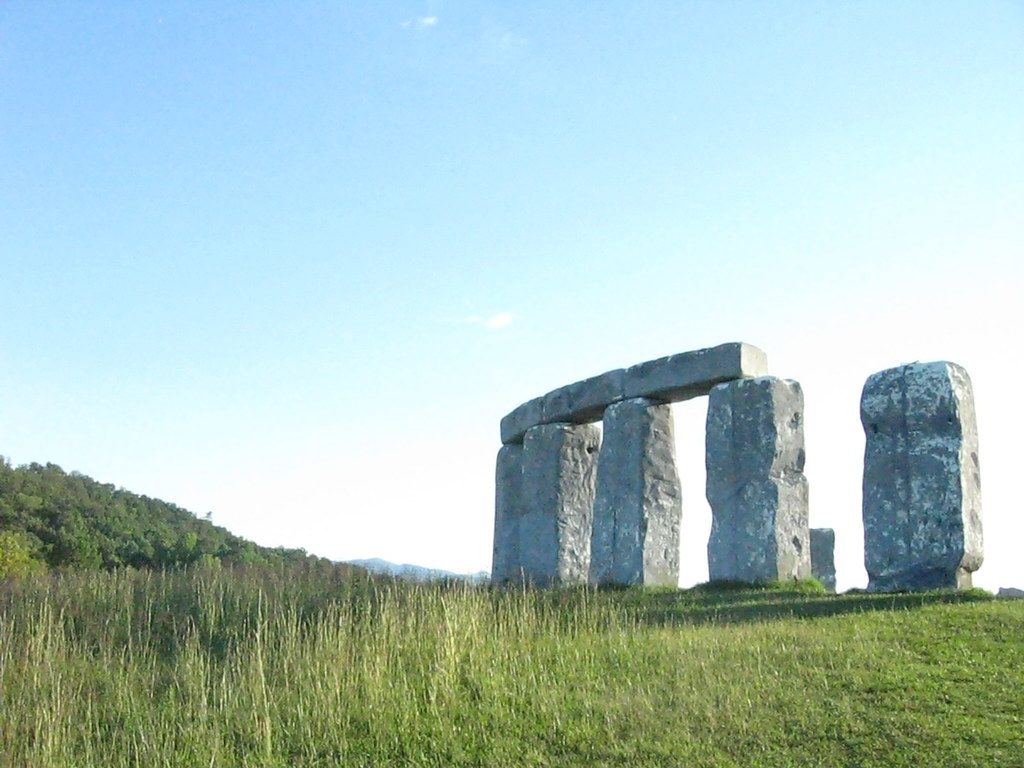 The sun illuminates its four silver towers so that you can see it from miles away. This unusual castle was created from scraps of aluminum gathered from the nearby neighborhood. The builder, Donald Cano Espinoza, cut open and flattened beer cans before adding them to the walls. He hammered out aluminum siding to cover the castle's seams and found discarded hubcaps, grills, and wire to help build his creation. The five separate structures include a house, a garage, and a shed in addition to the towers. It is an amazing example of unique folk art. You may even catch sight of the builder during your visit. 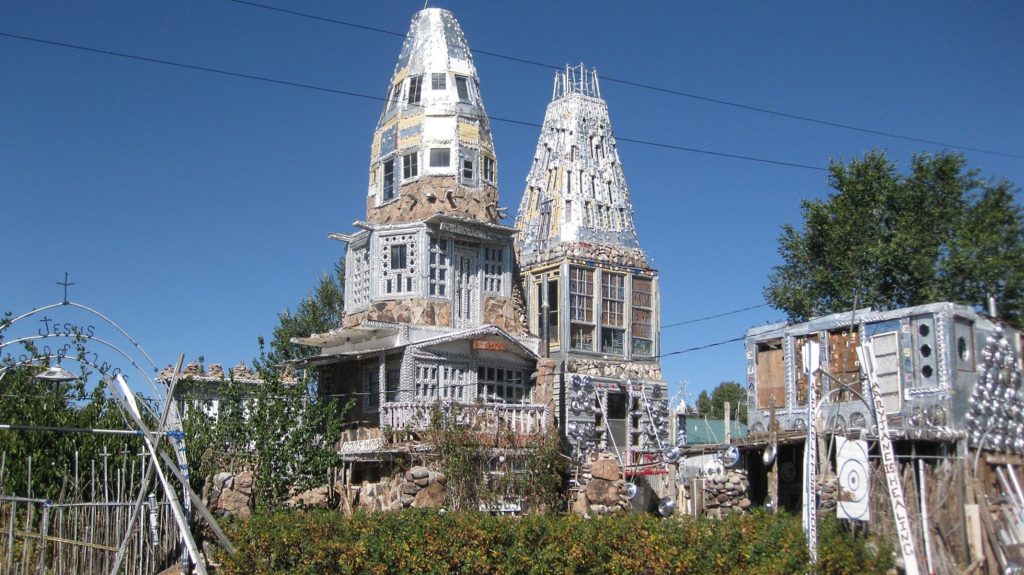 It's a tourist attraction now, but its original concept from 1970 was a home-away-from-home for travelers visiting Alaska. Construction on the four-story concrete hotel never finished and its doors never opened to the public. The cost of its construction proved too much for the owner and was unable to meet building codes. Many visitors say the abandoned hotel gives off a creepy vibe and have reported hearing strange noises coming from the inside. The interior remains locked, so you can't enter the structure. But viewing it from the outside lets you appreciate this amazing example of one-of-a-kind architecture. The building is so large that planes traveling overhead can see it from 30,000 feet. 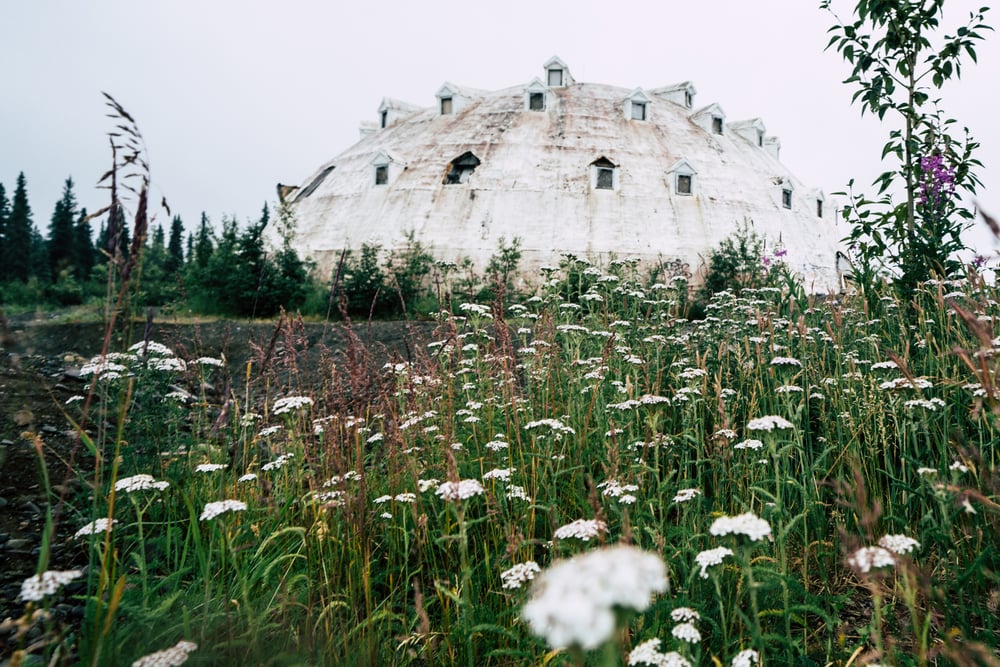 A 32-mile stretch of highway between Gladstone and Regent, North Dakota is famous for one of the nation's most iconic roadside attractions. This collection of giant metal sculptures offers depictions of both wildlife and people. You'll see Teddy Roosevelt on a rearing horse. There's the World's Largest Grasshopper, in addition to Deer Crossing, and a Covey of Pheasants. The Tin Family sculpture features a youngster with a lollipop in his hand and propeller on his head. The artist is a local resident, Gary Greff, who vows to continue adding new projects to the site. 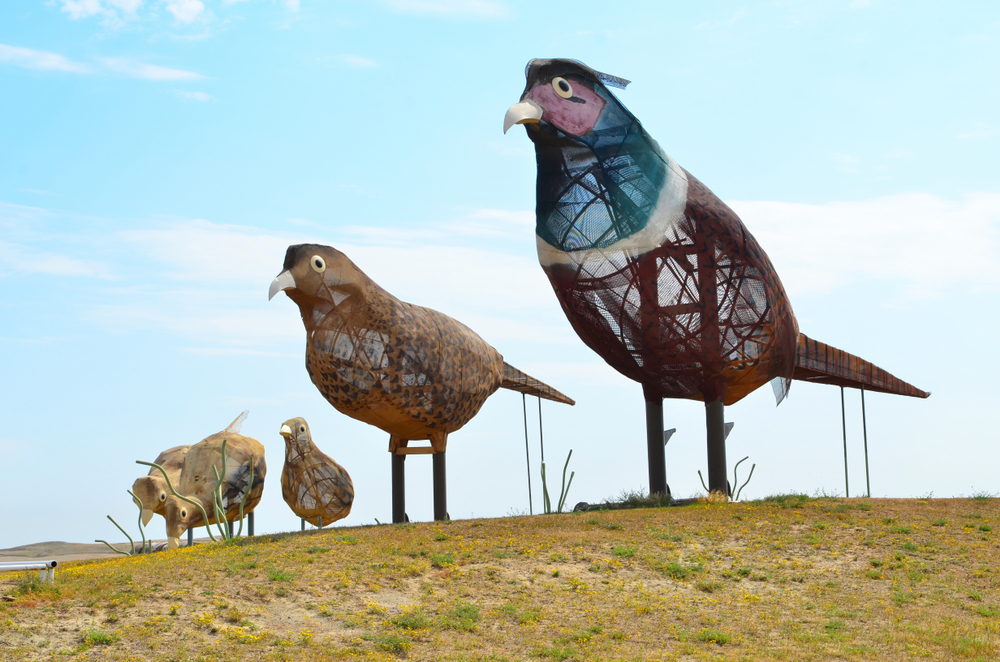 This massive granite structure in rural Georgia, near the South Carolina border, is a bizarre Stonehenge-like structure. The granite has engravings of ten rules in eight different languages for a post-apocalyptic world. No one knows for sure who paid for the structure. But some believe the Rosicrucian Order, a community of mystics who study metaphysical laws, financed the structure's construction. Others think it was CNN creator, Ted Turner. If you enjoy the unusual, supernatural side of life, add this site to your bucket list. But beware: visitors say standing next to the structure, and reading the messages is a chilling experience. 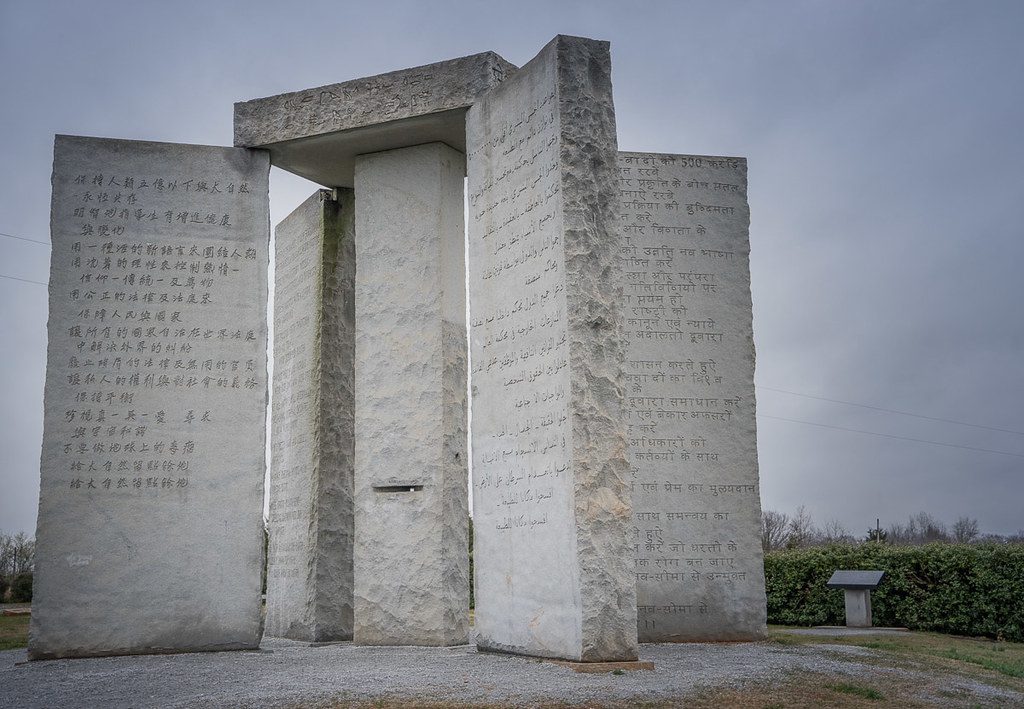 Hole in the Rock, Moab, Utah

If you drive down U.S. Highway 191 in the southern part of the Beehive State, you'll find one of the most unique roadside attractions in the country. You can't miss it. It's the huge mountain of sandstone with 20-foot-tall white letters painted on it that says, "Hole N" The Rock." This 14-room, 5000-square foot home was built into the mountain of rock. It was once a cave used as a cowboy camp in the first part of the 20th century. But in 1945, two brothers named Christensen expanded the cave and first created a diner, feeding travelers during the uranium boom. They kept expanding the cave to build a home inside. You can take a guided tour of their home, then relax at the petting zoo, browse for metal, or shop for unique gifts at the gift shop. 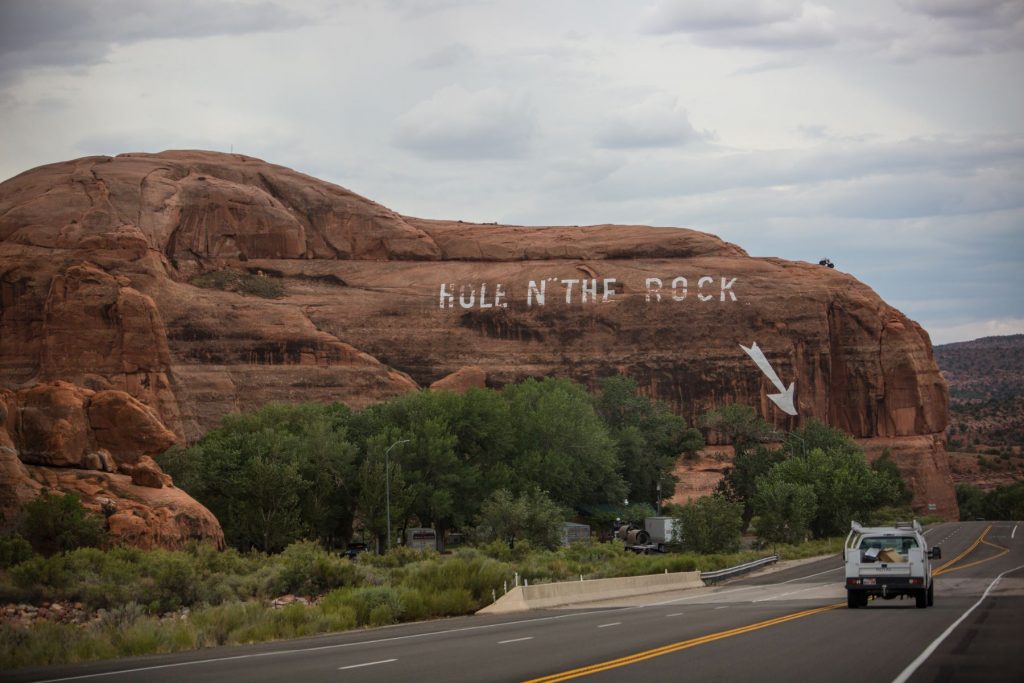