A popular theme park located outside of Atlanta, Six Flags Over Georgia is a testament to amusement park fun. The park is situated on 290 acres and features a myriad of rides and attractions. Six Flags Over Georgia takes inspiration for its thematic attractions from well-known franchises like Looney Tunes and DC Comics. Famous characters like Batman, Yosemite Sam, Wonder Woman, and Daffy Duck lend their likeness to many of the park’s rides, games, and entertainment venues. With attractions designed for both children and adults, the park welcomes thousands of guests each year.

Six Flags Over Georgia bills Batman: The Ride as one of its flagship thrills. This roller coaster zooms through corkscrews and drops at about 50 miles per hour. Fans of the DC comic hero will recognize features of the roller coaster that are inspired by Gotham City, Wayne Industries, and the Bat Cave. Bats aside, the ride’s gravity-defying loops and turns invariably have riders feeling butterflies from start to finish. 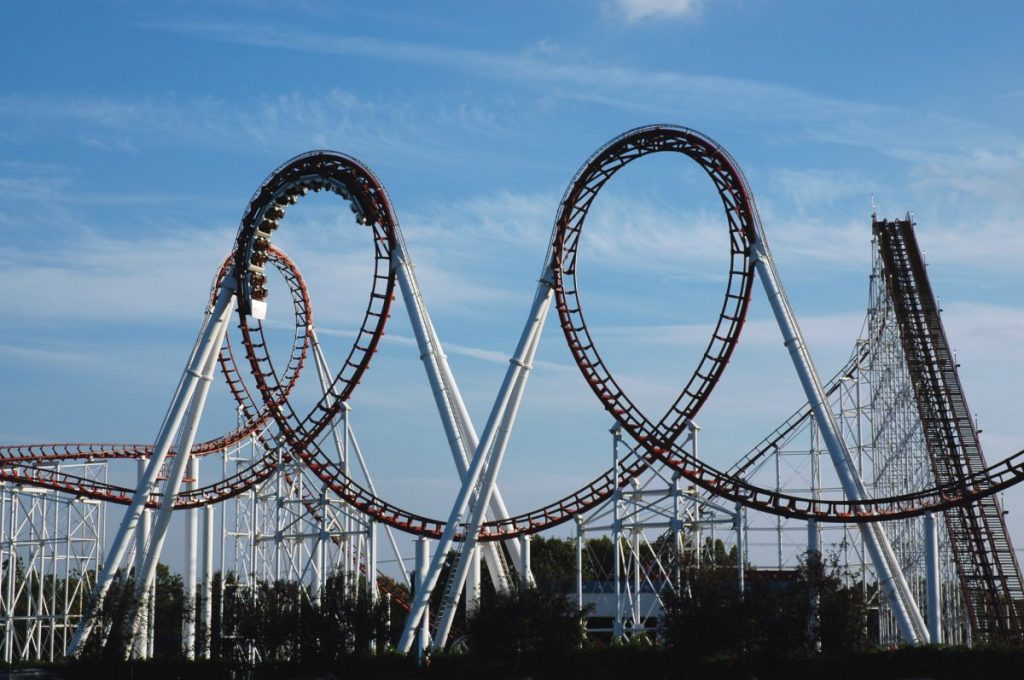 Six Flags Over Georgia features a popular water park called Hurricane Harbor; Tsunami Surge is one of its most popular attractions. The water park opens during the summer months and, while many of the water rides offer visitors the chance to cool off, Tsunami Surge provides extra thrills with its zero-gravity plunge. Featuring a 125-foot-long whirlpool, Tsunami Surge takes riders for a breathtaking barrel-ride filled with twists, turns, and splashes. 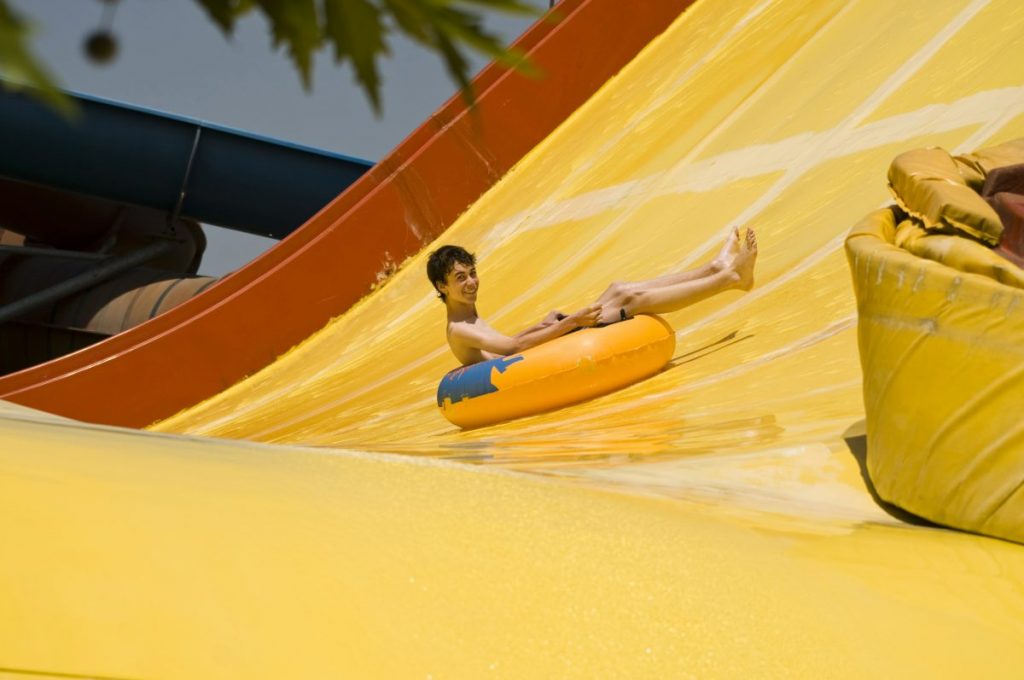 Ever wonder what it’s like to drop down 100 stories? You’ll get your chance if you dare to ride Acrophobia, one of Six Flags Over Georgia’s most popular thrill rides. With its 50-miles-per-hour drop, Acrophobia is an exhilarating gravity-defying ride that also provides riders with a birds’ eye view of the entire surrounding park. As if the heart-pounding drop wasn’t enough, this ride also turns riders for 360 degrees as they ascend to the top and tilts them during the long vertical drop. 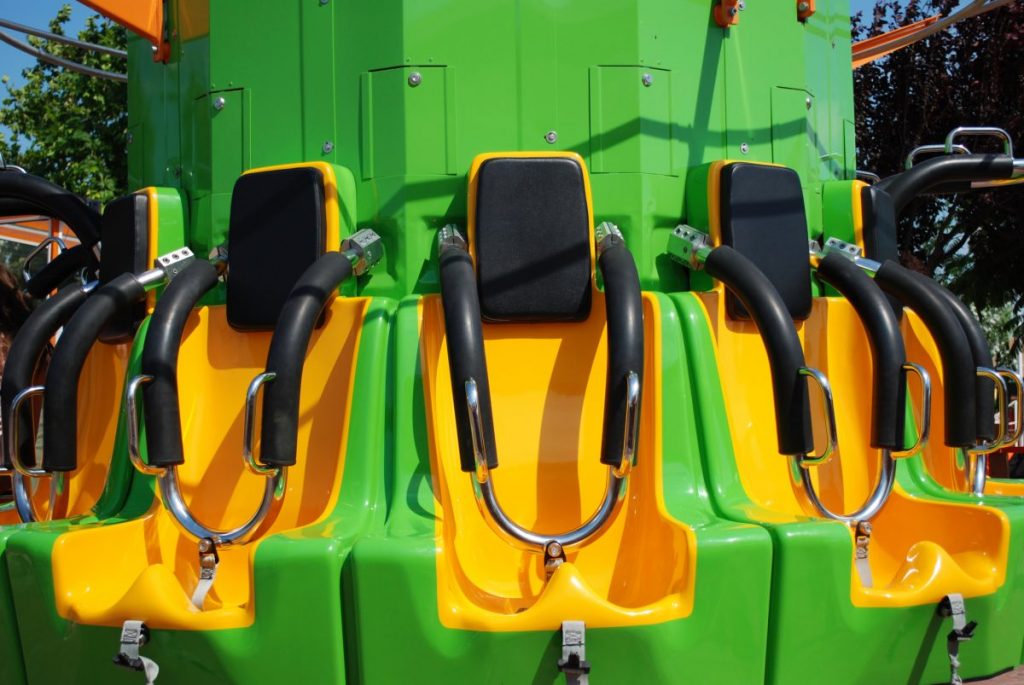 Kids and adults alike love Gold Town Racers and its go-kart action. This attraction features a racetrack filled with twists and turns. The racers speed around the course trying to finish first. Younger drivers will have to ride with an adult, but kids who meet the height requirement will get their chance to steer themselves around the racetrack for an adrenaline-pumping ride. 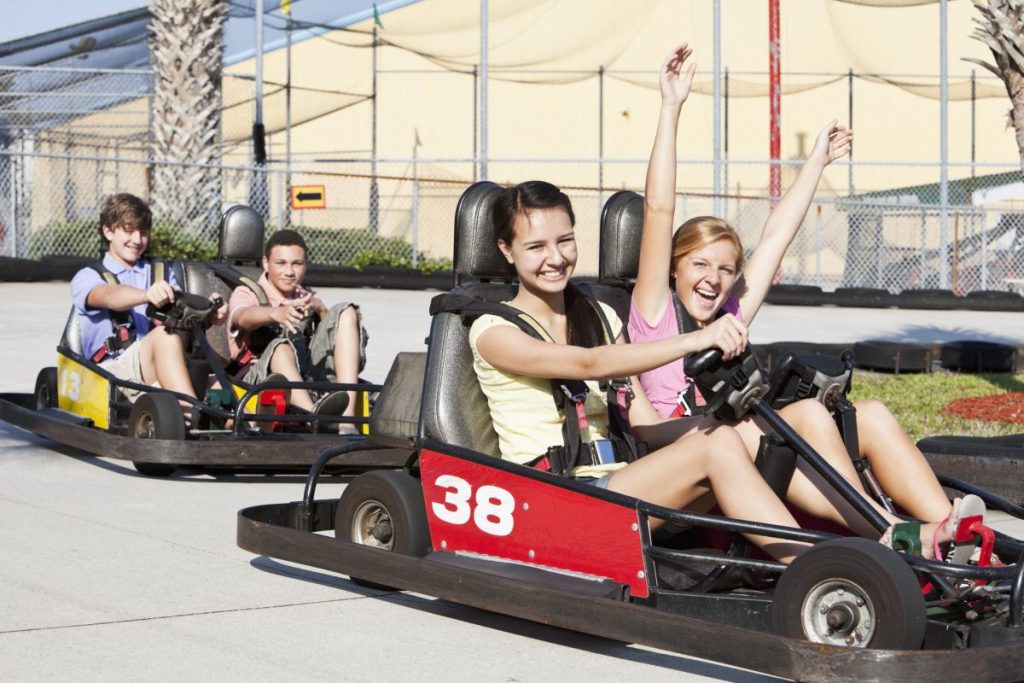 What’s a day at the amusement park without food and treats? Six Flags Over Georgia features lots of snack counters and eateries, but Boomtown Snacks is a favorite with visitors because of its classic carnival fare. Find cheesy nachos, popcorn, and pretzels as well as lots of snacks that are easy to carry while you walk from one section of the park to the next. Other notable food and snack venues in the theme park include Gotham City Eatery, Johnny Rockets, and Tidal Wave Café. 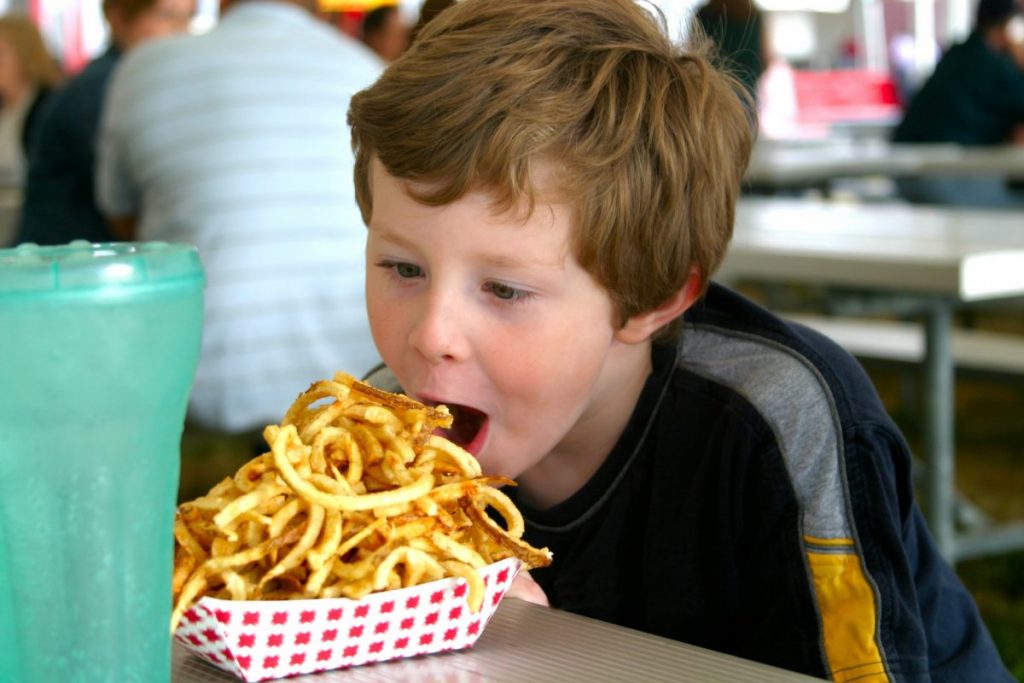 Six Flags Over Georgia features many family-friendly rides, including rides designed especially with young train conductors in mind. Marthasville Railroad Station features a classic locomotive that sets a gentle pace that’s just right for young riders. The train journey courses from Peachtree Square to Gotham City. The journey affords kids the chance to witness other areas of the park while enjoying the toots and whistles of the train. 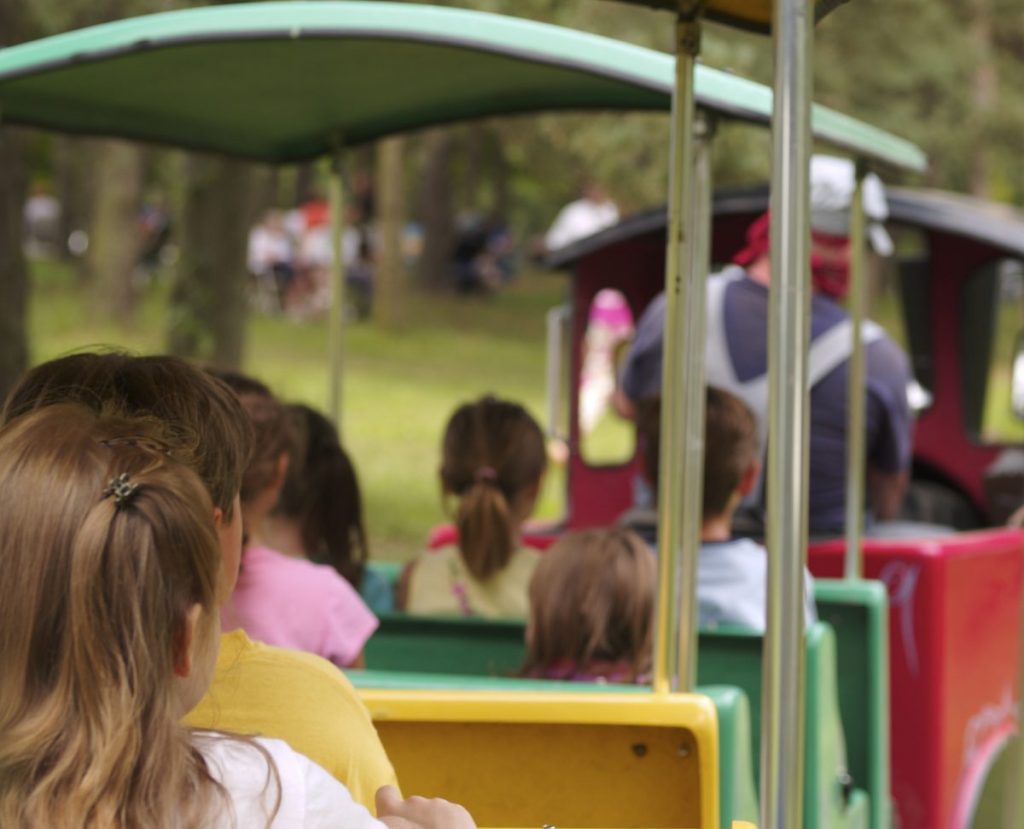 Any ride based on the DC village Joker is bound to be a mind-bending experience. Six Flags Over Georgia delivers a thrilling journey if you are brave enough to ride The Joker Chaos Coaster. This roller coaster features seven stories of twists, loops, and dips. Find this ride in the Gotham City part of the theme park. For mad-capped fun, board this coaster if you dare. 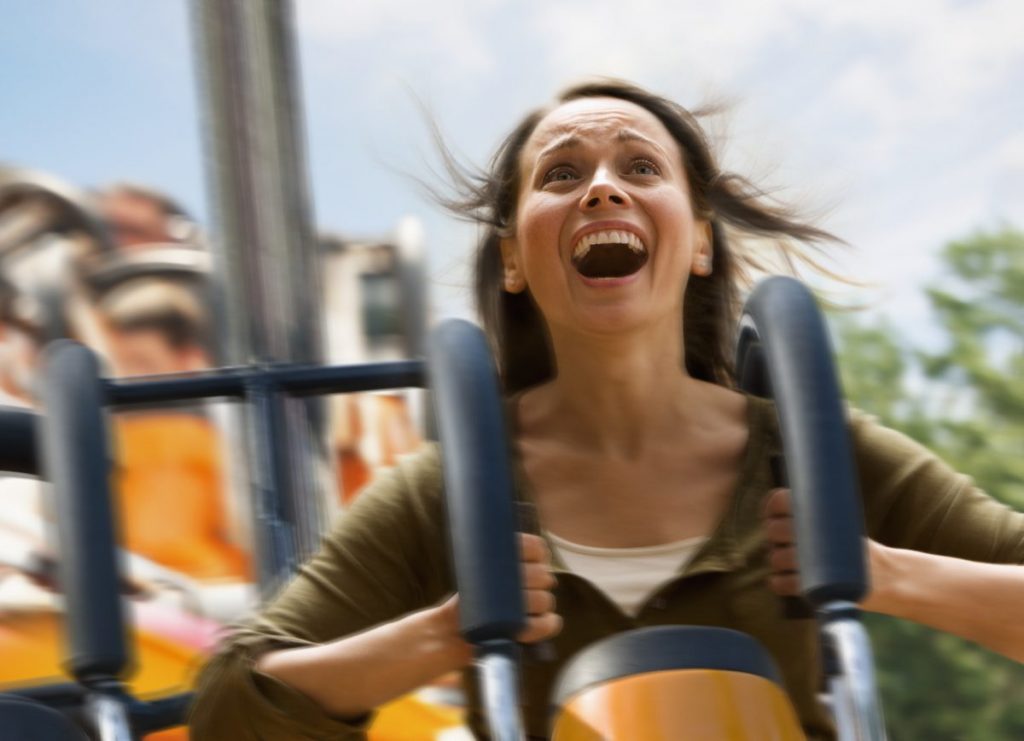 What’s a water park without splashtastic water slides? Six Flags Over Georgia’s water park, Hurricane Harbor, features Bonzai Pipelines, a series of corkscrew-style water slides that feature gushing water, enclosed tunnels, and plenty of twists and drops. With its 360-degree turns, Bonzai Pipelines has all the thrills of a roller coaster, but it can also cool you offer on a hot summer day at the park. 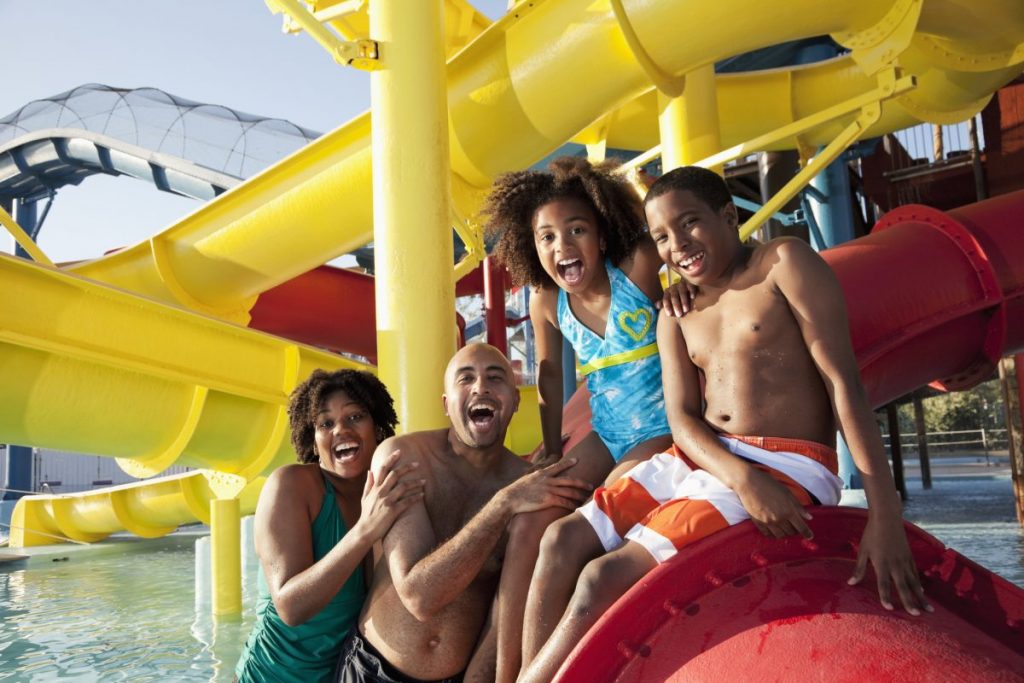 Rides and cotton candy aren’t the only attractions at Six Flags Over Georgia. The theme park is home to a myriad of shops where visitors can purchase souvenirs based on their favorite Looney Tunes or DC characters like plush toys, hats, and t-shirts. Some of the park’s most popular shopping venues feature caricature artists and antique-style photo opportunities for guests. From hand-crafted jewelry to old-time candy, the merchandise is diverse. The shops provide a chance for visitors to catch their breath after riding those heart-stopping roller coasters. 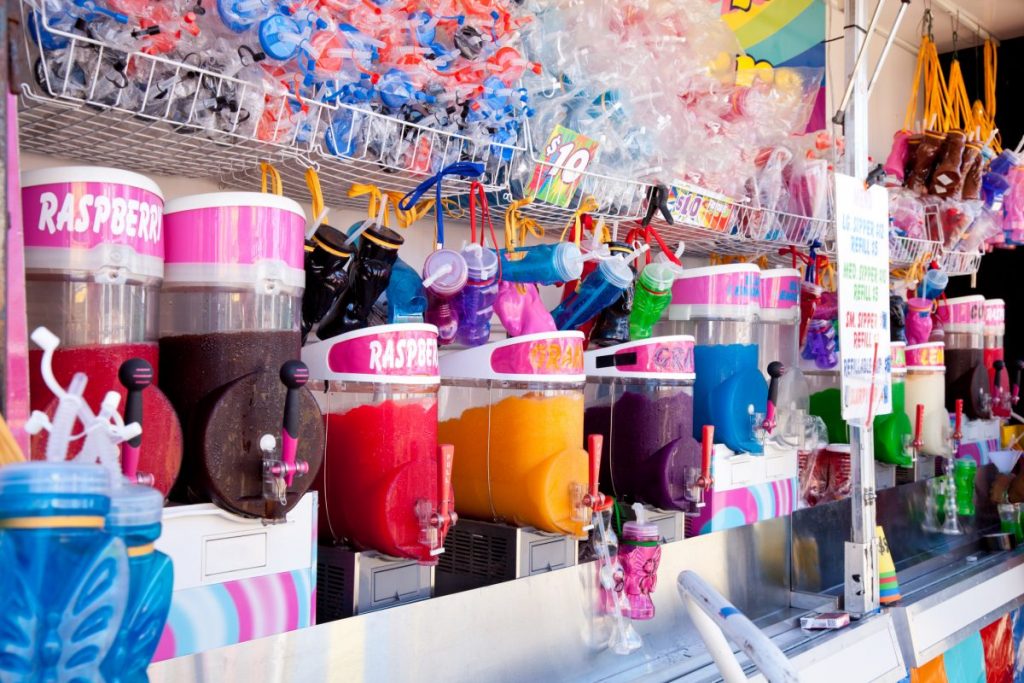 Located in an area of the theme park known as Carousel Hill, the Riverview Carousel dates to 1908 and is one of only three existing five-across antique carousels known to exist in the country. The Riverview Carousel is a unique park feature owing to its age. Young and old visitors alike flock to this attraction to enjoy riding and to witness its marvelous upkeep. 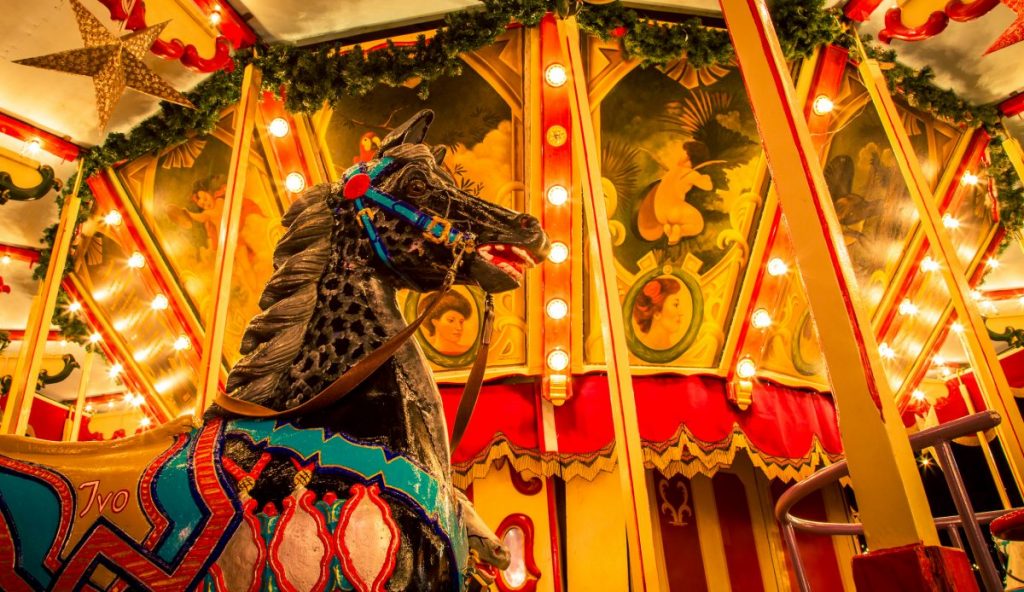