Once you have ticked off the Great American must-sees, the Statue of Liberty, Mount Rushmore, and the Grand Canyon, what's left to get excited about? Well, don't fear as the US is packed full of weird and wonderful roadside attractions. People decided to make giant food-themed monuments to local specialties to get people to pull over on long road trips. For fans of weird American culture, there are shrines to food along all the big highways. A brief spot certainly livens up a dull drive.

Cured on July the 7th, 1902, the oldest world's ham is said to be still edible. But don't try and take a bite out of it - the museum staff won't appreciate it, and the ham will likely be rather tough to chew. Owned by Gwaltney Foods, the ham was lost in storage then rediscovered twenty years later. Pembroke Gwaltney Jr. took the ham to expositions to prove how effective their curing was. Jr called it his Pet Ham and made a brass collar for it. Kept in a roadside museum in Smithfield, Virginia, the ham has something of a cult following. The ham has its own Twitter account, and there's even a live-streaming ham-cam so you can keep up with whatever 100-year-old hams do all day.

Florida is famous for its oranges, and the best orange-related produces are showcased in this huge orange-shaped shop in Kissimmee, Florida. Orange World is a family-run business. They built the World's largest orange as a way to advertise their shop in 1984. As well as fresh oranges and other citrus fruits, Orange World sells local honey, jellies, marmalade, gift baskets and more. It's fair to say the owners of Orange World are a little obsessed with all things citrus so if that's your thing too this is well worth a stop to explore. 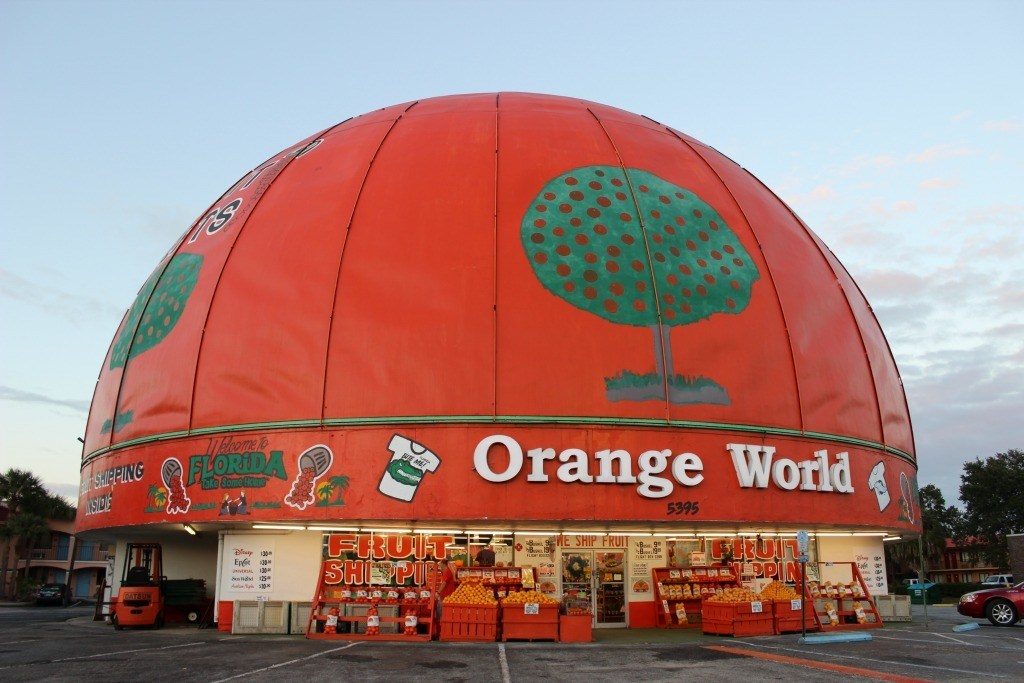 The Moorish-style building in South Dakota is decorated with corn. More than just decorated - there's corn art on every part of the building. There are murals and art which change every year at a cost of over $130,000. More than just a road-side stop point, the Corn Palace also hosts concerts, exhibits, and sports events. First built in 1892, the Corn Palace was a huge advertisement to show people how fertile the local ground was and to encourage people to settle in South Dakota. Today, the palace is a cultural hub for the community where you can see live bands or the local sports teams play. 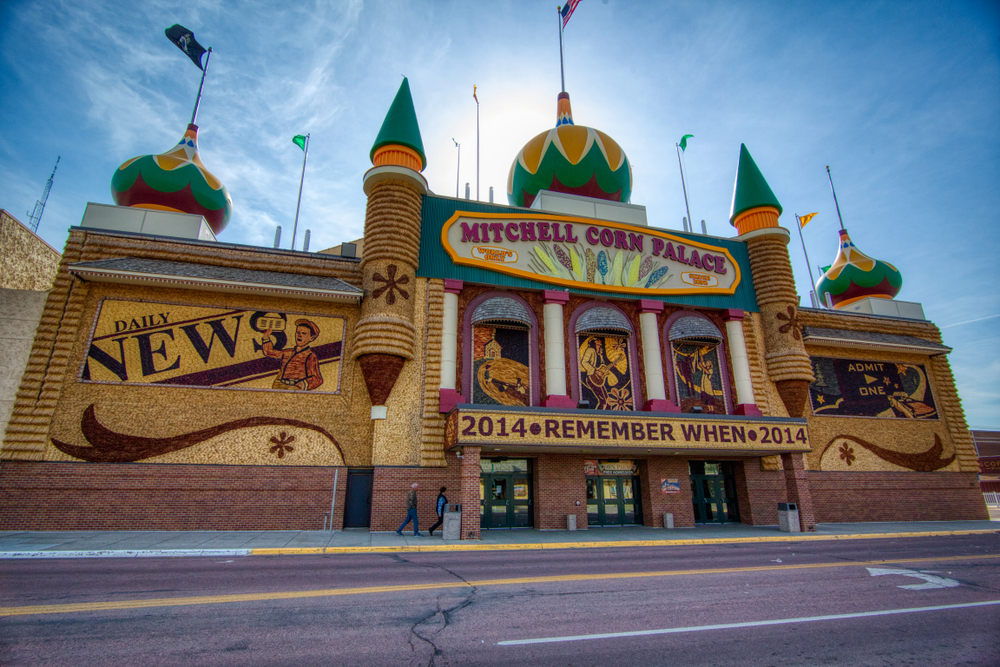 Giant Can Of Mushrooms, CO

In 1925, the water tower in Westminster, Colorado was painted to look like a can of Savery Savory Mushrooms. Once it advertised a local mushroom grouper and canning factory. Now, the factory is gone, but the giant mushroom can remains. There's not much on the roadside to keep your attention. But as a place to pull over and stretch your legs, underneath a huge mushroom can is as good as anywhere. Savery opened his first mushroom farm in downtown Denver. However, he had to move it to Westminster because the people of Denver hated the smell of the mushroom farm... and the horse poop mushrooms grow on! 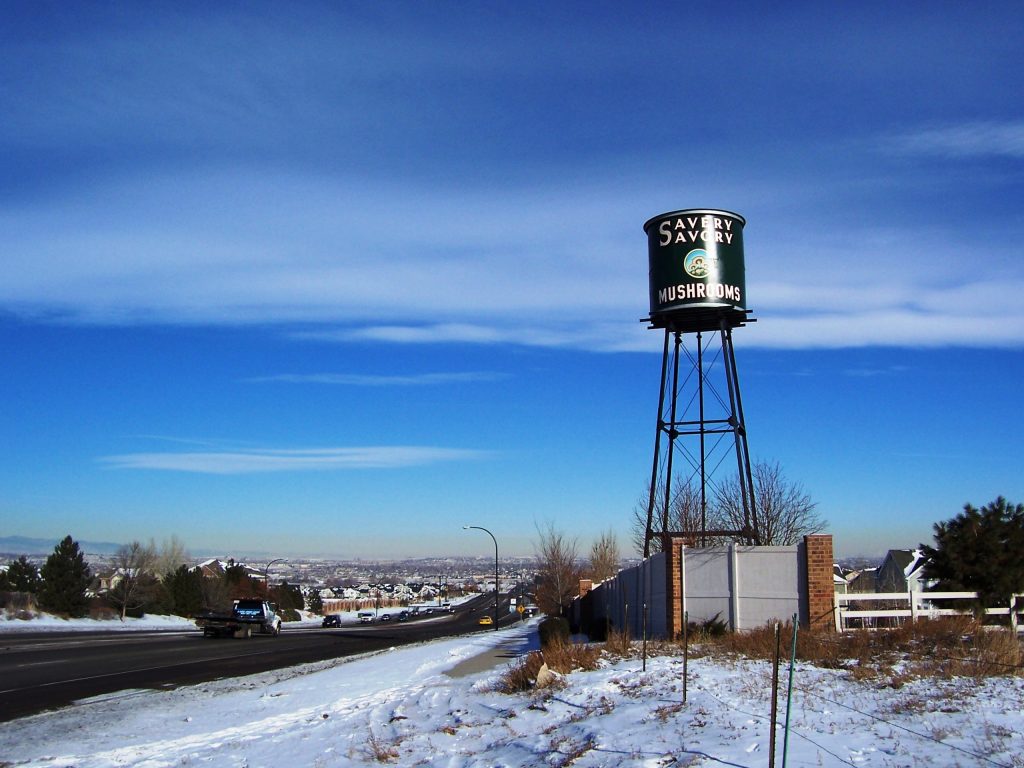 Several peanuts claim to be the world's largest, but the crown belonged to the monument on Interstate 75 in Ashburn, Georgia for the longest time. Unfortunately, Hurricane Michael toppled the peanut from its pedestal. At the moment the brick tower and plaque stand without the giant peanut. Apparently, there are still pieces of the nut monument on the ground. Replacements are being discussed, but until a new peanut sits atop the marker, there are a few local eateries nearby which make this a useful rest point. Here's hoping the new giant peanut will be up soon. 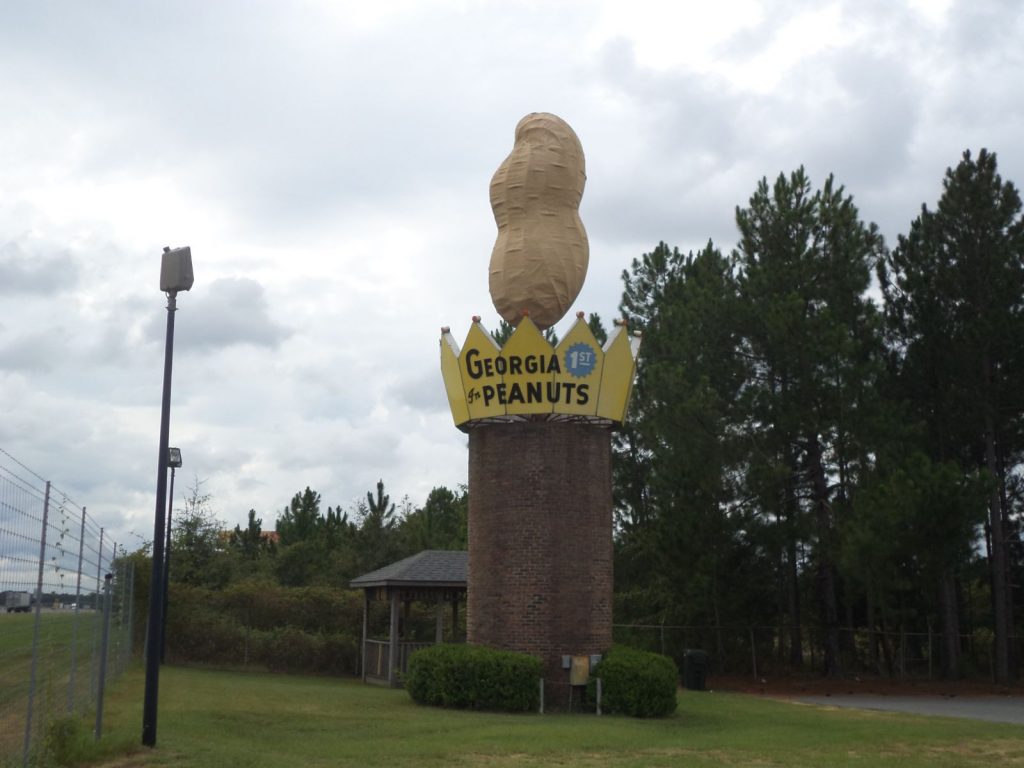 There are a surprising number of peanuts claiming to be the world's largest. According to the internet, the current World's Largest Peanut is in Plains, Georgia, and it has an eventful history. The 12-foot peanut sporting a broad, toothy grin was made to honor former President Jimmy Carter. The chicken wire and plaster creation was once part of a parade for President Carter and put on display in various places around town. After repairs when the peanut model was dented after being hit by a car, the peanut found its forever home. Today, a visit to Plains (population 734) is incomplete without posing for a photo with the happy nut. 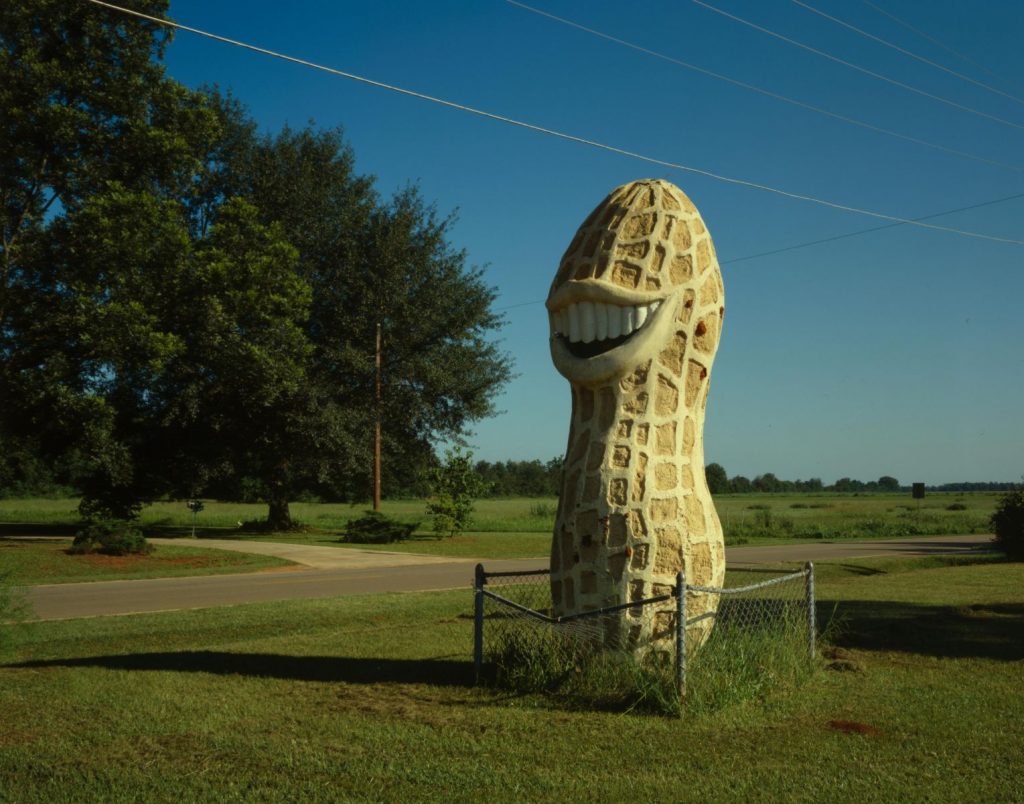 Standing next to Route 159, the world's largest bottle of Catsup has been a local landmark for over 60 years. With its own fan club, the huge Catsup bottle has many dedicated people who take care of this monument to the Brooks company's tangy sauce. The giant bottle could hold a staggering 100,000 gallons of Catsup. Although the fan club keeps their lips sealed as to whether the bottle is really filled with sauce. The Catsup Bottle Festival is a starting point for road trips along Route 66. During the festival, there are games, activities, and souvenirs at the big bottle. While the festival is on can get yourself a passport to stamp at each attraction on Route 66. 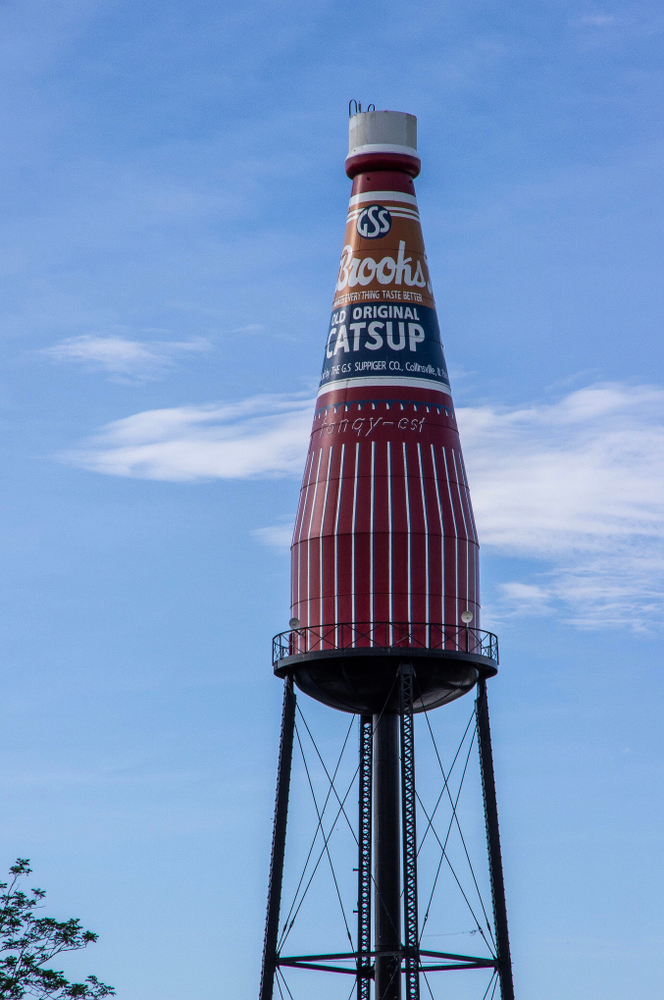 The world's largest Pecan is on display in Seguin, Texas. Made from chicken wire and fiberglass, the current nut was built in 2011 to replace the original when a competitor made a bigger pecan. At 16 feet (5 meters) long, the Texas town is likely to keep the record-breaking title for the foreseeable future. The world's largest nut is kept company by older models of big pecans, so you can also see the first, third, and the fourth largest pecans in the world. Today, the giant model pecan sits beside the Texas Agricultural and Heritage Center. Everything really is bigger in Texas! 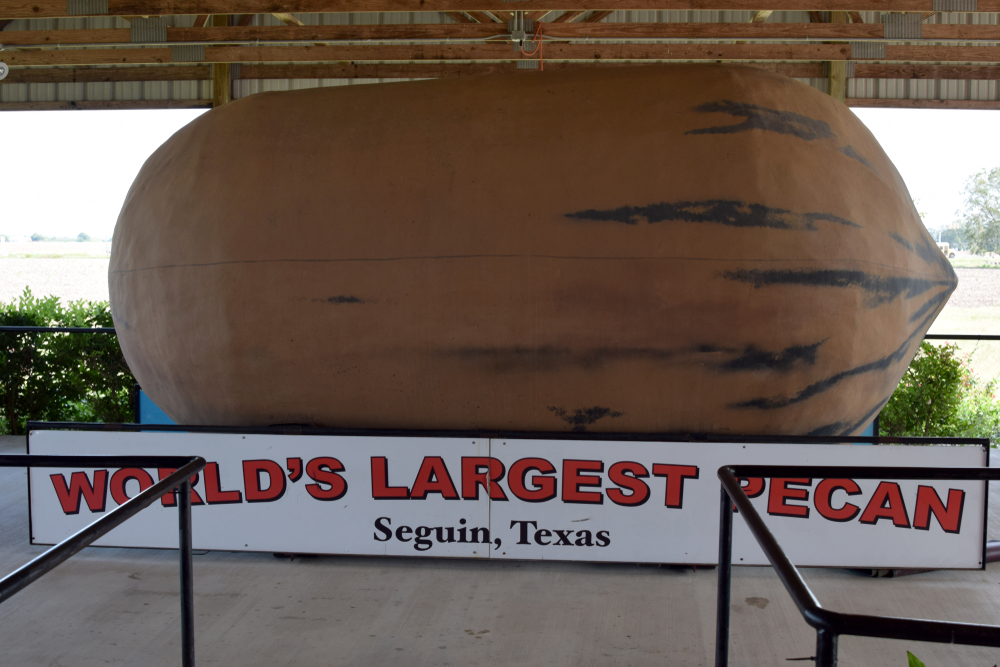 Hard to miss due to the giant green artichoke outside, you can also spot this restaurant by the queues of people eager to get some of the delicious food. This restaurant is popular with locals and visitors driving to the San Francisco Bay Area. Deep-friend artichoke hearts are a firm favorite, but there are also fresh artichokes, artichoke-shaped cupcakes, artichoke tea... basically if you can imagine it - there's an artichoke version on sale here. 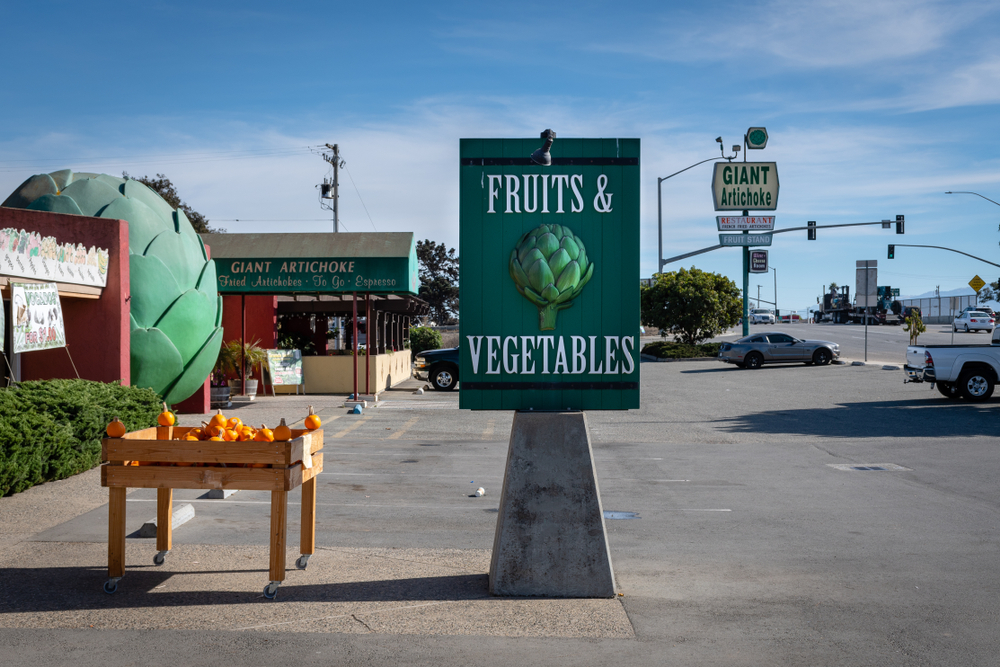 Corndogs were invented in Rockaway Beach, so it's fitting that the home of the street snack is also where you'll find the biggest corndog in the world. George Boyington invented the idea of cooking a bun with a hot dog inside, so that rain couldn't ruin his buns. At the Pronto Pup restaurant, you can try a variety of corndog flavors or ride a huge mechanical corndog. Don't try and ride the World's Largest Corndog - that's just for show and sits on top of the store. 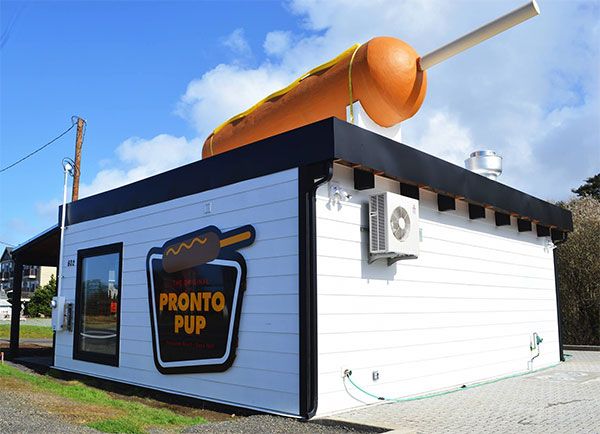 The owners of Wild Blueberry Land are passionate about their work. The husband and wife team have a background in farming, cooking, and environment preservation. So although the giant blueberry-shaped shop is the first thing you'll notice about this little farm, the quality of the blueberries is exceptional. Wild Blueberry Land has fresh blueberries, home-baked pies, jellies, as well as local Maine crafts for you to try and buy. The farm site is called Wild Wescogus Berries. Wescogus is a Passamaquoddy name for above the water, and you can see why as the farm overlooks Pleasant River which is a beautiful place to sit and enjoy the view. 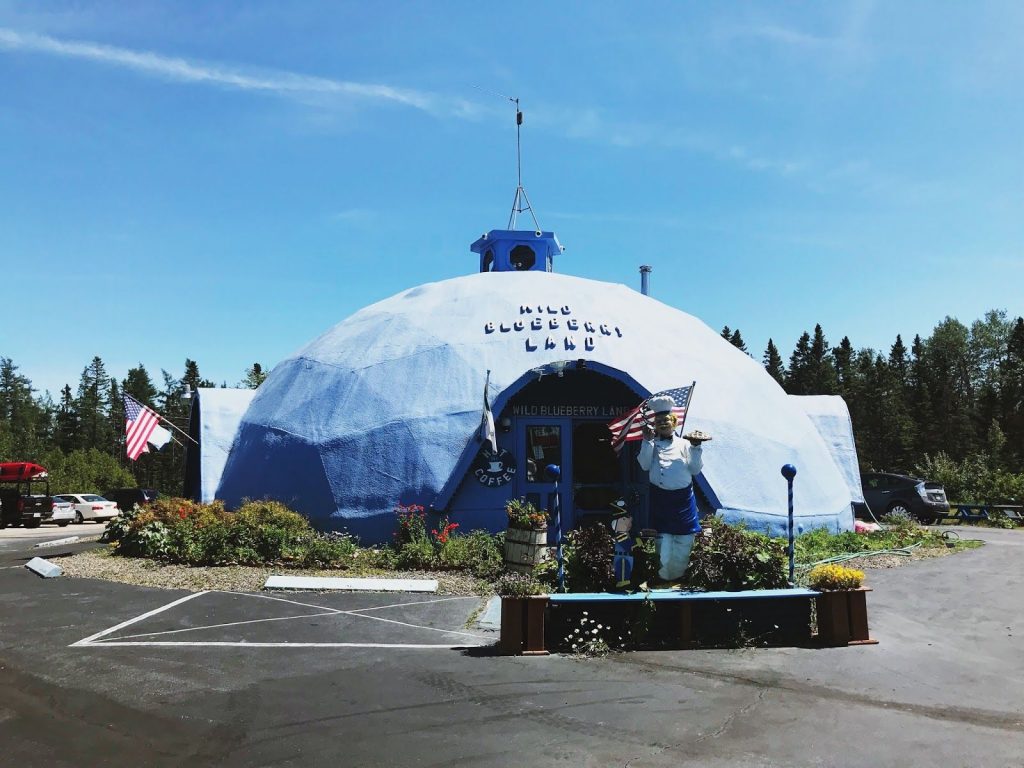 Penn Yan Village, in New York's Lake region, once cooked the world's largest pancake in September of 1987. The record flipping pancake weight 4,050 pounds and was later scoffed by impressed locals. Sadly, the biggest pancake record now belongs to Manchester, UK but the griddle that baked the original is still on display for you to marvel at. At 22 feet across, the steel pan is an intriguing talking point. Just how much maple syrup would you need for a pancake that big? 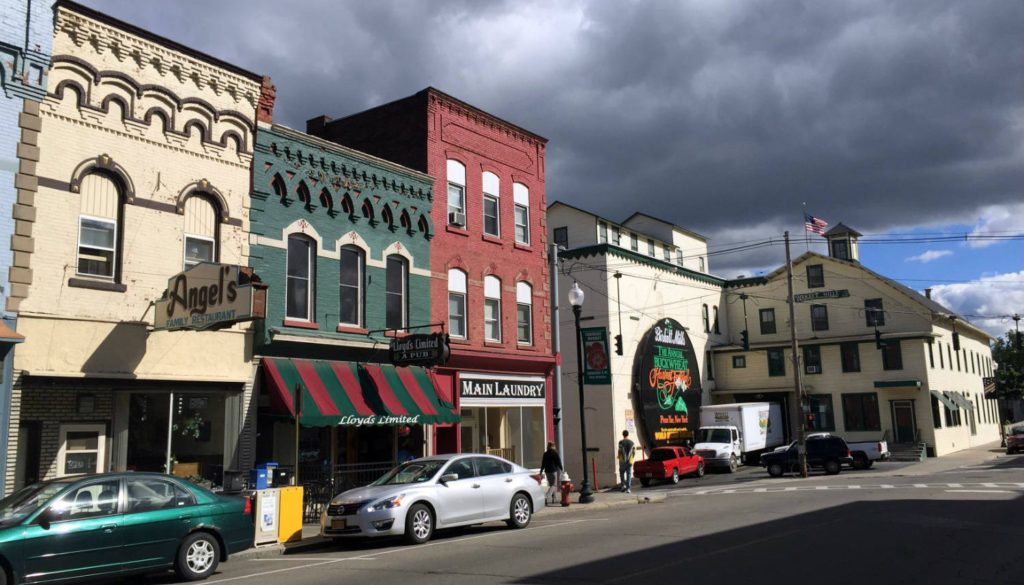 Moving away from The World's Biggest attractions, and there are so many more of them, the Spoonbridge and Cherry is the centerpiece sculpture in Minneapolis Sculpture Garden. Designed by a husband and wife team, it's literally a huge spoon with a juicy red cherry suspended above. In summer the cherry is a fountain, with water splashing onto the silver colored spoon. In winter the sculpture takes on new wonder as snow piles up making the sculpture looks like a massive ice cream sundae. It looks delicious, and it's cultural too, food for the body and soul. 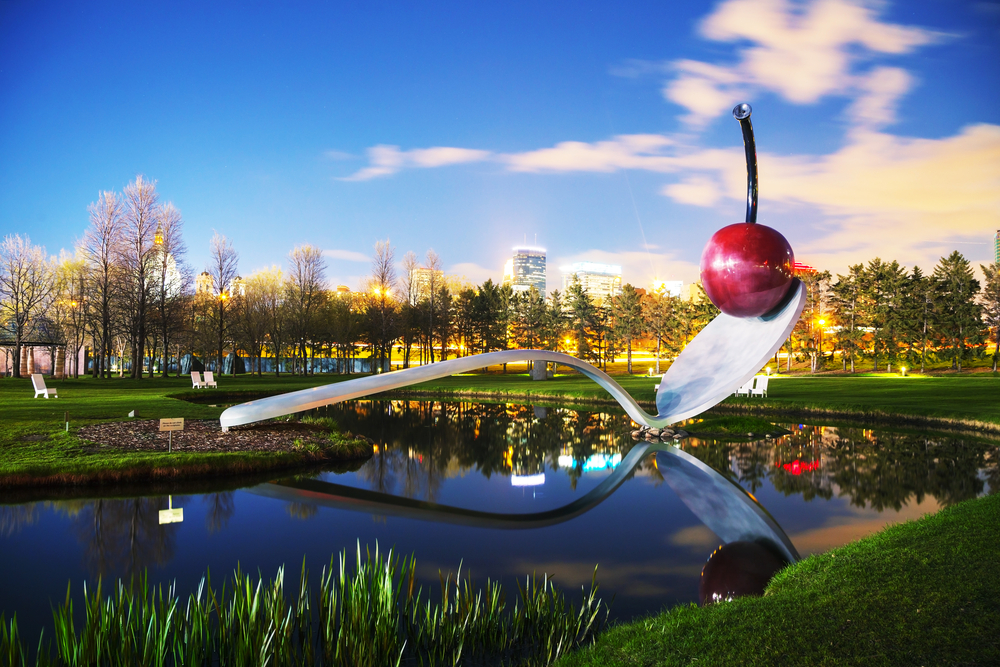 You may see this house built from beer cans as a great example of recycling or a shrine to the alcoholic beverage. Either way, the Beer Can House in Houston is an impressive site. The houses' owner, John Milkovisch, started adding his empty beer cans, caps, and bottles into concrete in the 1960s. Today, the house is managed by a charity who protect works of visionary art and unique imaginations. The Beer House certainly fits that description. If you visit, you can see just how much imagination Mr. Milkovisch used as you wonder at the patio, flower boxes, walls, roof, gates, and more all inlaid with beer items. 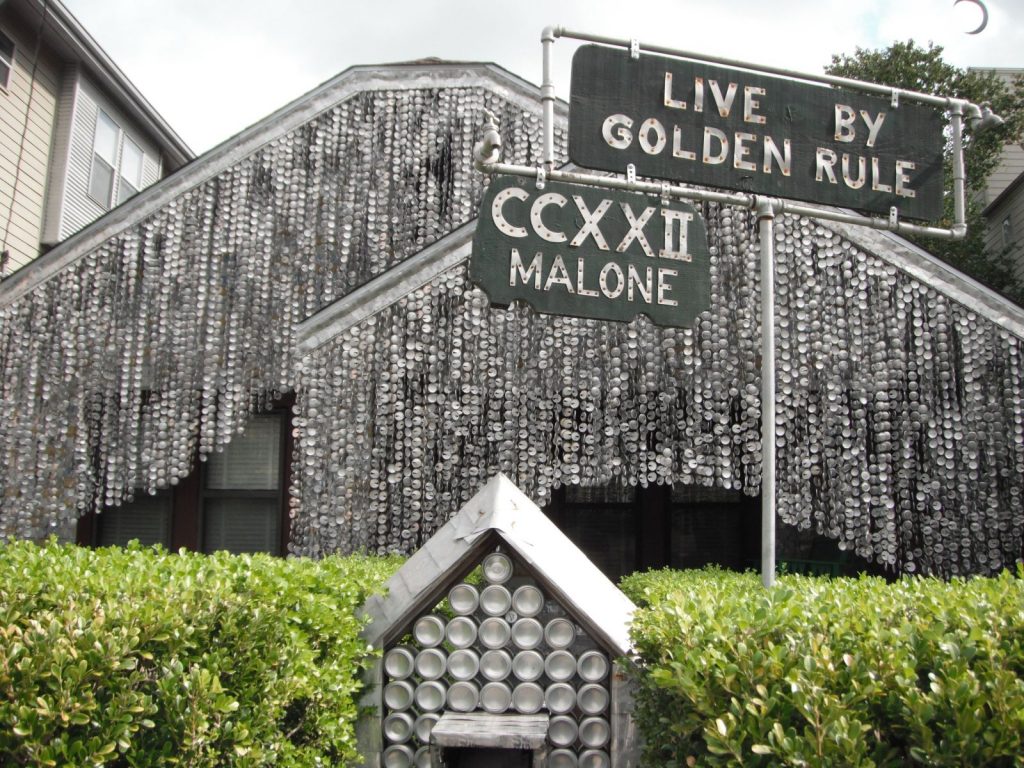 There is a musical dedicated to the canned meat, so why not a museum? Head over to Austin, Minnesota, and you too can enjoy an afternoon learning about SPAM. As admission is free, it won't cost you a thing. Although SPAM seems like the sort of product that gets forgotten at the back of your grannies cupboard, according to their website, 12.8 cans of the preserved meat are eaten every second. That's a lot of SPAM. 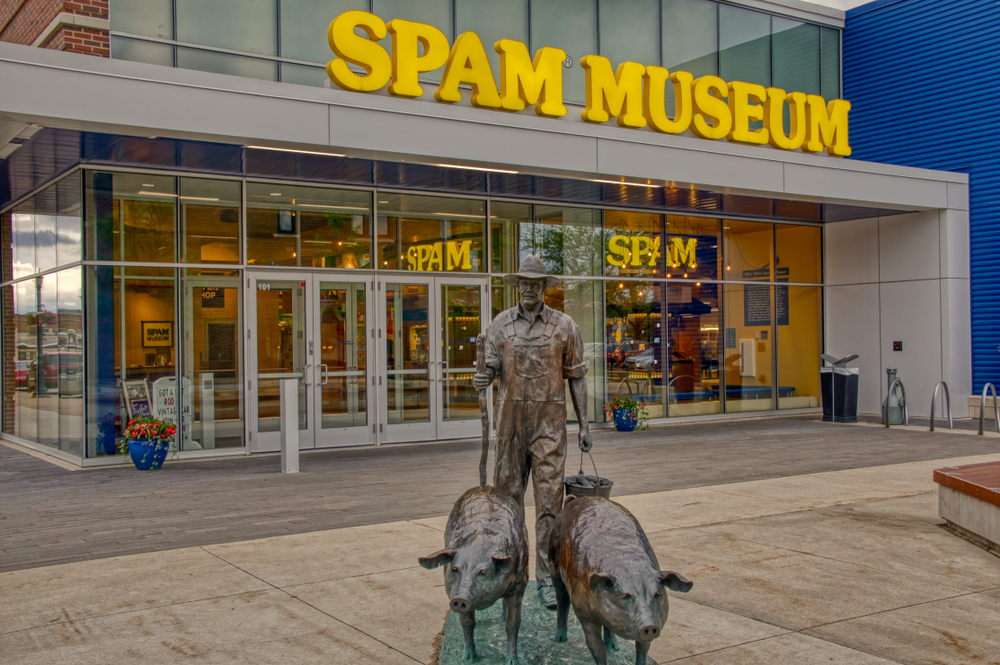 There is always room for a visit to the Jell-O Gallery. It's a little hard to tell if the museum takes itself seriously or not, but there is certainly a lot of facts about Jell-O here. For example, someone once tested Jell-O for signs of brain waves. To discover what they found, and why they spent their time on such a test, you'll have to go to the museum in Le Roy, NY and find out. 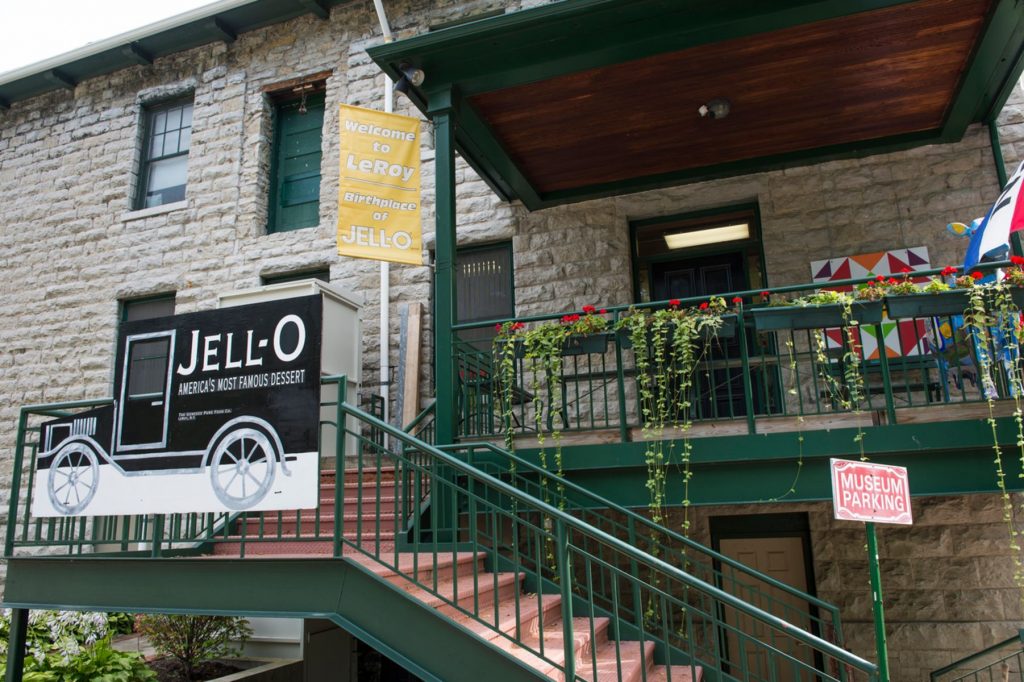 Free samples! Jelly Bean art gallery! Chocolate and wine tasting! Oh, and a 2.5-mile self-guided tour walk to burn off some of those calories. Open year-round, the Jelly Belly factory has a lot more to do and see that you might expect. Sure, there's the usual cafe and souvenir shop, but there's also a train tour, interactive games, and history to discover more about America's favorite bean. 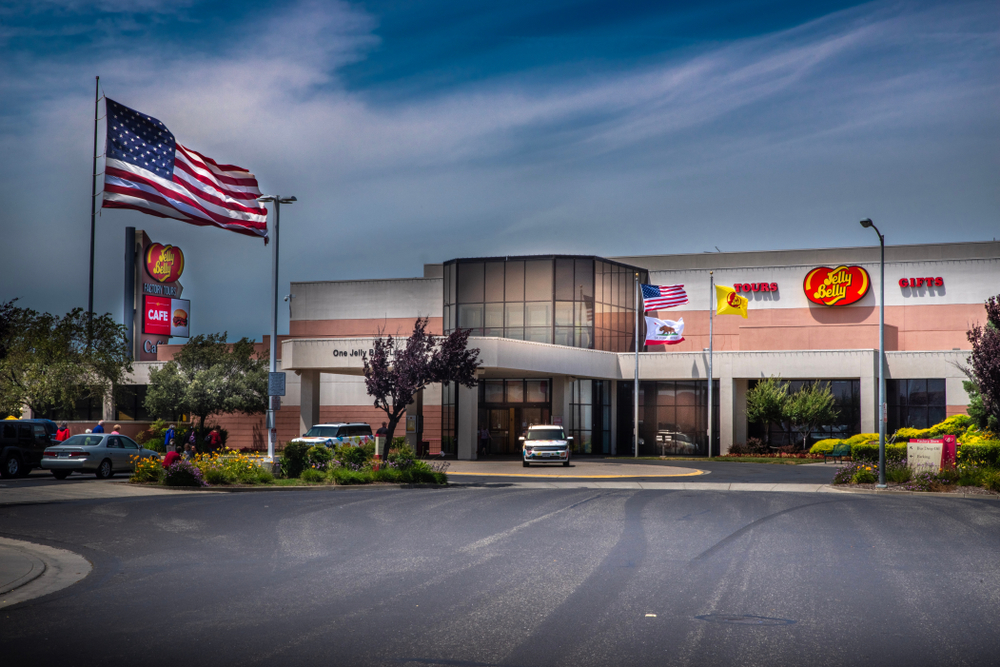 One of three museums on the site, the PEZ Memorabilia has a copy of every single different PEZ sold. For the dedicated PEZ enthusiasts among you, there's a VIP after-hours tour with samples to taste and an exclusive dispenser to take away. Rated one of the 50 best roadside attractions in the US, there's also a collection of classic toys and a museum of banned children's toys included with admission. How bad can child's toys be to get banned, you may think. You won't believe what people thought used to make a good toy for kids. 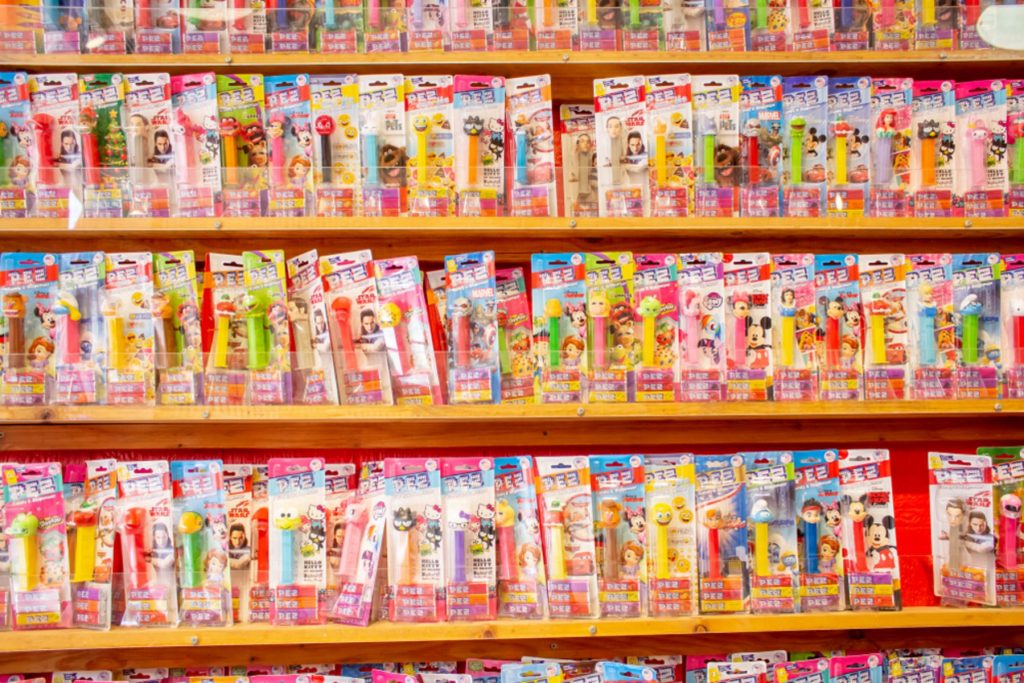 Here's a nice option if you like your food so fresh it's still on the tree. Fruit and Spice Park in Homestead, Florida is the only tropical botanical garden of its type in the US. Inside 37-acres of the Park grows 500 varieties of tropical fruit, spices, vegetables, nuts from all over the world. There are 150 different types of mango and 75 types of banana for a start. Best of all, visitors are encouraged to taste the ripe exotic edibles. 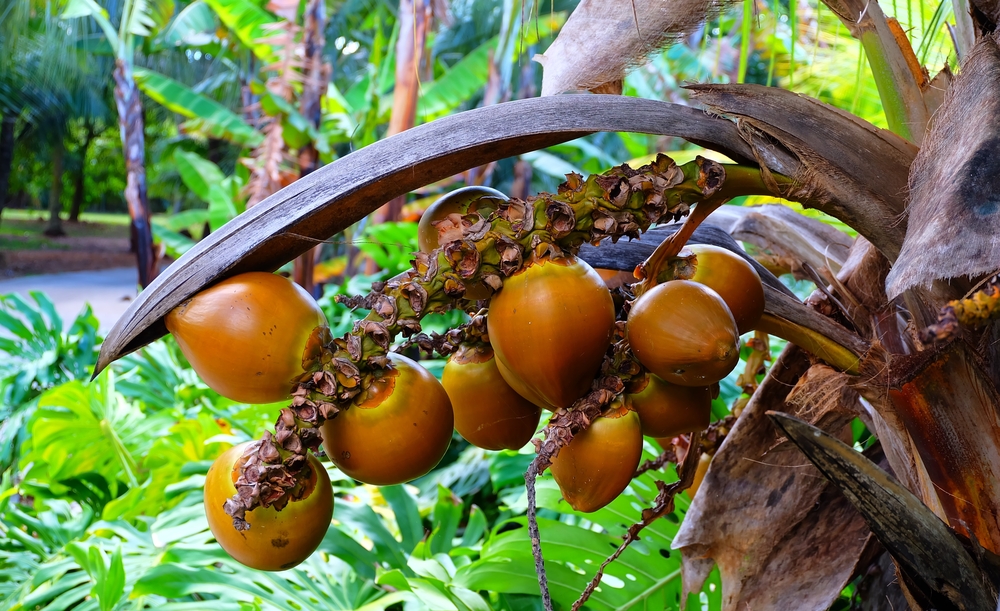