Cool Things to Do in Asheville, NC

Nestled among mountains and forests lies a charming and romantic city waiting to be discovered. There are plenty of things to do in Asheville, North Carolina, whether you're looking for a weekend retreat, an outdoor adventure or an immersive cultural experience.

Take a train and take in the scenery. Discover traditional craft work. Explore America's largest residence. Listen to the music of a banjo or a drum circle. Find your next favorite beer. Hike some of the East's highest mountains. Slide down a unique water slide. All this and more is available in delightful Asheville, North Carolina.

Forget all Your Cares when You're Downtown

Stroll through the vibrant city of Asheville to get a real sense of place and history. Hop on LaZoom, the bright purple buses to learn some interesting and unique facts about the city's founding. Other options include trolleys and an urban walking tour. Do some shopping at the open-air Grove Market. Check out the Friday night drum circle downtown, a long-time Asheville staple. Brave ghosts and ghouls on the Haunted Ashville tour, which deposits you in the basement of a Masonic temple. Stop into fabled independent bookstores Malaprops and the Captain's Bookshelf. 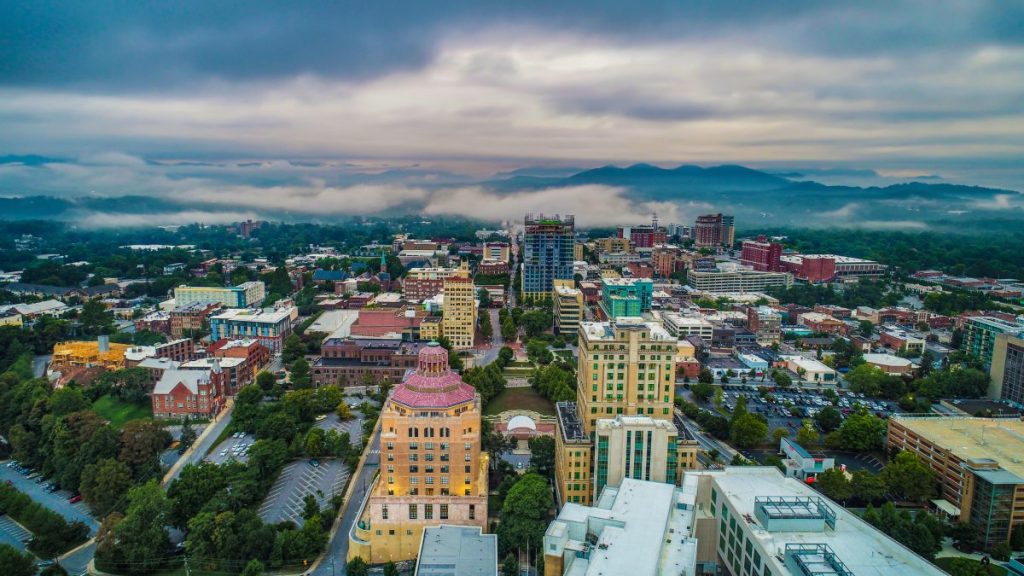 From the traditional to the obscure, Asheville hosts an array of museums, so everyone is sure to find something up their alley.

More unique options include the Museum of the Cherokee Indian, the Asheville Pinball Museum (yes, you can play pinball there), the Asheville Radio Museum, the Antique Car Museum at Grovewood Village, the Aluminum Christmas Tree Museum, and Wheels Through Time, a collection of rare vintage American motorcycles. 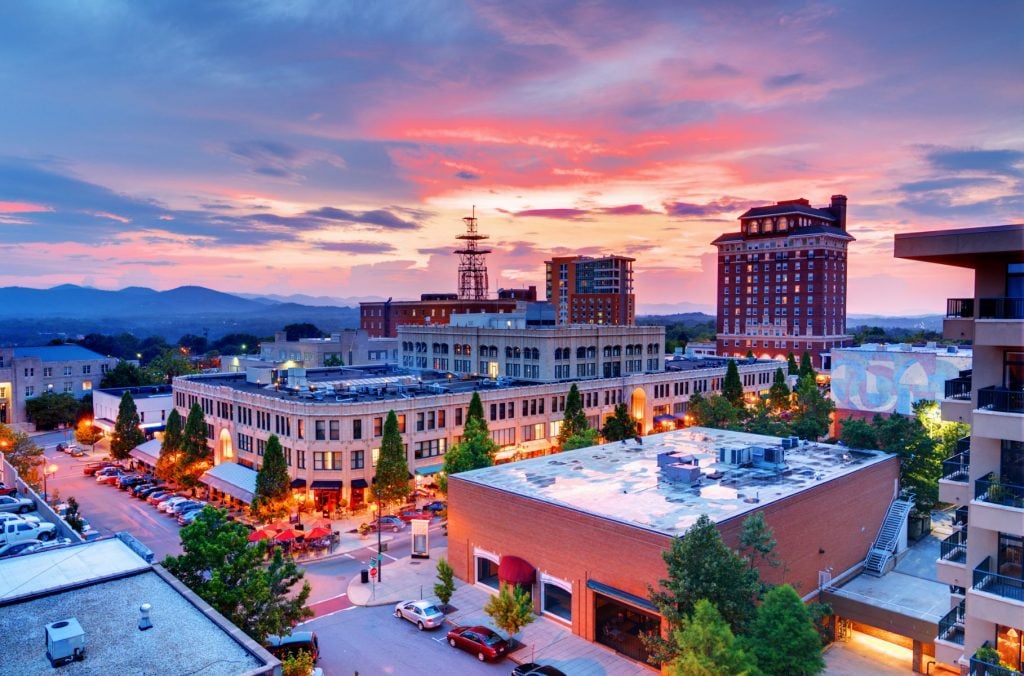 Just outside of Asheville is America's most visited National Park, the Great Smoky Mountain National Park, which spans both North Carolina and Tennessee. Discover what life was like in rural Appalachia by exploring rehabilitated log cabins, churches, schools, and mills. Grab your camera and photograph everything from wildflowers to elk and black bears. The best sites for wildlife viewing include Cataloochee and Cades Cove. Fishing, biking, and hiking are popular outdoor activities as well.

No visit to Asheville would be complete without a stop at "America's largest home," the famed Biltmore Estate. This iconic French Renaissance chateau was built in 1889 for George Vanderbilt II. Famed architect Richard Morris Hunt designed the 250 room mansion, and preeminent landscape architect Frederick Law Olmstead oversaw the grounds. Soak up the scenery today, and stroll past the famous Italian garden, the glass-roofed conservatory, and the boathouse. Or tour the home and try and find all 65 fireplaces while taking in the artwork of Renoir and John Singer Sargent. Marvel at the library's more than 10,000 volumes and be awestruck by the seven-story-high ceilings of the banquet hall. 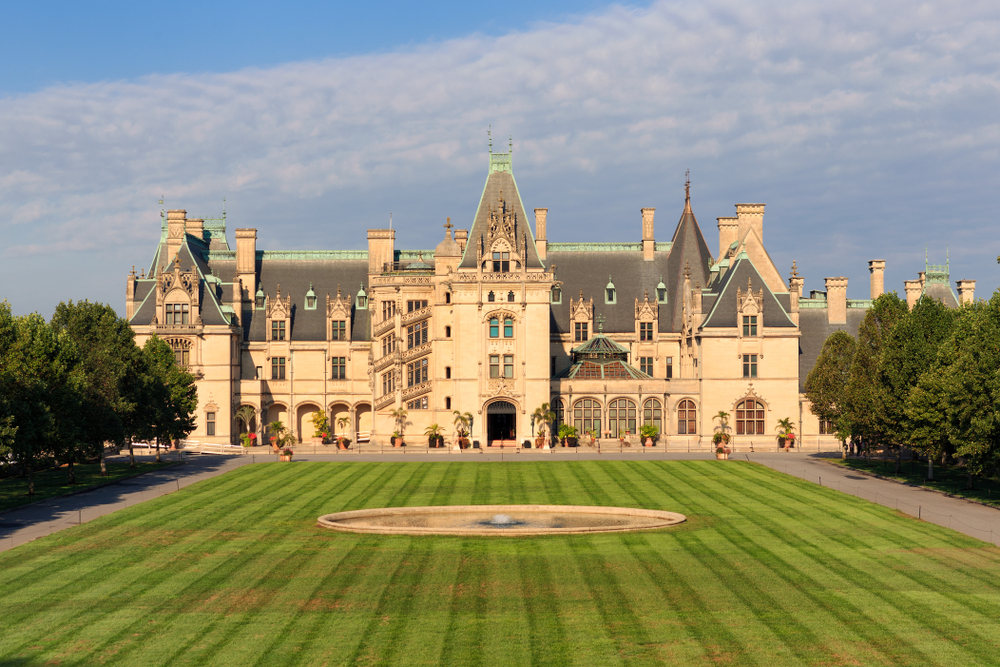 Land once belonging to the influential Vanderbilt family created Pisgah National Forest. Ten minutes from downtown Asheville, this historic wilderness was established in 1916, making it one of the first National Forests in the Eastern United States. It comprises approximately half a million acres of hardwood forest, along with some of the highest mountain peaks in the region. There are also several notable waterfalls, including Moore Cove Falls and Looking Glass Falls, both of which are easily accessible. Not to be missed is Sliding Rock Natural Waterslide, a 60-foot slide down smoothed rock. In addition to hiking trails, there are also several trails that accommodate mountain biking.

Pisgah was once home to the first forestry school in the US. The story of the school is interpreted at the Cradle of Forestry in America historic site. The North Carolina Arboretum is also located within Pisgah National Forest. 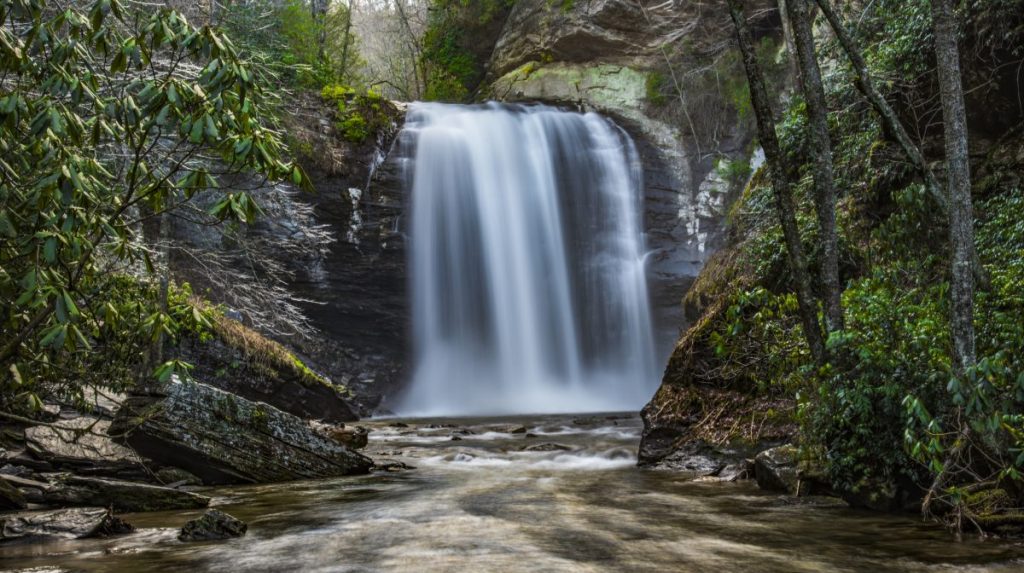 Known as "America's Favorite Ride," touring the North Carolina countryside via the Blue Ridge Parkway is a must for anyone visiting Asheville. The 469 miles of roadway connects Shenandoah National Park in Virginia with North Carolina's own Great Smoky Mountains National Park. The parkway is itself part of the National Park System, and offers plenty of stopping points for hiking, picnicking, or photographing the spectacular vistas. Make sure to stop at the visitor center at mile marker 382, just south of Asheville, to pick up maps and view the exhibits. You'll also want to stop at the Folk Art Center, which is home to the Southern Highland Craft Guild. You'll find artwork in three different galleries, as well as craft demonstrations.

As an alternative to driving, you can also take in the region's scenery via train. The Great Smoky Mountains Railroad offers train rides along the Nantahala and Tuckasegee rivers. These charming rides take you through the mountains and valleys, ducking in and out of tunnels along the way. There are open-air cars, climate-controlled cars, and even first class accommodations which include dining. For children, there are special Christmas, Easter and Halloween options.

The Craggy Mountain Line also offers train tours, as well as old-fashioned trolley tours and a train museum. During Christmas, your family can have hot chocolate and cookies with Santa and Mrs. Claus on the Jingle Bell Trolley Train Ride. 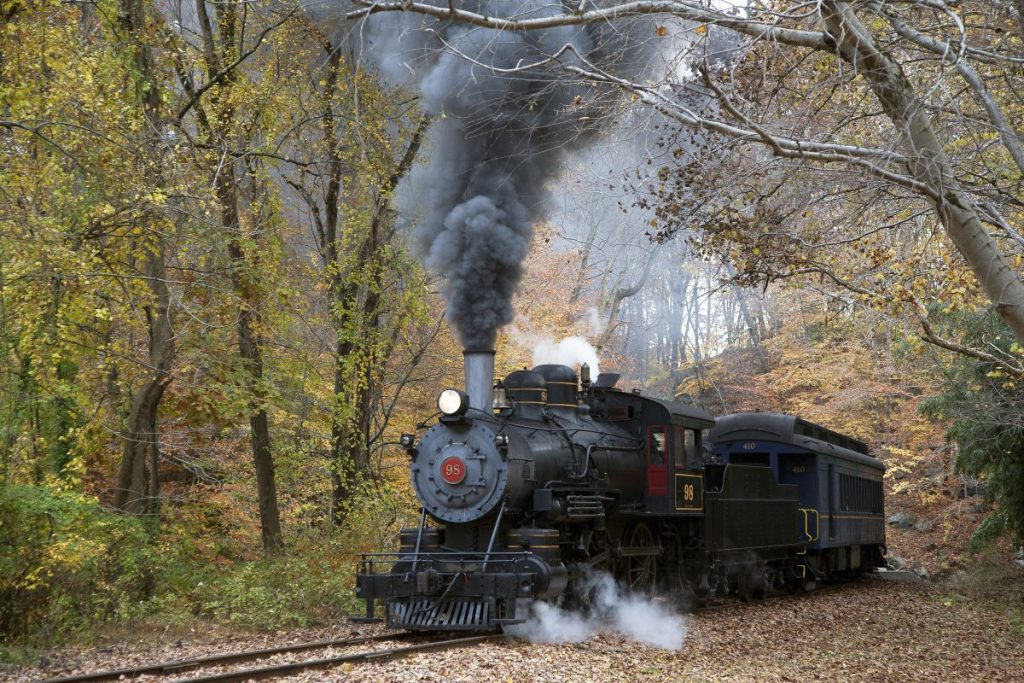 Just south of downtown Asheville is a portion of town undergoing a rapid transformation. It's also gaining a reputation as Asheville's brewing district because there are close to a dozen breweries either already open or currently in the works. Funkatorium boasts an old-world Belgian-style tasting room, while Green Man Brewery focuses on traditional English style. Don't forget to check out The Chemist, a craft distillery that's a throwback to the Prohibition era.

You can also check out the breweries by signing up for a Brews Cruise or via a pubcycle, a pedal-driven trolley that takes you around the city.

No worries though, there's more to do in South Slope than just grab some beers. It's also home to art galleries like ZaPow and the Tracey Morgan Gallery. The former industrial and warehouse district now hosts shops and restaurants as well, like Buxton Hall, known for its barbecue and excellent pies. 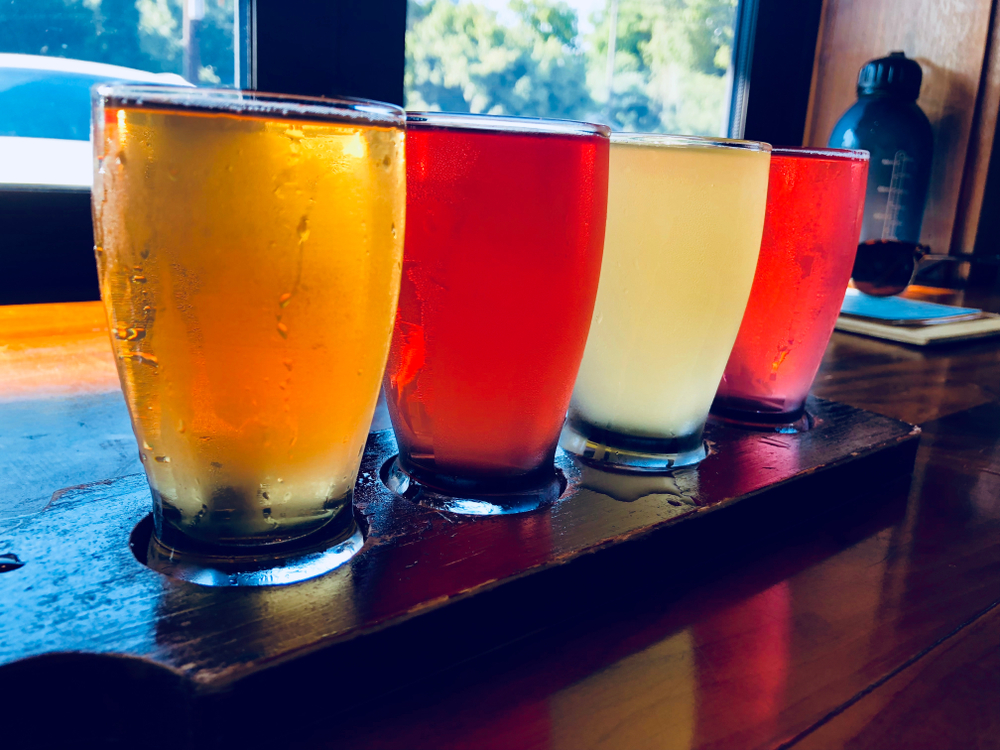 If traditional restaurants aren't going to satisfy your cravings, Asheville offers some interesting alternatives. Take a tour and learn about the small-scale farming of Appalachia. You'll visit community-supported agricultural sites like farmer's markets and homesteads. Check out East Fork Farm, where you'll find grass-fed lamb and beef, fresh eggs and even rainbow trout. Feeling adventurous? Sign up for a guided foraging excursion. Rated a "best travel experience" by Southern Living, this unique adventure will teach you how to identify and prepare food you can find in the great outdoors. Explore the Western North Carolina cheese trail. Some of the award-winning cheeses from the Williams Sonoma catalog are produced at nearby Looking Glass Creamery. Rocky Mountain Creamery is known for its goat cheese, while Blue Ridge Mountain Creamery produces a variety of European-style cheeses. Find even more cheese at the Carolina Mountain Cheese Fest, held each April. 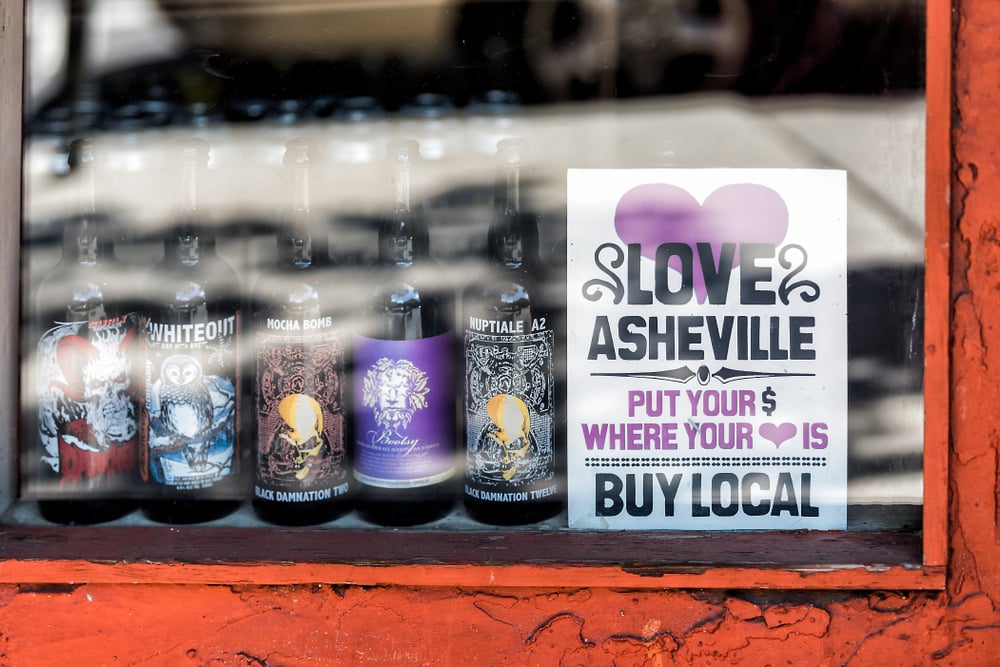 Heralded as one of America's best cities for music, Asheville offers tons of spots to hear great music. While much of it has its roots in mountain music, you'll still find plenty of other sounds too.

A multitude of music festivals pepper the calendar, with Mayfest, the LEAF Festival, and Downtown After 5 being the most popular. Music is also an essential part of other events, like the Fins and Gills Classic fishing tournament and the Asheville Food Truck Showdown.

Check out some of Asheville's historic music venues, like The Orange Peel. Formerly an RnB club, it now hosts acts as varied as Bob Dylan and The Black Keys. The Grey Eagle's influence on Ashville's music scene helped launch the area's indie rock culture and can be counted on to feature up-and-coming musicians. 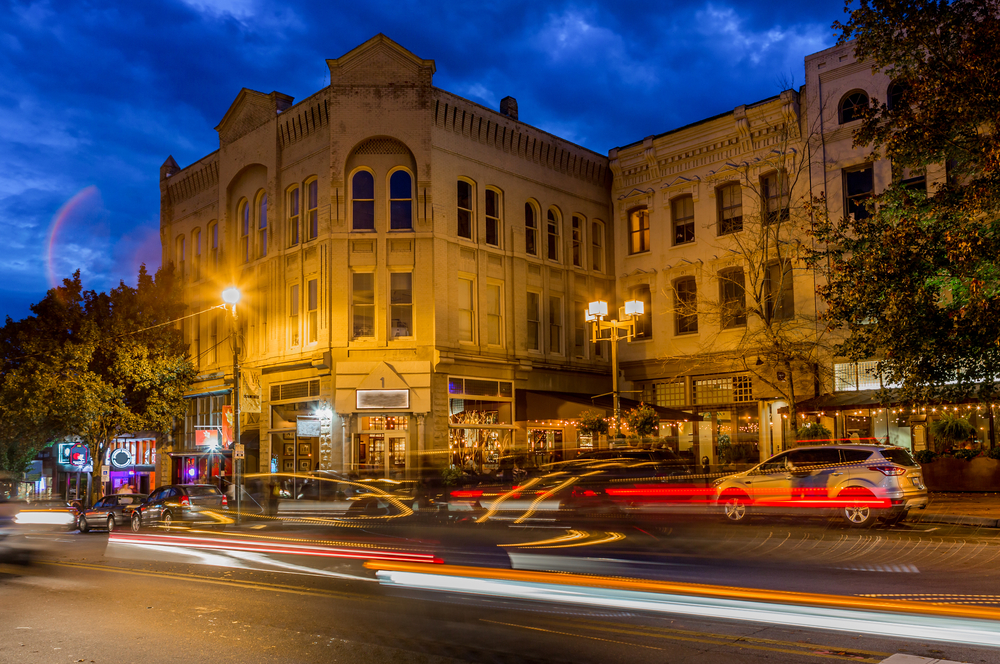