Unusual Things to Do in Cambodia

Cambodia has become known as the “Kingdom of Wonder,” and it’s easy to see why. The stunning landscape is diverse with lakes, rivers, mountains and lush tropical forests. On the coast are some of the most beautiful and idyllic beaches in the world. Cambodia’s rich history is evident in the thousands of temples scattered throughout the country. No visit is complete without seeing Angkor Wat, the most famous temple complex of all. But if you are a traveler who likes to get off the beaten track, Cambodia offers an array of hidden gems for you to explore.

If you have seen Tomb Raider than you will recognize Ta Prohm. It’s the only temple complex in the Angkor region virtually left untouched since discovery. Massive roots of strangler figs and silk-cotton trees wind through the structure creating an awe-inspiring merger between nature and architecture. As well as exploring the labyrinth of corridors, nooks, and crannies, be sure to check out the dinosaur carving in a quiet corner of the complex. It’s believed that Ta Prohm construction began in the 12th century. Does the carving tell us that the dinosaurs lived more recently than previously thought? It’s not just Lara Croft who gets to solve mysteries of the past! 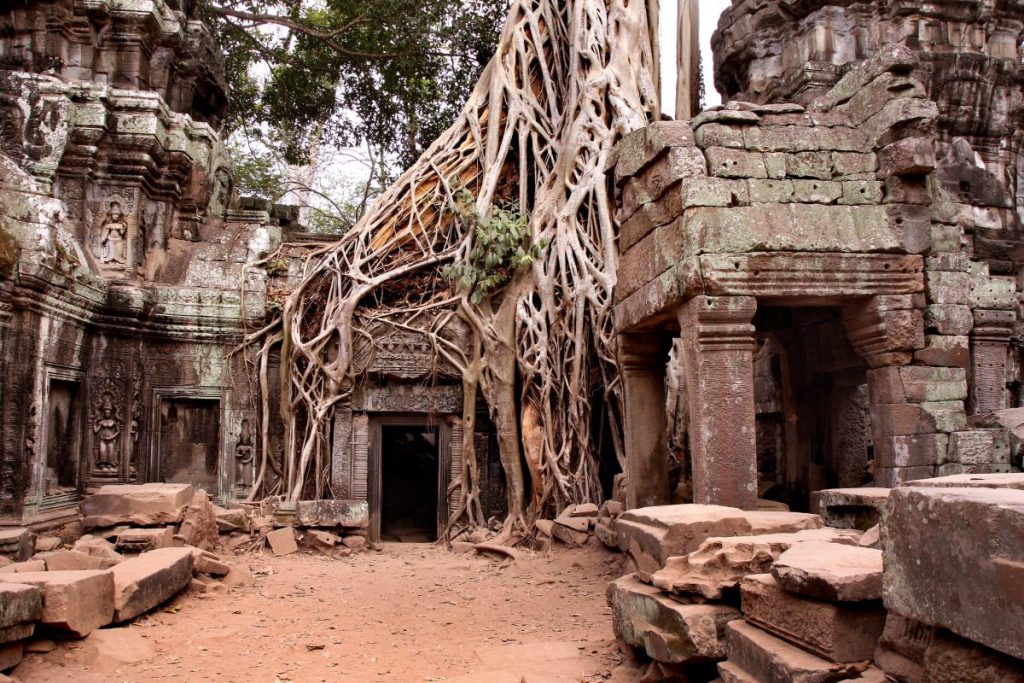 Phnom Sampeau’s Killing Caves are a thing of beauty that witnessed unspeakable atrocities. At the top of the cave is a natural skylight. The Khmer Rouge would line people up, bludgeoned them and let their bodies fall into the chasm below. Today, a huge gold reclining Buddha overlooks shrines containing the remains of men, women, and children who lost their lives. The pilgrimage to the Killing Caves is a truly humbling experience that puts life into perspective. 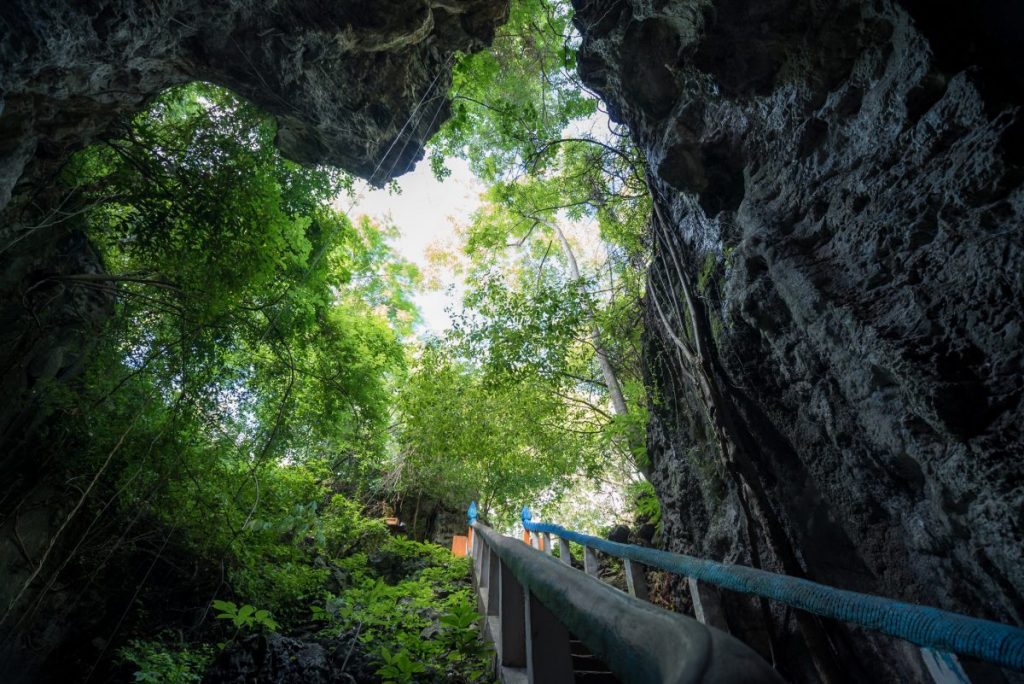 After visiting the Killing Caves, it's a short walk to another jaw-dropping sight. As the sun sets, witness the amazing spectacle of millions of bats emerge from the Battambang cave network. The sheer size of the bat population means that the mass exodus can last for 30 or 40 minutes. It’s incredible watching the small black animals appear to paint the sky. You can choose to view the bat spectacular from a safe distance. But if you are feeling adventurous, hire a local guide to take you to the mouth of the cave. Somehow the bats avoid touching you as they rush past. The whole experience is a pure adrenaline rush. 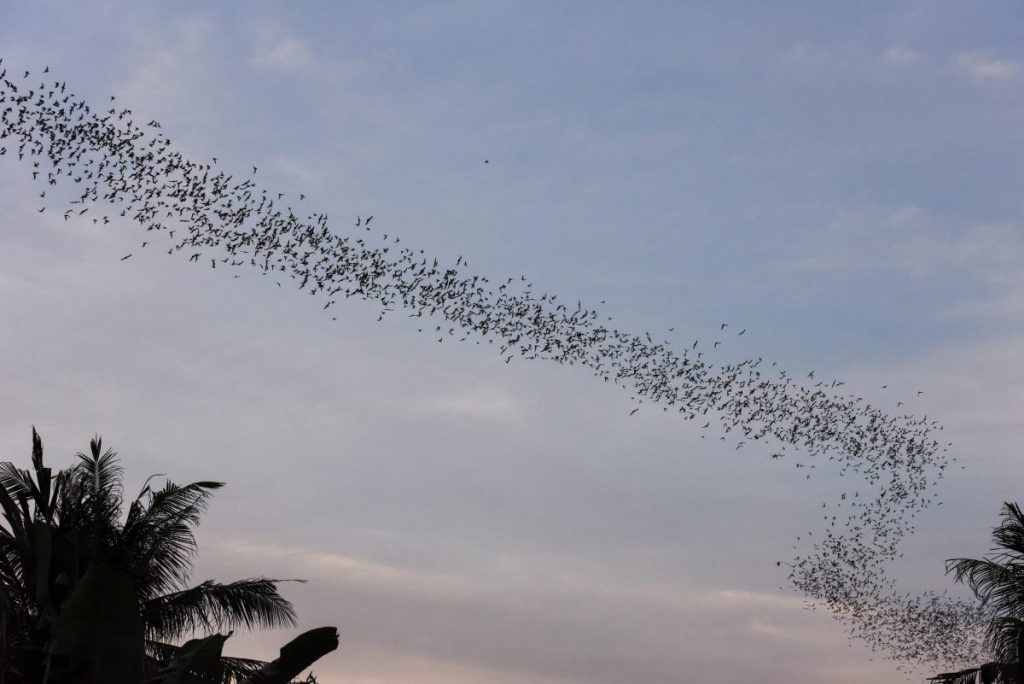 If you are looking for a slightly different mode of transport to see Cambodia, try traveling by "norry," the Bamboo Train. Cambodian railway was always in a sorry state. Few trains ran. Tracks were missing or warped. Eventually, services stopped completely. This made way for the bamboo train as a way to transport passengers, livestock and produce between small villages. A metal undercarriage supports a queen-sized platform which is then placed on wheels. It's not the most comfortable way to travel. But moving along at 30 miles per hour with some chickens and local Cambodians, it's a fun journey to take. 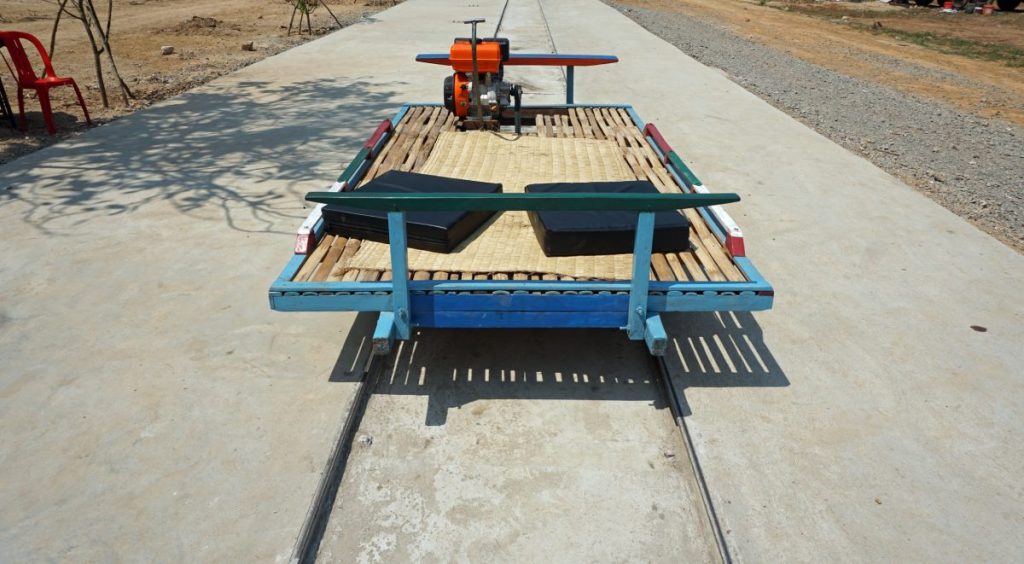 In Cambodia’s capital city, Phnom Penh, a former school houses Tuol Sleng Genocide Museum. Under the Khmer Rouge, this high-school became a high-security prison. Inmates faced terrible conditions. They were shackled, forbidden to speak with each other and received constant beatings and torture. Prisoners often underwent water-boarding, electric shocks and were burnt with hot irons. Today the prison is a monument to the brutality suffered by the Cambodian people. Former cells and torture chambers are lined with thousands of photos of those who met there end within their walls. A map of Cambodia has been created entirely from human skulls. Tuol Sleng will provide you with some understanding of Cambodia’s gruesome history. 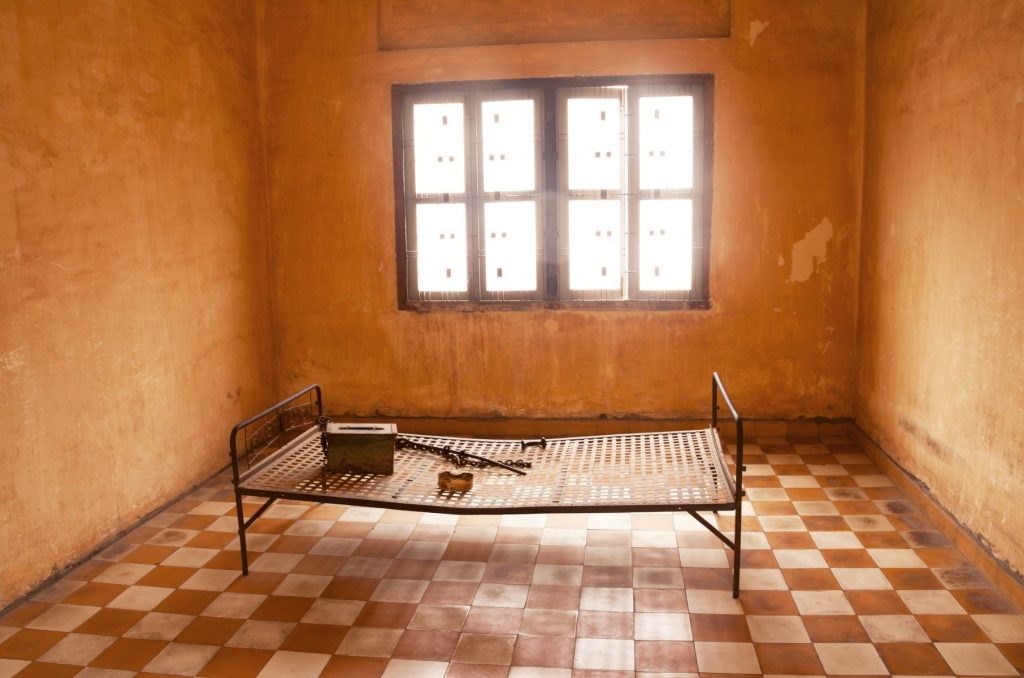 Yeak Laom lake is an almost perfect circle formed by a volcanic eruption. Crystal clear water surrounded by lush green forest. During and after the rainy season, butterflies and exotic birds make Yeak Laom their home. Tracks and wooden planks circle the shoreline connecting five small villages. While walking around the lake, take a break with a quick dip in the refreshing water. To protect the picturesque Yeak Laom, the state has banned the use of detergents along with the more bizarre rules of no gambling or having arguments! 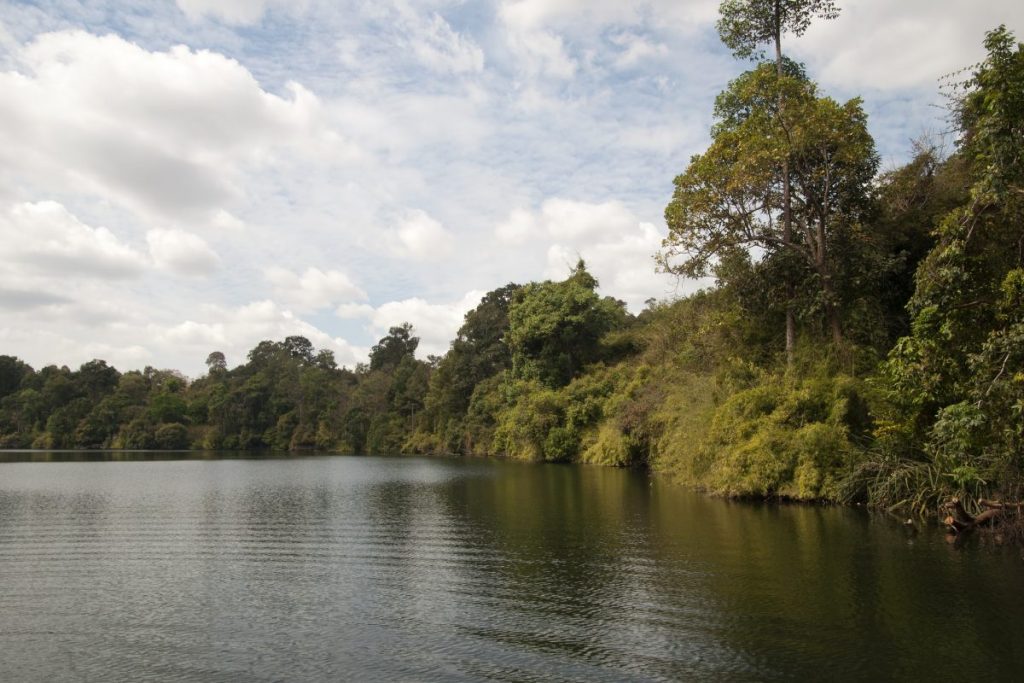 Hidden in the Cambodian jungle, is the mysterious Kbal Spean. Referred to as the “Valley of a 1,000 Lingas”, this river flows over intricately carved fertility symbols. The 1,000 lingas is a reference to low carved circles that are phallic symbols representing godly power. There are also carvings to represent yoni, the female equivalent. It is not just the carvings that should tempt you to visit Kabel Spean. The region looks like somewhere Indiana Jones would explore. Rock formations, waterfalls, and strange cryptic symbols give the feeling of being on a true adventure of discovery. 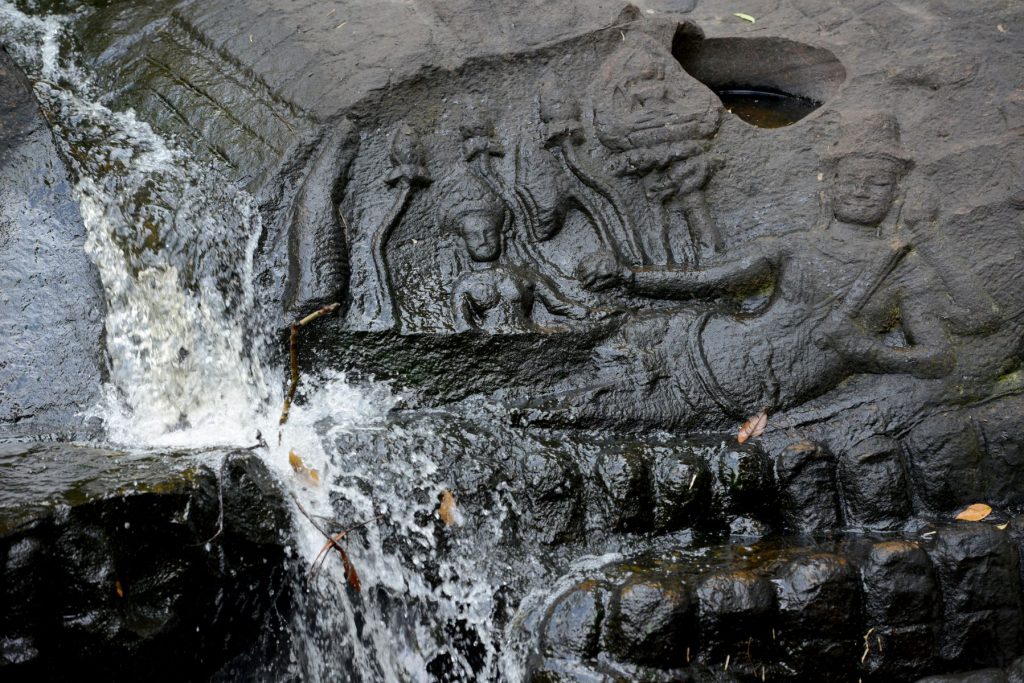 Landmines planted by the Khmer Rouge are still killing people in Cambodia today. One man, Aki Ra, went from being a member of the Khmer Rouge and laying landmines, to making it his mission to disarm them. He rid his home village and other communities of mines using little more than a stick and army knife. With the landmines Aki Ra collected, he established the Landmine Museum. Mines, mortars, guns and other weaponry make up the exhibits. There is also a mock minefield where you can attempt to locate deactivated mines. All proceeds from the museum go toward continuing the cleanup and providing shelter and support to children. Aki Ra is a man on a mission to give a future of hope to kids orphaned or injured by landmines. 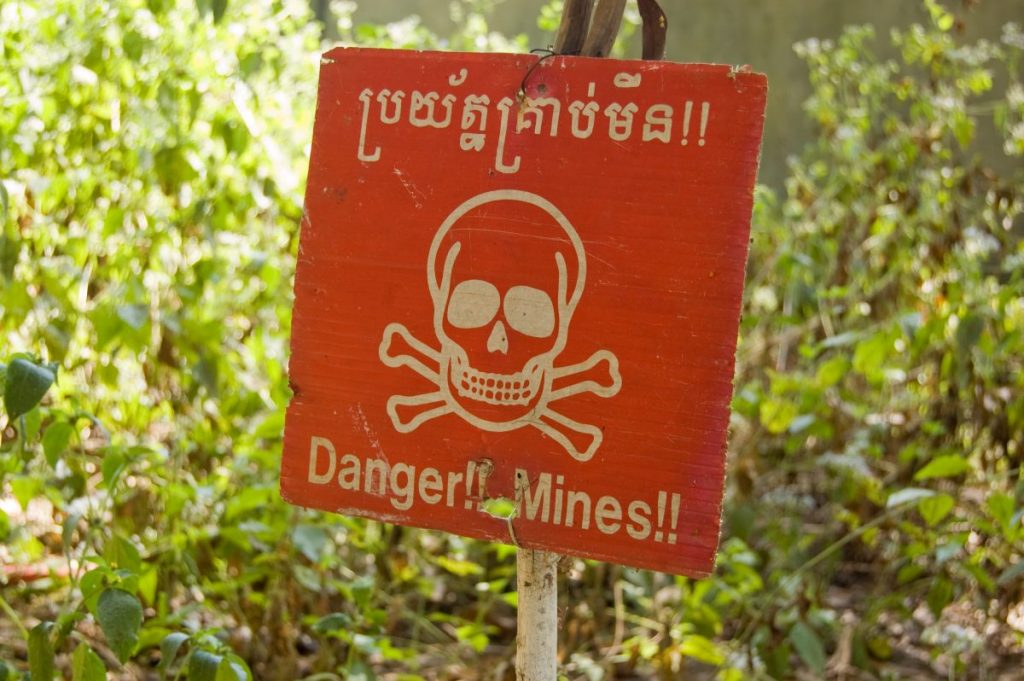 If temples are not your thing, Cambodia definitely has much more to offer you. Ten miles outside of the touristy Sihanoukville you will find the Ream National Park. Its un-spoilt white-sand beaches are virtually deserted. Thick jungle offers some great trekking opportunities. And you can take boat trips through the mangroves. The park is also home to a vast array of wildlife. One hundred fifty-five species of birds nest here, including the endangered white-bellied sea eagle and the Brahminy Kite. If you are lucky, you may get a glimpse of sun bears, fishing cats, gibbons, and the scaly pangolin anteater. Ream National Park is a stunning part of Cambodia still untouched by tourism. 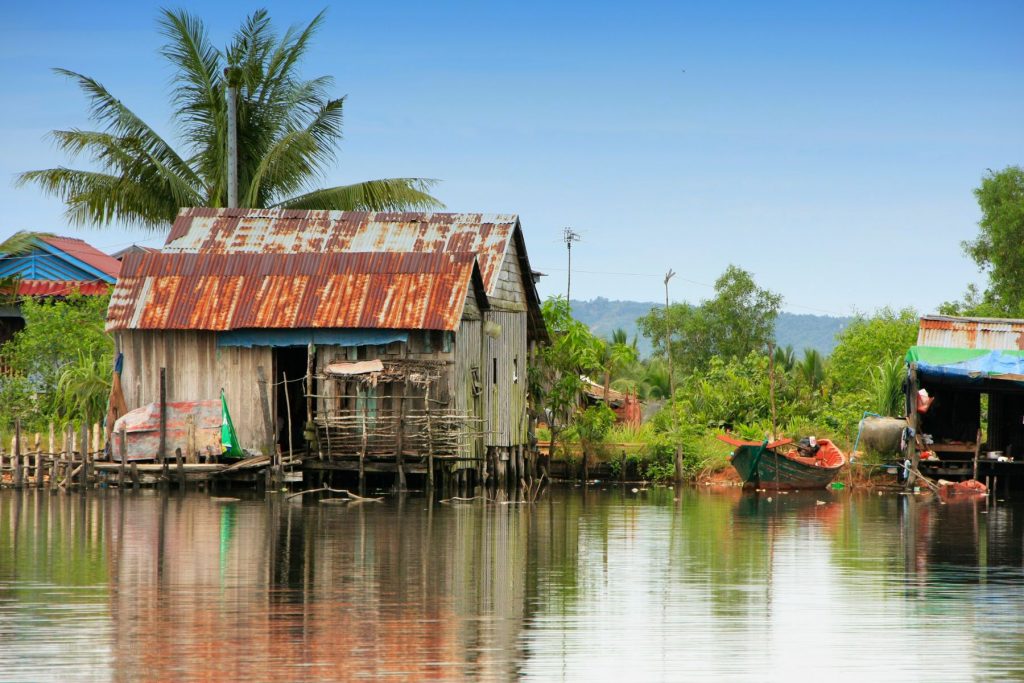 Get Back to Basics on Rabbit Island

If you are looking for a place to escape, spend some time on Koh Tonsay, or Rabbit Island. The island has no electricity which also means no Wi-Fi! You will be totally off-grid. Spend your days chilling in a hammock or kicking around a football with the local kids. Chat with the locals, play cards. Do whatever it is people did before smartphones. Ramshackle accommodation and restaurant shacks are few and far between. You may have to fish for your own dinner. Rabbit Island is a beautiful, rustic place which will take you right back to basics. 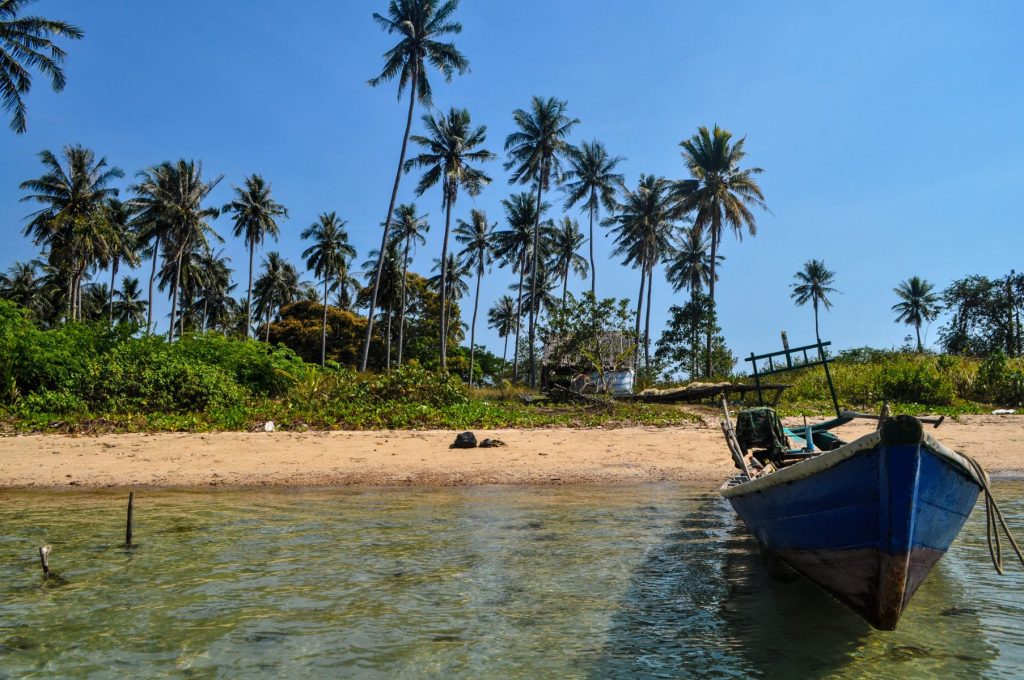