Things You Should Know When Visiting Sarajevo

Deep in the heart of Southeastern Europe lies Sarajevo. Sarajevo is a unique city that many describe as “where East-meets-West.” Historically, the city held a reputation as a religious melting pot. As a result, many cathedrals, synagogues, and mosques line the streets of Sarajevo. Along with its many religious buildings, Sarajevo’s streets are also home to a variety of museums, street food vendors, and historical monuments. The surrounding mountains, rivers, and forest provide ample opportunities for nature lovers to explore and enjoy.

A City of History

Sarajevo is a city that has experienced some of the most tragic parts of the world’s history. Archduke Franz Ferdinand’s assassination in Sarajevo in 1914 was the spark that precipitated World War I. Shortly after, Sarajevo would play a role in World War II, as well. Several decades later, the city would become involved in a four-year siege during the Bosnian war from 1992 to 1996. Though these events were grim, they pushed Sarajevo into the world’s view. The scars of war still mark the city, but it has recovered beautifully and embraced its role in history. 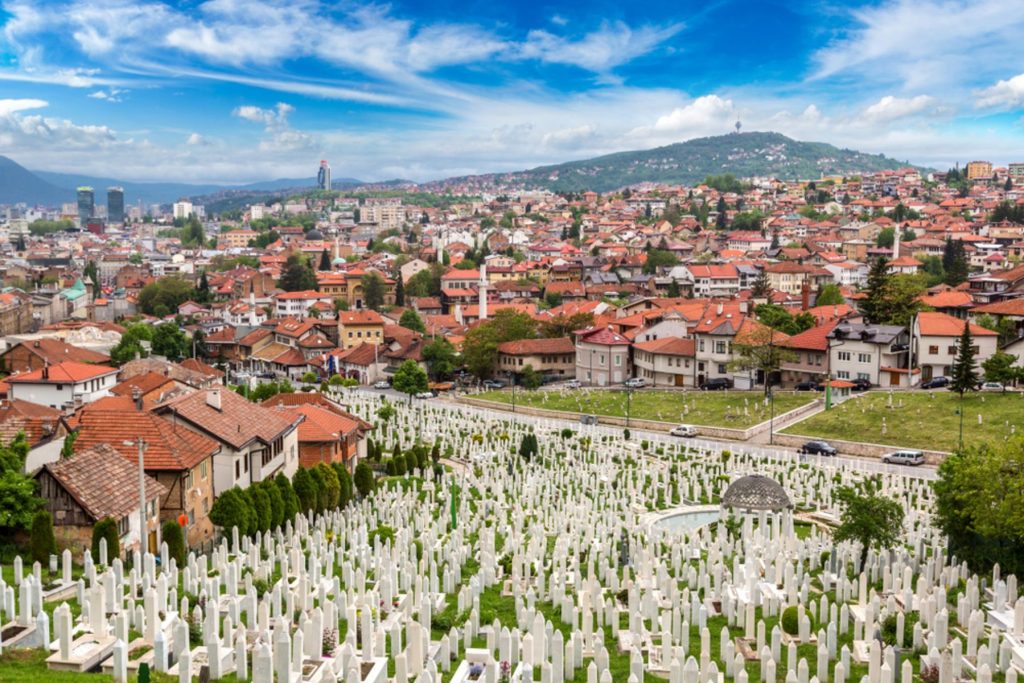 Because of its location, Sarajevo’s climate is under the influence of the cooler European weather from the north and the warm Mediterranean air from the south. In general, the year-round temperature remains balanced. The coldest month of the year is January, which averages a temperature of around 30 degrees Fahrenheit. The warmest month of the year is July which reaches around 66 degrees Fahrenheit. Sarajevo remains relatively cloudy through most of the year, though it tends to clear up in the late summer. 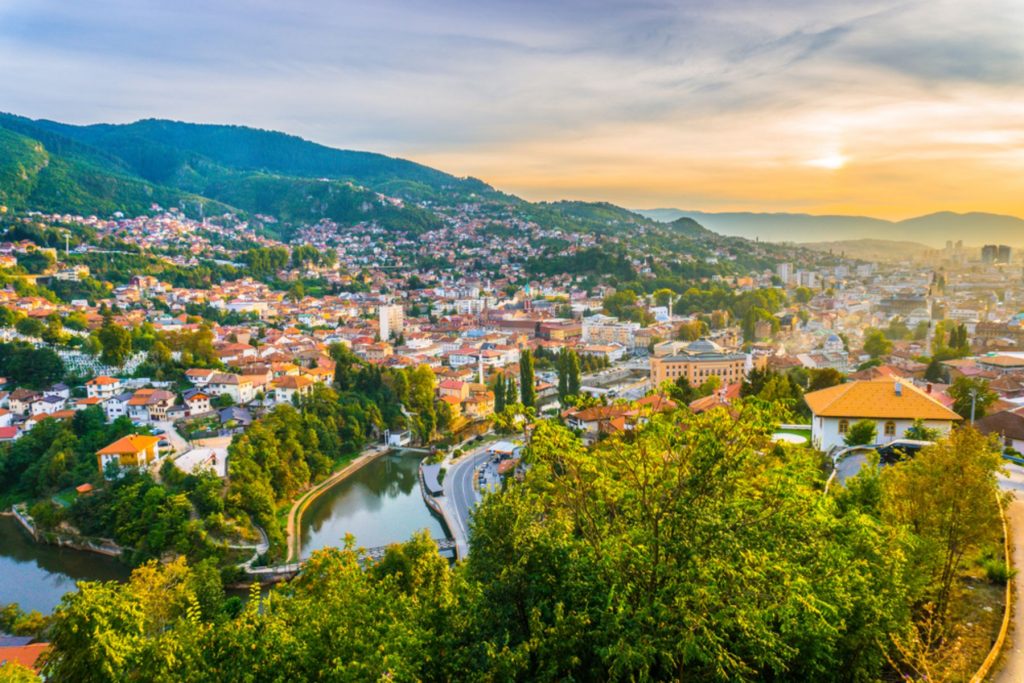 The marks that history has left on Sarajevo have given rise to some of the most interesting museums in the world. The Brusa Bezistan, a 16th-century bazaar, is now home to part of the Museum of Sarajevo. Its exhibits include jewelry and shards of pottery from Neolithic archaeological sites. Several museums, such as the Gazi Husrev-beg’s Museum, Despić House, and the Svrzo House provide unique looks at Sarajevo’s history under the Ottoman Empire. Art House Svadah is an old merchant storehouse that now acts as a museum for folk music and its interpreters. The Ars Aevi Depot contains one of the most important collections of modern art in all of Europe. 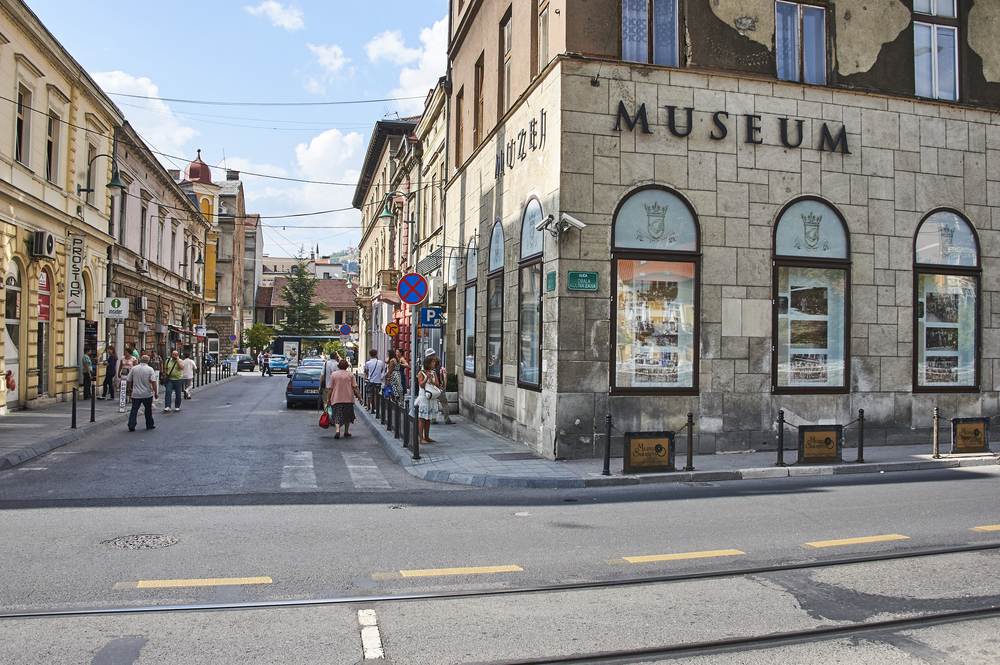 Though learning about Sarajevo’s is a great way to spend the day, you're going to need to eat. The city's unique street food allows you to eat while exploring. There are many street food vendors across Sarajevo that offer some of the tastiest and most unique street food you’ve ever had. One of the most popular dishes is ćevapi, which is flatbread that contains sausages consisting of minced meat. A serving of cottage cheese or sour cream and a healthy bit of white onion top the dish. Other popular street foods include the tasty somun, which is like a flatbread, and the burek, which is like a spiced mincemeat pie. 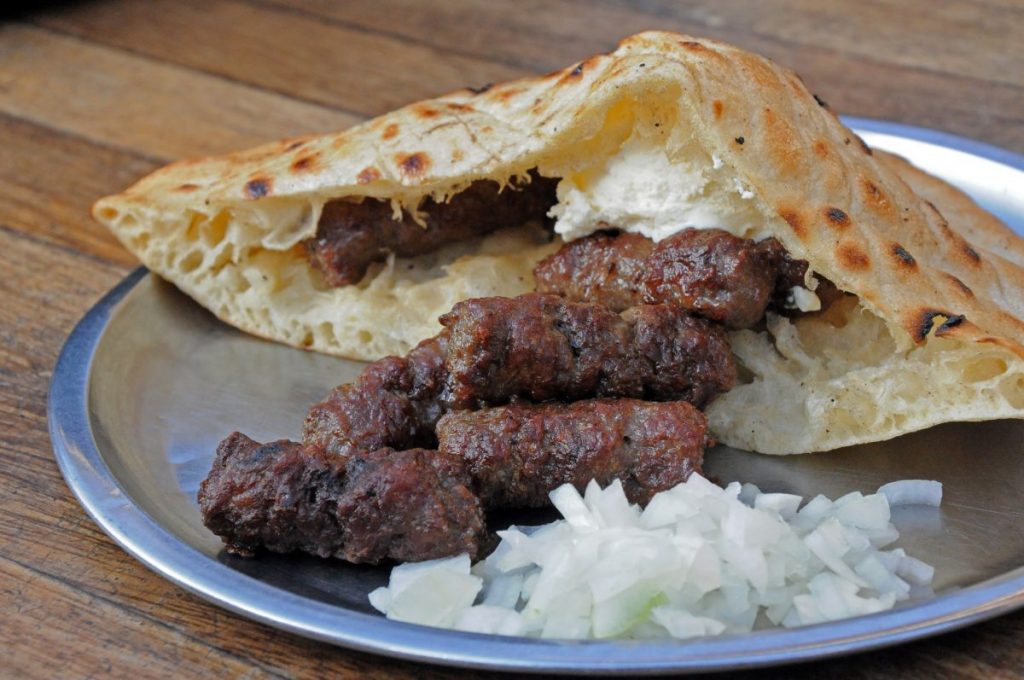 Street food is excellent for eating while exploring the city, but sometimes you just want to sit down to a nice meal. Sarajevo hosts several restaurants with incredible histories and great food. At one point in time, the Austrian-Hungarian Monarchy began tearing down many buildings. One resident of Sarajevo refused to allow them to tear down his house, and forced them to move his house across the river, brick by brick. This house became a traditional Bosnian restaurant named Inat Kuća, literally “house of spite,” and remains a historical monument. Pivnica HS is a restaurant that belongs to the Sarajevska Pivara, a brewery that has been operational for over 150 years. Another restaurant, Morića Han, sits on the ground floor of a 500-year-old inn that provided accommodations to merchant caravans. 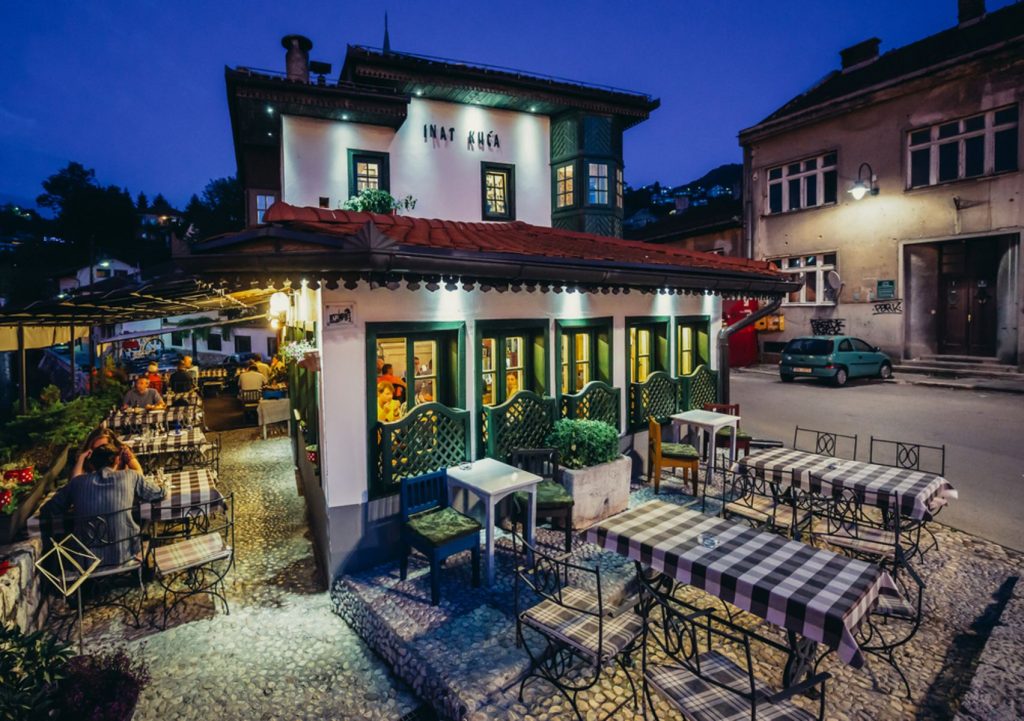 For hundreds of years, Sarajevo was a part of the vast Ottoman Empire, which was one of the largest empires to ever exist. The Old Ottoman Bazaar is a remnant of this legacy. Visitors can get a feel of the old world as they browse oriental spices, taste a variety of foods, and appreciate artisan crafts. If you’re in Sarajevo and would like to experience history while also picking up the perfect souvenir, visit the Old Ottoman Bazaar. 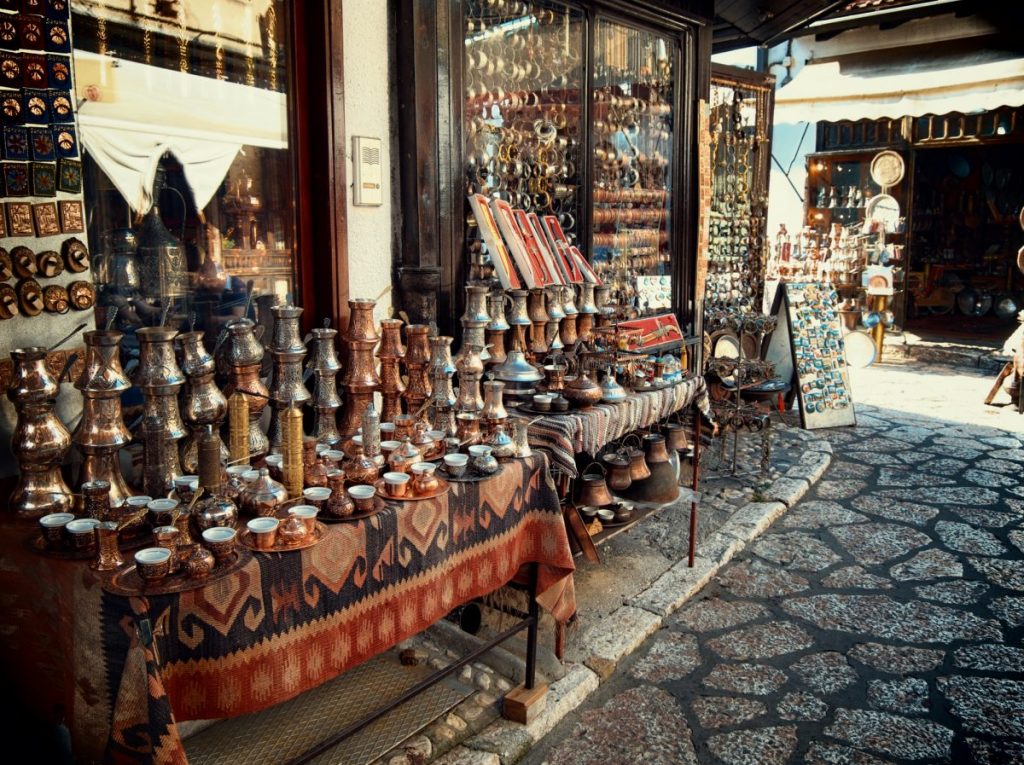 Though many people associate mountains with cold, wintery scenes, Sarajevo is actually an incredibly green city. The city’s oldest promenade, Dariva, sits near the eastern entrance to the city and has hundreds of trees lining its path. At the end of the path lies the Kozija Ćuprija, the only surviving bridge on the Miljacka River from the Ottoman Empire. At Mejdan is a park that sits near the left bank of the Miljacka River. It also houses the At Mejdan Archaeological Park and a music pavilion. Velika Aleja is a promenade with over 3,000 plane and chestnut trees, each over 100 years old. Many visitors take carriages and observe the scenery as they ride along the Aleja. 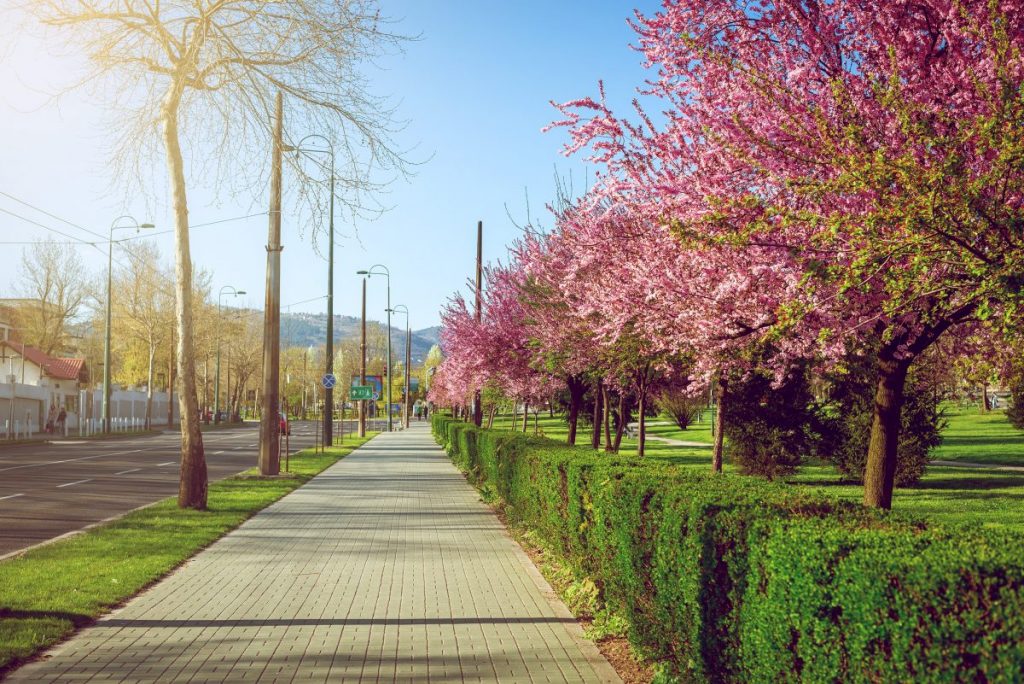 If you’re itching to get out of the city and see the best that nature has to offer, the area around Sarajevo has plenty for you. North of Sarajevo is the 100-meter high Skakavac Waterfall, which you can reach via public transport or a two-hour walk. Some visitors like to visit the popular picnic spot, Barice. The spot offers walking and biking trails and is only a short distance from the center of the city. Further from Barice is Čavljak. This area has a number of streams and forested areas, as well as a mountain lodge. 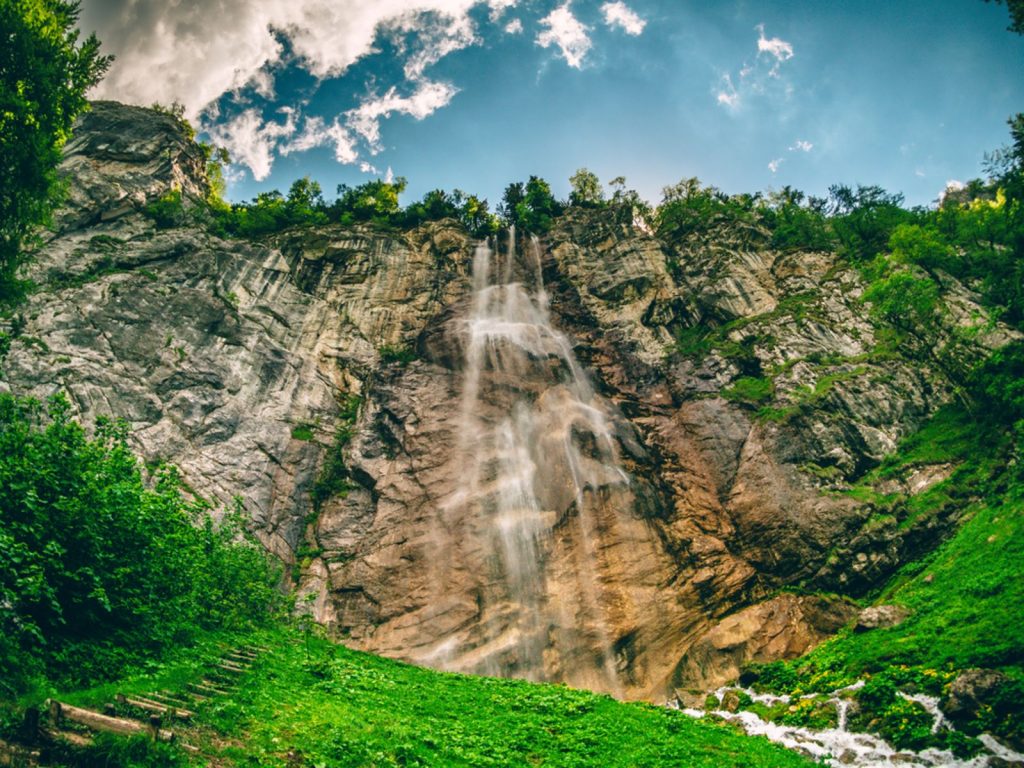 Sarajevo’s climate makes it ideal for many winter sports, and its mountains were home to the 1984 Winter Olympics. During the winter, Sarajevo becomes a hub of winter sports activity, particularly on the Olympic Mountains. Many of the mountains have hotels and apartments near their peaks, allowing visitors to stay close to the snowy fun. Bjelašnica Ski Center has around six miles of ski lanes that are suitable for a variety of winter sports. The Jahorina Olympic Center offers 12 miles of ski lanes. If you love the mountains but are not necessarily looking to ski or snowboard, there are options for you, too. Businesses along the mountains offer snowshoeing, ski touring, snowmobiling, sledding, and much more. 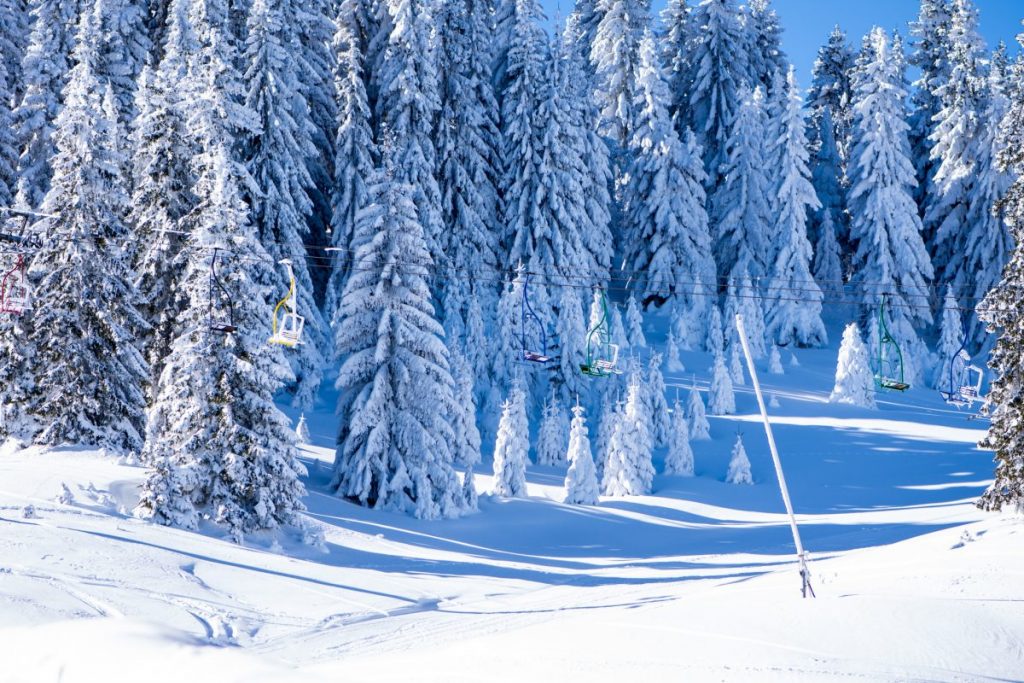 On Olympic Mountain Trebević sits Sarajevo’s first amusement park, Sunnyland. Just a short, five-minute drive or a cable car can take you from the city center to the site of the Alpine Roller Coaster. Buckle up with a partner and soar at speeds of 25 mph down a wild, twisting path. If that doesn’t interest you, Sunnyland also offers restaurants, cafes, rock climbing, and the Magic Forest playroom. Within the Magic Forest, are toys and props, slides, mazes, and electric cars for all ages. There are game rooms for those who wish to play basketball, football, or hockey. Another area acts as a fun room for dances, movies, or live performances. 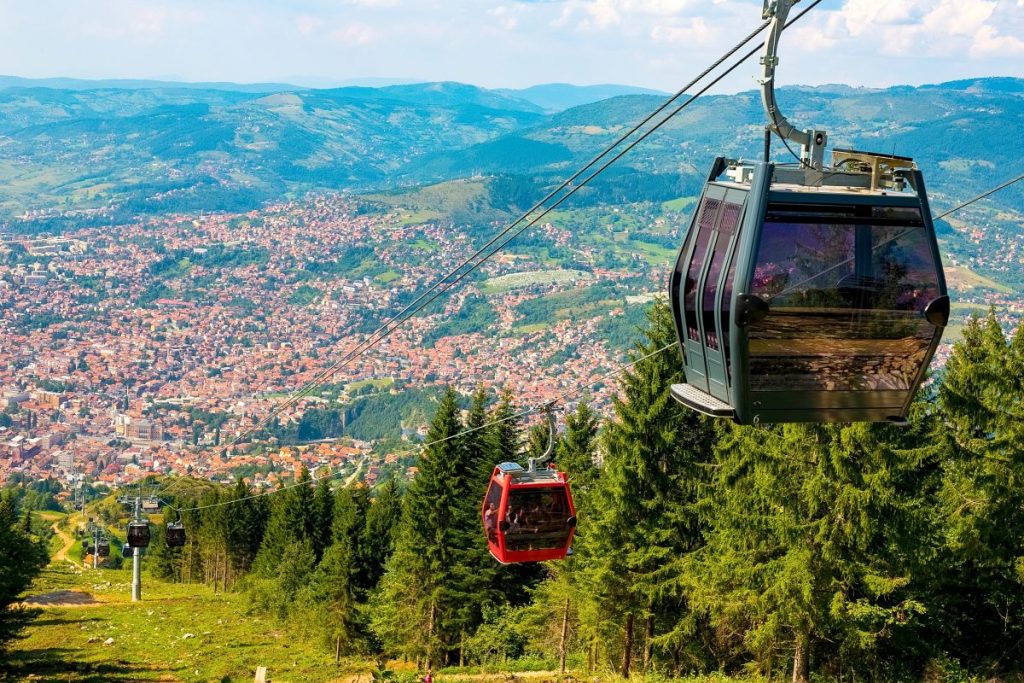