The southern capital city of Guangzhou, China, located in the Guangdong Province, offers a rich economic, and political history dating back more than 2000 years. Guangzhou was one of the first Chinese ports to welcome European traders. This connection with a variety of cultures created a distinctive way of life in Guangzhou. As the third largest city in China, Guangzhou serves as a busy trade center. Revered for its cuisine and shopping as well as its sightseeing opportunities, Guangzhou provides visitors with a unique blend of old-world culture, futuristic architecture, and scenic views.

The City Formerly Known as Canton

Many Westerners are likely familiar with Guangzhou by its Westernized name, Canton. Historians believe that the translation originated from a Portuguese transliteration for the region of Guangdong where the city of Guangzhou is located. “Canton” was much easier for Europeans to pronounce. As Portugal established its trading monopoly in the province, Western maps, schedules, and books identified the area as Canton. In 1918, Chinese officials formally adopted the name “Guangzhou” for the city. Guangzhou possesses ten districts. Local historians consider Yuexiu and Liwan to be the cradle of the Cantonese culture. 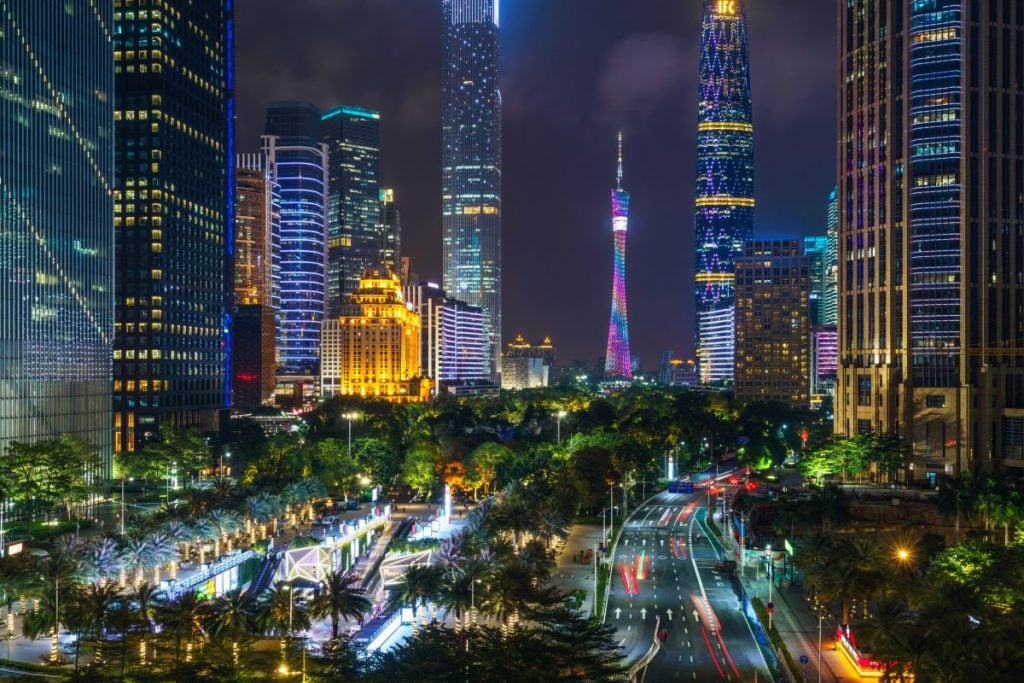 Guangzhou is a short 40-minute plane trip from Hong Kong, separated from other parts of China by mountains and water in the north and northeast. Some visitors prefer the 3-hour bus trip so that they can take in a view of the countryside. Guangzhou sits near the head of the Pearl River, the third longest river in China. The main part of the city is located along the north bank of the Pearl River. Its climate is subtropical monsoon but is relatively mild year round. Relative humidity is around 68 percent, and average temperatures are about 73 degrees. Travelers prefer to visit in autumn, from mid-October through mid-December. Spring, the city’s rainy season, tends to be more humid and cloudy. The hottest months are July, August, and September with temperatures ranging between 77 and 97 degrees Fahrenheit. 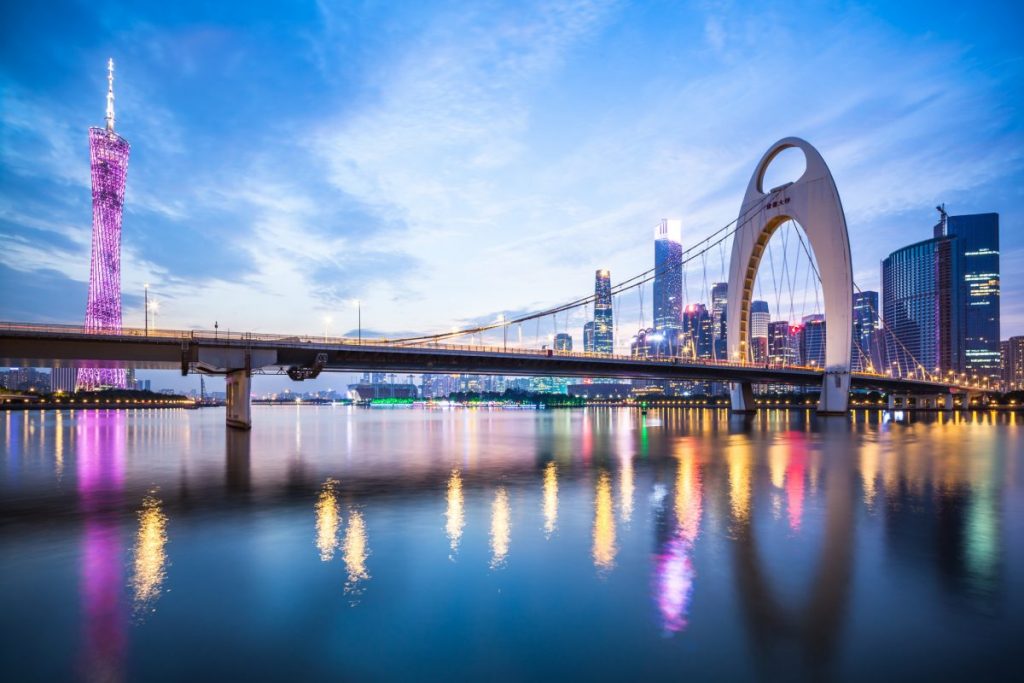 It’s All About the Food in Guangzhou

Many people revere Cantonese food, or Yue Cuisine, as one of the four great Chinese cuisines. Flavorful dishes created with a wide variety of unique ingredients including snake, abalone, shark fin, and snail, build a connection to the great banquets of the past. The Man Han Quan Xi was the most famous banquet in Chinese history, served during the reign of Emperor Kangxi in the Qing Dynasty. In recent decades, a local Guangzhou hotel has recreated this banquet, serving 108 different dishes and attracting foodies from around the world. Local restaurants serve famous traditional dishes featuring fresh vegetables, dumplings, and noodle recipes from the region’s past. Delicious and visually appealing dishes such as Guangshi Shao La, a combination of grilled, pickled, and preserved meat using combinations of suckling pig, roasted duck, baked goose, barbecued pork and other braised foods are favorites from the region. 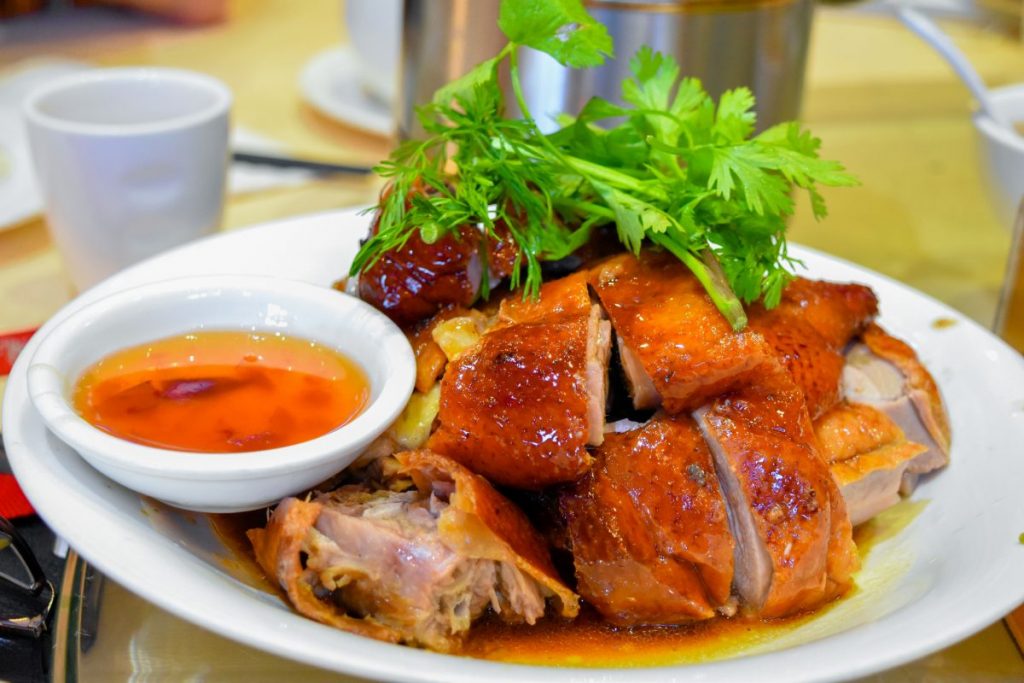 There are thousands of factories in the Guangzhou area producing an array of products at competitive prices including inexpensive electronics, clothing, jewelry, and souvenirs. Located near Guangzhou Station visitors will find an abundance of wholesale clothing markets, including Baima Market, the most popular high-end fashion supplier in Guangzhou. In the Yuexiu District, visit Tianma, a 10-story building that houses more than 1000 shops featuring international brands and leisure wear. There are world-famous malls in Guangzhou as well, including the Zhujiang New Town area and the underground Mall of the World located next to the IFC Tower in the Tianhe district. The China Import and Export Fair is a twice-yearly event in Guangzhou, bringing thousands of visitors to the city. 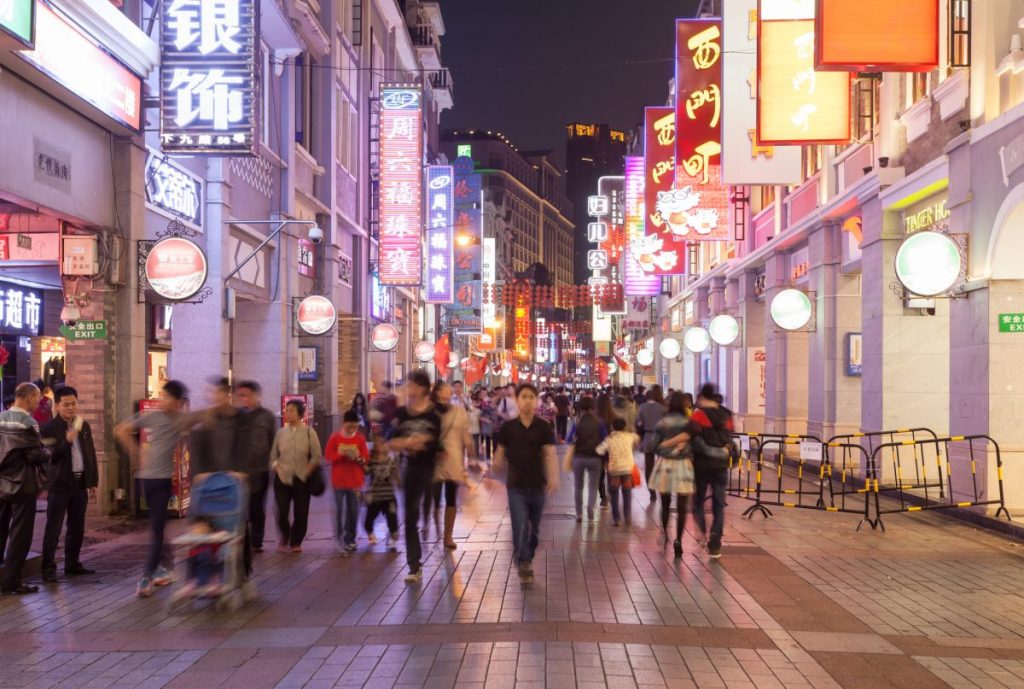 The mild climate and year-round warm weather in Guangzhou, China create the perfect environment for growing fresh flowers. Nicknamed the “Flower City,” Guangzhou’s history of flower planting dates back about 500 years. The Chinese believe that flowers are a symbol of prosperity. Each year, the city hosts week-long flower fairs in February during its annual Spring Festival just before the Chinese New Year. The event attracts millions of visitors and artisans to the city from around the world. 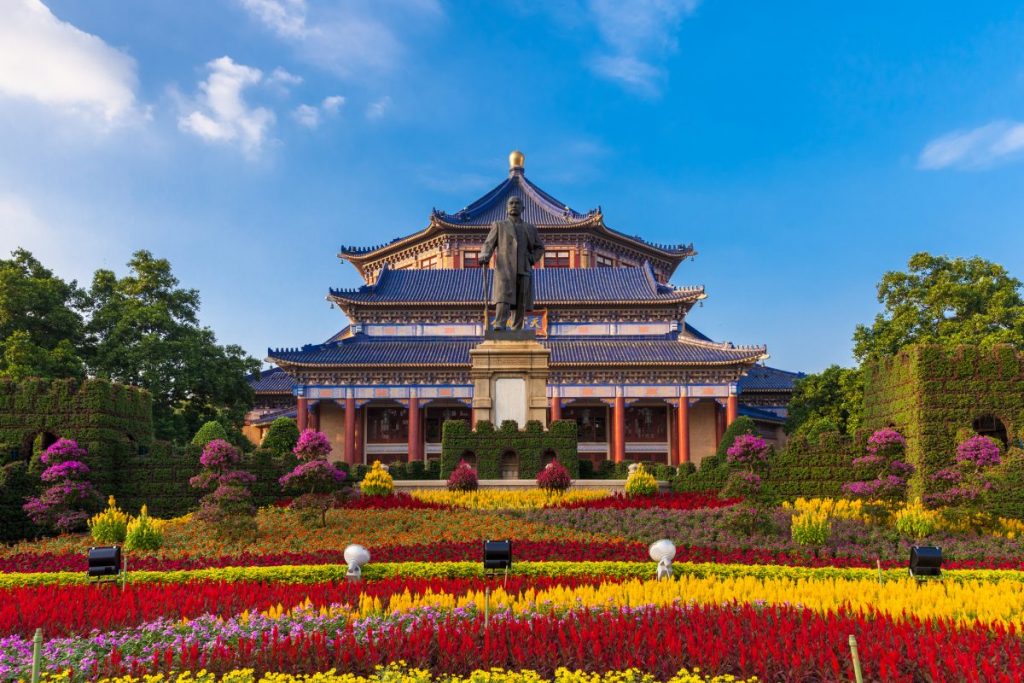 The city offers an active nightlife with pubs, karaoke bars, and a vibrant club and music scene. One of the most popular areas is Huanshi Lu, a lively area located in the center of the city and a favorite among locals, tourists, and expats. Binjiang Lu is a cluster of bars located along the Pearl River for those who prefer to enjoy their cocktail in a scenic view. For those who aren’t into the bar scene, the Pearl River Night Cruise offers beautiful views of both sides of the river. Different packages are available, including dinner or a light show at Bai-e-Tan. 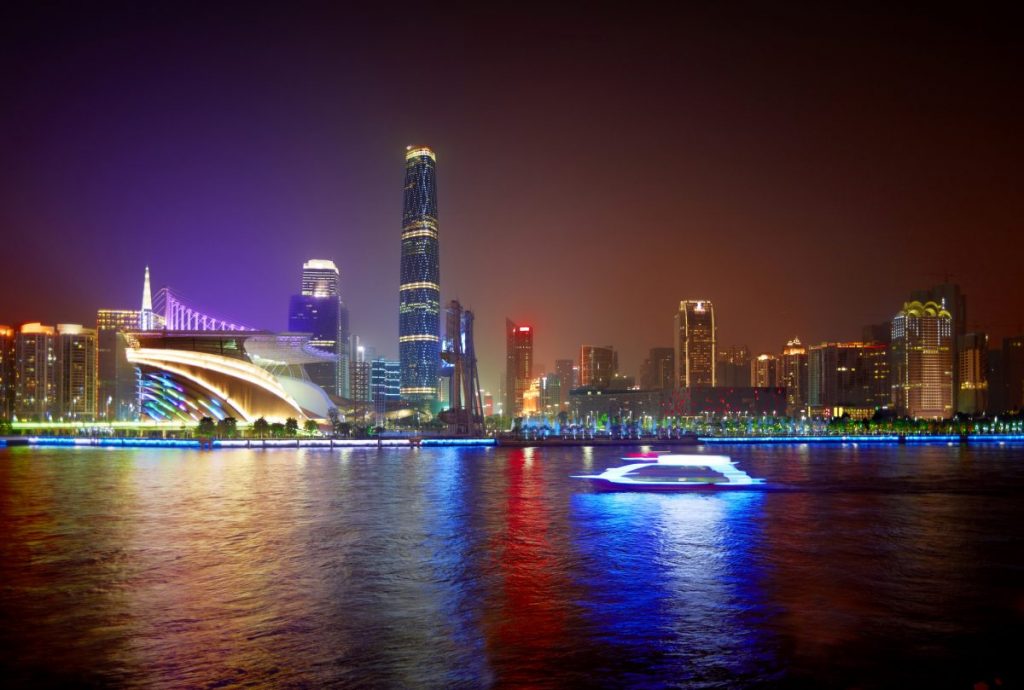 Baiyun Shan, also known as White Cloud Mountain, is a destination for those seeking more natural surroundings. This 10-square-mile area is one of the most famous destinations in Guangzhou and offers six main areas where people can relax and escape the bustle of the city. One of the most popular, the Yuntai Garden in Santailing Park, is a vast garden containing an assortment of blooming plants and trees. Bird Spring Valley Park is a bird lover’s dream, where visitors stroll through China’s largest natural aviary of native birds. Baiyun Shan is located about 10 miles north of the city. The scenic vistas provide excellent photo and selfie opportunities. 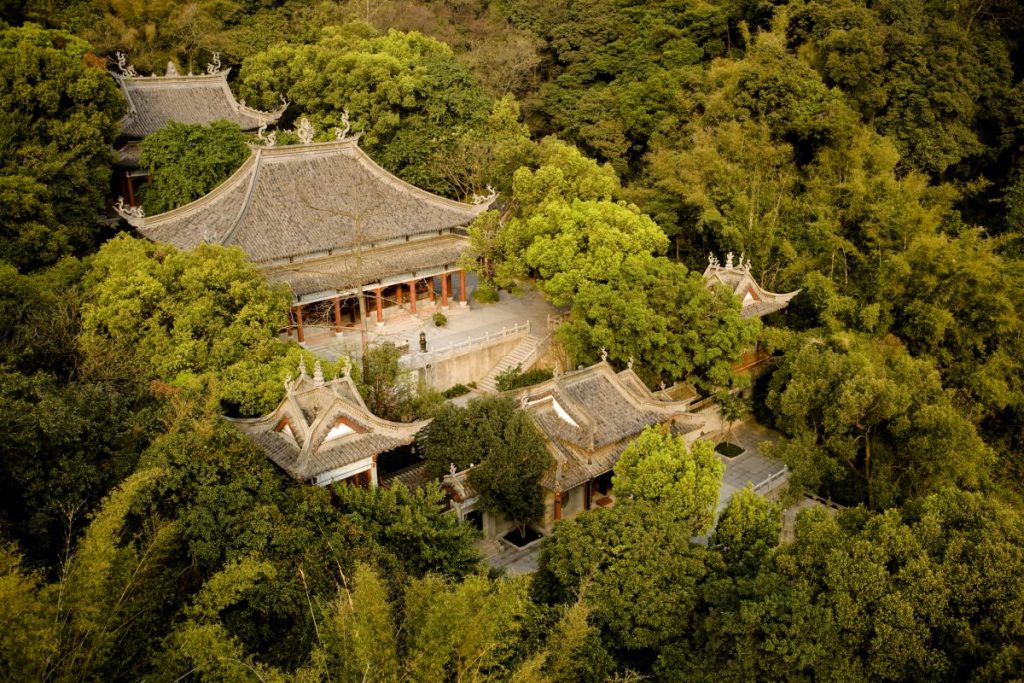 Though development began in 1888, the Chen Ancestral Shrine’s construction didn’t end until 1894. Members of the Chen clan spared no expense in its construction, and many people consider each building to be a work of art. Ornate carvings and intricate tile work highlight its craftsmanship. A large wall surrounds the complex, which houses nine halls, six courtyards, and 19 buildings. Many of the buildings within the complex contain the Guangzhou Folk Art Museum, which features bone carving, embroidery work, paper cutting, ivory, jade, and woodworking art by Guangdong artists. 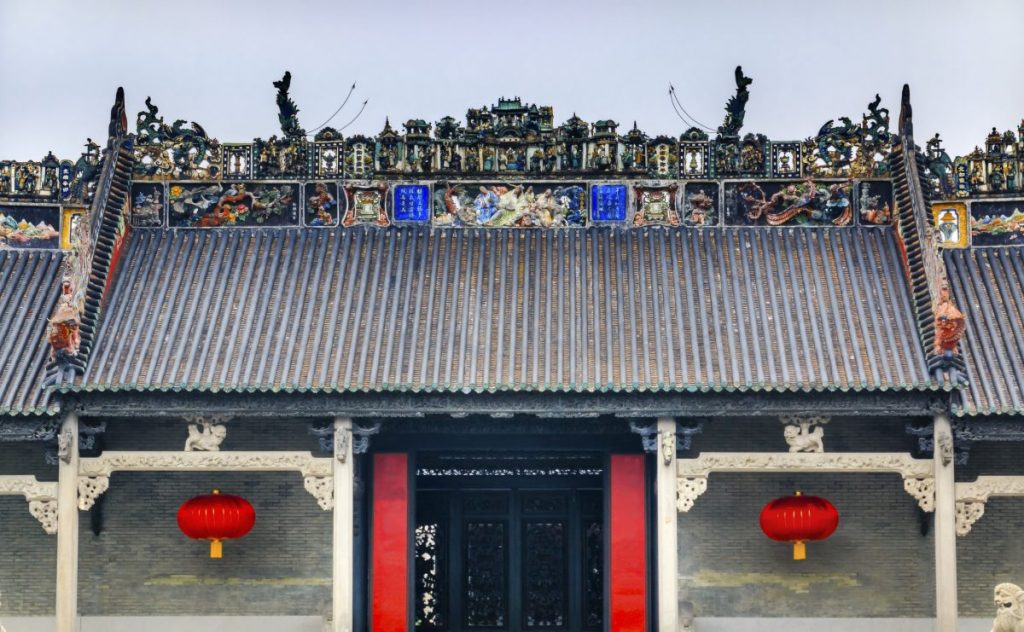 Must-See Temples and Cathedrals in Guangzhou

The early influence of Western cultures combined with traditional Chinese culture is a unique aspect of Guangzhou. The many temples located throughout the city offer historical, cultural, and political “snapshots” into the spiritual history of the area. 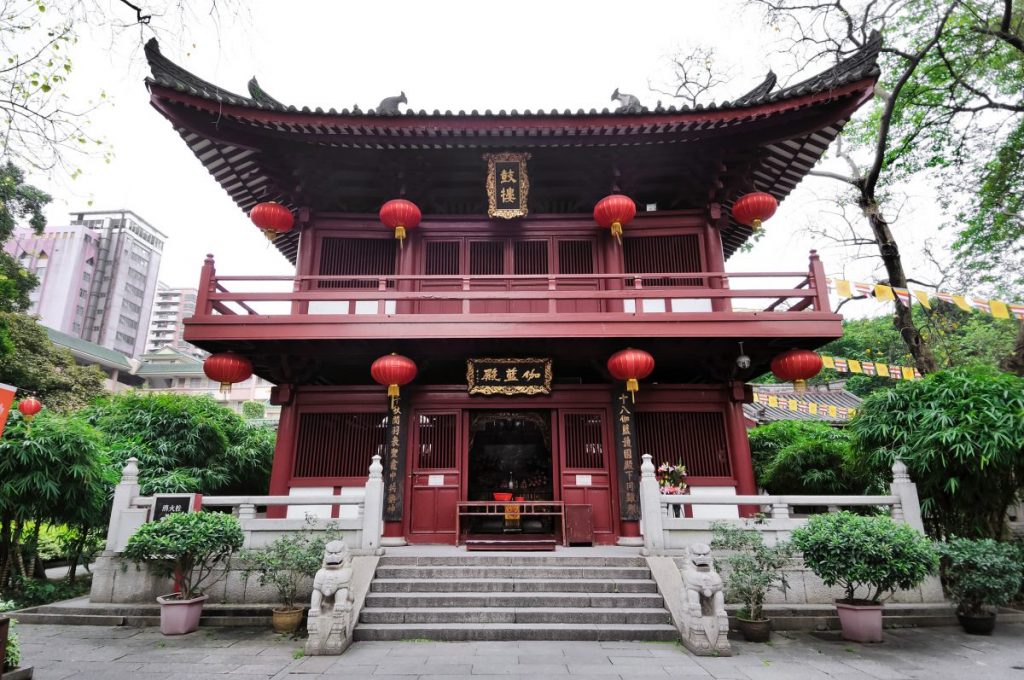 For those seeking traditional Cantonese cultural experiences, Guangzhou and the Guangdong province are hubs for Cantonese Opera, one of the major categories of Chinese opera. This colorful, unique type of opera combines singing, music, acrobatics, martial arts, and acting to create one of two types of opera plays: Mou, which emphasizes war, and Man, which focuses on poetry and culture. The Jiangnan Theater in the Haizhu district offers monthly performances of traditional Cantonese opera. 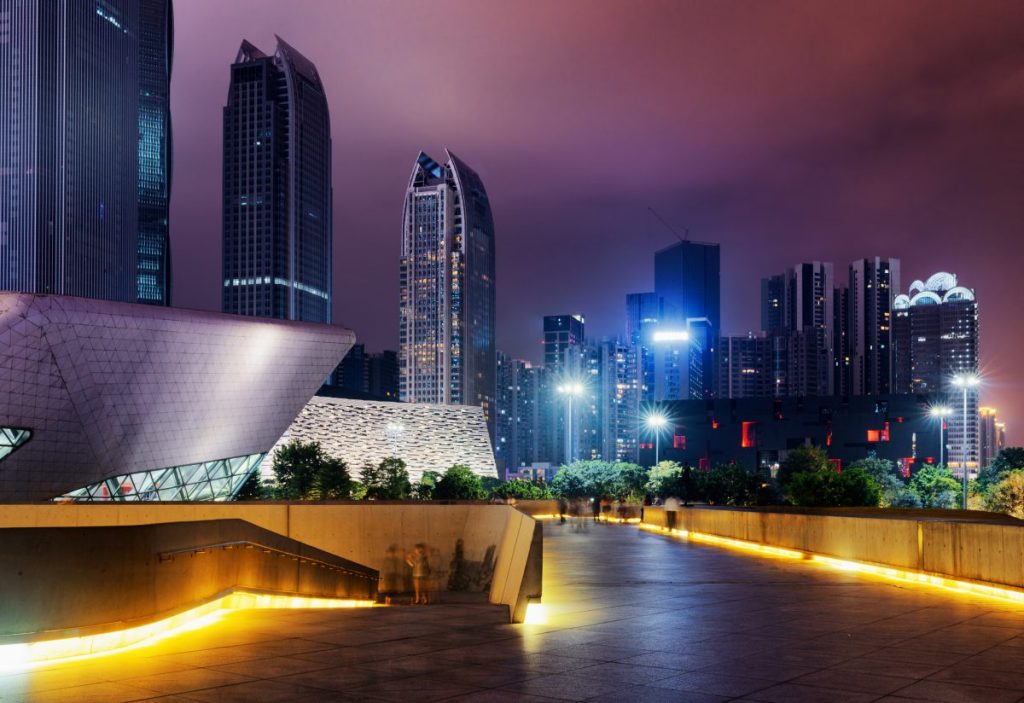