Tokyo is the world’s largest city. According to the United Nations’ data, more than 37 million people are living in the metropolitan area, with 13 million residing in the greater Tokyo area. Located on Japan’s largest island, Honshu, the city extends westward into the Kanto Plain.  In the center of the city lies the Imperial Palace. Within the 23 wards, or Ku, located in the Tokyo Metropolis, there are 3,112 neighborhoods, each with their unique connections to the culture.

Koenji is a neighborhood located within the Suginami ward. It is popular not only for its underground music scene but also for its retro vibe. Recognized as the home of Tokyo’s punk scene in the 1970s, Koenji now has vintage record shops and specialty stores selling unique, one-of-a-kind music collectibles and retro clothing. With a variety of music bars, quaint cafes, chic restaurants, and delicious, inexpensive eateries to choose from, there are always new places to explore. The famous Awa Odori Festival takes place every year in August, celebrating the traditional Tokushima dance of the same name. 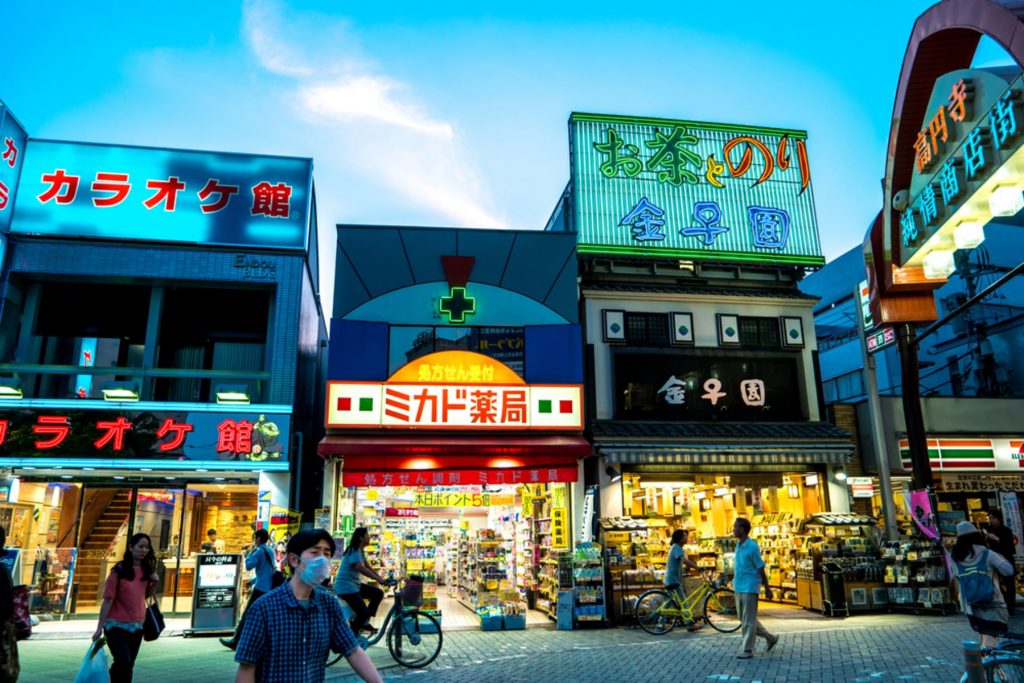 This urban, hipster neighborhood located in the Setagaya District, offers a bohemian-retro experience with roots deeply embedded in Japanese farming culture. Shimokitazawa survived World War II air raids and became a market source for second-hand goods sought by U.S. soldiers. Popular among younger people for its numerous vintage clothing shops, small music venues, and laid-back atmosphere, Shimokitazawa was once selected by Vogue magazine as the “coolest” neighborhood in the world. Take a 20-minute walk south of the Shimokitazawa station to see Tokyo’s lucky cat temple, Gotokuji, the birthplace of the maneki-neko, a Japanese lucky charm. 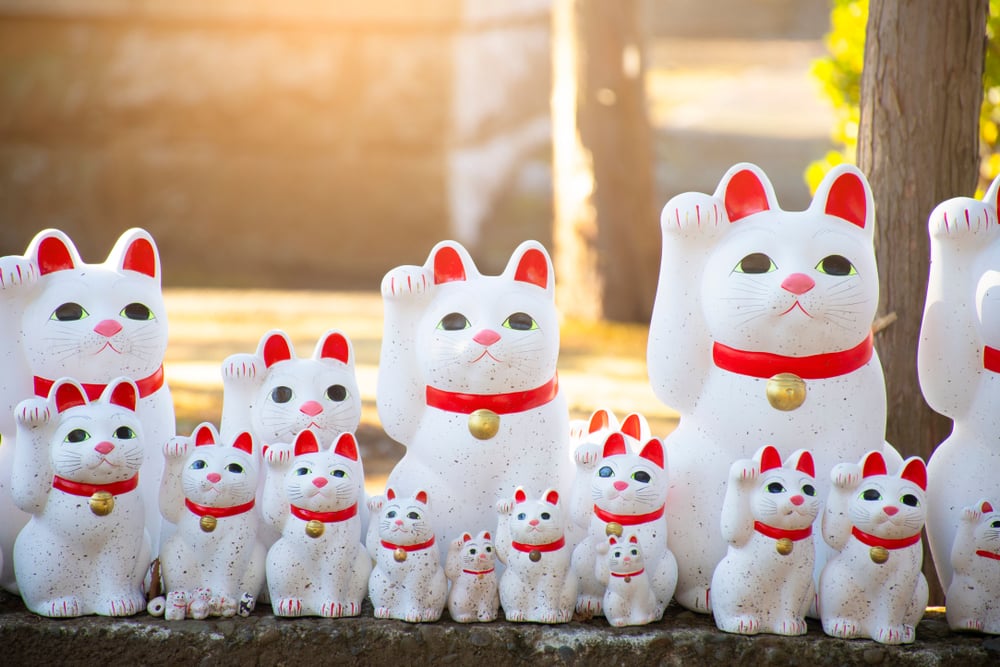 Although Shibuya is a ward in Tokyo, many people refer to Shibuya as the area surrounding the Shibuya Station. Shibuya is the birthplace of many Japanese fashion and entertainment trends and is a top cultural hub for Tokyo youth. The famous Shibuya Crossing is the busiest intersection in the world and is the site of Tokyo’s New Year’s Eve countdown. The statues of Moyai and Hachiko are popular, designated meeting places, while Love Hotel Hill has the largest concentration of love hotels in Tokyo. Take a stroll through Yoyogi Park just northwest of the Shibuya station or visit the Spain Slope, a 100-meter pedestrian area offering top shopping and eatery options. 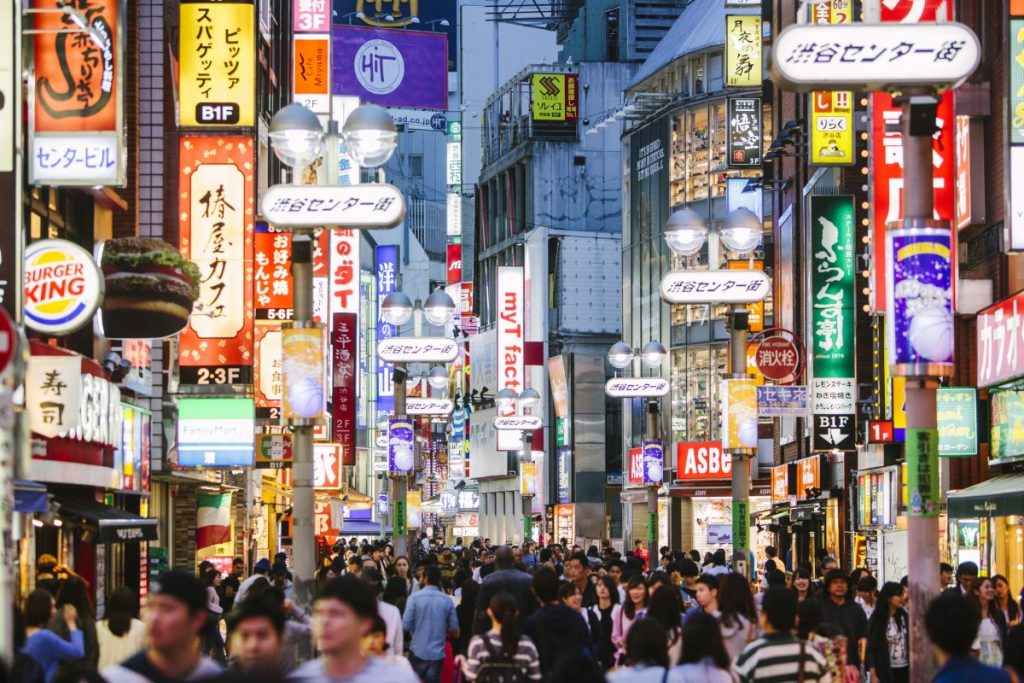 The Harajuku station is between Shinjuku and Shibuya on the Yamanote Line. Harajuku’s reputation for being the hub of many of Japan’s most extreme fashion subcultures actually began during the Allied occupation during World War II. Today it is an international fashion center. Decora Japanese street fashion and lifestyle started here in the late 1990s. The youth-oriented culture in the Harajuku neighborhood offers a combination of independent boutiques and high-end, luxury merchandisers. The Jingu Bashi bridge connects Harajuku Station with the entrance to the Meiji Shrine. On Sundays, a variety of style aficionados and subcultures meet there to showcase their style creations. 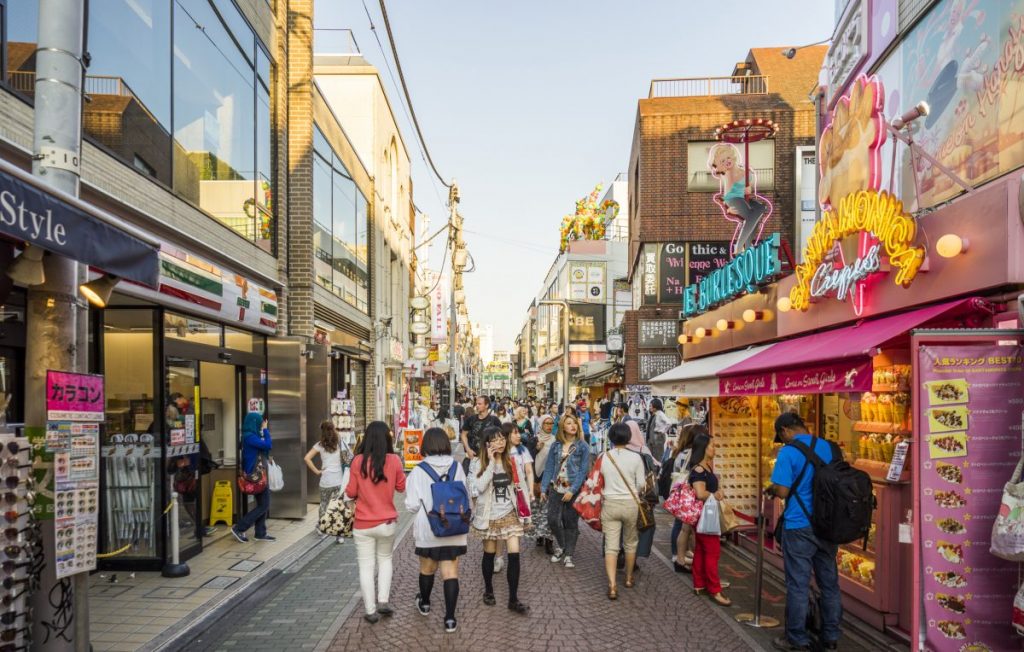 For those seeking a more traditional Japanese neighborhood, Asakusa is one of Tokyo’s shitamachi, or “low city” areas. Once the leading entertainment center in Tokyo, today it provides an atmosphere of the city’s past. Filled with rickshaw drivers and pedestrians dressed in kimonos, Asakusa is a clean, safe district with souvenir shops and restaurants with traditional fare. Located within a 5-minute walk from Asakusa station, Senso-Ji Temple is Tokyo’s oldest temple, featuring a sacred statue of Kannon, the goddess of mercy. Although it was destroyed during World War II, the temple was rebuilt using donations from the Japanese people. In April, the sakura trees along the Sumida River are in full bloom and are a popular destination. 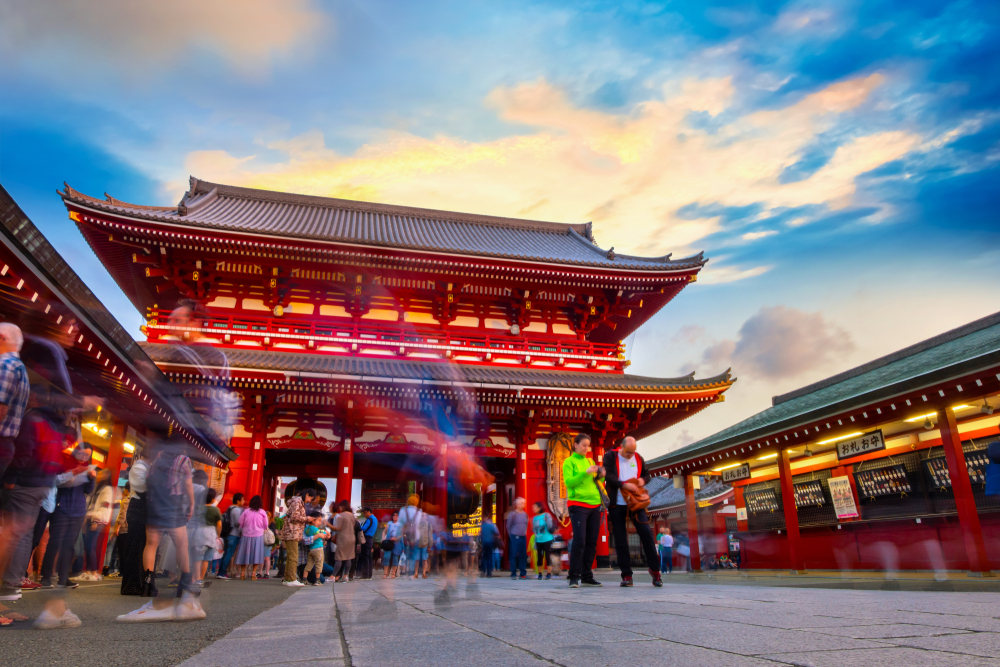 Just south of Shibuya and north of Meguro is Ebisu, the home of the Ebisu Garden Place and 144-acre Shinjuku Gyoen National Garden. The palace sits on the site of the private mansion of Lord Naito, an Edo-era feudal lord. Recognized as one of the most expensive residential areas in Tokyo, Ebisu is the quieter version of neighboring Shibuya. With a variety of smaller restaurants, Japanese pubs called izakaya, and casual tachinomi standing bars, this neighborhood attracts an older crowd. The Yebisu Brewery was a landmark in this area, though it has since relocated. However, the old brewery building now houses the Yebisu Brewing Museum and is a leading tourist stop. 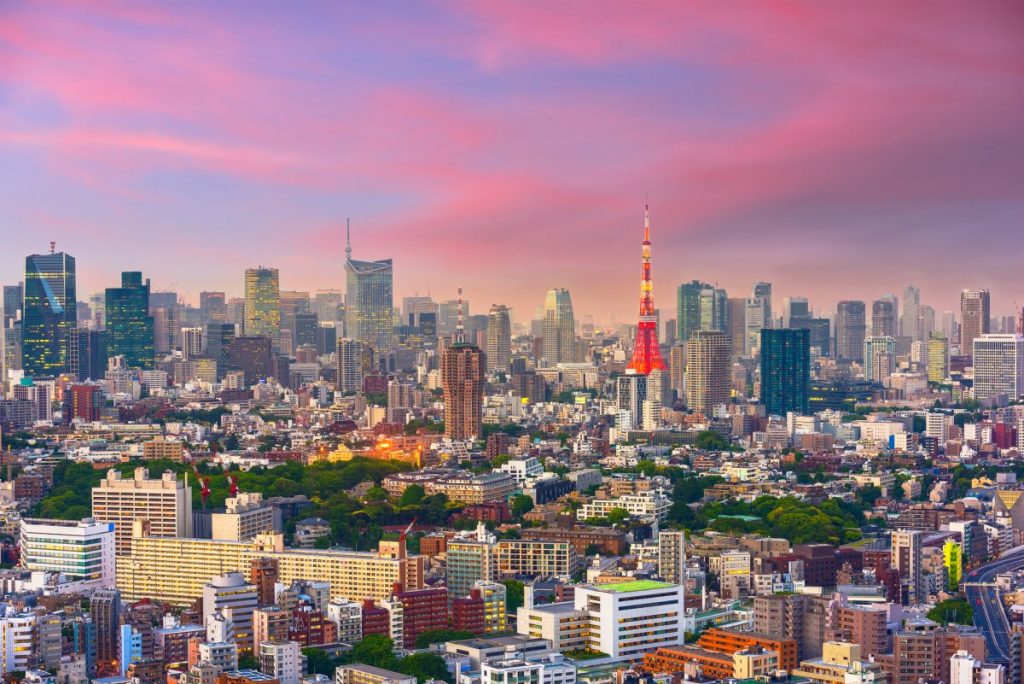 Many of the best neighborhoods in Tokyo also cater to children. Odaiba is recognized as Tokyo’s leisure paradise and one of the rare places where the shoreline is accessible. Built on a man-made island, visitors can reach Odaiba with a water bus from the Hinode Pier or via the Yurikamome and Rinkai lines. The Oedo Onsen Monogatari is home to a variety of baths and spas. Two indoor amusement parks, Tokyo Joypolis and Legoland Discovery Center Tokyo offer alternatives for family fun. The Rainbow Bridge connects Odaiba with Tokyo. At night, multi-colored, solar-powered lights illuminate the area and reflect off of the water in Tokyo Bay. 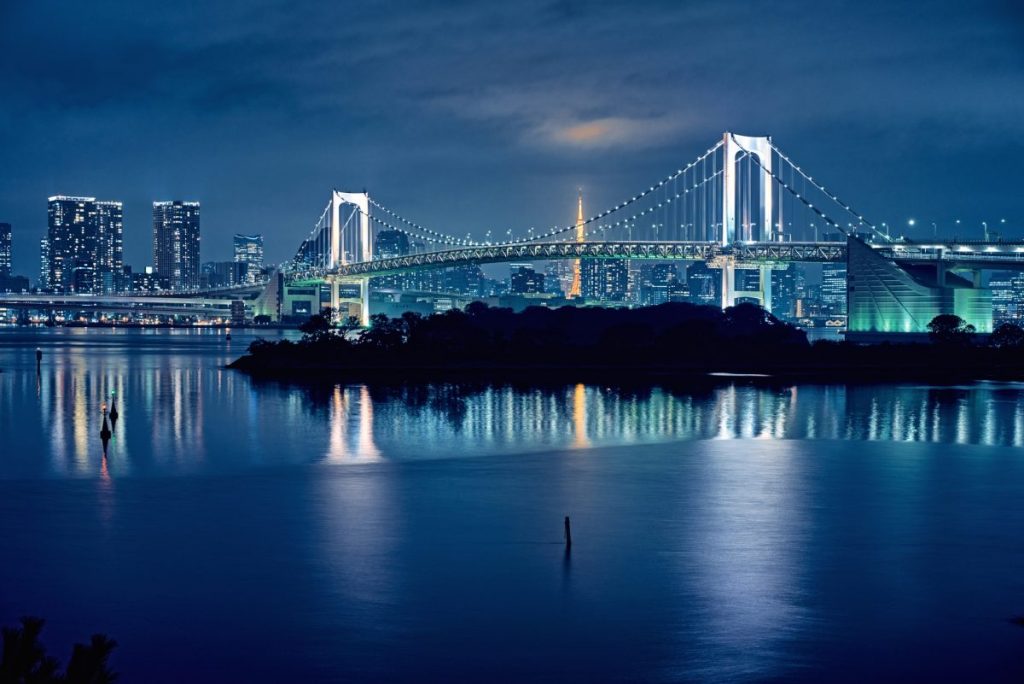 When it comes to electronics, gadgets, and gaming, the Akihabara neighborhood is a haven for tech lovers, anime fans, and otaku culture. In postwar Japan, this was a black-market electronics hub. Today, visitors stock up on duty-free tech components from one of the many electronic stores and small specialty shops that operate in a highly competitive atmosphere. Citizens and tourists alike crowd the streets on the weekends. A diverse array of shoppers seek merchandise from their favorite manga, anime, or games. In recent years, there has been a growth in otaku entertainment in Akihabara, including maid cafes that cater to the subculture’s tastes. 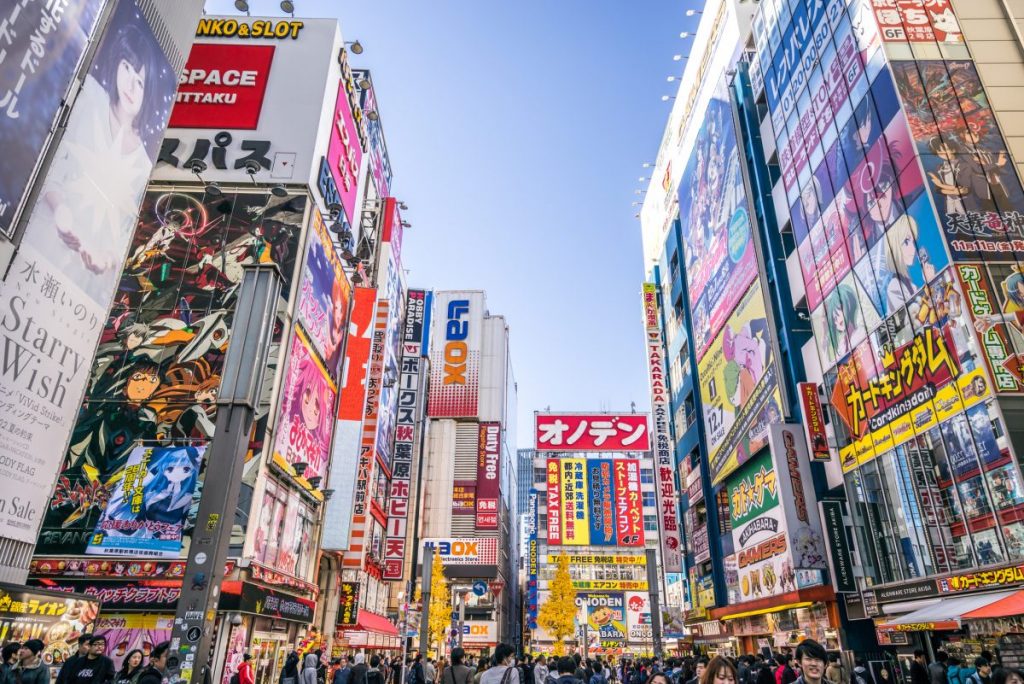 Located in the greater Yanesen area, Yanaka is one of the oldest parts of Tokyo. Part of the Taito ward, it is within walking distance of Ueno. The shopping street in Yanaka is an array of sake bars, butcher shops, souvenirs, and artisan workshops. Old-fashioned food stalls line the streets, offering traditional delicacies. The 25-acre Yanaka Cemetery, once a part of the Tennoji Temple, is the largest cemetery in Japan and has its own police station. Cherry blossom trees line the main path and create a picturesque view during the blooming season, usually in early April. 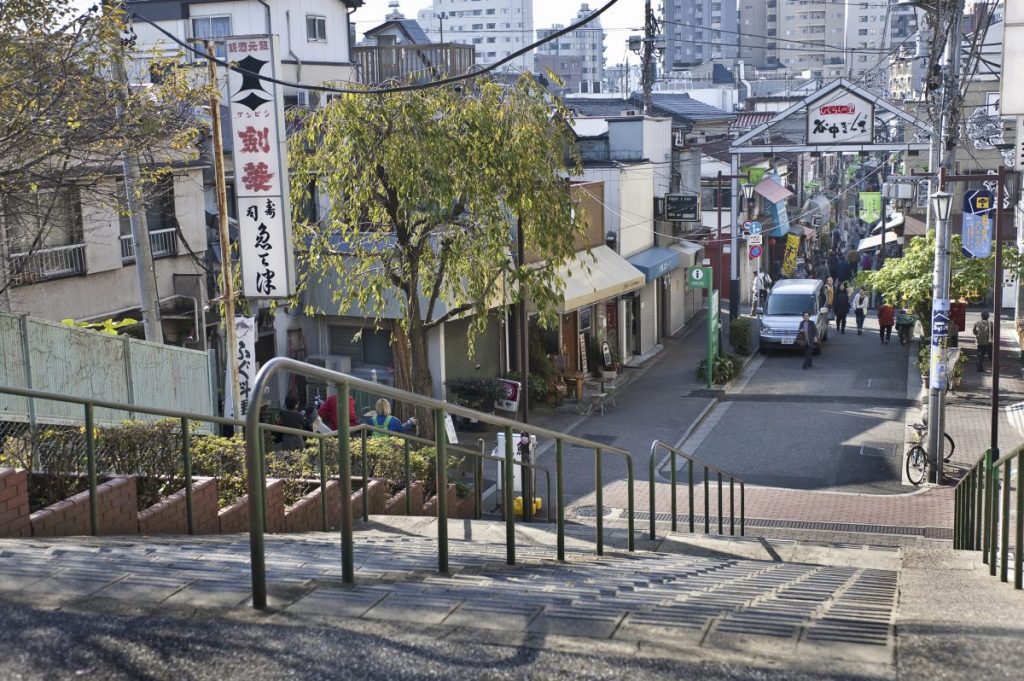 Ask a group of Tokyoites where they’d prefer to live, and chances are, a number of them would say Kichijoji, often rated as one of the best neighborhoods in the Tokyo-metro area. Located in the city of Musashino just west of Tokyo, Kichijoji is a favorite destination for shoppers and foodies alike. Sun Road is a covered shopping arcade, known as a shotengai. There are massive electronics and appliance stores, upscale department stores, antique shops, authentic Japanese souvenirs, and manga cafes, Kichijoji is usually quieter during the week, but bustling on the weekends. Dine in one of the small restaurants in the alleys of Harmonica Yokocho to get a feel for postwar-era Tokyo. 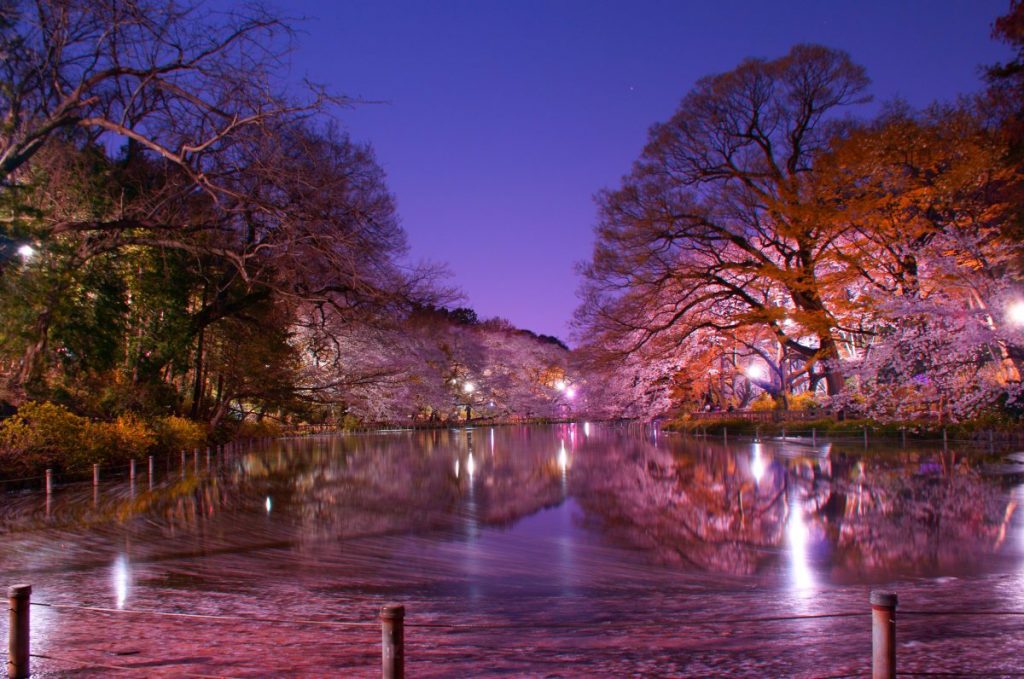