Amazing Places to Visit in Iceland

Iceland has quickly become a leading European travel destination. This Nordic nation is sought after thanks to its dramatic natural landscape featuring interesting geologic formations including volcanoes, hot springs, and geysers, as well as its beautiful glaciers and waterfalls. Winter nights may be long, but this provides an excellent opportunity to stargaze or an opportunity to view the Northern Lights. In contrast, summer days can seem endless, with many sun-drenched hours to tour some of Iceland's natural wonders.

The Snæfellsnes Peninsula is often called "Iceland in Miniature" due to the variety of majestic and beautiful natural features you can find when traveling through it. One of the most striking is Snæfellsjökull, is a twin-peaked glacier straddling a volcano on the far end of the peninsula. Surrounded by Iceland's striking coastline and lava fields, this is truly a magnificent site that gives visitors a taste of all of Iceland's glories in one spot. It was declared a National Park in 2001, one of only three such parks in Iceland. 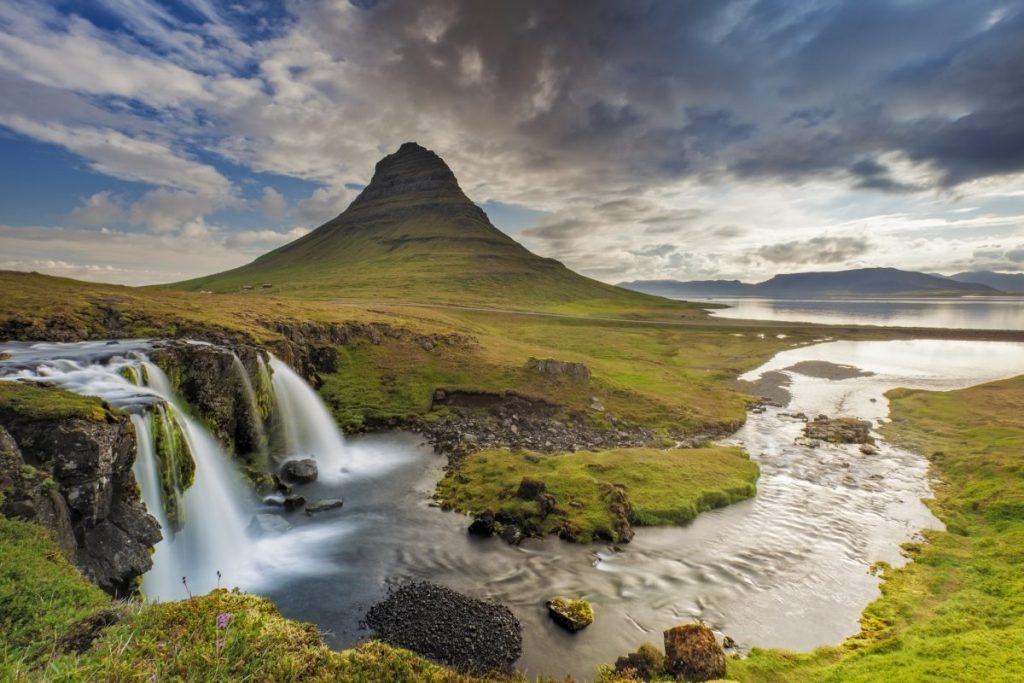 Iceland's landscape can be so extreme that visitors frequently feel like they are traveling to an alien world. For example, much of Iceland's southern coast has experienced glacial flooding, resulting in vast swathes of exotic black sand beaches. One of the most famous of these beaches is Reynisfjara. Visitors should be wary of powerful waves, but the view of sparkling black sand and stark geologic features such as the basalt pillars of Reynisdrangar just beyond the beach make this an amazing photo opportunity. 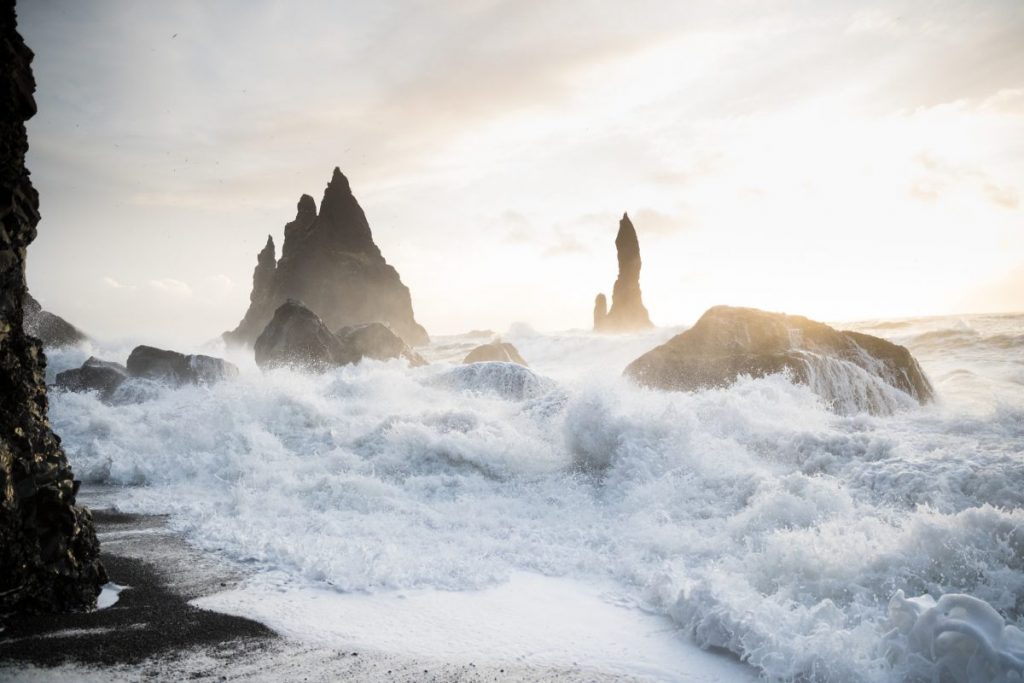 Vatnajökull, Europe's largest glacier, and its surrounding area make up Iceland's largest national park. One of the most popular spots to visit in this park is Jökulsárlón Glacier Lagoon. This is a great place to spot icebergs, which fill the lagoon year-round after calving from a larger glacier. Don't miss nearby Diamond Beach, a gorgeous black sand beach so dotted with sparkling ice crystals that it looks like it is covered in precious gems. 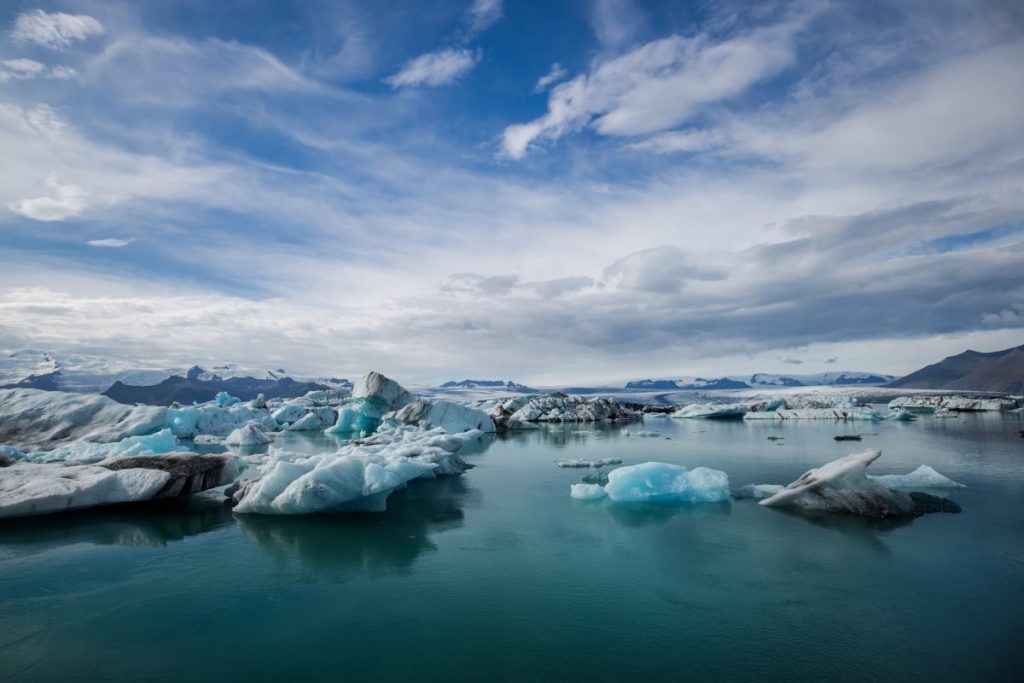 Chance are that if you've seen travel pictures from Iceland, you have seen a shot of Gullfoss, an iconic waterfall that is one of Iceland's most-visited sites. Gullfoss, which means "Golden Falls," found in the Hvítá river canyon in south-west Iceland. Gullfoss could actually be considered two separate waterfalls since the falls traverse two stages on their way down. The first drop is over 36 feet, followed by the second drop which cascades down almost 69 feet. As one of the highlights on the famous Golden Circle tour, Gullfoss is definitely a "can't miss" destination when visiting Iceland. 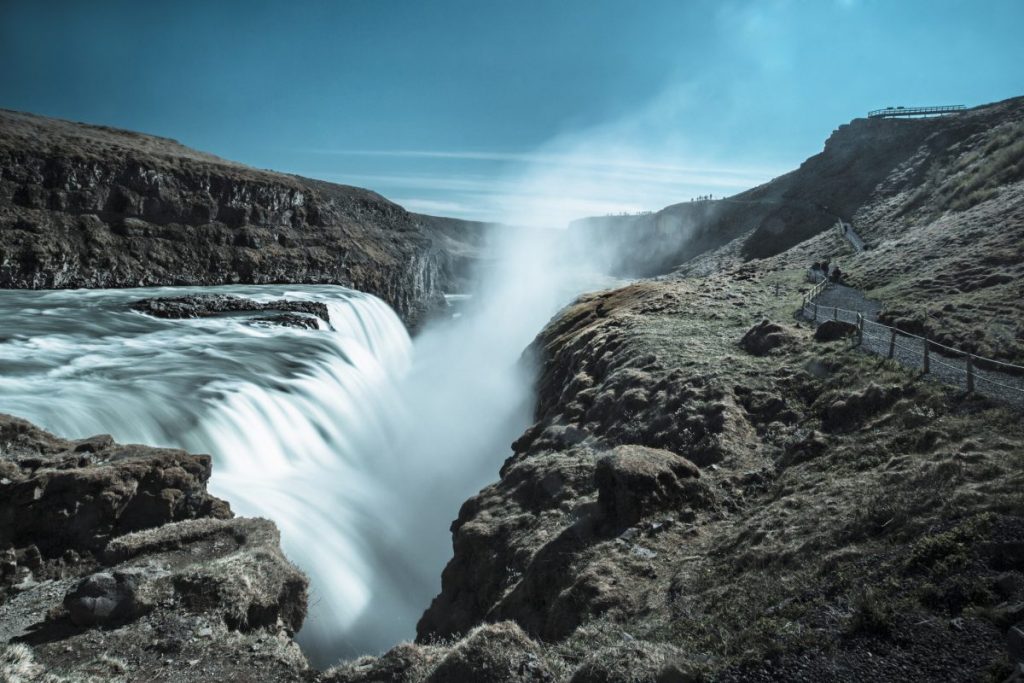 The Blue Lagoon should definitely make the list for your Iceland trip if you are looking for some R&R. This geothermal spa is a very popular spot for visitors due to the milky blue water rich in minerals and the opportunity to relax your tired muscles in hot water even when there's snow on the black lava rocks around you. You may be surprised that the Blue Lagoon is actually a manmade lake, but it is filled with seawater that is heated up to by a nearby lava flow. After your soak, pamper yourself in the nearby resort which features spa treatments, a fitness room, saunas, and a highly-rated restaurant. 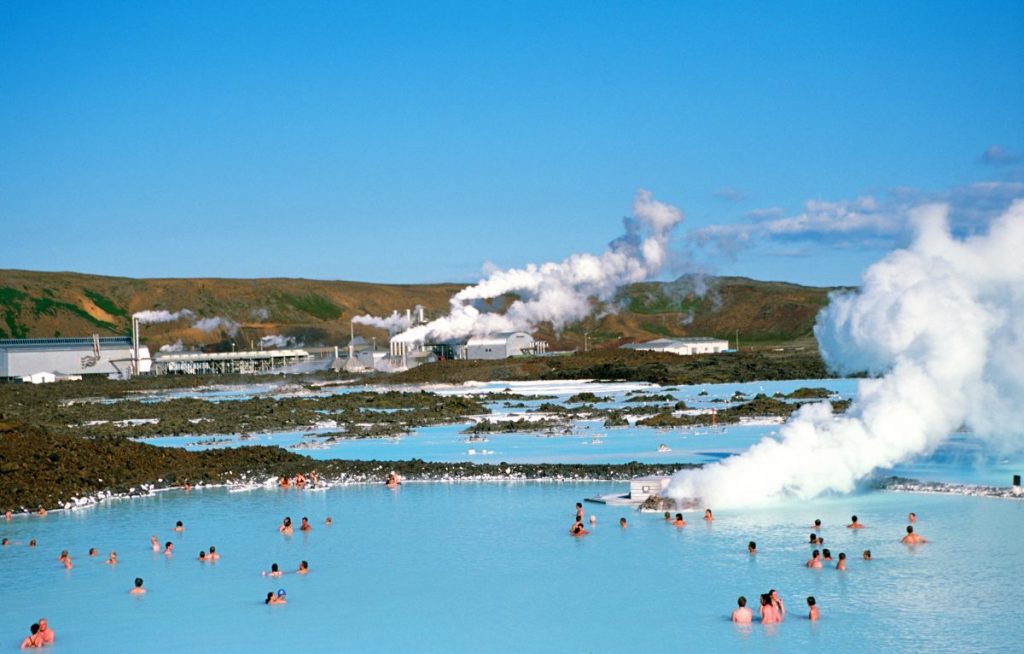 When in Iceland, don't miss an opportunity to visit a UNESCO World Heritage Site, Þingvellir National Park. Another stop on the Golden Circle, this park has both historical and geologic significance making it worthy of such a designation. Thanks to the complicated and interesting history of the government of early Iceland, Þingvellir is the original site of the world’s longest running, still ongoing parliament. However, many choose to visit this national park due to its amazing location straddling the Mid-Atlantic Rift. Part of Iceland is on the North American tectonic plate, while other parts of it are located on the Eurasian plate. Iceland is the only place in the world where the rift is visible above sea-level, with the best views of the plate edges in Þingvellir. 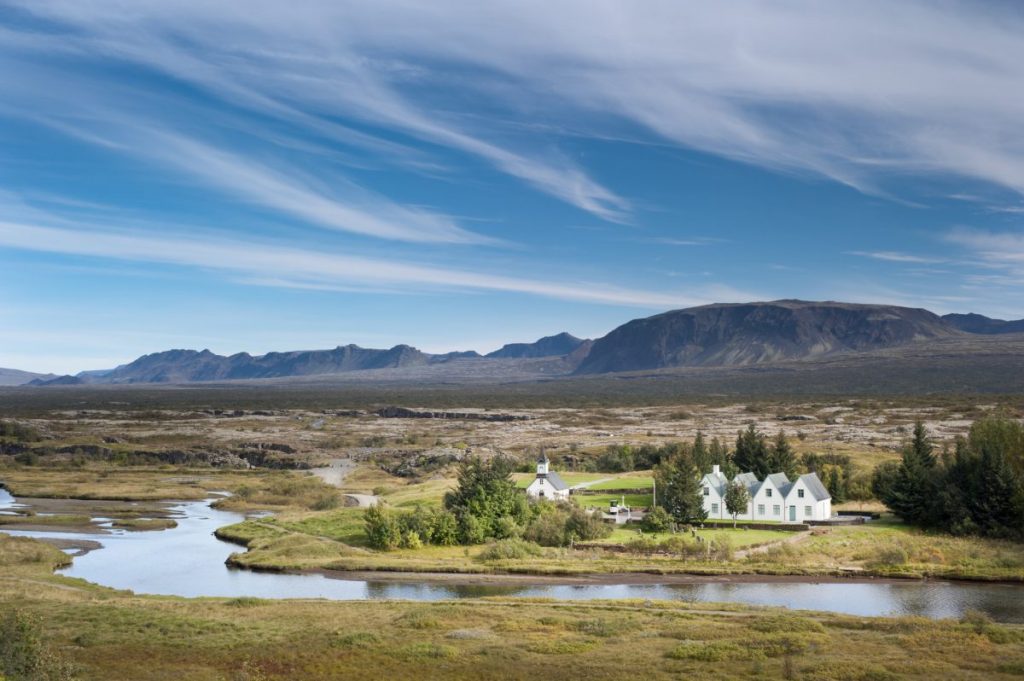 The last stop on the Golden Circle, Geysir is a famous region of hot springs and boiling mud pits in the geothermal area of Haukadalur Valley, found in south-west Iceland. The English word geyser actually comes from the famous hot springs of this area. The popular Strokkur geyser erupts every 5-10 minutes, shooting water up to 100 feet in the air. The newly opened Geysir Center offers exhibits and informative presentations year round. 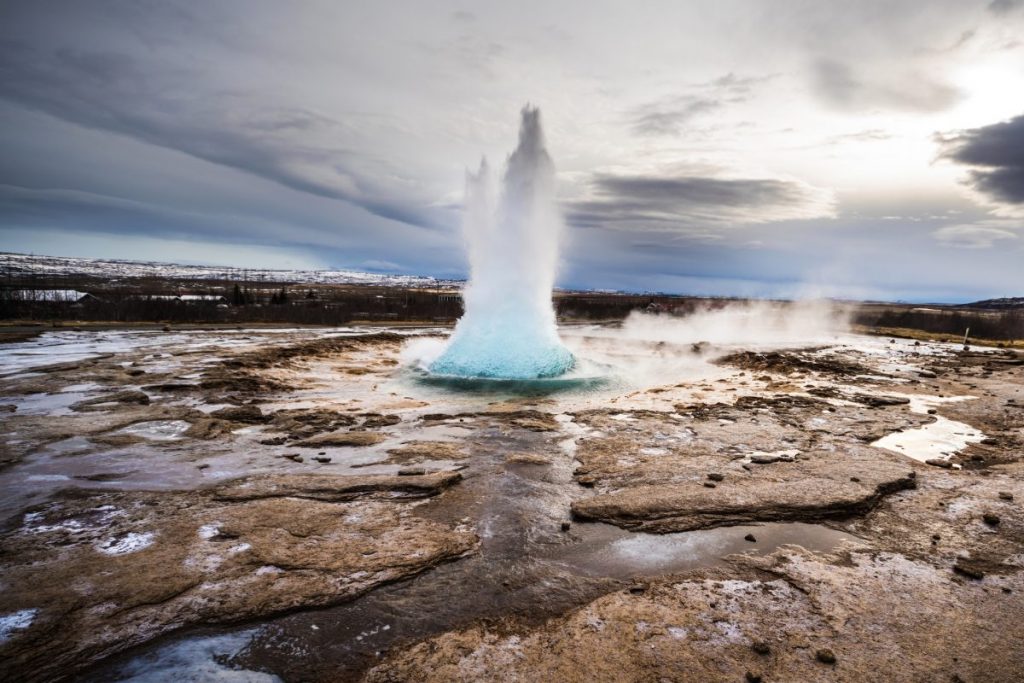 Route 1 in Iceland is better known by its nickname, the Ring Road. This road travels 828 miles around many popular tourist destinations in Iceland, connecting the capital and largest city Reykjavík to the second-biggest city Akureyri in the northern part of the country. While traveling the Ring Road some of the sites, you will go by including striking waterfalls like as well as epic glaciers like Mýrdalsjökull and Eyjafjallajökull. 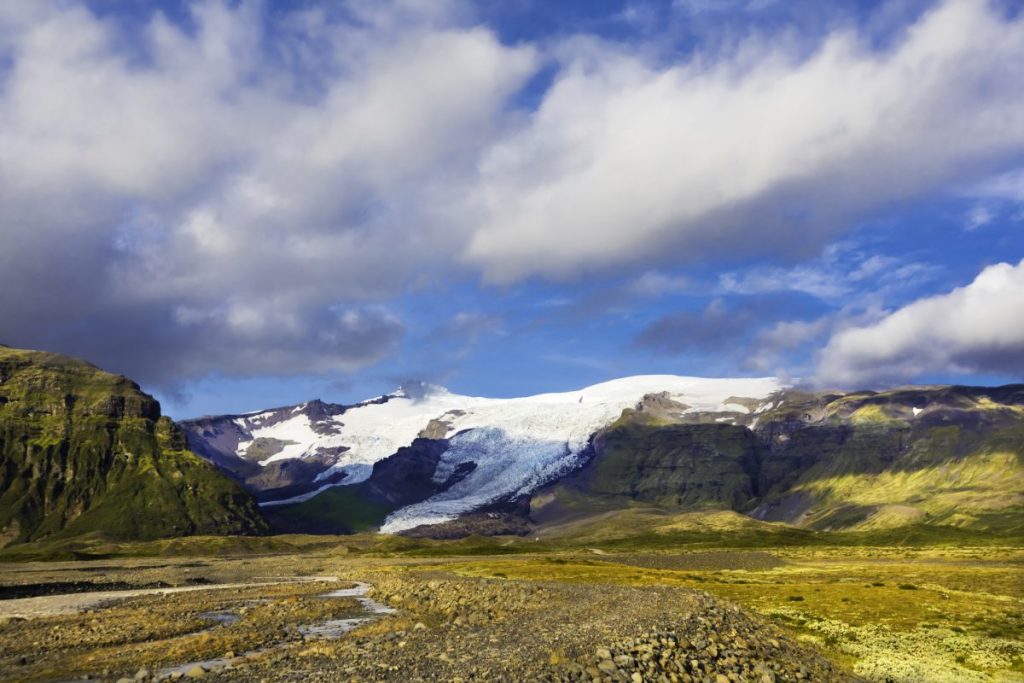 Thanks to the location of the Keflavík Airport, Iceland's main hub for international travel, nearly every journey to Iceland begins in the country's capital city of Reykjavík, one of the only cities in the world that runs on geothermal power. Most of the population of Iceland, around 120,000 people, lives there too. Start your journey at the city's visitor center near beautiful Lake Tjornin on the city’s west side. Don't miss the National and Saga museums to learn about Iceland's thrilling Viking heritage. Shops and restaurants abound in Reykjavík, plus there are many tour companies that can assist you in visiting some of Iceland's other destinations. 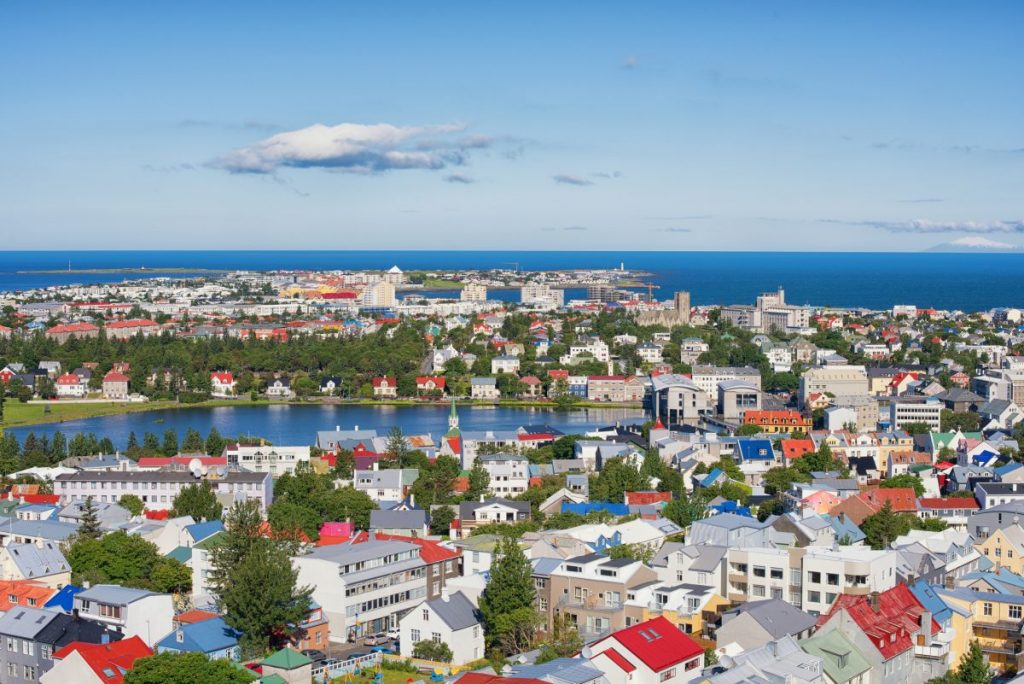 If you want to make sure you've seen the most impressive natural features that Iceland has to offer, don't miss Skaftafell, a region in Vatnajökull National Park known for its superlatives. Here you can view Iceland's highest peak, Öræfajökull, which is also its highest volcano; Iceland's biggest and oldest forests, and the tallest waterfall in Iceland, Morsárfoss, which cascades more than 744 feet. It's also the home of popular site Svartifoss, a waterfall framed by splendid dark basalt columns. Make sure to get some photos to share on social media when you get home. 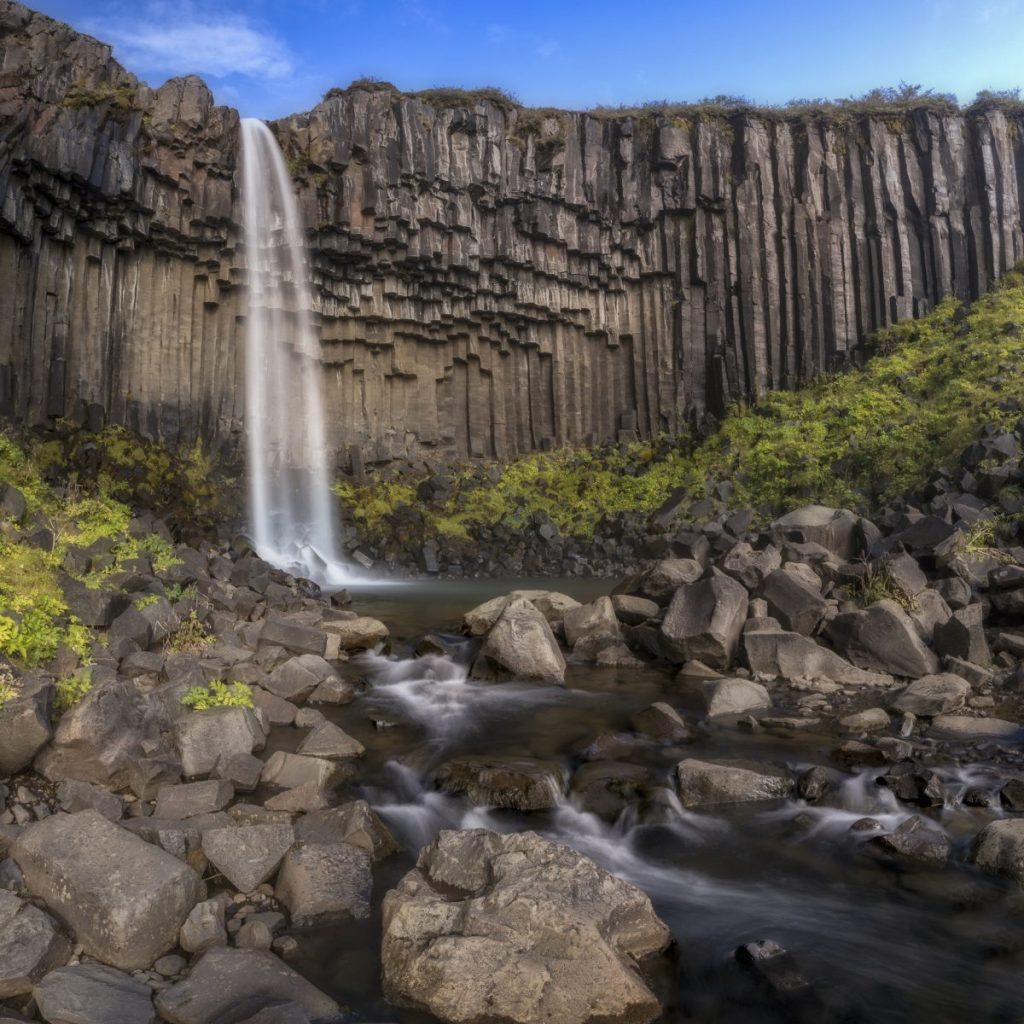