Once known as Saigon, Ho Chi Minh City is now one of the most dynamic cities in the world. In 2017 alone, Ho Chi Minh City saw six million international visitors. Though the city is hectic, it is full of spirit and culture. The city is home to everything a visitor could desire, from hotels with live music to tasty street food in relaxing parks. Motorbikes rule the streets, and many companies offer authentic motorbike tours for any visitors who desire them. Once you’ve visited, you’ll understand why Ho Chi Minh City is the Pearl of the Far East.

Weather and When to Visit

Ho Chi Minh City has a tropical climate with an average humidity of around 80 percent. The rainy season usually runs from May to November with April and May being particularly hot. The area cools down in the winter, though it rarely drops below 60 degrees Fahrenheit. Ho Chi Minh City remains a popular destination through most of the year. However, depending on what you’re looking for on your trip, you may wish to not visit the city during Tết. During this Vietnamese Lunar New Year celebration, many of the city’s residents return to their hometowns to celebrate. 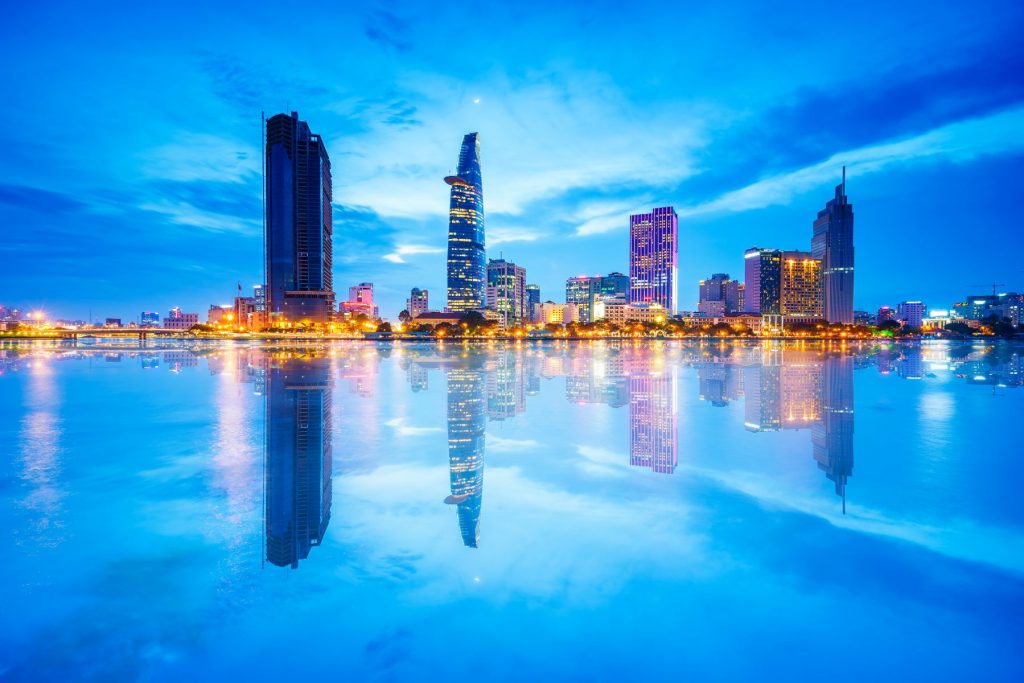 One of the best ways to explore the hectic and busy streets of Ho Chi Minh City is via a motorbike. Many of the locals prefer motorbikes to cars, and the streets are often most accessible to motorbikes. If you can’t drive a motorcycle, don’t worry. Many tour companies offer full-city motorbike tours. Often, these tours begin in the evening when the city is at its most beautiful. As the sun sets, many street vendors are at their most active as they set up on sidewalks across the city. 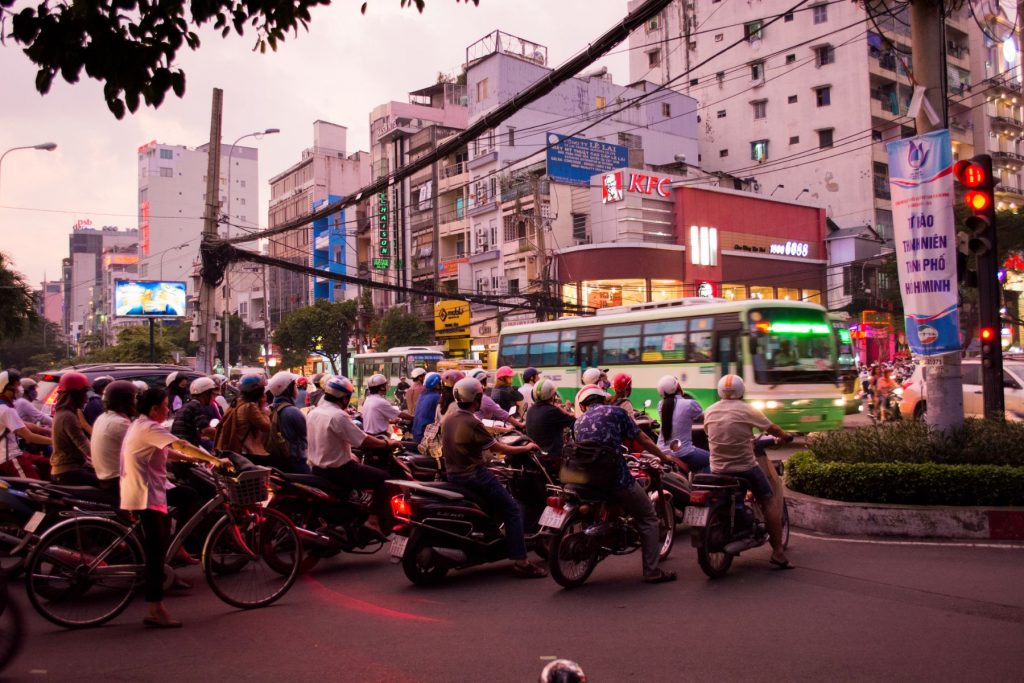 A Walk Through History

Many of Ho Chi Minh City’s top landmarks sit within a few streets of each other throughout District 1. Reunification Palace made global history in 1975 when a North Vietnamese Army tank crashed through its main gate, ending the Vietnam War and precipitating the Fall of Saigon. Two of the tanks from the war sit in the palace grounds. The palace overlooks Le Duan Boulevard, which connects to the historic Notre Dame Cathedral and the city’s Central Post Office. Both buildings are remnants of French colonial history in Ho Chi Minh City and contain many artifacts from that time. 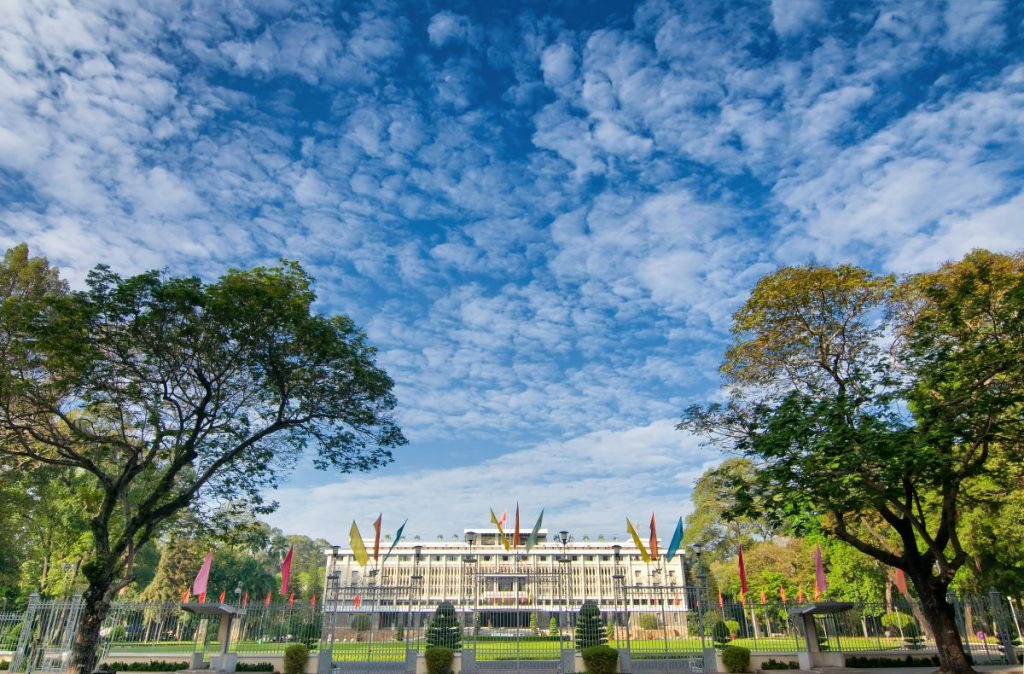 Various empty office buildings and apartments in District 1 have found new life as shopping centers and stores. 22 Lý Tự Trọng Street was once an apartment complex that was an assembly point during the Fall of Saigon. Now, the building houses a variety of businesses, including a bank, offices, and much more. 42 Nguyen Street was a decades-old apartment that now contains an array of cafes and restaurants on each floor. Both areas have become popular cultural spots for locals and tourists alike. Many fascinating stores line the streets around the 3A Station and in the areas around Dong Khoi street. 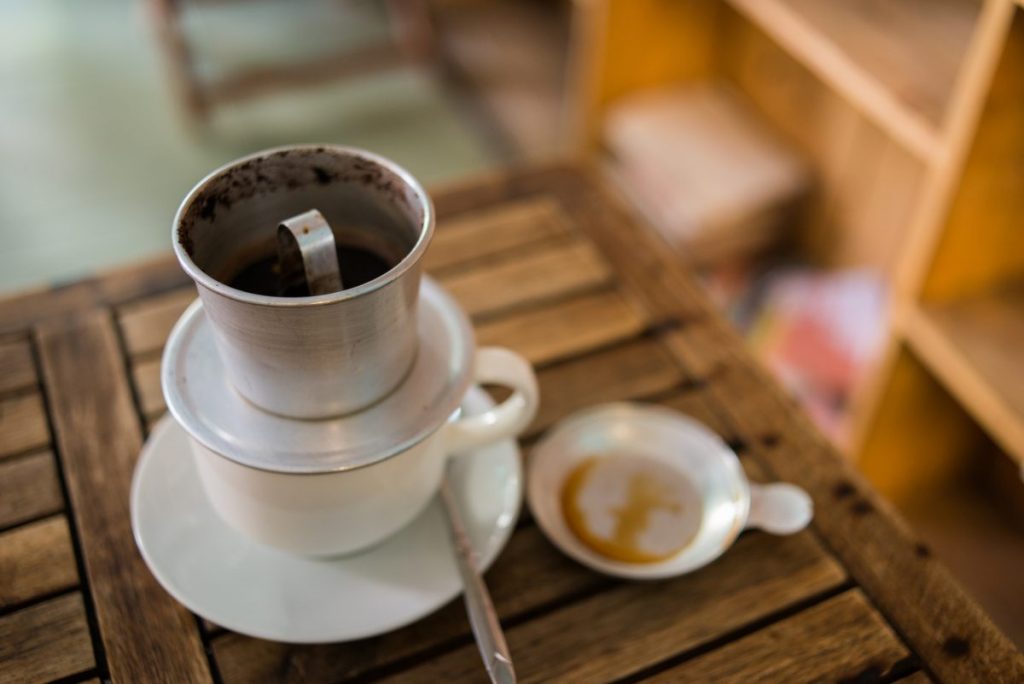 Much of District 5 and portions of Districts 6 and 11 belong to Ho Chi Minh City’s Chinatown. The Chinese quarter, known as Cho Lon, offers a number of areas to visit. The Binh Tay Market is a gigantic trading center full of stalls and stores for all types of goods. Cho Lon also represents a merging of cultures by acting as the home to the Thien Hau Pagoda and the Cho Lon Mosque. The pagoda is a temple where residents can pay their respects amid clouds of incense to the Chinese sea goddess, Mazu. 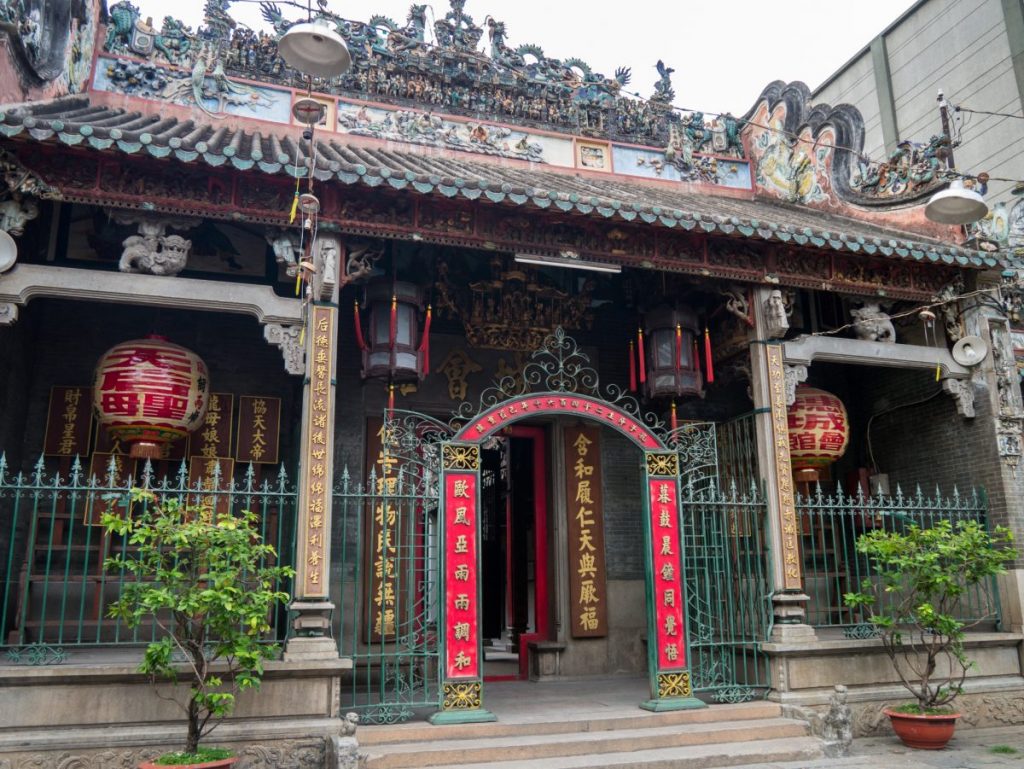 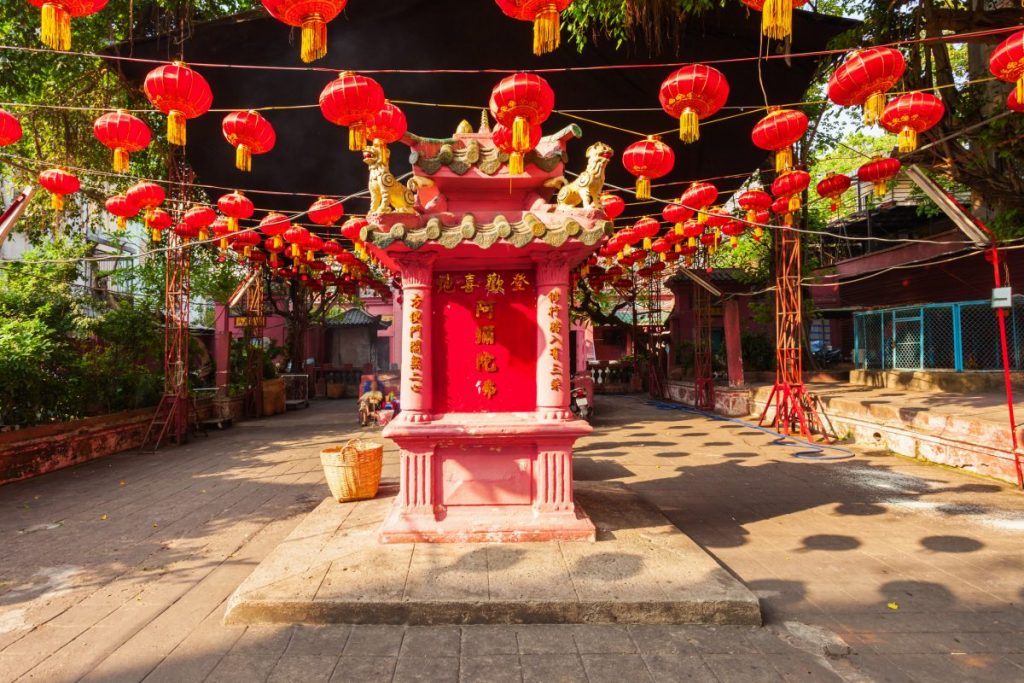 Because of Vietnam and Ho Chi Minh City’s long histories, there are many museums for visitors to learn about the area’s past. One of the most popular and iconic museums, the War Remnants Museum, is one of the few museums in the world that conveys just how brutal war can be on a country’s citizens. If you’d like a less dire taste of history, the Ho Chi Minh City History Museum hosts a collection of artifacts from various past Vietnamese cultures. These artifacts date from the Bronze Age in 2000 BCE to sixth-century CE. 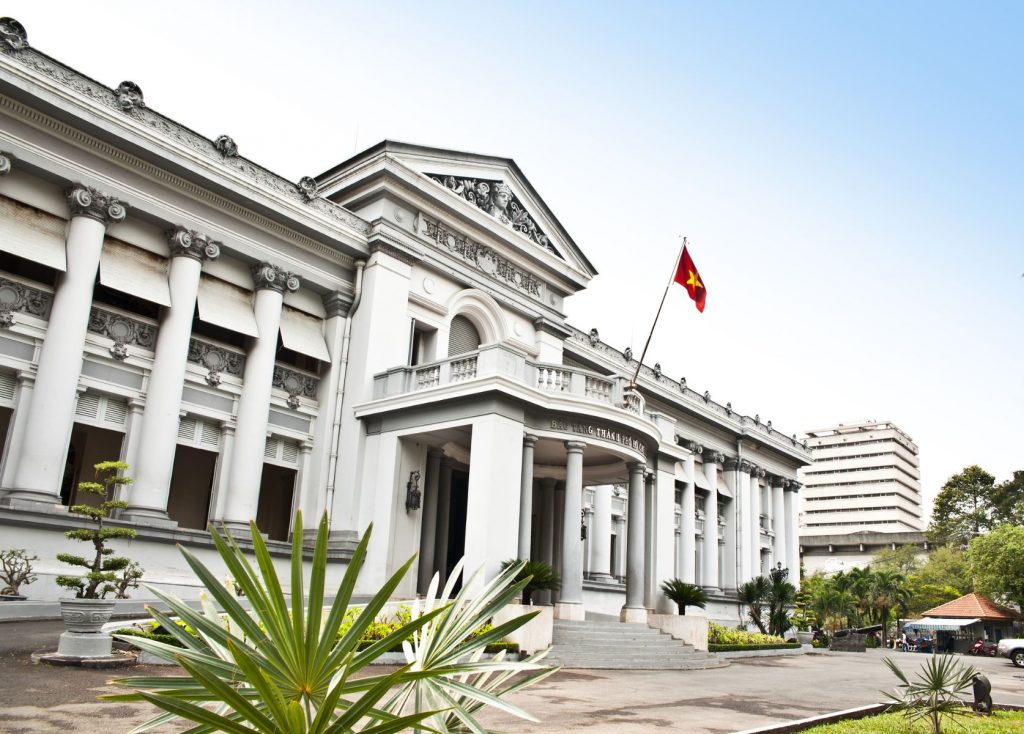 Fans of art and music will adore Ho Chi Minh City. The Fine Arts Museum building itself is a work of art with gorgeous tile floors and stained glass windows. Along with many contemporary and modern art pieces, historical works also hang from the museum walls. If you’re in search of live music, it’s never far away in Ho Chi Minh City. Many of the bars and hotels in the city feature live music nights for a variety of genres. Regardless of whether you’re looking for calm background music or a rocking rooftop band, there is a place for you. 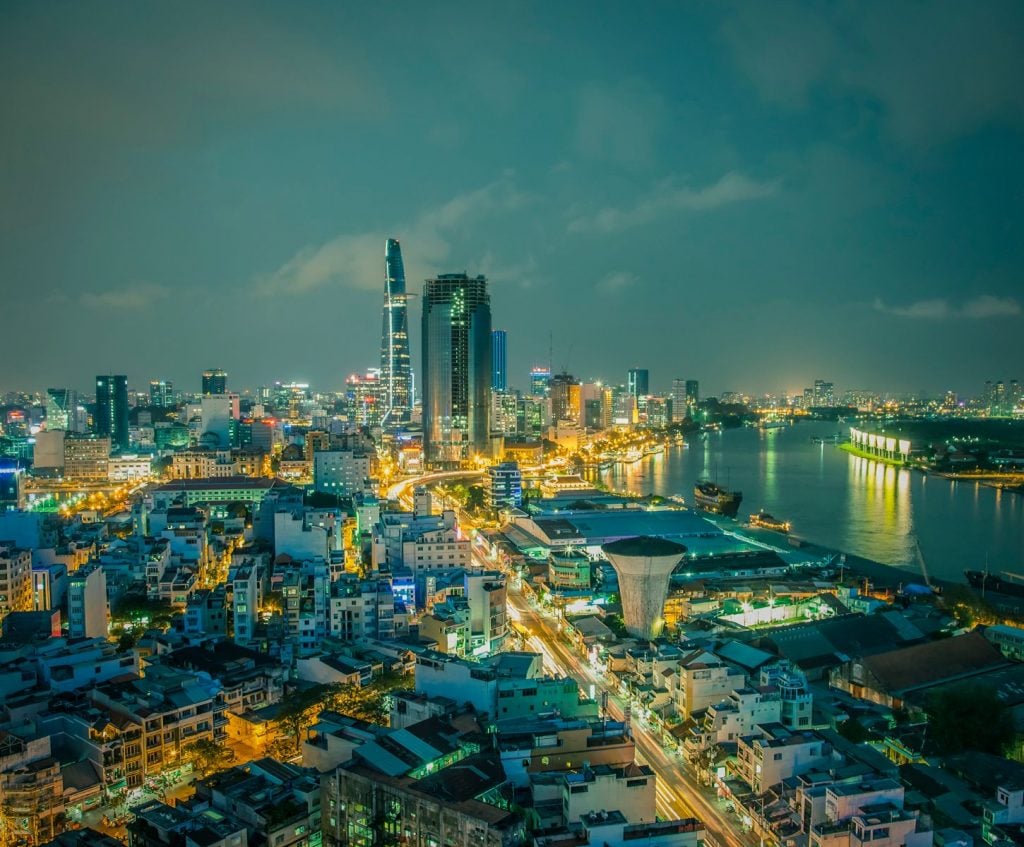 Ho Chi Minh City has some of the best street food in all of Vietnam. Residents and tourists alike delight in roadside meals from the local street vendors. Though there are many options, some of the best are the bánh mì sandwiches. Often, these sandwiches contain a fusion of meats and vegetables such as pork sausage, coriander, cucumber, and cabbage. There is a diverse assortment of possible condiments and fillings. Other options include the savory, pancake-like bánh xèo or the rice dish cơm tấm. 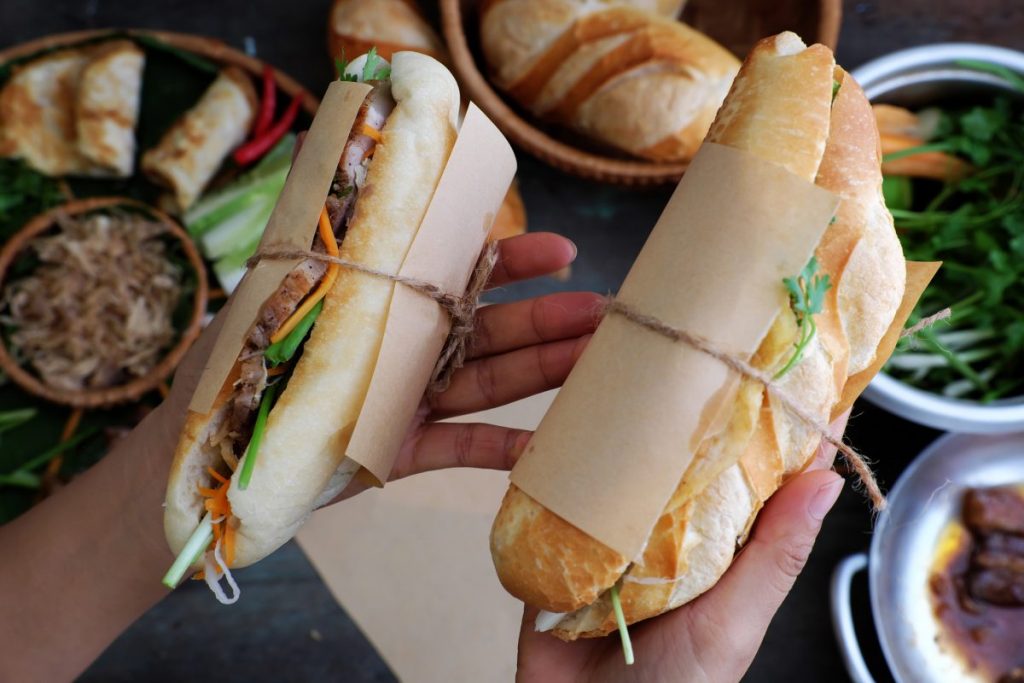 Beneath the Củ Chi District in Ho Chi Minh City lies an immense network of tunnels that saw extensive use during the Vietnam War. The Củ Chi tunnels connect to a significantly larger system of tunnels that cross most of the country. Currently, there are two sections of the tunnels open to the public. The first area is available just outside of Ho Chi Minh City in the village of Ben Dinh. Most tourists opt to take a bus tour to reach the tunnels. Both sites have areas where visitors can pay to fire AK-47s and other automatic weapons on a small gun range. 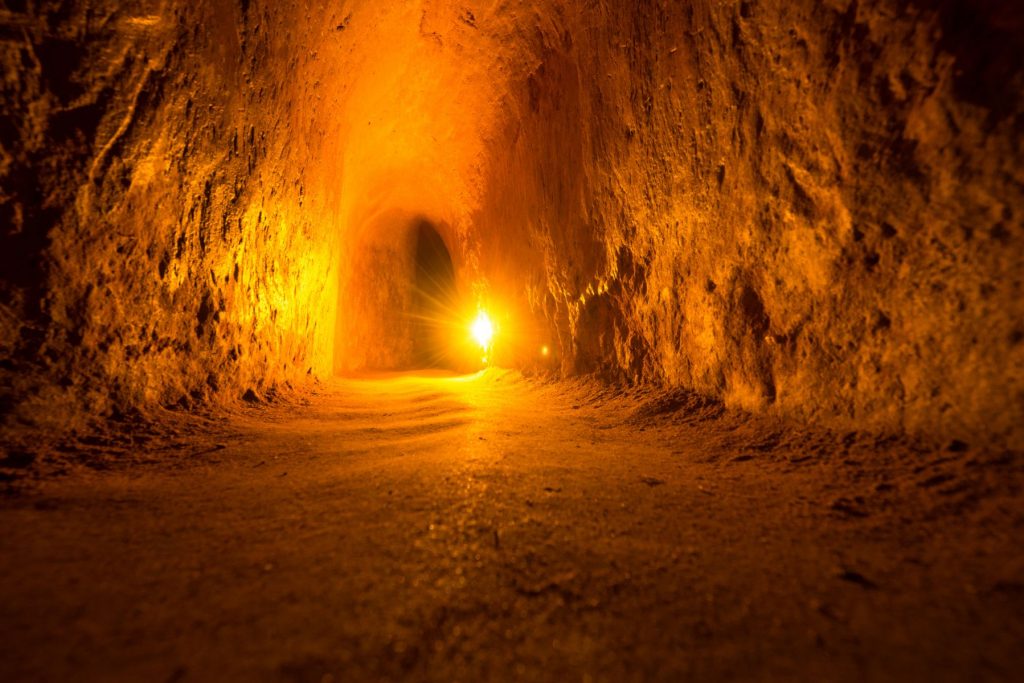