Thailand's capital city is a top destination in Asia with dozens of places to see and experience that will keep travelers of all ages entertained. As the biggest city in Thailand, Bangkok is a unique component of the Asian country with sites you won't see anywhere else in the world. The busy city hosts a former royal palace, magnificent temples, floating markets, several massive malls, including some with high-end, designer shops, and nightlife spots that are the talk of Southeast Asia.

The Grand Palace is a busy, tourist attraction. But, the 2.35 million square foot destination is well worth the crowd. Inside you can see the palace which includes the Outer Court, the Central Court, and the Inner Court. One of the major destinations inside the compound is Temple of the Emerald Buddha. Although the palace isn't the home of Thai Royalty anymore, only a few sections of the Central Court are open to the public. The Temple of the Buddha is considered the most sacred Buddhist Temples in the entire country. Visitors should know that the Palace's temples have strict dress codes to follow and guests not adhering to the requirements will not be allowed to enter. 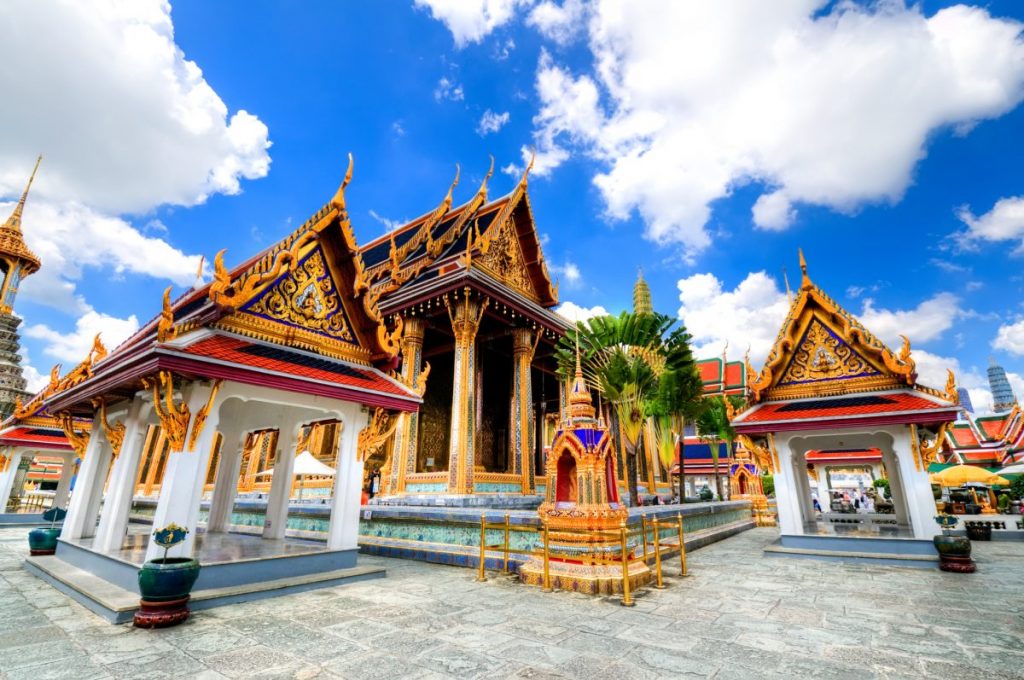 Experience the Temple of Dawn

Wat Arun or the Temple of Dawn is one of the more unique Buddhist places of worship in Bangkok. Built on the west bank of the Chao Phraya River in 1768, the temple's tower is covered with millions of small pieces of fine, colorful Chinese porcelain. On the site's grounds, you'll find several other buildings that contain various shrines, sculptures, and images of the Buddha. For the best views of Wat Arun, visit at sunrise or sunset to see the beautiful colors sparkling in the sun along the river. 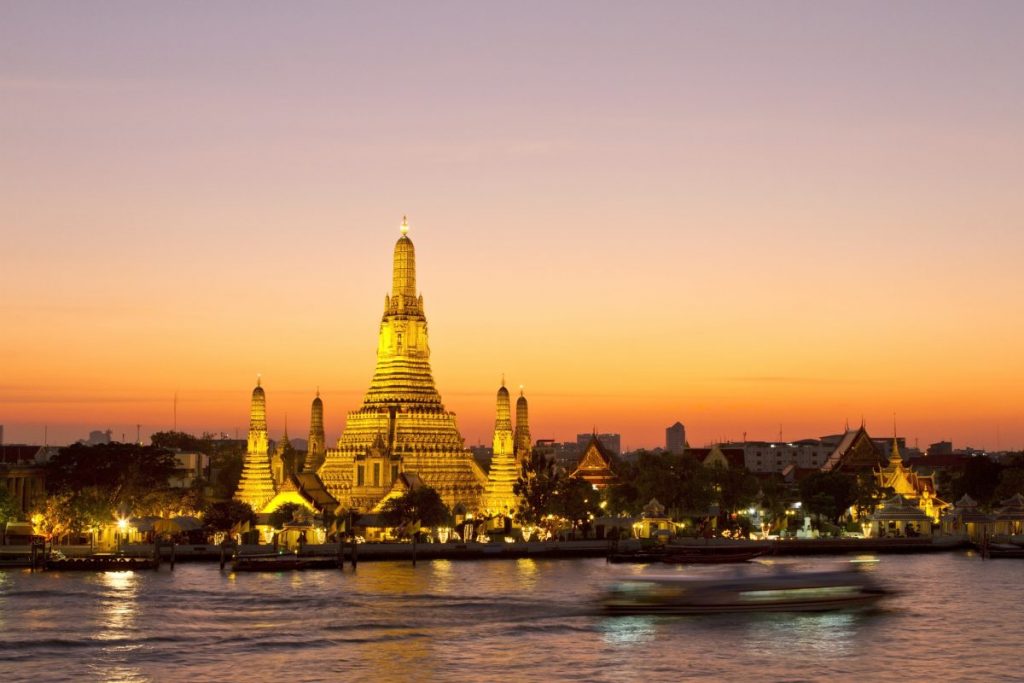 Wat Pho or the Temple of the Reclining Buddha is a must-see destination in Thailand. The temple features a 46 meter, gold-plated Buddha statue that's laying down. The figure depicts the Buddha passing into the final Nirvana following death. One hundred eight bronze bowls that line the walls of the hall. Visitors can purchase a bowl of coins to drop in the bowls for good luck as they pass through the area. Built a short time after the Grand Palace in 1781, Wat Pho sits just south of the Royal compound and Emerald Buddha. This makes it easier for travelers to experience two of the most important temples in the country on the same trip. 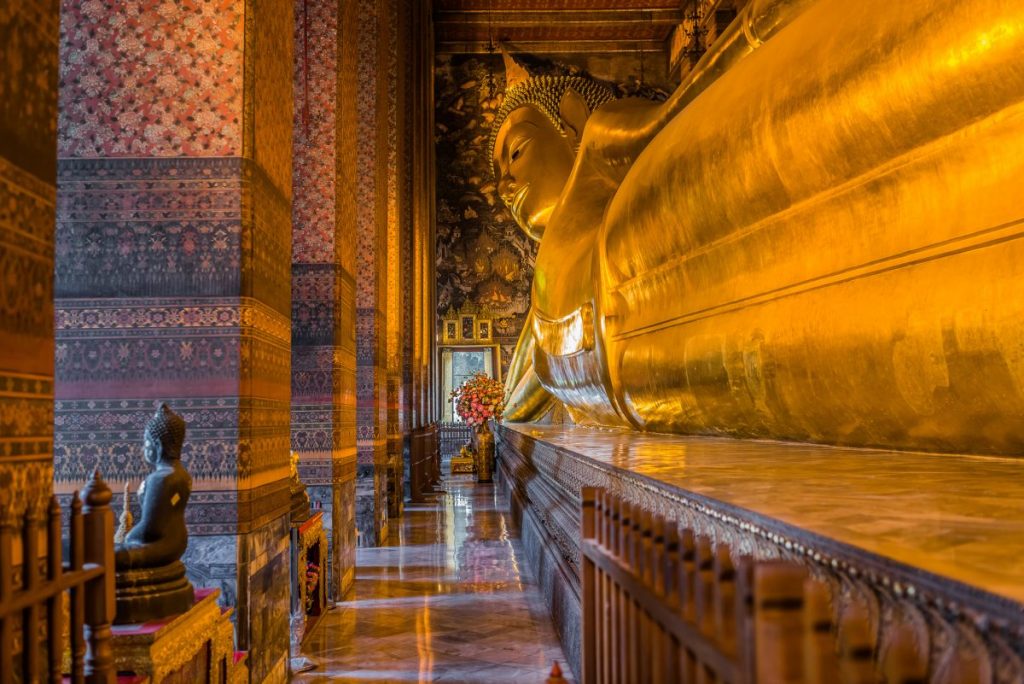 Go Shopping at the Floating Market

There are dozens of floating markets in Bangkok are a unique experience. These farmers markets on beautifully crafted boats are filled with tropical fruits, vegetables, and different seafood varieties. Plus you'll find boats offering fresh Thai dishes such as pla pao which is a salt-crusted fish or mungbean noodles that they will prepare right in front of you. Don't forget to grab a fresh, coconut drink to go with your meal. Other items you'll find for sale include pottery, t-shirts, candies, flowers, souvenirs such as building replicas for tourists to take home. 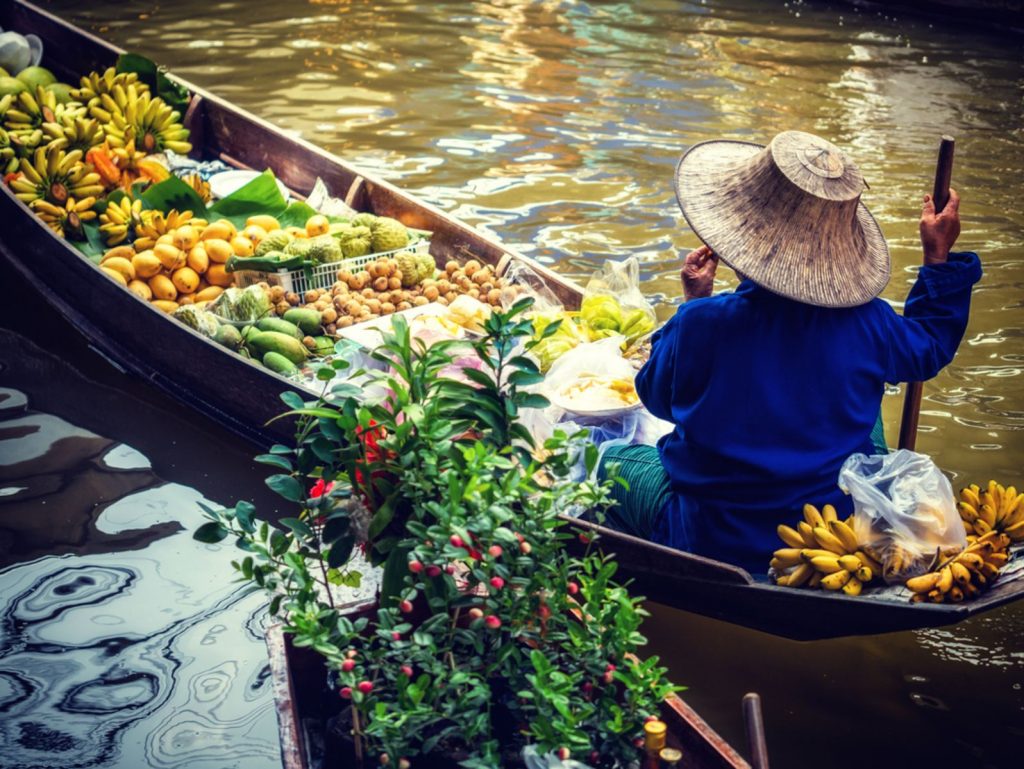 Take a Boat Trip Down the Chao Phraya River

A trip to Bangkok isn't complete without a boat ride down the famous Chao Phraya River that runs through the city. While it's valuable for the country's commerce, it's also a popular recreation area for residents and tourists. Also known as the River of Kings, many of Bangkok's attractions sit along its banks such as the Grand Palace, the Temple of the Emerald Buddha, and the Temple of Dawn. There are several top boat tours you can take to view these destinations from the river such as Express Boat River taxis that will shuttle you to and from different piers on weekends to daily river tours specific for tourists. 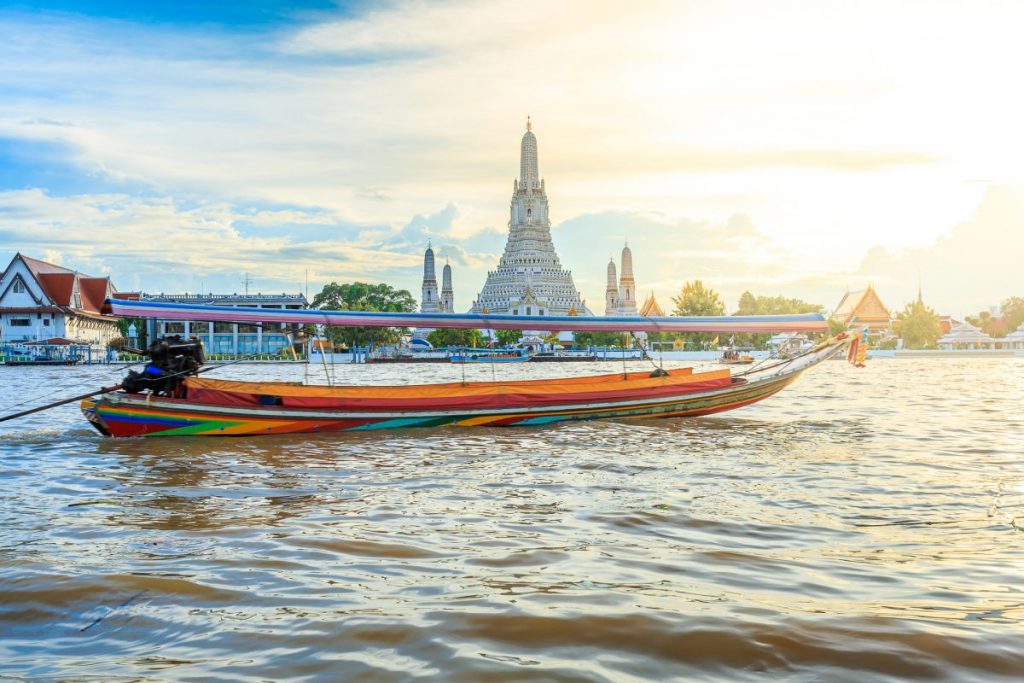 Stroll Through One of the Malls

It may sound odd, but, malls or shopping centers are activity hubs in Bangkok with some 100,000 visitors or more daily. Many visitors are shocked at the sheer size of these mega shopping centers. One of the largest ones in the city is Siam Paragon which is five stories and includes an IMAX theater, a luxury car showroom, several luxury clothing stores, an entire floor of restaurants, the largest aquarium in Southeast Asia, and a connected hotel. Another popular choice is the nearby CentralWorld shopping complex that offers seven floors with more than 500 stores, 100 eateries, a kids' zone, and even a luxury foods supermarket. 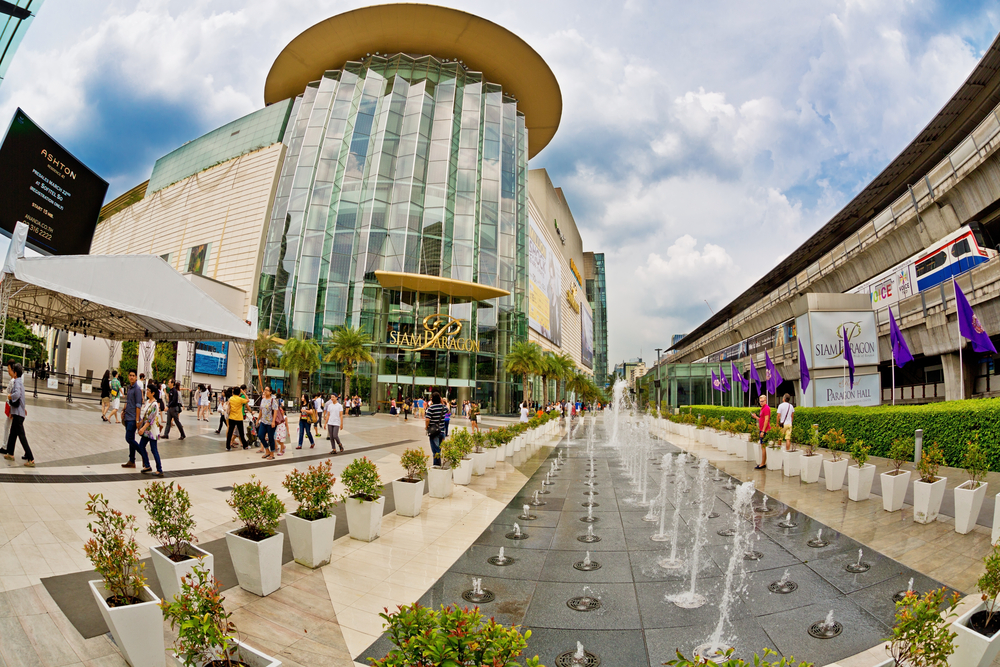 See the Sights at the Royal Barge Museum

There's more to see than temples, statues, riverboat rides, shopping centers, and floating markets in Bangkok. Cultural lovers will enjoy the beauty of the Royal Barge Museum. Located along the canals that connect to the Chao Phraya River, the boat museum features eight of the ornate royal barges that once traveled the waterways as the main form of transportation in the ancient city carrying the king and royal family. There are more than 50 of these intricately designed ships, but, they keep most of them in storage except for special occasions where visitors can see them on the open water in all their glory. 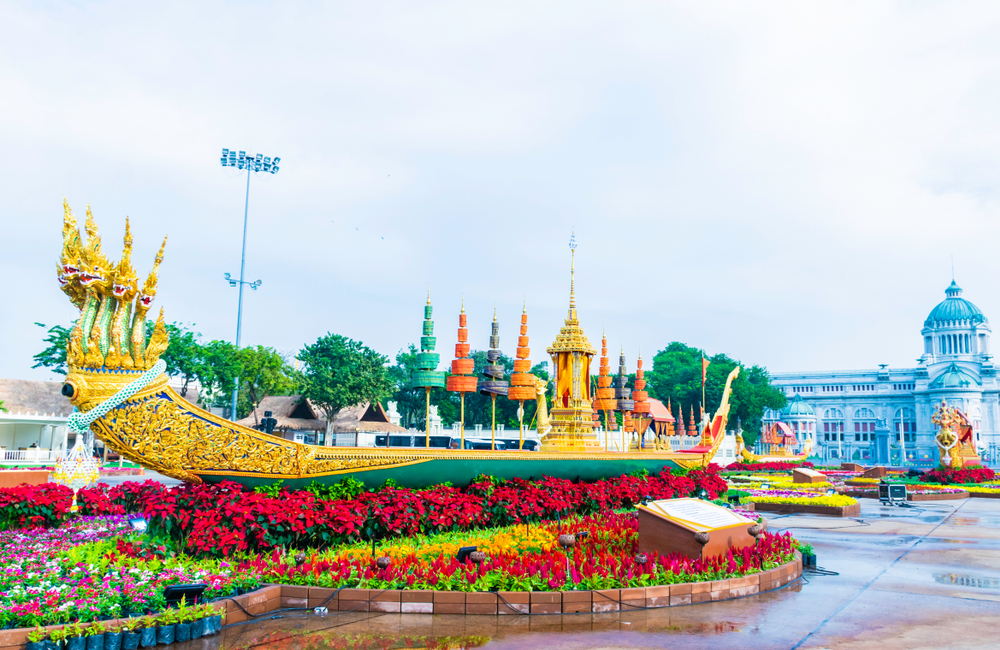 Hang Out with the Lizards in Lumpini Park

One of the more casual ways to spend a day in Bangkok is in the city's Lumpini Park that offers beautiful open spaces, playgrounds, walking paths, picnic areas, and an artificial lake where peddle swan boat rentals are available. Here you can relax and hang out with the many lizards that call the park home. If you don't want to bring your own food from one of the floating markets around the city, there's no need to worry. The park has food vendors near the Rama VI statue cooking up traditional Thai food. 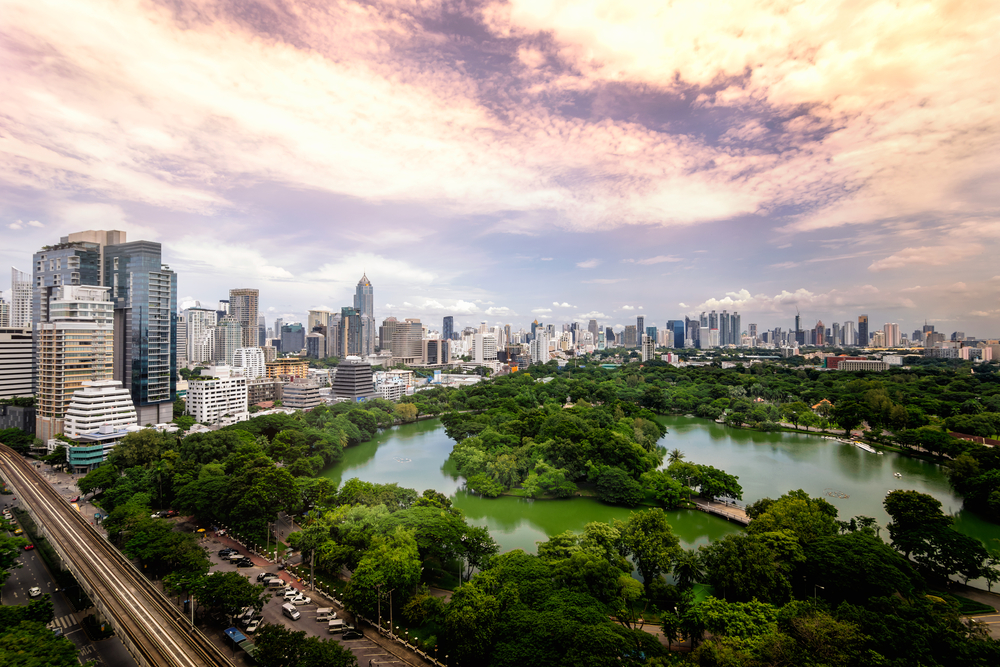 For the sports lover, you can't leave Bangkok without catching a Muay Thai match. The best way to experience one of these traditional fights is at the Rajadamnern Stadium which has been hosting the best matches in the city since 1945. Most events feature seven to nine match ups that last up to five rounds. At the end of each match is a Wai Fru Ram Muay which is a ceremonial dance. Shows are held every Sunday, Monday, Wednesday, and Thursday. 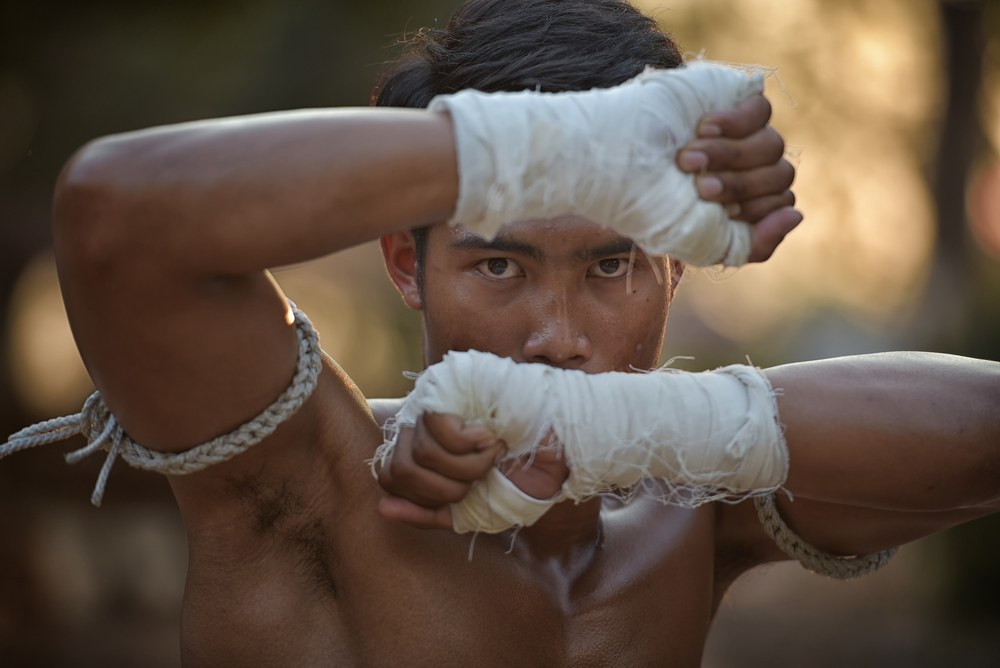 Thai puppet shows are an art form that dates back more than 300 years. These are a widely different experience in the Asian country than in Western countries. The puppets are just under 3.2 feet and take three puppeteers with a rope and pulley system to control each one. Each show includes music, dancing, and a story. You can find a puppet presentation at the Artist's House, a 200-year-old venue in Bangkok, as well as at some festivals around the city. 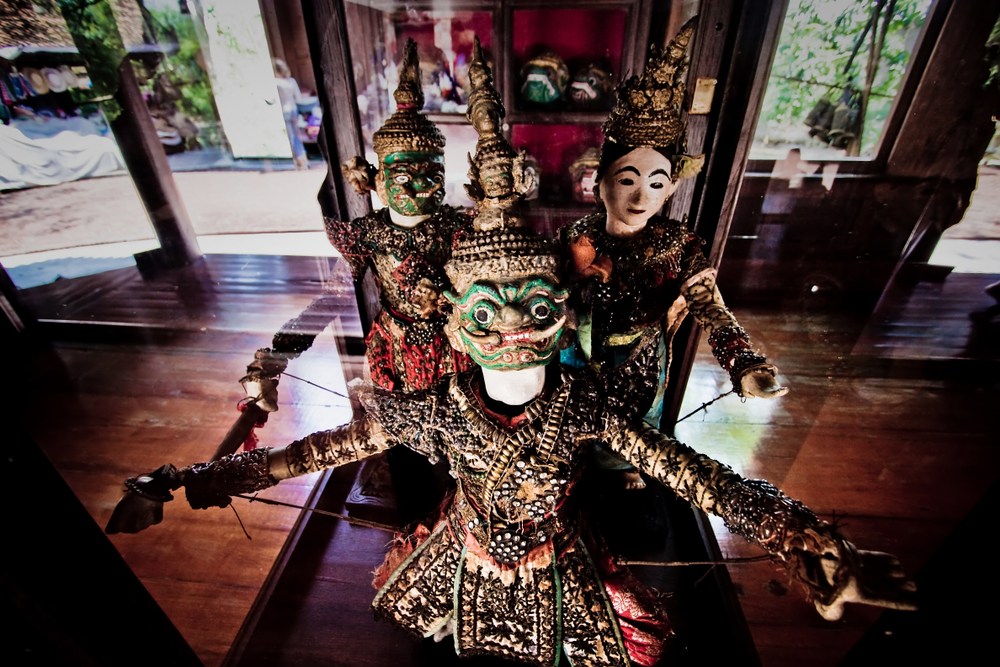