10 Things You Must Do In Santorini

Santorini is a Greek Island in the Aegean sea and part of the Cyclades island group. Called Thria by the locals, Santorini was once home to the thriving Minoan Civilization. Because of a huge volcanic eruption, the island was abandoned by the Minoans. Today the island has a crescent moon shape formed by the destruction done by the eruption. Popular with honeymooners, Santorini is a romantic destination for grown-ups. Most visitors stay in one of the two main towns of Fira and Oia, wandering between whitewashed buildings with blue domes and admiring the stunning scenery.

Watch A Sunset Over The Caldera

At the top of the list for most visitors to Santorini is watching a sunset across the Caldera. The island is a crescent moon shape, and the main towns of Fira and Oia face west towards the setting sun. If you are lucky enough to get a restaurant table with a sunset view, then keep hold of it or someone else will likely jump in. Although you can admire the sunset from plenty of spots along the crater edge, there are popular areas that get very crowded. Avoid the windmills if you want a quiet spot to appreciate the beauty in peace. 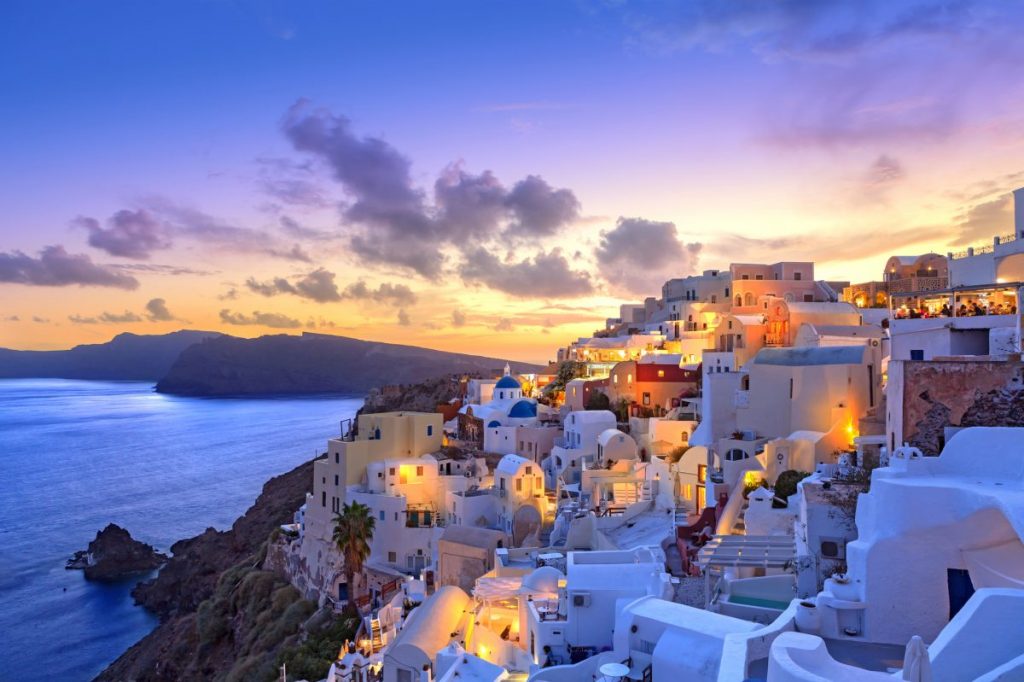 Santorini was once home to the Minoan civilization, famous for the minotaur in the labyrinth legend. When the volcano at the center of thir island exploded 3,600 years ago most of the island was destroyed leaving the shape of modern Santorini. There are a few ruins on parts of the island that escaped destruction, and the Akrotiri site has a fascinating collection of ruins and artifacts to see. One thing you won't see much of, however, are skeletons of the ancient Minoans. It seems from archaeological evidence that the inhabitants knew the volcano was ready to blow and they evacuated. How they guessed the impending doom isn't known, but likely there were violent earthquakes before the eruption that frightened people away. 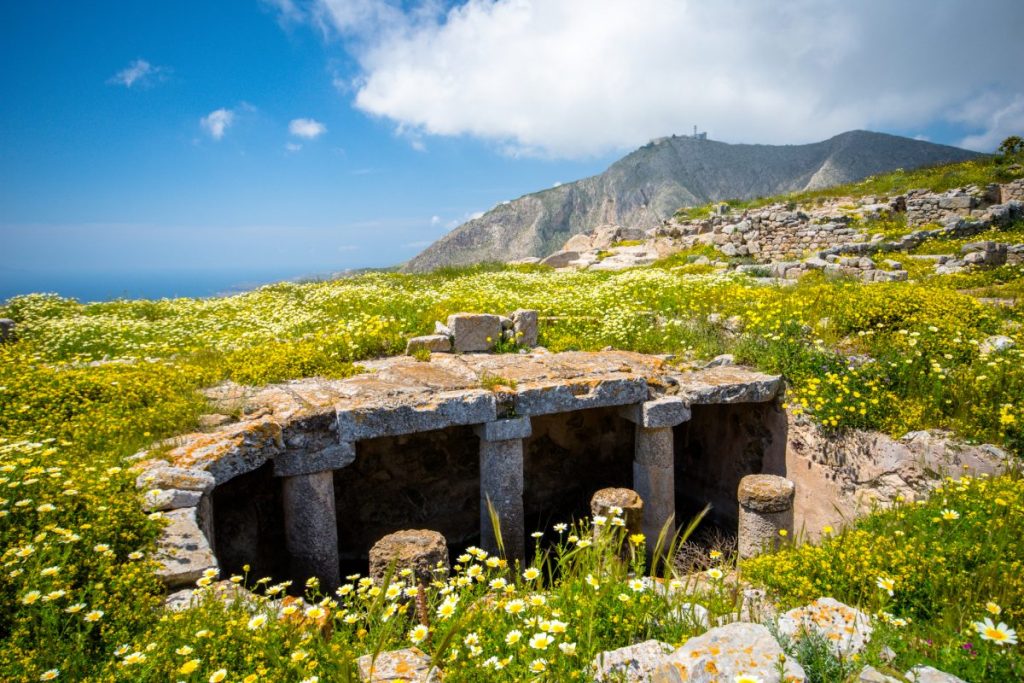 Unsurprisingly for a volcanic island, there are volcanic beaches. Due to their composition of old basaltic lava, the beaches are black. There are areas of red sand too, caused by natural iron in the rock. Because the grains are coarser than regular sand, you can't make sandcastles on Santorini beaches. However, they are popular with sunbathers even in cooler months because black sand warms up quicker than golden sand. The sea off the beaches is sparklingly clear because the coarse sand sinks quickly, but don't expect to see much sea life. Be prepared that some of the most popular beaches are not accessible to buggies or wheelchairs. The pathway down the cliff to the beach is steep and rocky. The most accessible beach is Perissa which also has sun loungers to hire and local facilities. 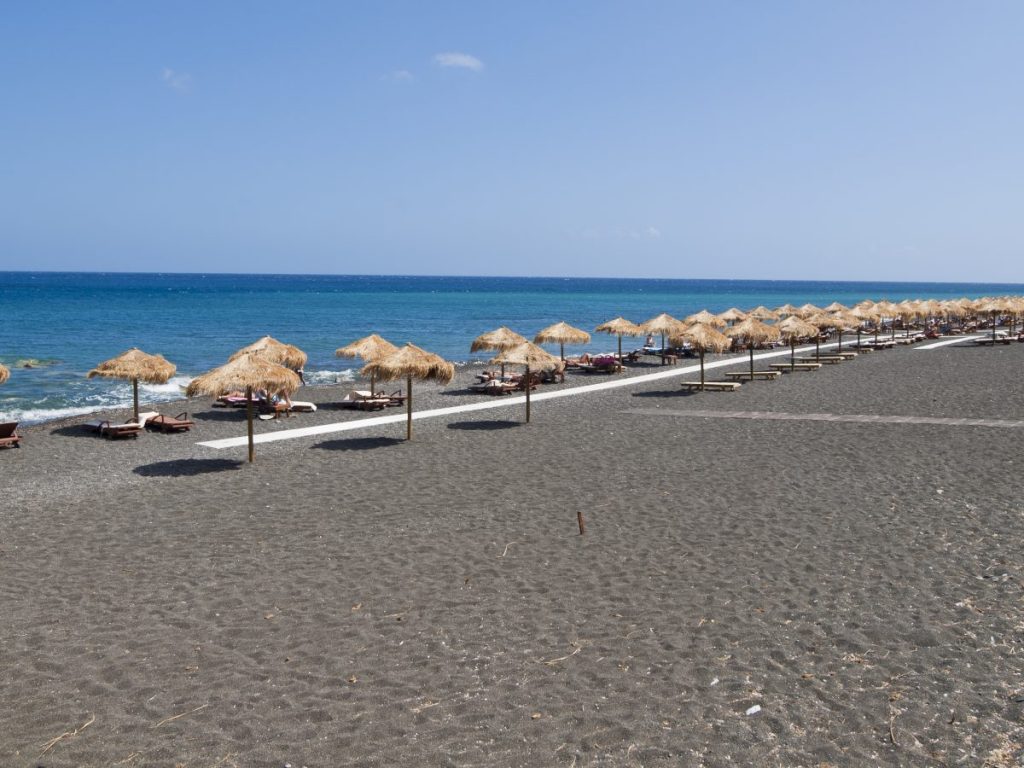 The Mediterranean diet is praised around the world for fresh flavors and numerous health benefits. In Greece, there are similar dishes across the mainland and the islands, but each region and often each family gives the dish their own special touch. There are so many dishes to try, but here are a few that should not be missed. Sfougato - a filling omelet with chunky fresh vegetables mixed inside. Fava me Koukia - made from locally grown fava beans this is a popular side dish similar to hummus. Greek Salad - the Santorini version uses the smaller local tomatoes mixed in with cucumber, black olives, and salty feta cheese. Spanakopita - great for a light lunch or a snack, this is feta cheese, and spinach filled pie of flaky filo pastry. Strapatsada - scrambled egg with fresh tomatoes and herbs. Melitinia - a local cheesy but sweet treat often seen at weddings. 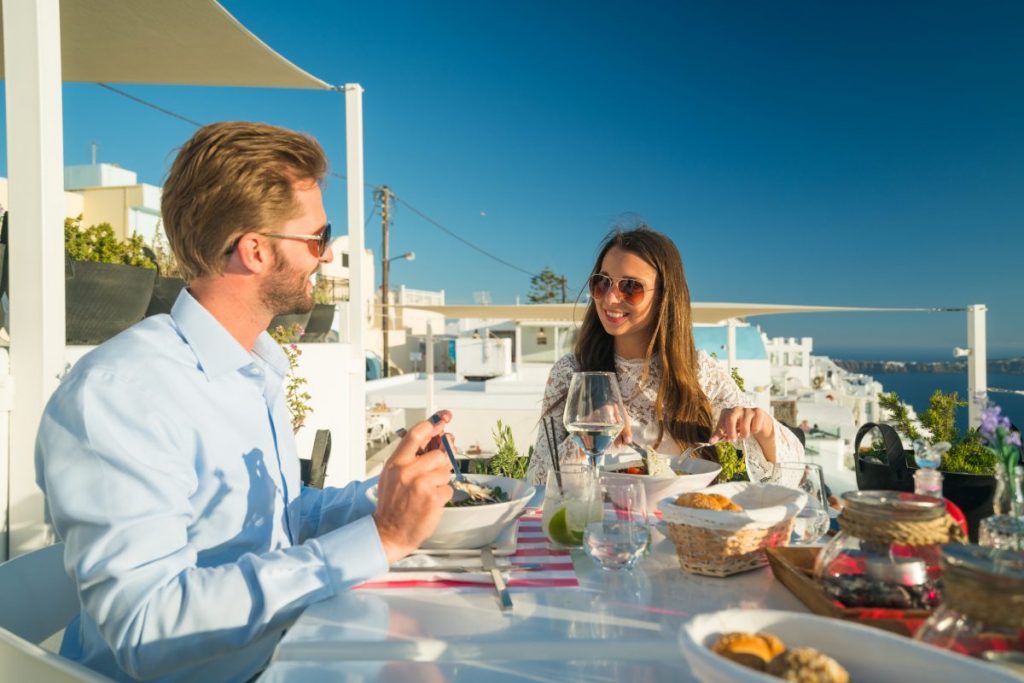 The nutrient-rich volcanic soil and warm climate are perfect for growing grapes. Santorini makes its own wine, which is often sweeter than most people are used to, but it complement the salty local cuisine perfectly. Santorini grows its own grape in the Assyrtiko variety. The vines are not much to look at and are completely different from the vineyards of France. They are very hardy and long-lived, grow close to the ground, and curl around in a circle. The only moisture they get is from dew that collects on the plants in the early morning. Try the local Vinsanto dessert wine found in every restaurant. It's a dark orange color with a sweet yet citrus flavor and made locally. 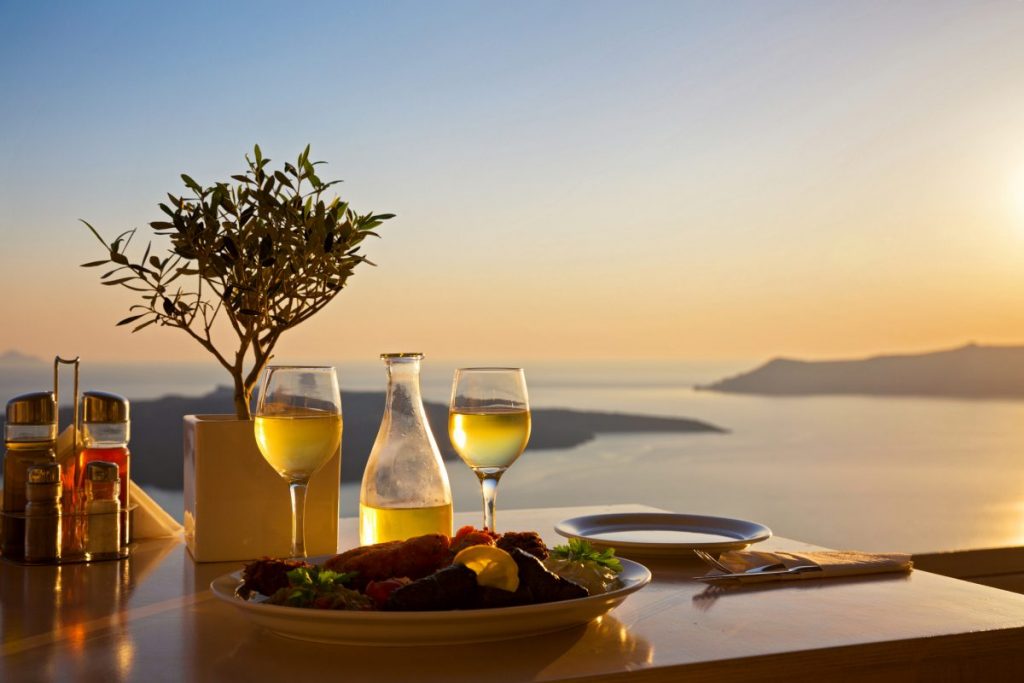 One of the most famous images of Santorini are the blue domed tops of the local churches. Churches on Santorini are often small cube-shaped buildings, with this iconic blue dome top. Religion is important to many people in Greece, and while visitors are welcome, it is important to remember you are visiting a church. Consider what you might wear into a place of worship in your own country and dress respectfully. Covering bare arms and legs is a good idea. Visitors are also welcomed to Holy Mass, which is similar to Catholic Mass. For those interested in seeing a Greek church on a grander scale, visit the Cathedral which sits near the caldera in Oia. 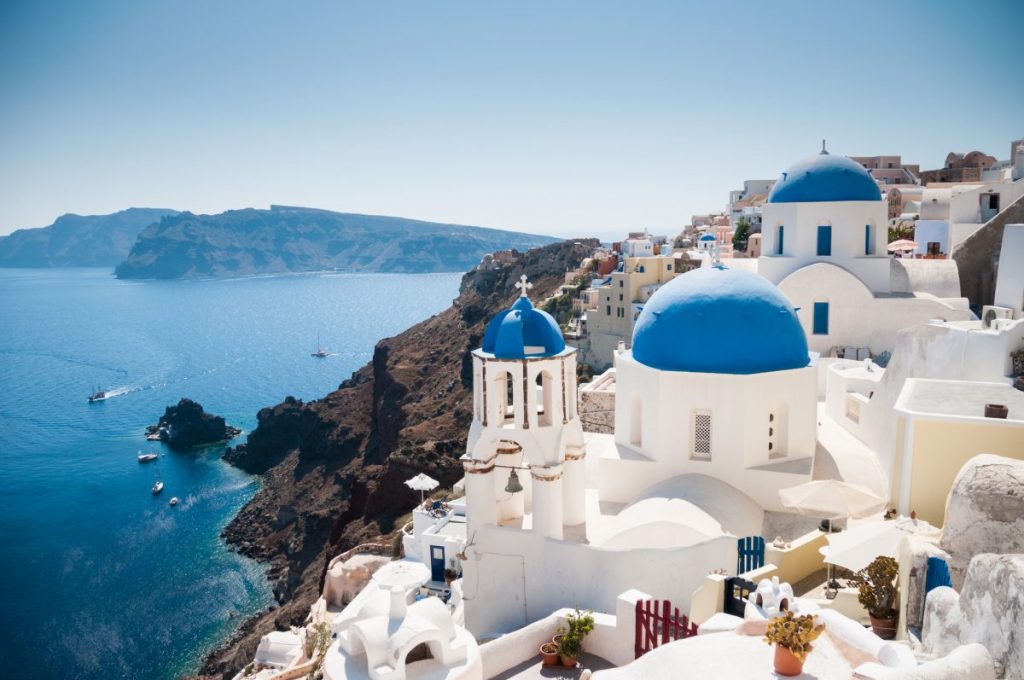 Fira is the largest town on Santorini and the base for most visitors. Starting at the edge closest to the caldera the quality of the restaurants and shops decrease as you move away from the crater edge. Places with a view of the sun setting across the sea charge a premium. All the main streets run parallel to the caldera and are joined by smaller side streets. There are plenty of jewelry shops with glittering gold and gems, but don't expect any bargains on Santorini. The cheaper shops offer the same tourist-focused items found everywhere in Greece and are the best place to buy inexpensive gifts for family at home. 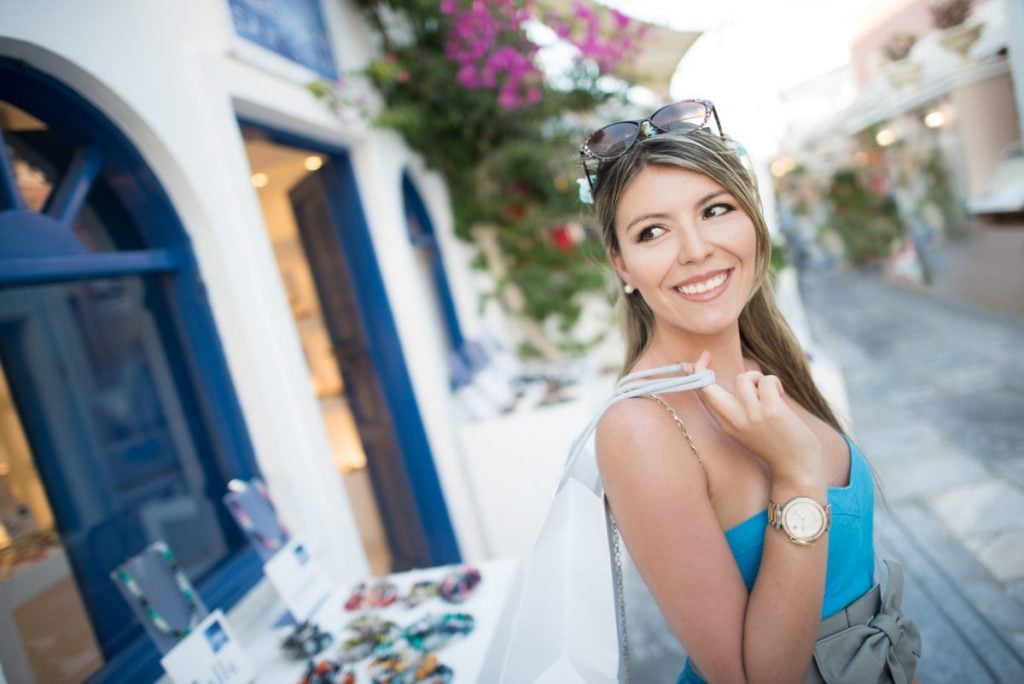 Hike Between Oia and Fira

The two main towns of Fira and Oia are connected by a trail along the caldera. Hikers can enjoy exploring the winding pathways with whitewashed houses and the occasional spray of pink bougainvillea flowers. Every now and then on the trail, there's a little shop selling art and crafts. There are also plenty of tavernas to stop for a drink or some food. If you want to visit shops or restaurants, avoid the hours between midday and 3 pm when many places close. Be sure to wear supportive shoes and stop to appreciate the view. 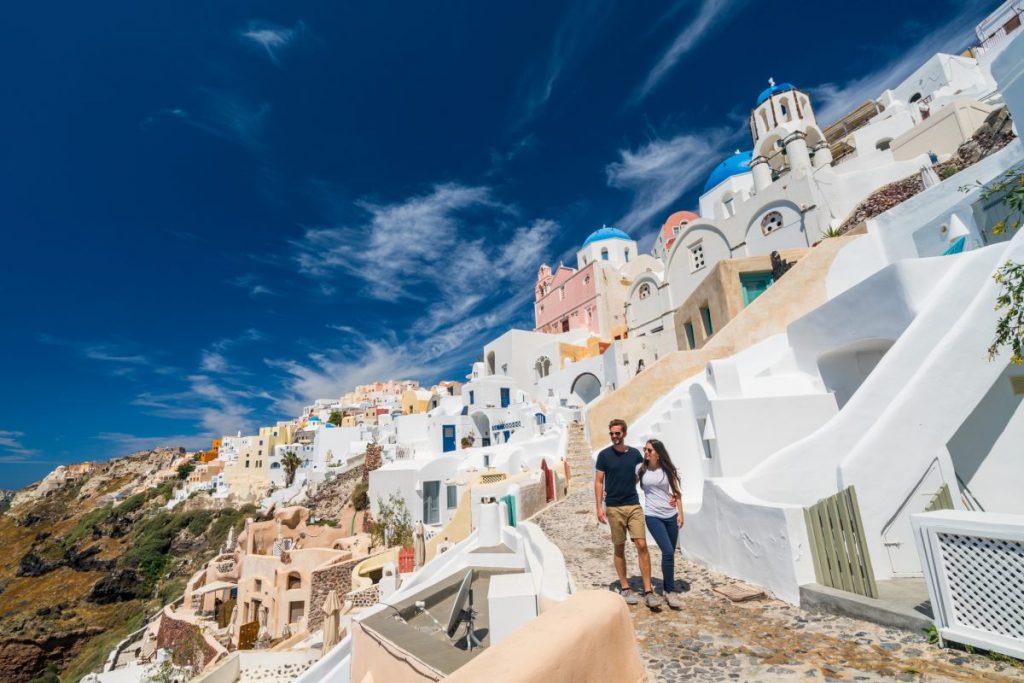 The caldera was formed when the magma chamber underground collapsed and filled in with sea water. The Santorini volcano is still active today, and in the centre of the caldera, a new island emerges from the waves. Don't expect to see any eruptions of lava on your visit, but you can go on a tour of the black islands and see steam rising from the ground. Anywhere you go on Santorini you will see evidence of the island's geology. Resist the urge to take souvenirs from the beaches or cliffs. With millions of visitors annually Santorini has a problem with people taking rocks home with them. Instead, there are local crafts made from Santorini rock which supports the island's economy, and limits the damage done by visitors. 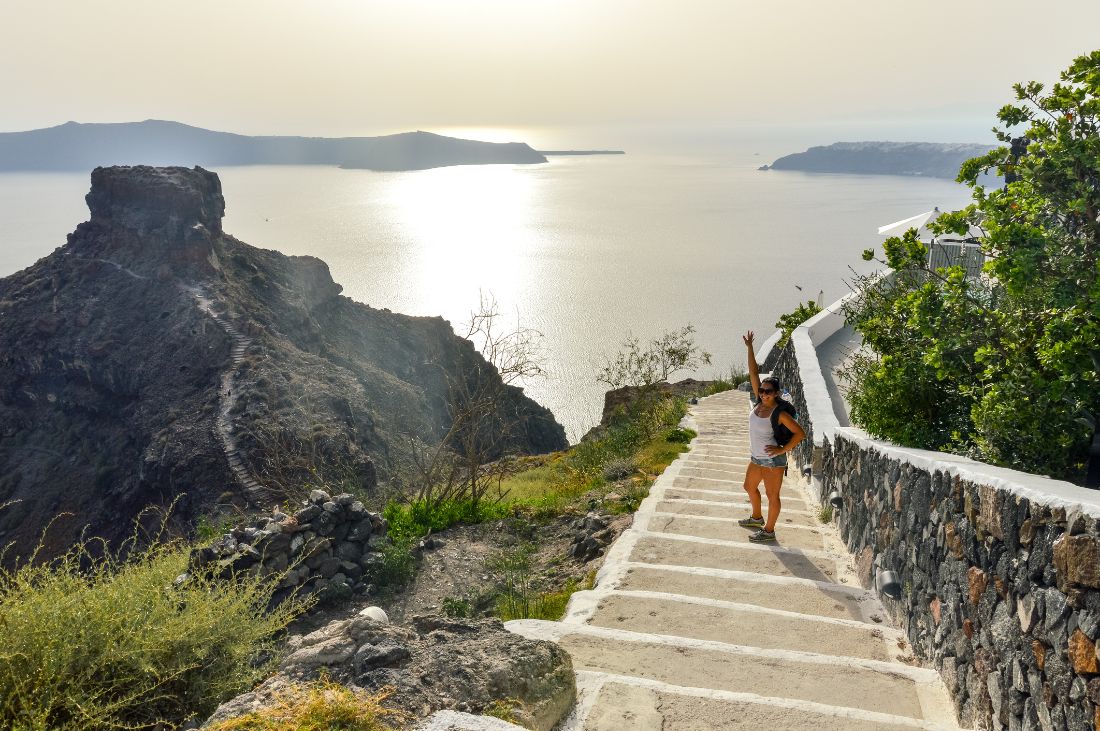 After walking up and down the narrow streets and steep hills of Santorini, your feet will ache. Luckily, Santorini has a flourishing local industry which aims to relax and rejuvenate people. Lucky tourists have a hotel with an infinity pool overlooking the caldera, but many hotels also have spas for non-guests to enjoy the facilities too. They might not be to everyone's taste, but Santorini also started the craze for fish-pedicures where tiny fish nibble the dead skin from your feet. Alternatively, there are plenty of boutique spas for a more traditional relaxing pedicure. 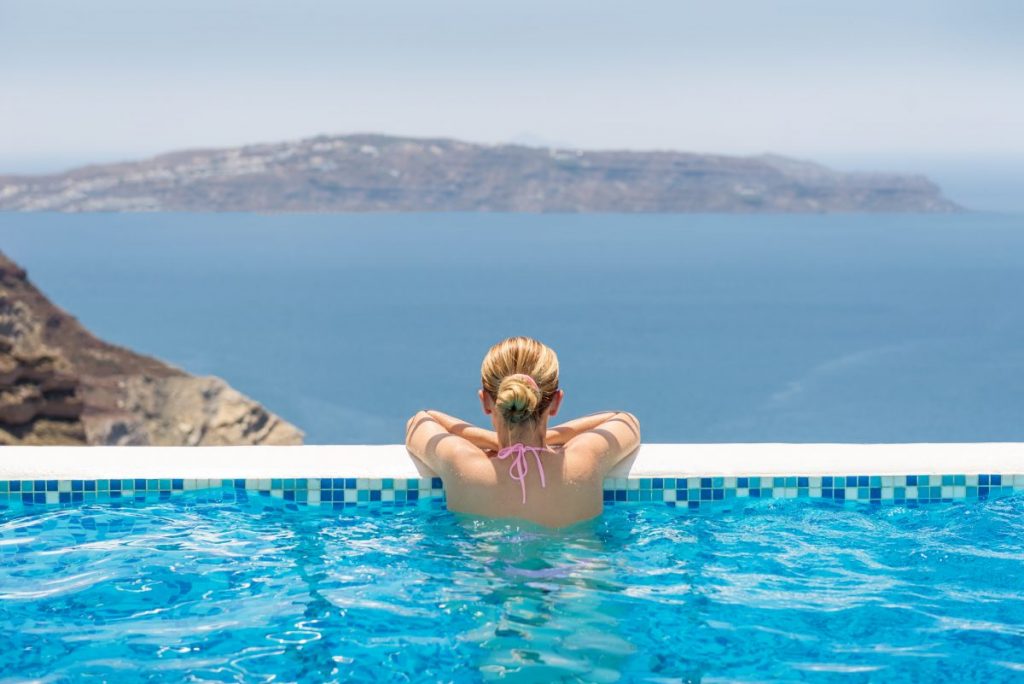