Beef up Your Dinner Game with Smoked Beef Brisket

Making a smoked beef brisket is intimidating, especially if you're a novice pitmaster. While it’s not impossible, you have to know what you’re doing, and that starts with planning ahead. Briskets aren’t a last-minute meal idea, and putting it all together may take more than a few tries, but the reward of a tender, juicy brisket is worth every effort. 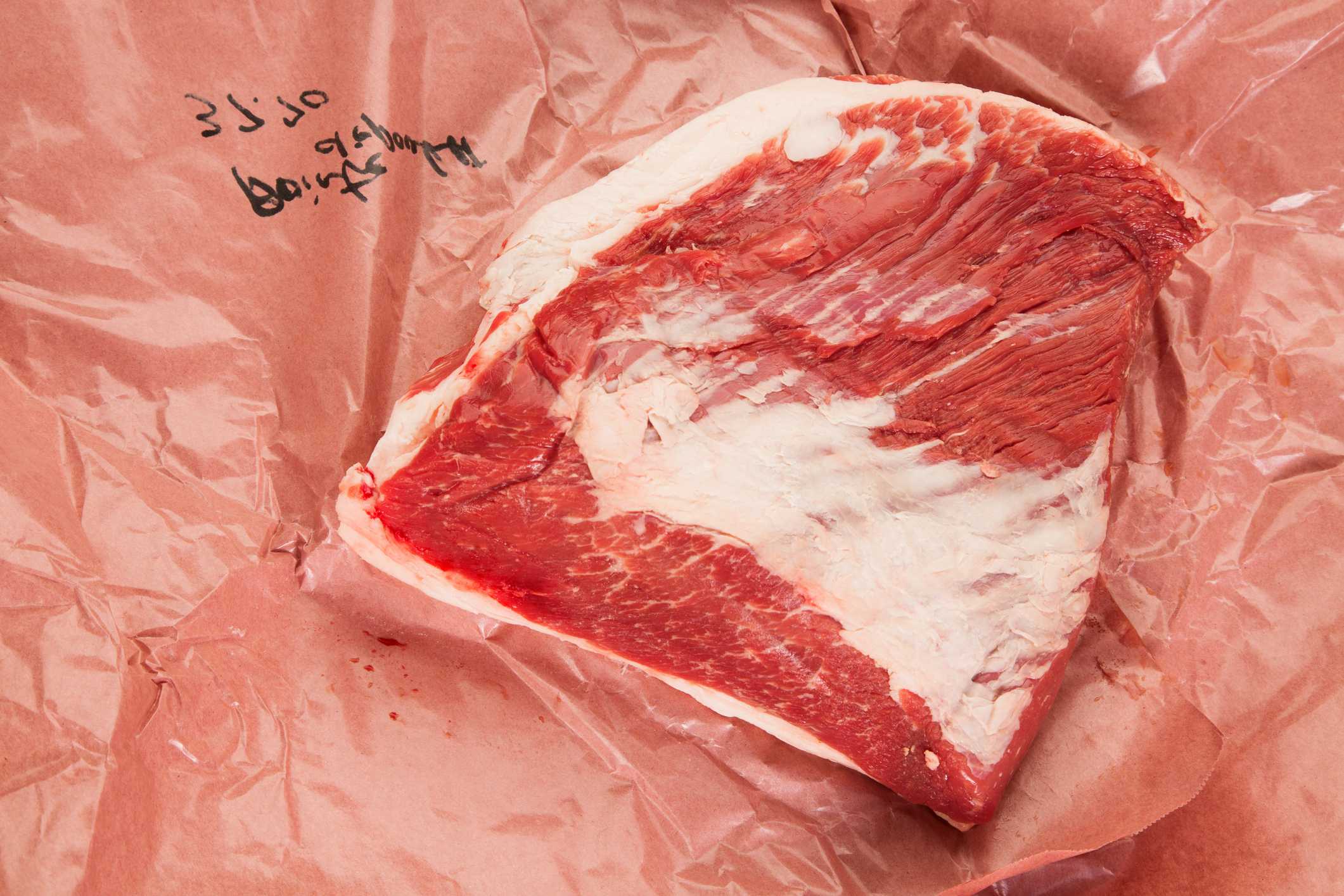 Trim some of the excess fat

To make a well-done brisket, start by carefully trimming the excess fat cap. Getting rid of too little fat impedes the curing process while cutting off too much leads to overcooking. After rinsing the cut, make long and shallow horizontal slices to the hard fat, trimming all around. Leave about a ¼-inch layer of fat on the meat to carry flavor. 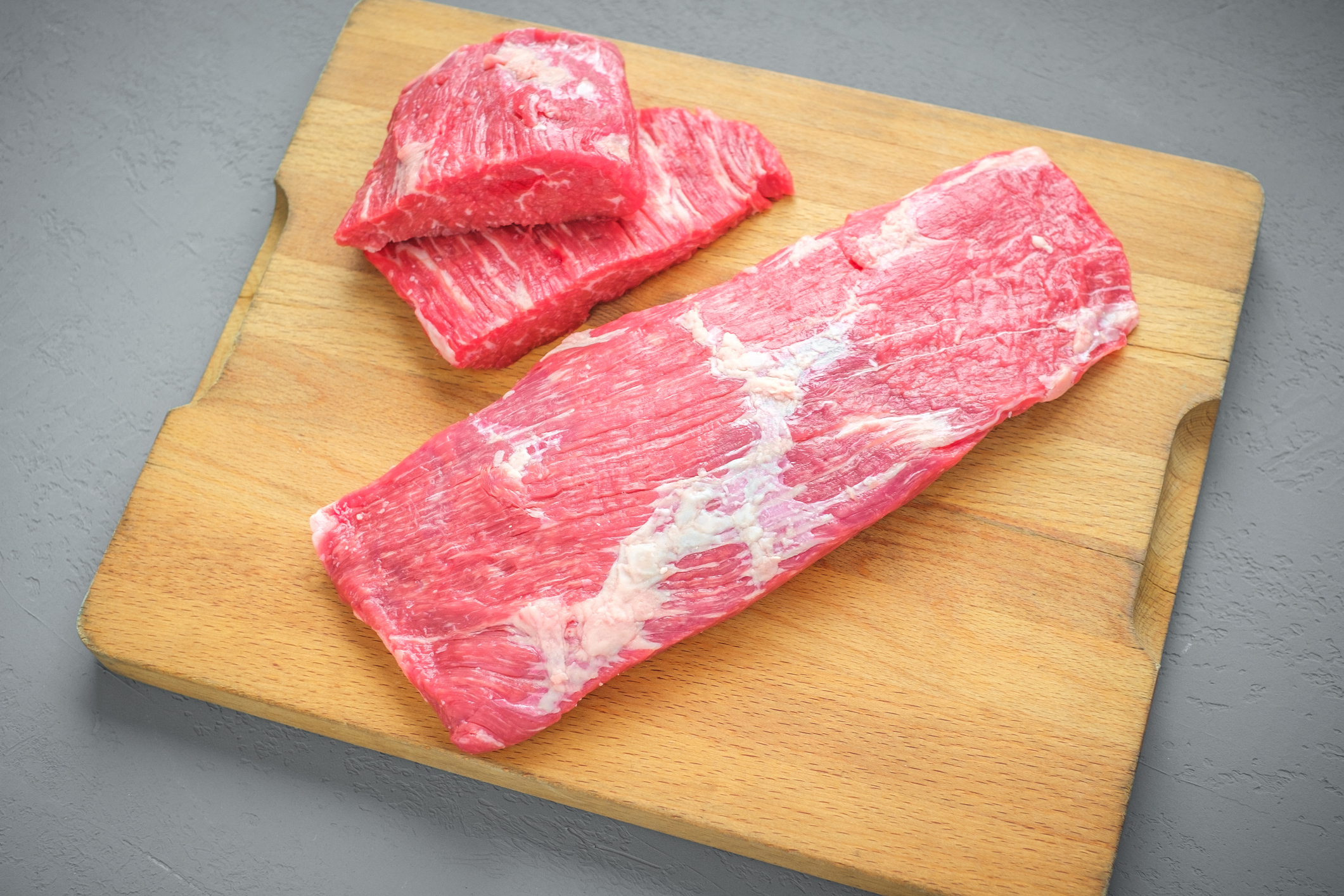 Apply oil as a binder for the dry seasoning. Use canola or olive oil, whichever is more convenient. There are plenty of dry seasonings on the market, but a brisket only requires coarse salt, pepper, and garlic powder. Pat the seasoning on the oiled meat and let it sit for an hour before putting it in the smoker. 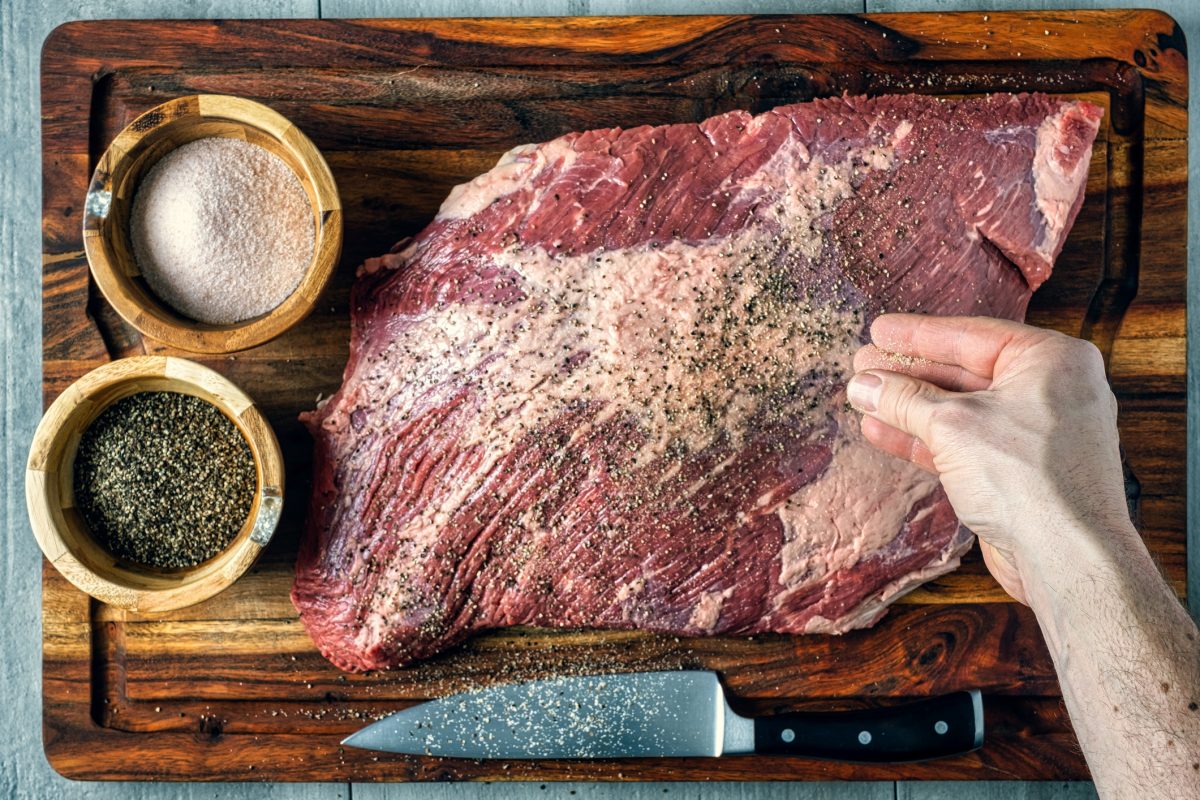 Smoke it low and slow

Beef brisket is a tough cut of meat, which is why it requires a low-and-slow process. Preheat the smoker to 215 or 225 degrees Fahrenheit. When ready, place your meat fattier side up. For a full brisket of between 12 and 14 pounds, the smoke time is approximately 15 or 16 hours, which averages out to a little more than an hour per pound. If you have just a flat cut that's between 7 and 9 pounds, smoke time will be roughly 7.5 to 10 hours. 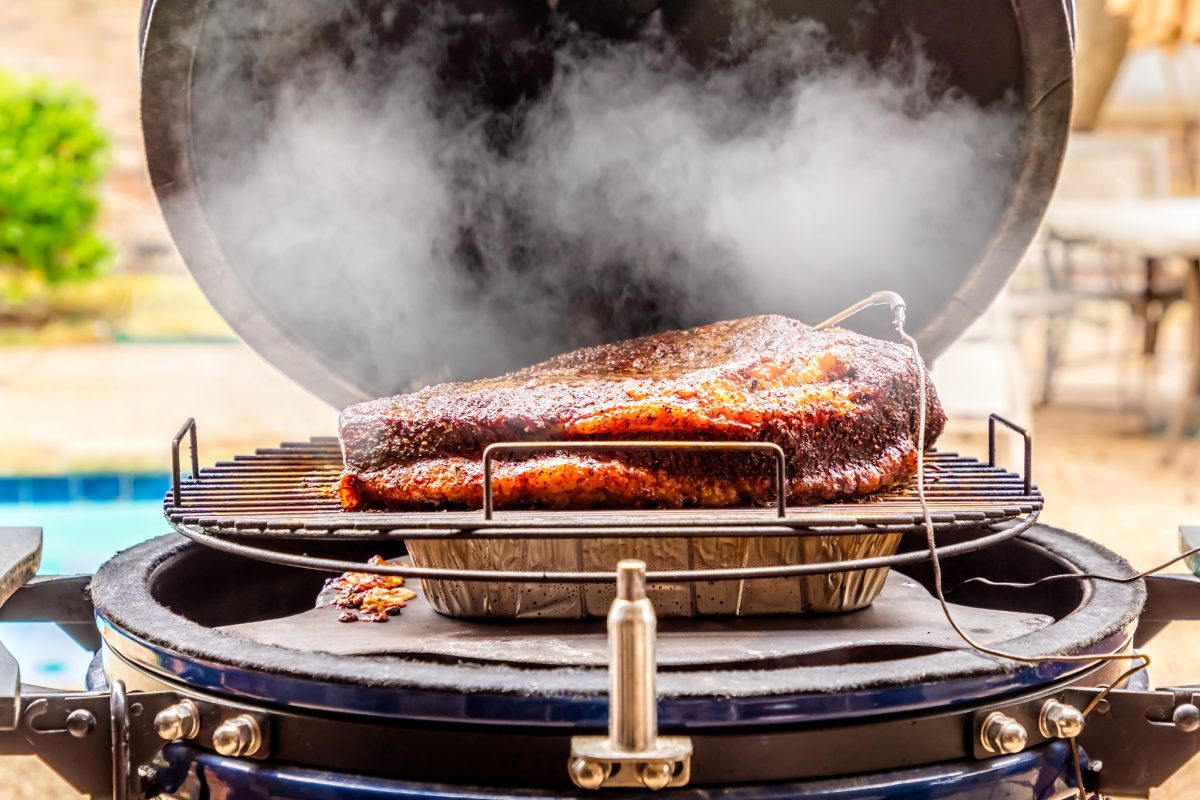 Wrap your brisket when it is halfway done cooking, with a temperature of about 165 degrees Fahrenheit at the thickest part. One convenient wrapper is butcher paper because it's great at keeping the moisture in the meat while allowing smoke to penetrate. Wrap the meat tightly, then place it back in the smoker, fattier side down. Smoke for the remaining hours until it reaches a temperature of about 202 degrees Fahrenheit, and the meat is tender. 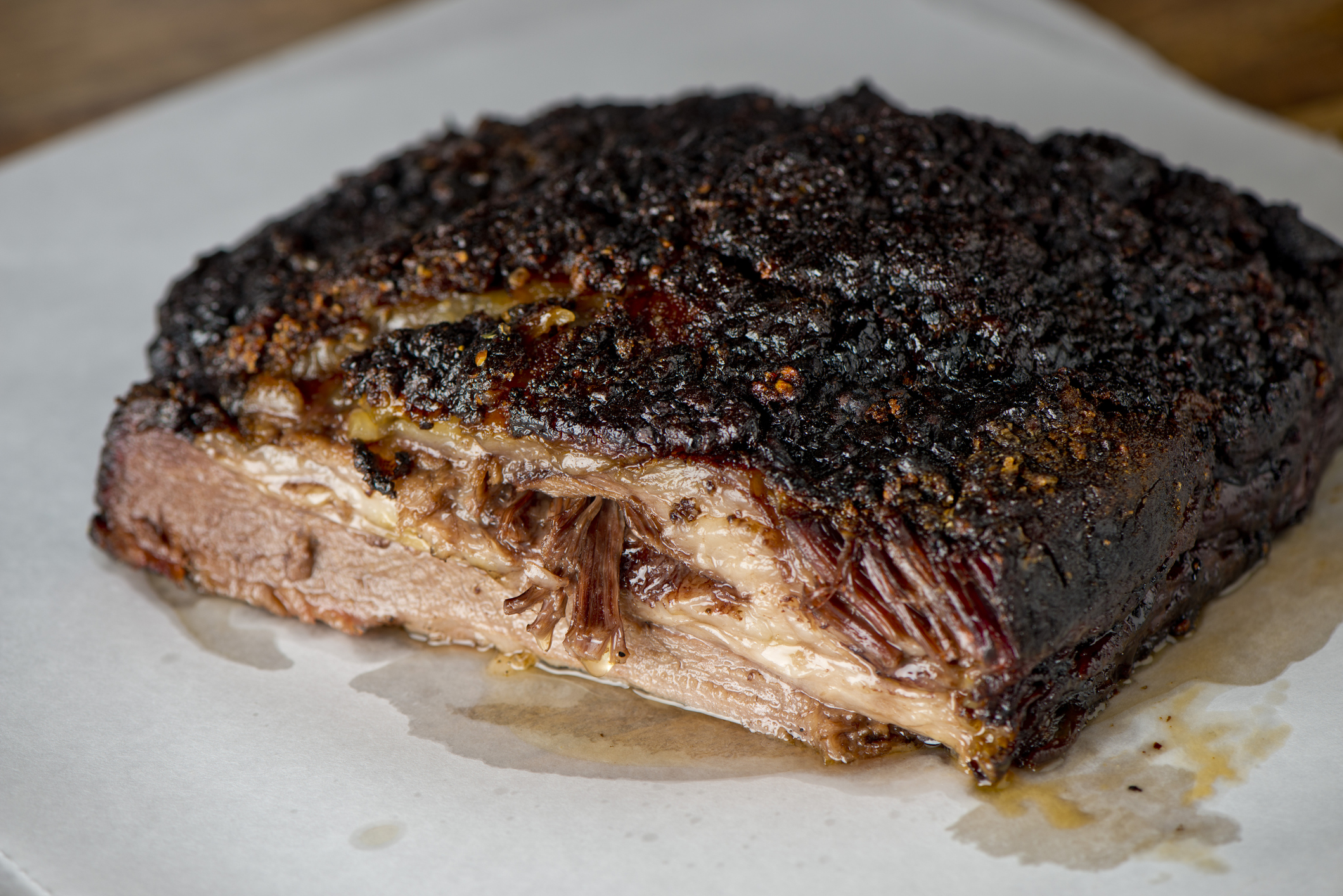 Watch out for the stall

Brisket stall happens when the temperature plateaus or even drops, compromising the cooking process. This starts at around 160 degrees Fahrenheit when the collagen begins gelatinizing. The reason is that the melting fat evaporates and cools the rising temperature, just like the body cools itself with sweat. This is the reason why you wrap your meat at the half-way point with butcher paper or foil and return it fat side down. This creates an oven within an oven. 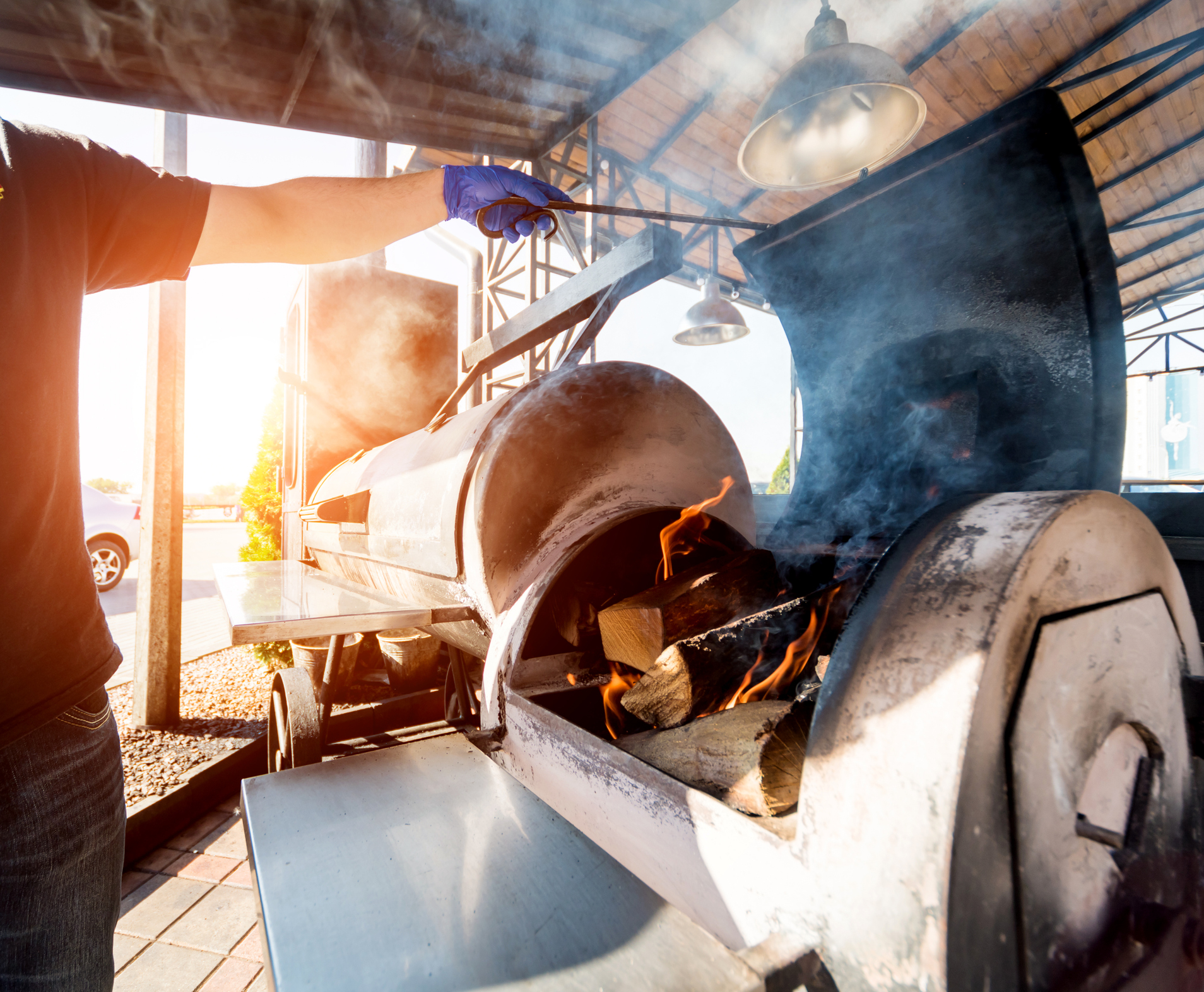 Once the brisket is done and has hit 202 or 203 degrees Fahrenheit, it needs to rest so the juices and meat can settle. If the brisket is ready to eat, just place it on the counter and let it sit for about 45 minutes. However, if the brisket is finished cooking before you're ready to eat, place the wrapped meat on top of a towel inside a cooler. This ensures that not only is it still moist, but it holds the temperature a bit longer before slicing. 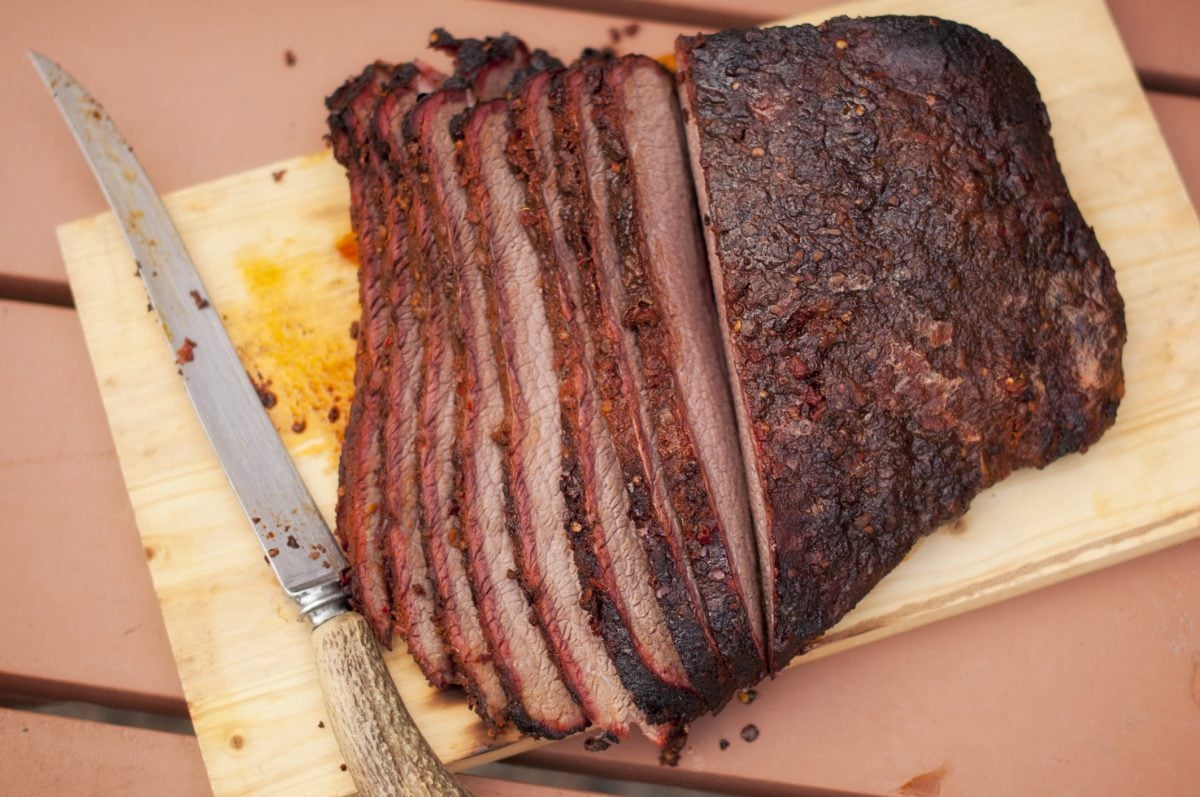 Tips for slicing and serving

When cutting brisket, it’s necessary to go against the grain so the meat doesn’t collapse. With the full brisket, there's a fatty layer that indicates a shift in the grain between the flat and the point cuts. Cut the meat in half and turn the point cut perpendicular to the flat piece. Typically, you cut the flat piece into pencil-thick slices starting from the narrow edge, until you reach the cut edge. Serve on a tray with your favorite barbecue sauces. 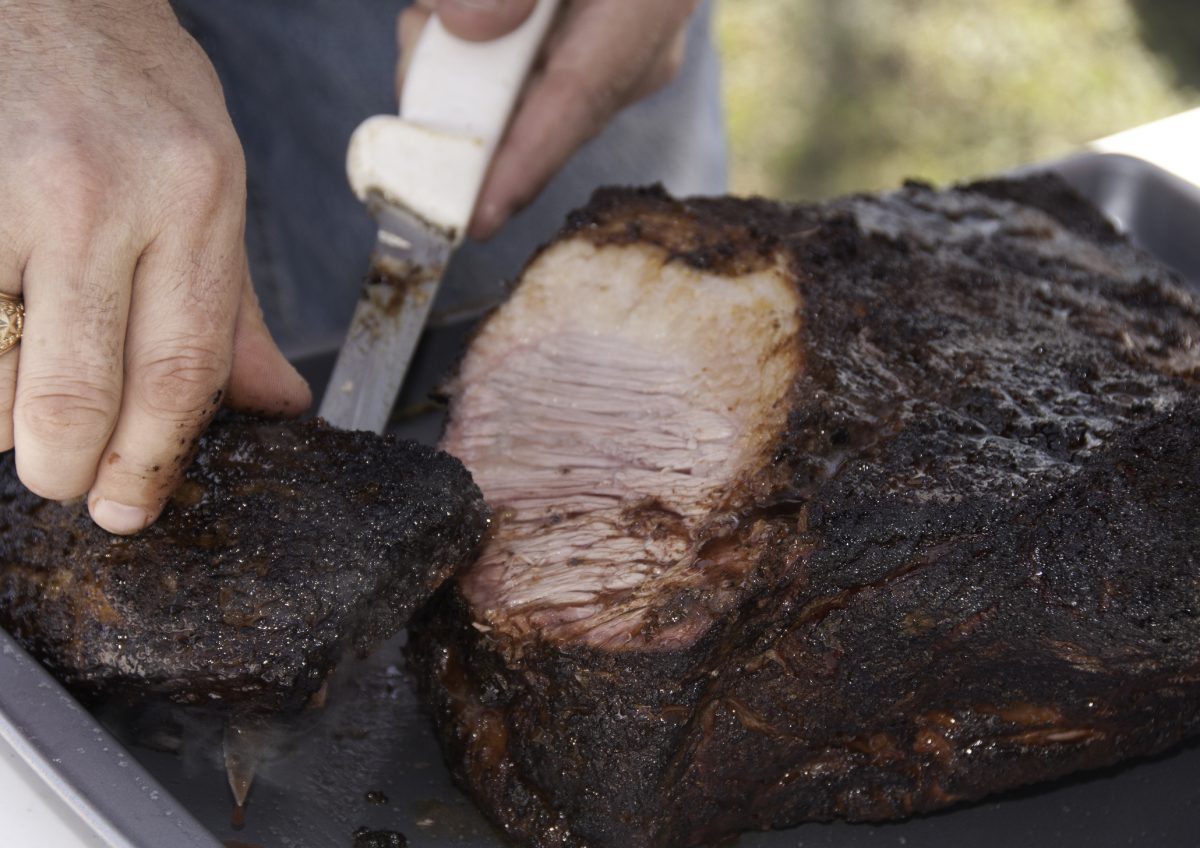 One of the most common mistakes is not buying enough brisket for everyone. The rule of thumb is to plan for 0.5 pounds of raw brisket per person. This means that a 5- or 6-pound brisket feeds about ten guests. Another mistake is not cooking the brisket long enough. Here’s the fix: after you take it out of the smoker, let it sit. Place the whole meat in a tightly covered dish with its juices in the fridge overnight. The next day, slice it up then bake it in a covered dish your choice of sauce for about an hour. 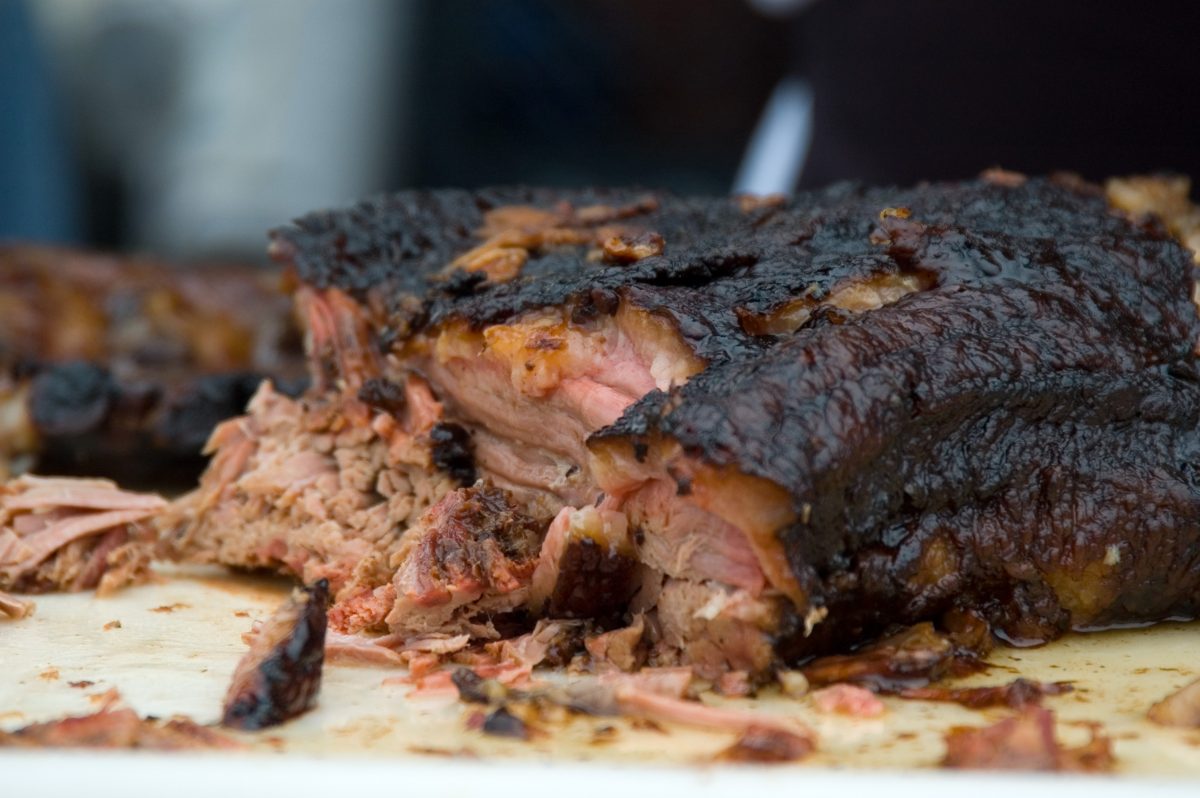 When smoking beef brisket, stick with hardwoods. Hickory and oak are staples for smoking and barbecuing. Hickory, in particular, imparts that bacon-like flavor, which is always good when it comes to meat. Mesquite adds spice to the mix when combined with hickory or oak. For more sophisticated flavors, like natural sweetness, add a few apple or maple chips to the base. 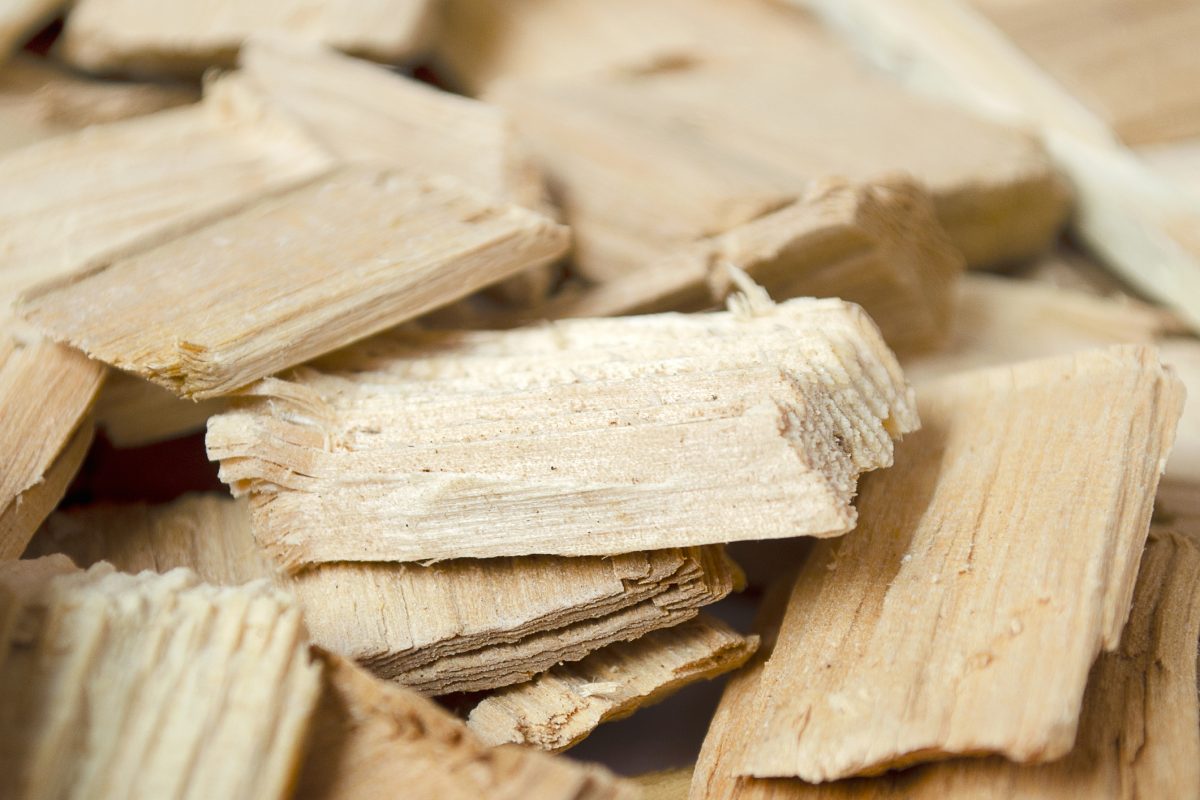